Shipwreck lifeboat washes up in Australia, after about 6,000 miles of drift

In a surprising find, a fisherman has stumbled across a ship wreck lifeboat along The Coorong, almost two years after it was lost at sea. 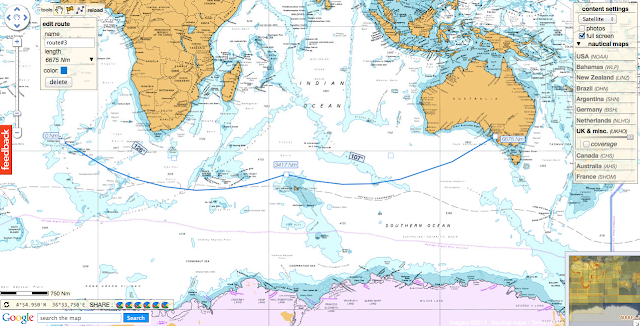 The location of the Nightingale Islands (left point) in comparison to the Coorong, South Australia (right point), where the lifeboat was found :
difficult to imagine the real directions between the two locations
during this long drift with the prevailing currents.
A study of these prevailing currents show that, having drifted south of the Cape of Good Hope, it would be likely that the lifeboat would have drifted southwards, before either heading towards Southern Australia, or being sucked into the anti-clockwise current circulation in the Southern Indian Ocean. Theoretically it could have floated around this system more than once.
Others may argue that, like the Wandering Albatrosses, the lifeboat may have tracked further south, and continued beyond the south of New Zealand, into the Pacific, following an almost continuous easterly drift of ocean currents around the Southern Ocean, eventually passing Cape Horn, back into the Atlantic, passing South of the Cape of Good Hope again...and hence to South Australia.
Any other ideas?
A lifeboat has washed ashore in Australia from a ship that ran aground in the middle of the South Atlantic Ocean almost two years ago.
The lifeboat from the bulk carrier Oliva floated about 12,000 kilometres from Nightingale Island to a beach at the Coorong wetlands near the mouth of the Murray in South Australia.

The ship's crew of more than 20 was rescued after the maritime accident in March 2011, which caused a big oil spill.
The Oliva had been sailing from Brazil to China.
It broke up two days after the accident, the forward section drifting off.
The aft section of the bulk carrier capsized and sank. (see video)

Nick Balmer, from Victor Harbor, just west of the Coorong, spotted the lifeboat when he went fishing and said it was in good condition considering its long journey.
"The seats inside are torn up so, you know, the chances are it's probably been sitting on other beaches around the world maybe, you know, and people have sort of trashed it inside a bit," he said.
"The lifejacket was out on the beach down the Coorong there so we're not the first person to find it."

The South Australian Transport Department said it was unsure what to do with the 6.8-metre lifeboat.
Official Joe Rositano said departmental staff were travelling to the beach near Salt Creek and planned to ensure the boat could not wash back out to sea.
"What we're going to make sure is that it actually doesn't become a navigation hazard again," he said.
"What we're going to look at doing is perhaps anchoring it initially because the thing weighs, without the water in it it's a couple of tonnes, so it's not an easy thing to move."
Posted by Peio at 1:31 AM