Sea urchin nickel 'trick' could be key to capturing carbon

Could the sea urchin hold the key to carbon capture?

Researchers say that the natural ability of sea urchins to absorb CO2 could be a model for an effective carbon capture and storage system.

Newcastle University scientists discovered by chance that urchins use the metal nickel to turn carbon dioxide into shell.
They say the technique can be harnessed to turn emissions from power plants into the harmless calcium carbonate.
The research is in the journal, Catalysis Science and Technology.
Many sea creatures convert carbon dioxide in the waters into calcium carbonate which is essentially chalk.
Species such as clams, oysters and corals use it to make their shells and other bony parts. 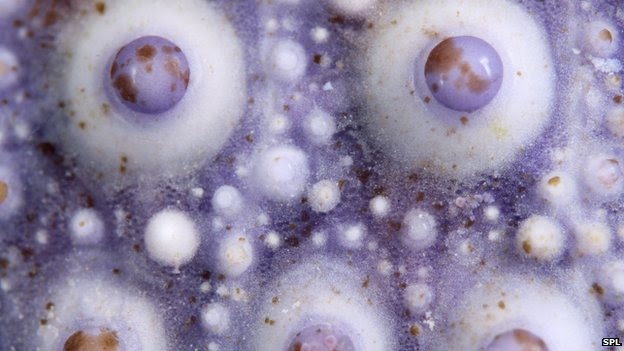 When the team at Newcastle looked at the larvae of sea urchins they found that there were high concentrations of nickel on their external skeletons.
Working with extremely small nickel particles, the researchers found that when they added them to a solution of carbon dioxide in water, the nickel completely removed the CO2.
"It is a simple system," Dr Lidija Siller from Newcastle University told BBC News.
"You bubble CO2 through the water in which you have nickel nanoparticles and you are trapping much more carbon than you would normally - and then you can easily turn it into calcium carbonate."
"It seems too good to be true, but it works," she added.

An X-ray of a sea urchin embryo shows lots of blue which indicates calcium carbonate
At present most carbon capture and storage (CCS) proposals are based around the idea of capturing CO2 from electricity generating stations or chemical plants and pumping the stripped out gas into underground storage in former oil wells or rock formations.

But there are still question marks about the possibility that the stored carbon may leak back out again.
The Newcastle researchers say that an alternative approach would be to lock up the CO2 in another substance such as calcium carbonate or magnesium carbonate.
This can already be done by using an enzyme called carbon anhydrase but it is very expensive.
PhD student Gaurav Bhaduri who is the lead author on the research paper explained that using nickel would be a far more economic option.

The dominant technology is still the oldest - absorption of carbon dioxide by liquid amines
"The beauty of a nickel catalyst is that it carries on working regardless of the pH and because of its magnetic properties it can be re-captured and re-used time and time again," he said.
"It is also very cheap, a thousand times cheaper than carbon anhydrase. And the by-product - the carbonate - is useful and not damaging to the environment."
Calcium carbonate is said to make up 4% of the earth's crust.