1650 Jansson Wind Rose, Anemographic Chart, or Map of the Winds 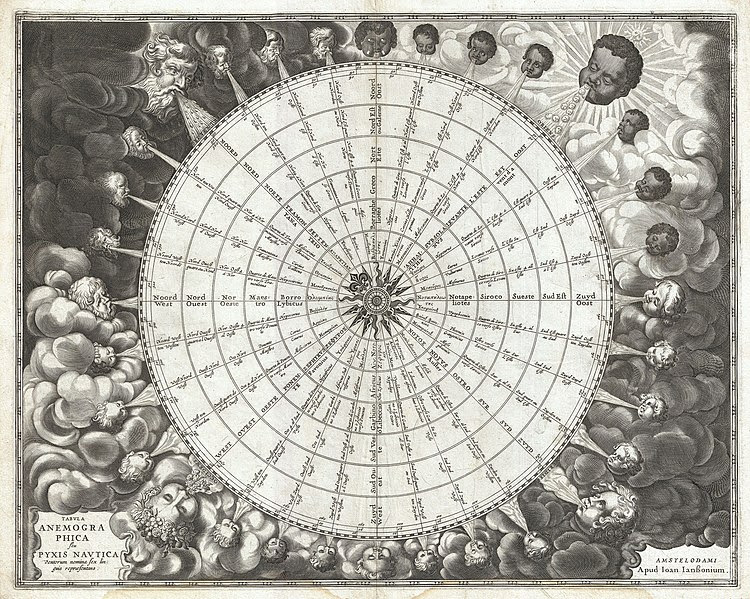 An exceptionally rare example of one of the earliest and most significant anemographic, or wind rose, charts to appear in the 17th century.
This unusual chart represents a transitional point in the perception of direction, or to be precise, the transition from the wind rose to the compass rose.

Early mariners in the Mediterranean defined direction by the names the various winds and the points from which they blew.
This idea traces its roots to ancient Greece.
Homer identified four cardinal winds, but as navigation and cartography advanced, more were added. This chart represents a full thirty-two named winds and a multitude of different wind systems.
Each of the winds is identified by several different names in Greek, Latin, French, and Dutch.
Each wind is additionally attached to both contemporary compass points, north west east and south, and a more sophisticated circle and degree system.
In the areas surrounding the sphere, each wind is personified by a figure bearing the racial characteristics associated with the region or direction represented.
The upper left quadrant, representing north, depicts bearded Germans or Scandinavians.
The upper right, representing east, shows beardless dark skinned faces.
The beardless and pale skinned figures in the lower left and right, representing west and south, are less distinguishable but may be intended to represent indigenous Americans and Greeks.

Anemographic charts, like this, were functional objects and valuable reference tools.
Early navigators, referring to the directions as winds, might "sail by the north wind".
This was exceptionally practical when trade winds dictated ocean commerce.
A warm wind from the south, for example might suggest that certain routes, closed for part of the year, were now open.
A navigator would have used this chart to compare different names for directions.
So, he may be using a chart made in Greece that identified the winds by the names of Greek gods, but himself been trained to use to a different, say Catalan or English, nomenclature.
With this chart, he could figure out what various sailing logs and navigation books were referring to. Remember, while nautical charts did exist in the 1600s, most navigation was accomplished using "Pilot Books" that had instructions like this "follow the south wind for 3 days before turning with the eastern wind" etc.
Thus this was a very useful object indeed.

This chart was published as plate 1 in Jansonnius' 1650 Atlas Maritimus or volume 5 in his Atlantis Majoris
Posted by Peio at 1:09 AM