For the first time in the history of modern Russia, three nuclear-powered submarines of the Navy surfaced together in the ice.
The Commander-in-Chief of the Navy, Admiral Nikolai Evmenov, reported this to the Supreme Commander-in-Chief of the Armed Forces Vladimir Putin.
According to Evmenov, the ice was one and a half meters thick.
The submarines surfaced "according to a single concept and plan at the appointed time in an area with a radius of 300 meters."
One of the nuclear missile carriers conducted practical torpedo firing.
After the launch, the torpedo was raised to the surface in a specially equipped hole. 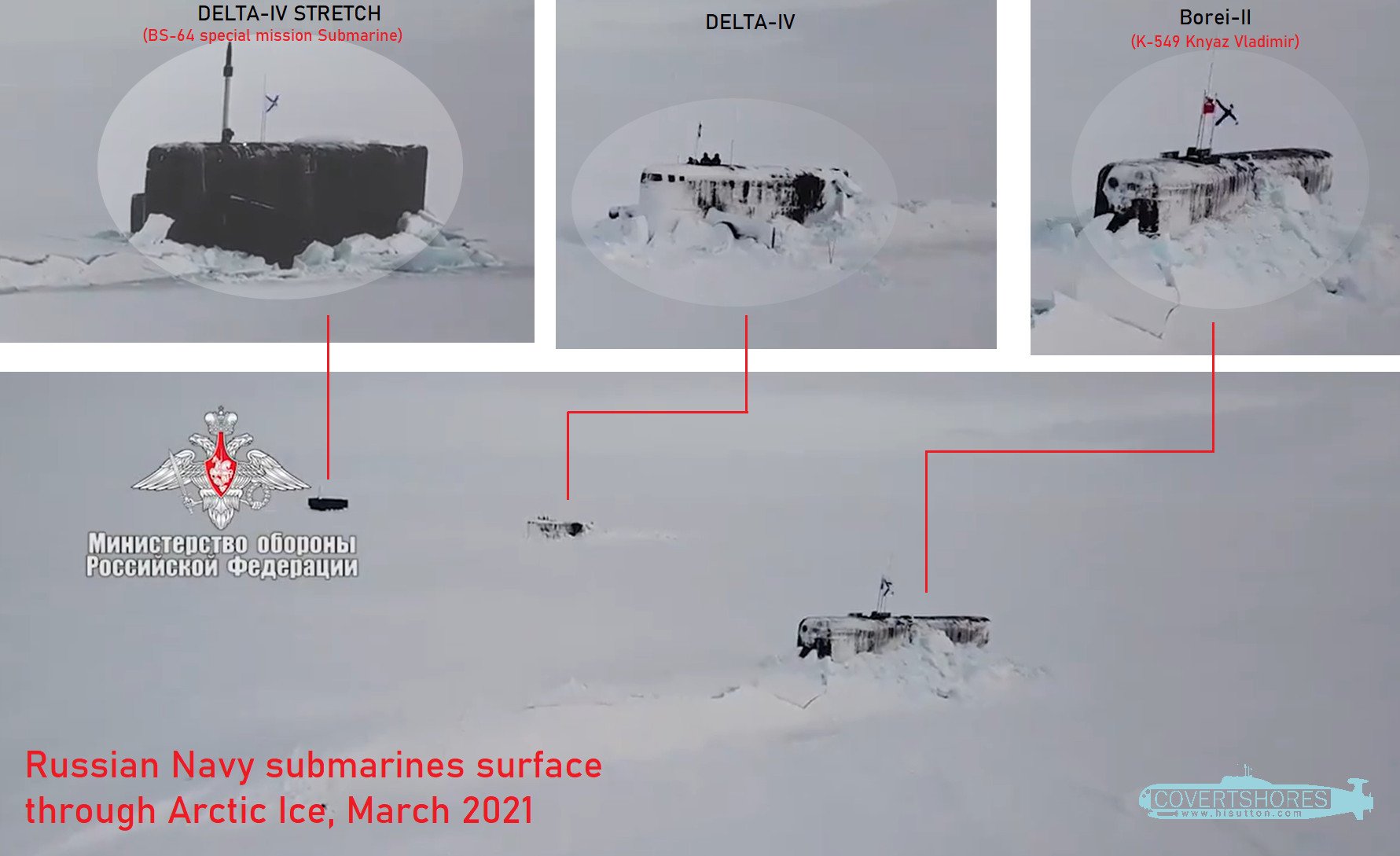 The three Russian submarines which surfaced near North Pole were 1 x spy submarine and 2 x Ballistic Missile subs (one DELTA-IV and a Borei-II).
see HiSutton 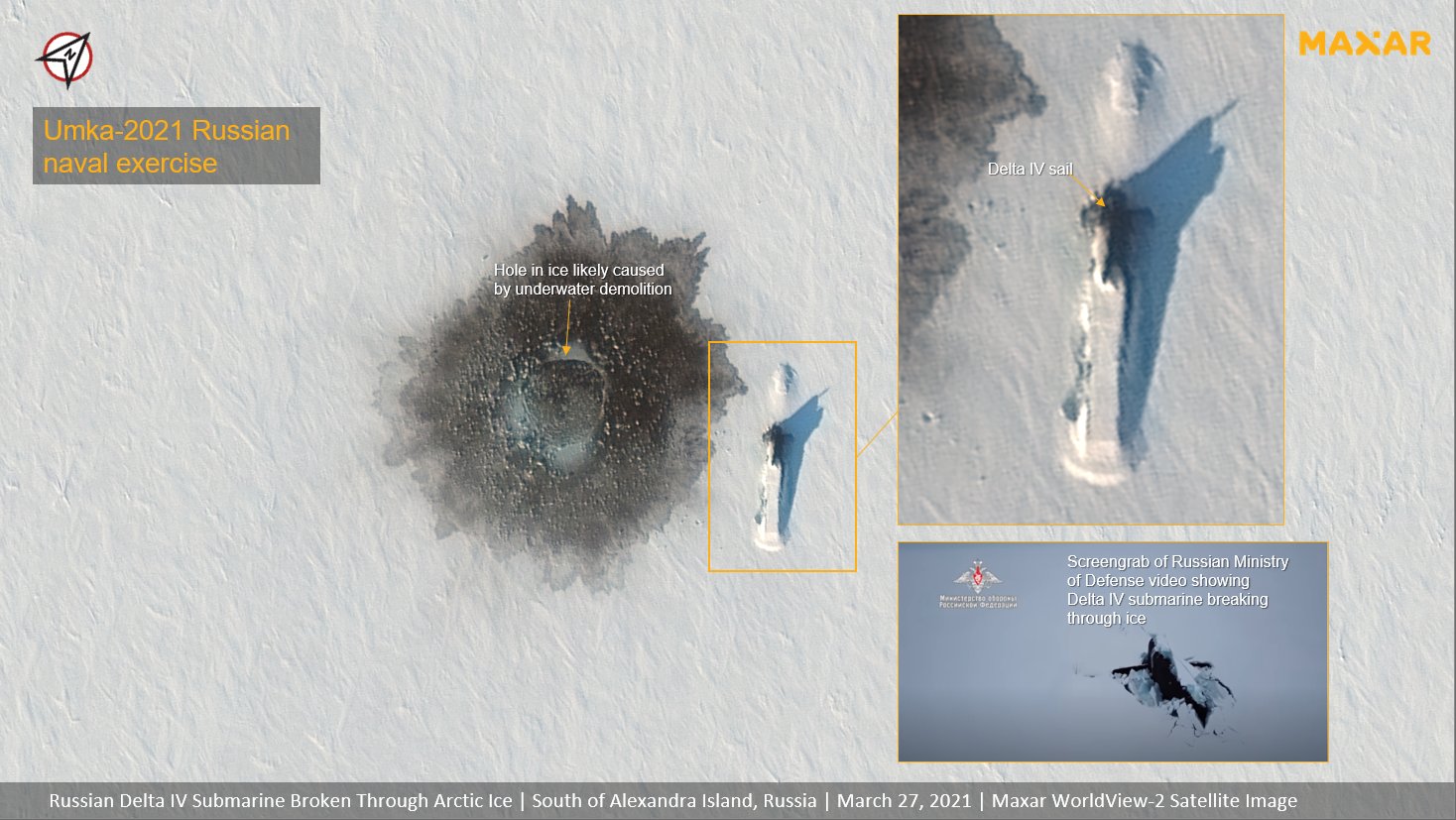 The Umka-21 Arctic expedition has been conducted since March 20 under the leadership of the main command of the Navy.
As the president noted, it has no analogues in Soviet and modern Russian history.
He added that during the expedition they confirmed "the high combat capabilities of domestic weapons, their reliability in operation in extreme conditions."
In total, Umka-21 involved more than 600 military and civilian personnel, about 200 types of weapons, military and special equipment.
In the area of ​​the expedition, the average temperature is minus 25-30 degrees Celsius, wind gusts reach 32 meters per second.
translated from Ria article (26/03/2021)
This is about submerged transit to the North Pole on 3 August 1958 breaking through the ice from the bottom.
Because her special propulsion allowed her to remain under far longer than diesel-electrics, she broke many records in her first years of operation, and traveled to locations previously beyond the limits of vessels.
From MaritimeCyprus

On August 3, 1958, the U.S. nuclear submarine Nautilus accomplishes the first undersea voyage to the geographic North Pole.
The world’s first nuclear submarine, the Nautilus dived at Point Barrow, Alaska, and traveled nearly 1,000 miles under the Arctic ice cap to reach the top of the world.
It then steamed on to Iceland, pioneering a new and shorter route from the Pacific to the Atlantic and Europe.

The USS Nautilus was constructed under the direction of U.S. Navy Captain Hyman G.
Rickover, a brilliant Russian-born engineer who joined the U.S. atomic program in 1946.
In 1947, he was put in charge of the navy’s nuclear-propulsion program and began work on an atomic submarine.
Regarded as a fanatic by his detractors, Rickover succeeded in developing and delivering the world’s first nuclear submarine years ahead of schedule.
In 1952, the Nautilus’keel was laid by US President Harry S. Truman, and on January 21, 1954, first lady Mamie Eisenhower broke a bottle of champagne across its bow as it was launched into the Thames River at Groton, Connecticut.
Commissioned on September 30, 1954, it first ran under nuclear power on the morning of January 17, 1955.

Much larger than the diesel-electric submarines that preceded it, the Nautilus stretched 319 feet and displaced 3,180 tons.
It could remain submerged for almost unlimited periods because its atomic engine needed no air and only a very small quantity of nuclear fuel.
The uranium-powered nuclear reactor produced steam that drove propulsion turbines, allowing the Nautilus to travel underwater at speeds in excess of 20 knots.
In its early years of service, the USS Nautilus broke numerous submarine travel records and on July 23, 1958, departed Pearl Harbor, Hawaii, on “Operation Northwest Passage”—the first crossing of the North Pole by submarine.
There were 116 men aboard for this historic voyage, including Commander William R. Anderson, 111 officers and crew, and four civilian scientists.
The Nautilus steamed north through the Bering Strait and did not surface until it reached Point Barrow, Alaska, in the Beaufort Sea, though it did send its periscope up once off the Diomedes Islands, between Alaska and Siberia, to check for radar bearings.
On August 1, the submarine left the north coast of Alaska and dove under the Arctic ice cap.

The submarine traveled at a depth of about 500 feet, and the ice cap above varied in thickness from 10 to 50 feet, with the midnight sun of the Arctic shining in varying degrees through the blue ice.
At 11:15 p.m. EDT on August 3, 1958, Commander Anderson announced to his crew: “For the world, our country, and the Navy—the North Pole.” The Nautilus passed under the geographic North Pole without pausing.
The submarine next surfaced in the Greenland Sea between Spitzbergen and Greenland on August 5.
Two days later, it ended its historic journey to Iceland.
For the command during the historic journey, US President Dwight D. Eisenhower decorated Anderson with the Legion of Merit.

After a career spanning 25 years and almost 500,000 miles steamed, the Nautilus was decommissioned on March 3, 1980.
Designated a National Historic Landmark in 1982, the world’s first nuclear submarine went on exhibit in 1986 as the Historic Ship Nautilus at the Submarine Force Museum in Groton, Connecticut.