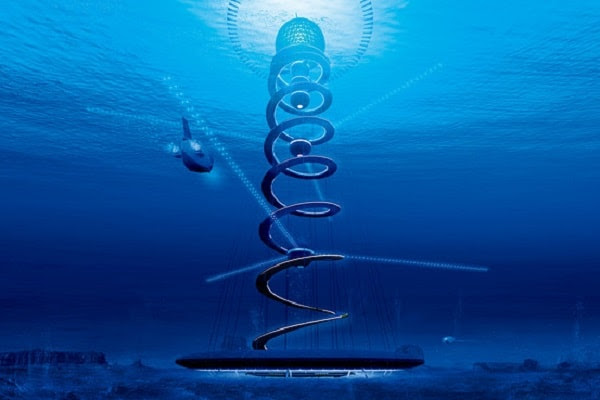 Illustration of the whole complex,
from the sphere just beneath water's surface to the research station beneath the seabed.
(Shimizu Corp.)

It's the next frontier: Not long after scientists landed a probe on a comet millions of miles away in deep space, a Japanese construction company has announced that it wants to go in the other direction.
Shimizu Corp. revealed blueprints for an astonishing undersea city: a vast research and residential station some 10 miles in length that begins just below the sea's surface and burrows beneath the ocean floor.

A full model of “Ocean Spiral,” from the ocean’s surface to its floor

Dubbed the 'Ocean Spiral,' the project is projected to cost $26 billion and take five years to complete, although the research for the technology required is still in its infancy.
If ever completed, it would make real visions of a latter-day Atlantis in the deep.

It has the support of a myriad research firms and Japanese government agencies.
A research station at the bottom of the structure would would study ways to excavate energy from beneath the sea floor.
A 15-kilometer length spiral would coil up from there to a giant sphere some 1,500 feet in diameter that would have hotels, apartments and commercial areas, and could accommodate as many as 5,000 people. 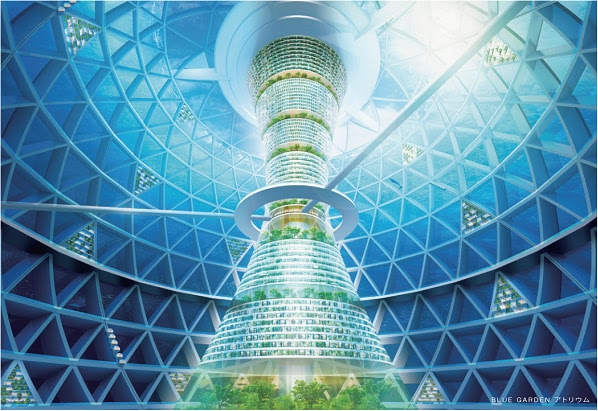 "This is just a blueprint by our company, but we are aiming to develop the technology that would enable us to build an underwater living space," a Shimizu spokesman told the Wall Street Journal.
The ocean water temperature differentials between the various parts of the structure would help generate power. 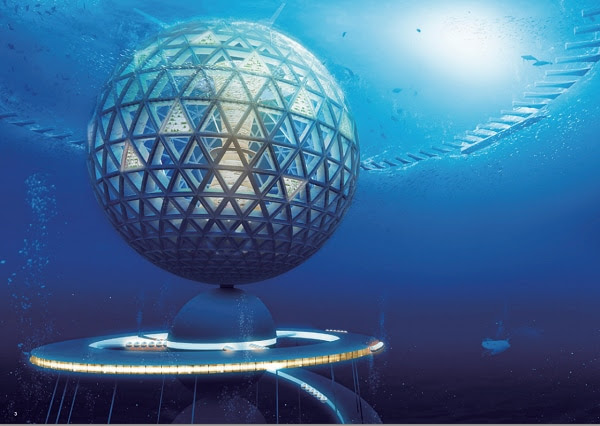 The "blue garden" sphere at the top of the Ocean Spiral. (Shimizu Corp.)

Japanese construction companies are known for their outlandish aspirations.
Obayashi Corp., a Shimizu rival, has already announced it plans to engineer a near 60,000-mile-long "elevator" into space, scheduled to be ready by 2050.

Shimizu has already unveiled plans for a floating metropolis (see below) and a solar ring around the moon.


Green Float : a Floating City in the Sky

The Ocean Spiral blueprint comes at a time when an increasing number of governments, multinationals and international organizations are scratching their heads about how to cope with rising sea levels and the effects of climate change on those most vulnerable to it.
Christian Dimmer, an assistant professor of urban studies at Tokyo University, thinks such planning should not just be the preserve of powerful private corporations.
He tells the Guardian:


We had this in Japan in the 1980s, when the same corporations were proposing underground and ‘swimming’ cities and 1km-high towers as part of the rush to development during the height of the bubble economy. It’s good that many creative minds are picking their brains as to how to deal with climate change, rising sea levels and the creation of resilient societies – but I hope we don’t forget to think about more open and democratic urban futures in which citizens can take an active role in their creation, rather than being mere passengers in a corporation’s sealed vision of utopia.