This video shows how they use a Secchi Disk to determine how deep light is penetrating in to the water.
This gives an indication of the water clarity and how much primary production (plankton) may be present.
In turn, this can be related to sightings of filter feeders such as basking sharks.

Scientists are enlisting sailors and fishermen to help with what they hope will be the world's biggest study of plankton in the oceans.

Plankton are microscopic organisms, key to the marine food chain, but research suggests they are in decline.

Researchers at Plymouth University's Marine Institute want seafarers to help measure the quantity of plankton.
The results will "help us understand how life in the oceans is changing", said project leader, Dr Richard Kirby.
Scientists fear that the population of phytoplankton in the world's oceans is being affected by rising sea temperatures, with a paper published in the journal Nature in 2010 controversially suggesting that it had declined by as much as 40% since the 1950s due to climate change. 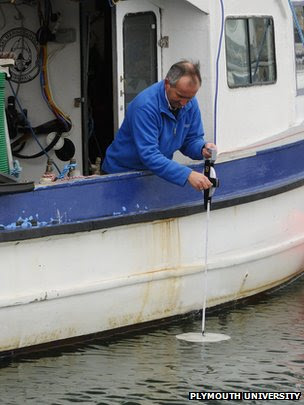 If this is the case it would have damaging consequences for every aspect of marine life, say researchers.
But data on phytoplankton populations is sparse.
The Plymouth team hope that the readings taken by seafarers will ultimately allow them to test the theory.

The organisms are microscopic, thinner than a strand of human hair, but in large numbers they make seawater cloudy.
In order to measure their populations, seafarers are being asked to drop a white disk over the side of their boats attached to a measuring tape.
They are asked to record the depth at which it disappears from view, and upload the figure to a mobile app.
This information will help scientists estimate the amount of plankton in the sea and how it varies from place to place and year to year.

Secchi on the AppStore
Along with the Secchi App, all you need do to take part is make a very simple piece of scientific equipment called a Secchi Disk and use it to record the Secchi Depth when you are at sea.

"There are too few scientists to survey the world's oceans as well as we would wish," said Dr Kirby.
"This app enables seafarers around the world to take part in a science project and if we can just get a small percentage of the global population of sailors involved, we can generate a database that will help us understand how life in the oceans is changing. It would help us learn much more about these important organisms at a crucial time when their habitat is altering due to climate change."
"We hope people will take part for many years to come."

Ultimately the plan is to build a map of the oceans to record seasonal and annual changes in plankton populations.
The scientists are hoping that sailors will be prepared to make their own measuring disks which they stress should be 30cm (11.8in) in diameter for uniform measurements.

The app is named after the inventor of the measuring disk, Father Pietro Angelo Secchi, who used it to gauge the cloudiness of the Mediterranean in 1865.
Sailors are asked to take readings whenever they can, but to avoid taking measurements in estuaries. The data they collect will upload automatically onto the Secchi Disk database once they return to port and get a network connection.
Posted by Peio at 1:09 AM