Rig runs aground in Alaska, reviving fears about Arctic drilling

Coast Guard overflight of Kulluk aground

One of Shell Oil’s two Arctic drilling rigs is beached on an island in the Gulf of Alaska, threatening environmental damage from a fuel spill and calling into question Shell’s plans to resume drilling in the treacherous waters north of Alaska in the summer.

The rig, the Kulluk, broke free from a tow ship in stormy seas and ran aground Monday night. 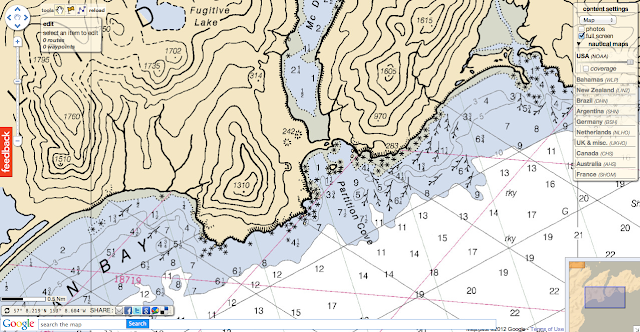 site where oil rig ran aground on Sitkalidak island, close to Kodiak island in the Gulf of Alaska
>>> geolocalization with the Marine GeoGarage <<<

The Coast Guard was leading an effort to keep its more than 150,000 gallons of diesel fuel and lubricants from spilling onto the rocky shoreline.

At a news conference in Anchorage on Tuesday afternoon, Capt. Paul Mehler III, the federal on-scene coordinator, said that a reconnaissance flight showed the Kulluk was upright and stable, with no significant motion.
“The results are showing us that the Kulluk is sound,” Captain Mehler said.
“No sign of breach of hull, no sign of release of any product.”
He said the response team hoped to get salvage experts aboard the ship to get a better picture of damage.

Steven Russell of the Alaska Department of Environmental Conservation said that, so far, there was no sign of harm to the environment or wildlife.
The Kulluk’s 18 crew members had been evacuated by Coast Guard helicopters on Saturday after the rig first went adrift in high winds and rough seas.

The grounding was the latest in a series of mishaps to befall Shell’s ambitious plans to prospect for oil in the Beaufort and Chukchi Seas off the North Slope of Alaska.
Shell halted drilling for oil in September after equipment failures, unexpected ice floes, operational missteps and regulatory delays forced the company to scale back its plans.

Its drilling rigs completed two shallow pilot holes and left the Arctic in late fall to return to Seattle for maintenance work but have encountered problems in transit.

If the Kulluk, which Shell upgraded in recent years at a cost of nearly $300 million, is wrecked or substantially damaged, it will be hard for the company to find a replacement and receive the numerous government permits needed to resume drilling in July, as planned.

Under Department of Interior rules governing Arctic drilling, the company must have two rigs on site at all times to provide for a backup vessel to drill a relief well in case of a blowout, an uncontrolled escape of oil or gas.

A separate containment system designed to collect oil in the case of a well accident failed during testing, preventing Shell from drilling into oil-bearing formations during its abbreviated exploration season last summer and fall.
Shell’s Alaska vice president, Pete Slaiby, said he could not discuss the latest accident, saying that company officials were working with a Coast Guard-directed unified command and could not comment separately.

An official involved in the response operation, who spoke on the condition of anonymity because he was not authorized to comment, said: “We don’t know about the damage.It’s too dark.The weather is horrendous.” The official said that when a helicopter flew over the rig Monday night: “It looked upright about 1,600 feet off the beach. There was no sign of any spill.”
The official said the fuel tanks on the vessel were well protected inside the hull, making a spill unlikely.

The Kulluk, which does not have a propulsion system of its own, ran into trouble late last week when its tow ship, the Aiviq, lost engine power and the towline separated.
A Coast Guard cutter and other ships arrived, and crews struggled through Monday, in seas up to 35 feet, to reconnect tow lines to the rig, succeeding several times.
But each time the lines separated.

On Monday night, the Kulluk, 266 feet in diameter, broke free from one tow ship and the Coast Guard ordered a second ship to disconnect, fearing for the safety of its crew. 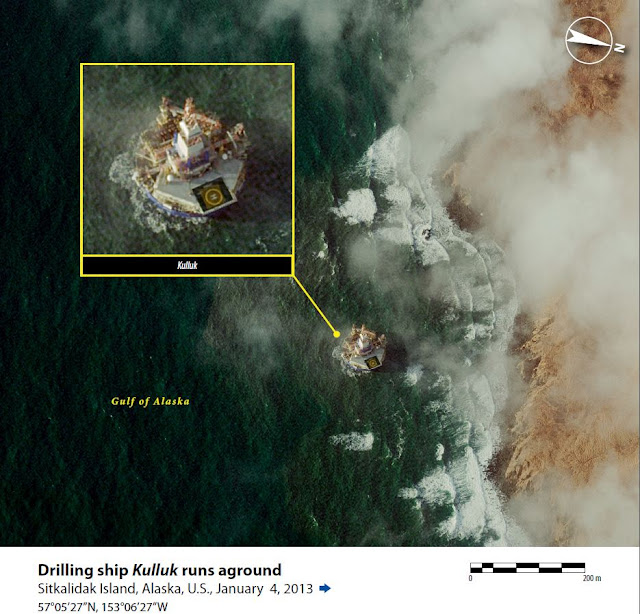 High-resolution satellite image showing the drill rig Kulluk aground
off the coast of Alaska on January 4, 2013.
Image courtesy DigitalGlobe

The Kulluk is sitting on the southeast coast of Sitkalidak Island, an uninhabited island separated by the Sitkalidak Strait from the far larger Kodiak Island to the west.
The nearest town, Old Harbor, is across the strait on Kodiak Island; it has a population of about 200 people. The strait is home to a threatened species of sea lion.

A spokesman for the Interior Department’s offshore drilling safety office would not say whether the latest problem would cause a re-evaluation of the agency’s approval of Shell’s overall Arctic program.
But the spokesman, Nicholas Pardi of the Bureau of Safety and Environmental Enforcement, said that any equipment Shell proposes to use off the Alaskan coast must meet federal safety and testing standards.
He added that regulations require a federal inspector be present around the clock during drilling operations.

The other ship Shell has used in the Arctic, the Noble Discoverer, has had problems of its own. In July, before sailing to the Arctic, it nearly ran aground after dragging its anchor in the Aleutian Islands.
Then in November it had a small engine fire.

Later that month, during an inspection in the Alaskan port of Seward, the Coast Guard found more than a dozen violations involving safety systems and pollution equipment.
Last week, the Noble Corporation, the Swiss company that owns the 512-foot-long drillship and is leasing it to Shell for $240,000 a day, said that many of the problems had been repaired and that the ship was preparing to sail to Seattle to fix the remainder of them.

Critics said that the accident confirmed their worst fears about Shell’s Arctic project and should force federal regulators to stop it.
“We’re learning that oceans, while beautiful, are dangerous and unforgiving,” said Michael LeVine, senior Pacific counsel for the environmental group Oceana.
“Shell has demonstrated again and again that it’s not prepared to operate in Alaskan waters. Hopefully something good will come out of this latest incident, and the government will take a careful look at whether activities such as this can be conducted safely, and if so, what changes are needed to make that possible.”

Shell was on the verge of drilling in 2011, but delays in getting final approval for an air quality permit forced the company to put off drilling until 2012.
More equipment failures and unpredictable weather continued through the year.
In September, Shell had to abandon preliminary drilling in the Chukchi Sea when sea ice moved toward the drilling area only a day after work began.

And finally, the company was forced to put off completing the two wells it had begun to drill for another year when a barge containing a spill containment dome was badly damaged during a testing accident.
During the testing, a mechanical device malfunctioned as the containment dome was lowered into the water, and a submarine robot became tangled in some of the dome’s anchor lines.