Future research on the ocean-atmosphere will be facilitated by a state-of-the-art simulator that’s set to be constructed on the Scripps campus.
The NSF funded SOARS instrument will mimic the ocean with unprecedented accuracy
From Wired by Matt Simon

It’s a 32,000-gallon concrete tank with a wind tunnel grafted on top.
With it, researchers can study the seas—and climate change—like never before. Schematic created by SOARS scientists depicting the variables within ocean-atmosphere systems that scientists will be able to replicate using SOARS.
JUST A SHORT walk from the sea at San Diego’s Scripps Institution of Oceanography, researchers are putting the finishing touches on a remarkable feat of engineering: an indoor ocean.
Stretching 120 feet in this cavernous building, the 32,000-gallon concrete tank is topped with huge ducts that blast 60-mph winds across seawater piped in straight from the Pacific.
At one end of the machine, a paddle pushes waves, creating a roiling surface.
It’s all lit with natural photons pouring in from conical overhead skylights that look like rocket engines.

This is the Scripps Ocean Atmosphere Research Simulator, or Soars, a customizable ecosystem for scientists to better understand how the seas are transforming under the burden of climate change.
It’s currently undergoing trials, with an official opening slated for next summer.
When Soars opens, there will be nothing else like it in the world.
If you’re a researcher interested in studying the Arctic Sea, you can form sea ice by switching the simulator into polar mode, which drops the water temperature to 34 degrees Fahrenheit and the wind to –2 degrees.
Or you can crank the thermostat the other way to simulate climate change.
If you’re interested in ocean acidification, you can infuse carbon dioxide into the hermetically sealed simulator and watch what it does to real seawater.

“Imagine it as a giant wave tank with a wind tunnel grafted on top,” says Scripps oceanographer Dale Stokes, co-principal investigator of Soars.
“You end up with this natural sort of analog computer—we can turn all these knobs and look at what happens.”

We’ve all heard that three-quarters of Earth is covered with oceans, and that scientists know more about the surface of the moon than they do of the deep sea.
But, more urgently, researchers know too little about how the surface of the sea is interacting with the atmosphere—how waves spew particles that eventually form fog and clouds; how skyrocketing carbon-dioxide levels are affecting the organisms floating in the open ocean; and how sea ice might be changing as waters warm. 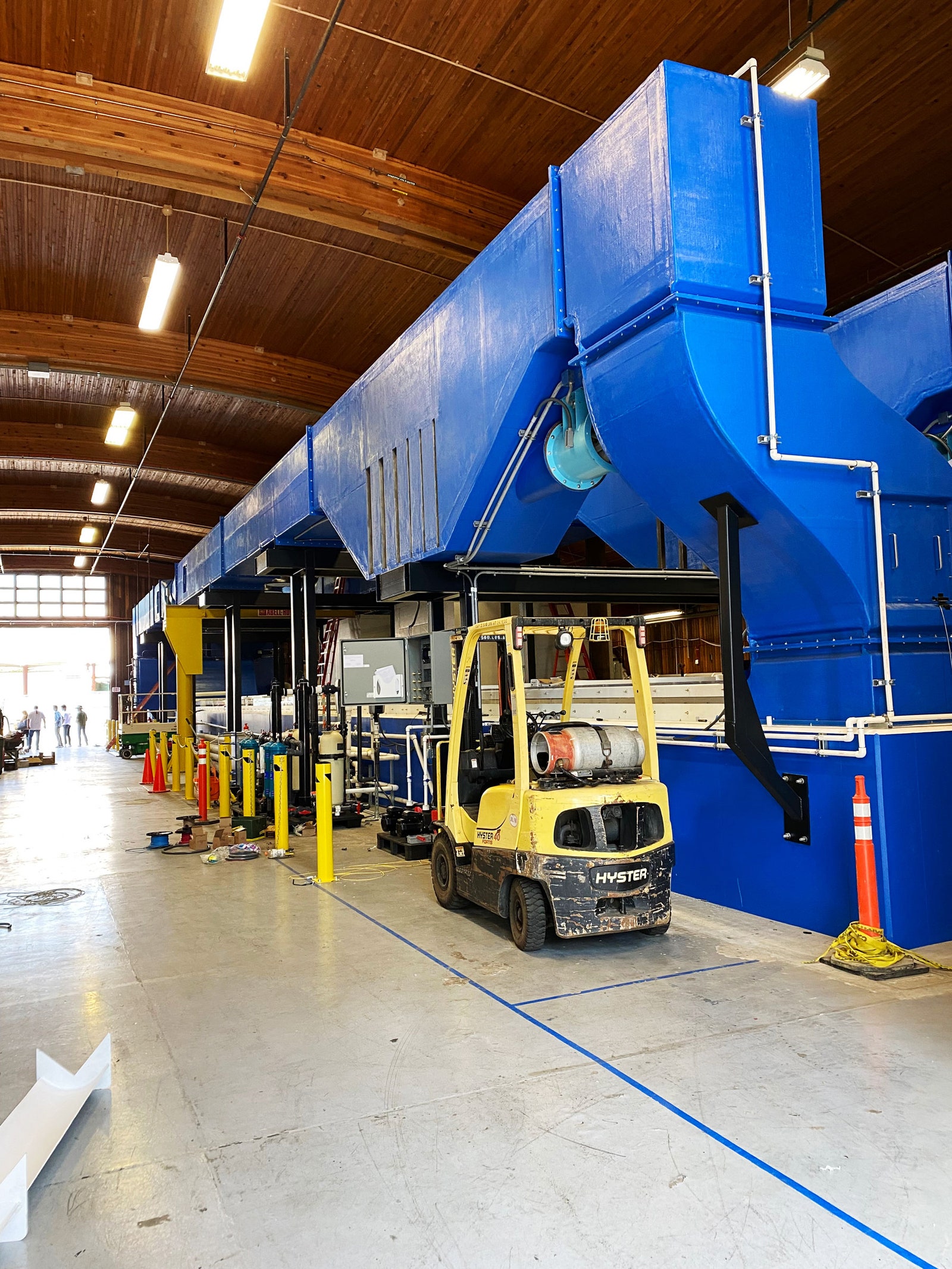 “It's a complex mixture of chemistry, biology, and physics,” says Scripps oceanographer Grant Deane, co-principal investigator of Soars.
“That's one of the things that we've discovered in the last, I would say, 15 years—these complex interactions in this thin layer on the surface of the ocean.
And what happens there influences clouds, ice, weather, climate.
We have to understand that boundary and the role it plays in the climate.”

Soars gives oceanographers unprecedented control over these variables.
Up until now, scientists could run complex computer climate models to estimate, say, how increasing CO2 levels might change the chemistry of surface waters.
These models are useful, but their resolution is coarse.
Because of limited computing power, the models break the ocean up into pixels on the scale of tens to hundreds of kilometers.
If scientists tried working on the centimeter scale, they’d be waiting for results for a very long time.
With Soars, oceanographers can snake instruments through the walls of the tank and take CO2 measurements on an extremely fine scale. 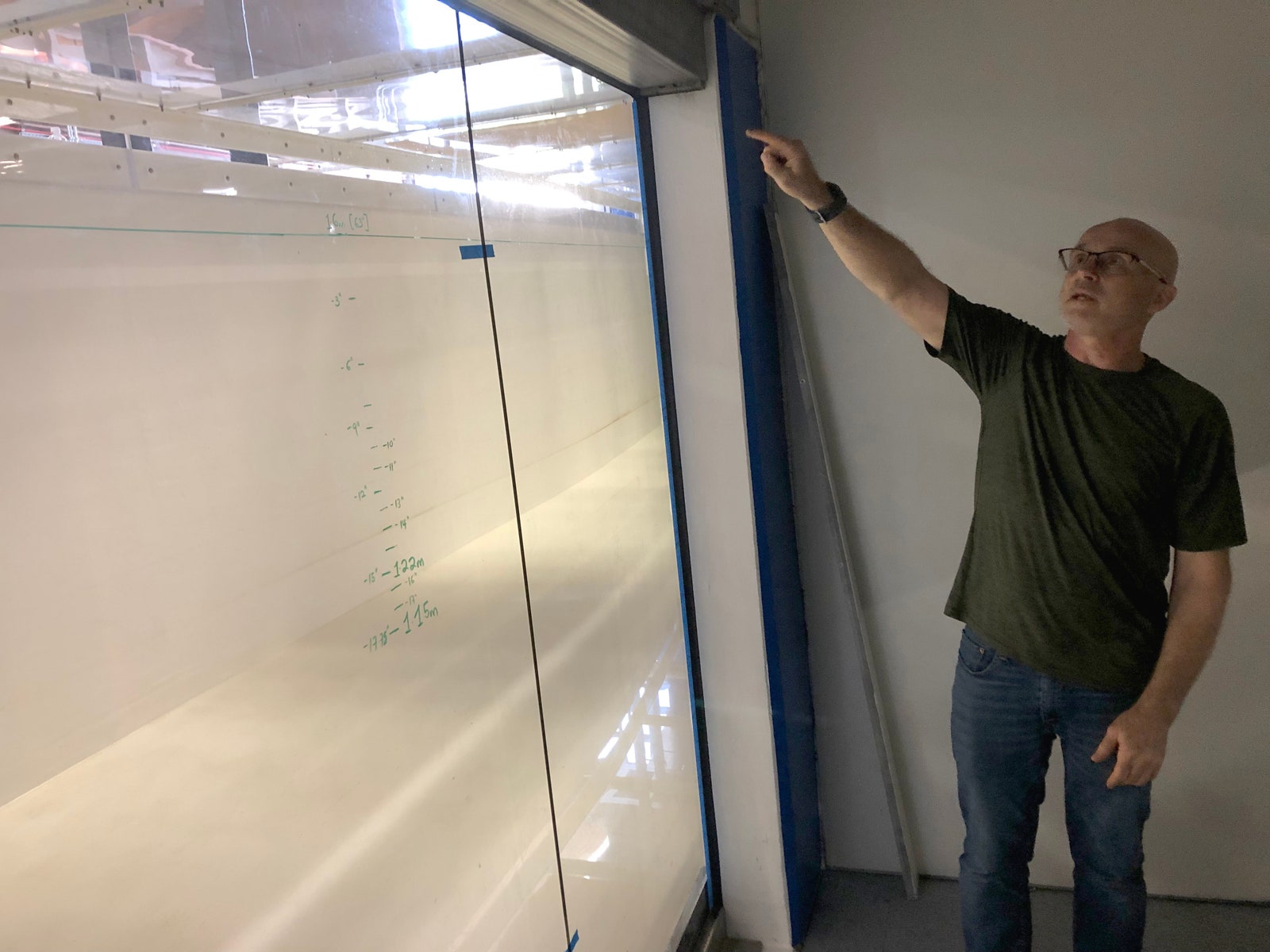 Illustration : SCRIPPS Institution of Oceanography
Another option for scientists is going out on a research vessel—but it can run them over $20,000 a day to use a boat, whereas Soars will cost $1,500 to $2,000 a day.
Stokes and Deane reckon that, depending on the nature of the research, investigators might need the machine for a few days to a few months.
The simulator will be open to any researcher, at Scripps or otherwise.


Relatively short, simple experiments might involve measuring how wind speeds and wave sizes influence the number of aerosols that fly off the water’s surface.
Or someone might want to know how the “albedo” of the ocean changes, meaning how much of the sun’s energy it reflects.
As the simulated sea gets rougher, white caps would bounce back much of the sunlight, while calmer, darker waters would absorb more of it and heat up.

A longer and more complex experiment would involve cultivating microbes and plankton—little plants and animals that float at the mercy of currents—and playing with water and air temperatures to see how they react.
Or a researcher might fiddle with atmospheric CO2concentrations, which currently are around 420 parts per million on Earth.
“One of the first things we'll do is we'll pump the CO2 up to 600 ppm and see what that does to the organisms,” says Deane.

What do all of these experiments have in common? Control.
Oceanographers can only study the real sea as-is and in the moment.
With Soars, they will be able to essentially fast-forward into a world with higher temperatures and CO2 levels.
“We can turn these knobs and make very good estimates of what future systems look like,” says Stokes.


Atmospheric aerosol scientist Paul DeMott of Colorado State University is planning an experiment at Soars next summer in which his team might change temperatures and wind speeds to see how aerosols are generated.
He’ll be able to watch the process close up from several vantage points: A gangway over the tank offers a top-down view, and a big aquarium-style window in the control room shows the experiments in cross-section.

Illustration : SCRIPPS Institution of Oceanography
For DeMott, Soars provides an ultra-controlled environment where he can isolate aerosols from the water without having to worry about other sources.
Scientists can certainly sample aerosols at sea, but they can’t be sure they’re only getting aerosols coming off the patch of water they’re studying—all sorts of atmospheric gunk is also blowing in from land and other parts of the ocean.
“So you're getting some kind of an integrated effect when you're making a measurement on the ship, and you aren't necessarily capturing only the nascent emissions that are coming from the ocean,” says DeMott.

Understanding ocean aerosols is critical, because when water forms around them in the atmosphere, they go on to seed clouds.
That means the ocean is intimately linked to precipitation on land.
Plus, clouds also produce an albedo effect: The bigger and brighter they are, the more of the sun’s energy they reflect back into space, thus cooling the climate.
Might changing wind patterns and warmer oceans change how clouds are formed? With Soars, DeMott can play with the variables and see what happens.

Kimberly Prather, an atmospheric chemist at the Scripps Institution of Oceanography and co-principal investigator of Soars, has been participating in the simulator's trial runs this fall, and will be running full experiments once it opens.
Her work involves cultivating life in the tank, like microbes and phytoplankton, which are the base of the oceanic food web.
Little animals known as zooplankton eat these phytoplankton, and bigger fish eat the zooplankton, and so on up the food chain.

But despite these microbes being tiny, they may have a planetary climate effect.
When microbes proliferate in this water, they get very, very gassy.
We’re talking a complex cloud of dimethyl sulfide, methanethiol, nitrogen compounds, and more.
“They emit gases when they're stressed, they emit gases when they're happy—if you will.
They emit gases when they communicate with each other,” says Prather.
“They emit gases all the time, and that has never been looked at in the ocean before.
That is something that we want to do in this simulator.”
With Soars, Prather now has unprecedented control over the temperatures, turbidity, winds, and atmospheric gas concentrations that could influence how these microbes proliferate, and in turn how their off-gassing influences the atmosphere.
“Nobody has done it yet in a systematic manner, to really go after how the ocean is controlling the composition of the atmosphere that's ultimately affecting air quality and health, and the health of our planet,” says Prather.
“To me, as an atmospheric scientist, it's shocking that there's this big of a gap.”

The data gathered from Soars experiments about the boundary between air and water can then be used to improve coarser global climate models by plugging this new fine-scale data into them.
“To understand all of these as a dynamic evolving system, I think it's going to be a really, really exciting and powerful facility,” says UC Davis atmospheric chemist Christopher Cappa, who’s planning experiments at Soars next summer.
“What you get with a facility like this is the ability to really hone in and nail down processes.”

The stakes are astronomical.
More than 90 percent of the global warming humans have caused has been absorbed by the oceans; so far, the seas are saving us from ourselves.
But scientists desperately need to understand how the oceans themselves are faring, and how changes within them might influence the entire climate.
“If we don't wake up, if we don't understand the consequences of our behaviors, we are going to be in a really tight spot,” says Deane.
“We already have purchased a certain amount of pain for the future—how much more we purchase depends on what we do now.”
Links :
Posted by geogarage at 1:26 AM