Why the track forecast for hurricane Dorian has been so challenging

Here is something that you can take to the bank.
We will not see the name "Dorian" used in the Atlantic basin for any future hurricane.
The names of particularly destructive or impactful storms are retired.

Seas warmer than 27.8°C (82°F) are generally considered hurricane fuel.
HurricaneDorian is now at Category 3 strength.
Although the route of Dorian is uncertain, one thing is for sure: it has plenty of warm water on any path it takes.

I have been in the field of meteorology over 25 years and do not recall seeing warnings about 220 mph gusts for a hurricane.
Hurricane watches have also been issued for Andros Island and from North of Deerfield Beach to the Volusia/Brevard County Line in Florida. At the time of writing, the official forecast from the National Hurricane Center is for a northward curve and no direct Florida landfall.

This is dramatically different from forecasts only a few days ago.
There is still uncertainty with the forecast so coastal Florida, Georgia, and the Carolinas should remain on high alert.
Why has the track forecast been so challenging with Hurricane Dorian? 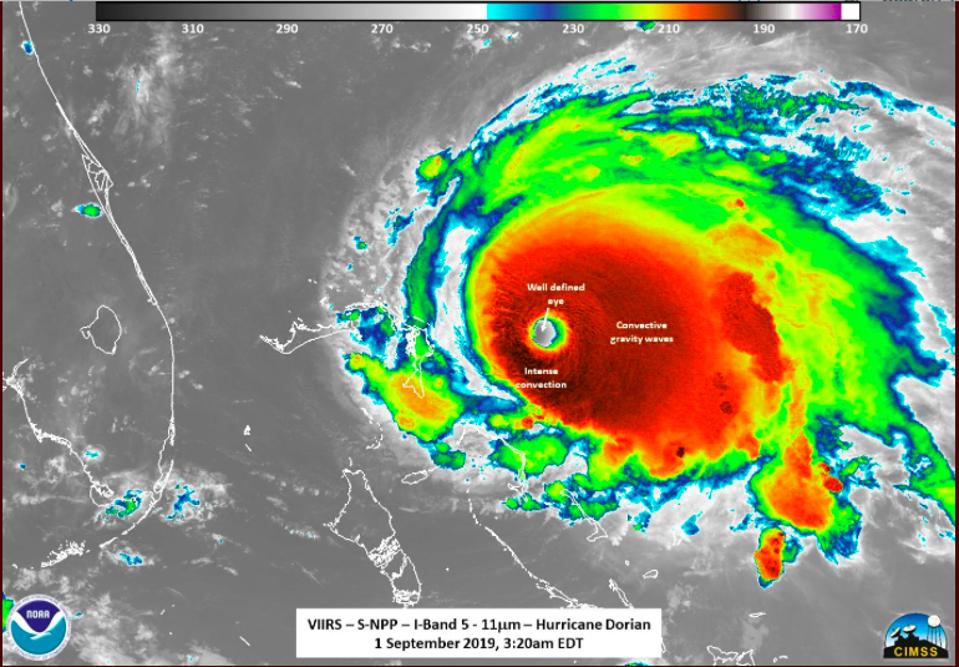 Historically, hurricane track forecasts have outpaced intensity forecasts.
I discuss the reasons why in a previous Forbes article at this link. With Hurricane Dorian, uncertainty about the forecast track and timing of the storm forced officials to move the Florida State - Boise State football game from Jacksonville, slated for a 7 pm kickoff on Saturday, to noon in Tallahassee.
I am certain that many businesses and people are questioning the move given that timing of when impacts are now expected.
Unfortunately, officials and emergency managers often must make decision on the best information at the moment.

Some people may be tempted to use uncertainty with this forecast to spew vitriol or skepticism at meteorologists and our models.
However, challenges with Hurricane Dorian's track forecast do not define the legacy of weather forecasts.
It would be silly to say that the NFL's best field goal kicker is terrible based on a few misses.

So what's going on? I asked a panel of tropical meteorology experts.

Speed of motion of Hurricane Dorian has been a significant challenge.
Professor John Knox, a recent recipient of the American Meteorological Society's Edward Lorenz Teaching Award, offers an important lesson.
The University of Georgia atmospheric sciences professor pointed out:

Before you bash the meteorologists for being stupid: one reason the forecasted track has changed is because the forecasts of the forward speed of Dorian have slowed it down more and more.
If it had chugged along as originally forecast, it likely would have hit east-central Florida and then maybe gone into the Gulf, before the high pressure above us in the Southeast would break down.
But, because it's moving more slowly, the high-pressure break down is opening the gate, so to speak, for Dorian to go more northward and eastward.
So, the change in forecast is tied tightly to the arrival timing.

Dr. Phillippe Papin is an Atmospheric Scientist and Associate Postdoctoctor Scientist at the U.S.
Naval Research Laboratory.
Papin also points to the high pressure as being a factor.
He wrote:

The timing of when that weakness develops and on how far Dorian makes it west in the meantime has been the source of uncertainty in the model guidance for the last 2-3 days according to Papin.
At the time of writing, there is still some spread in the model solutions. 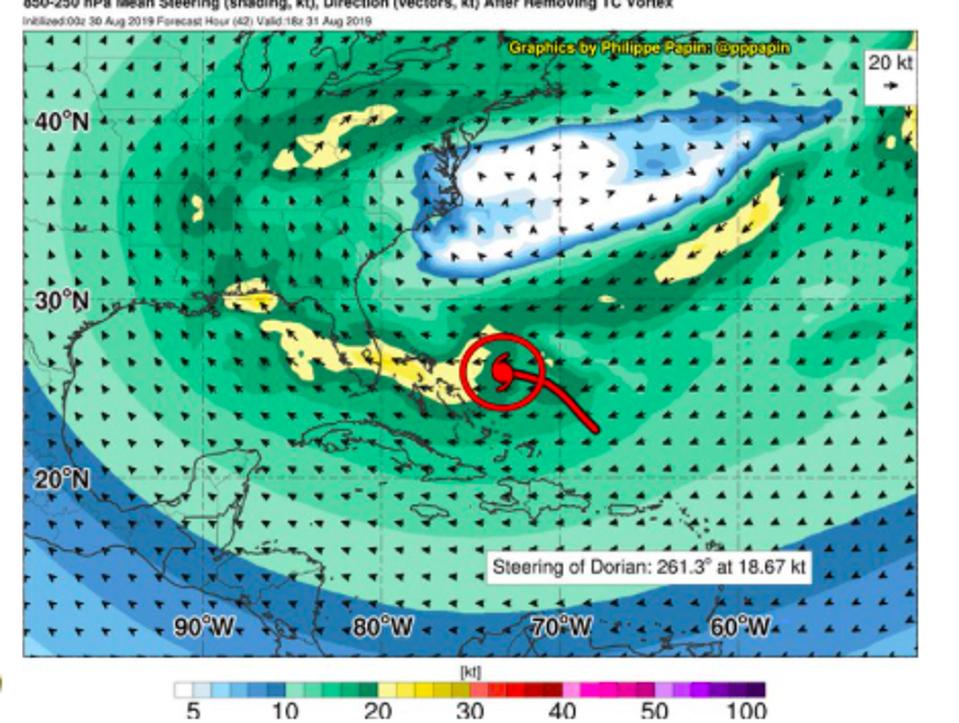 
Dr. Michael Ventrice is a tropical weather expert with IBM and The Weather Company.He has been concerned about the storm environment and how well the models are capturing the rapidly evolving situation.
He told me:

I believe the uncertainty is derived from how the models are resolving Dorian, locally.
The recent intensification of the storm today is not being resolved by the models properly at the time of the 12z initialization.
The interaction with the Bahamas, how that interaction might alter the mesoscale structure of the Hurricane, if that interaction induces a wobble, are all valid questions at this point in time
Michael Ventrice — IBM/The Weather Company

A hurricane of this size and intensity can certainly modify its environment and be modified by that environment.
Sam Lillo, a doctoral candidate at the University of Oklahoma, tweeted an interesting point on the afternoon of September 1st about how worrisome the rapid intensification and track uncertainty of Hurricane Dorian has been:

The track uncertainty in NWP at under 3-day lead-time is very uncomfortable, especially considering proximity to land. This would be uncomfortable for any hurricane. But then make it a category 5.
Sam Lillo, doctoral candidate in meteorology at the University of Oklahoma

Our best models have oscillated (and in some cases continue to do so) within the past 24-36 hours on just how close Dorian will get to Florida before curving northward.
Lillo offers some further insight into what Dr. Ventrice was alluding to about the environment:

As Dorian strengthened faster than expected, diabatic outflow developed an upper level anticyclone to the southwest, adding southerly and westerly components to the steering flow.
The westerly component in particular slowed the forward motion of the hurricane, and now its track across the Bahamas coincides with a trough that sweeps across the Mid Atlantic and Northeast on Monday.
This trough cuts into the ridge to the north of Dorian, with multiple steering currents now trying to tug the hurricane in all different directions.
The future track is highly sensitive to each of these currents, with large feedback on every mile the hurricane jogs to the left or right over the next 24 to 48 hours.
Sam Lillo, doctoral candidate in meteorology at the University of Oklahoma

Lillo offers a nice meteorological explanation.
In a nutshell, he is saying that the rapid intensification perturbed the near-storm environment and now there may be other steering influences besides the ridge of high pressure that the models are struggling to resolve.

In a previous Forbes piece last week, I mentioned that forecasts in the 5+ day window and beyond can have errors of 200 miles and that the information should be used as "guidance" not "Gospel." Because there is still uncertainty with the models and Dorian is such a strong storm, residents from coastal Florida to the Carolinas must pay attention and be prepared to act.
I have complete confidence in my colleagues at the National Hurricane Center, and they should always be your definitive source with storms like this.
They still maintain an eventual curve northward before the storm reaches the Florida coast.
However, the issuance of hurricane watches in Florida also indicates that they know the margin of error is razor thin. 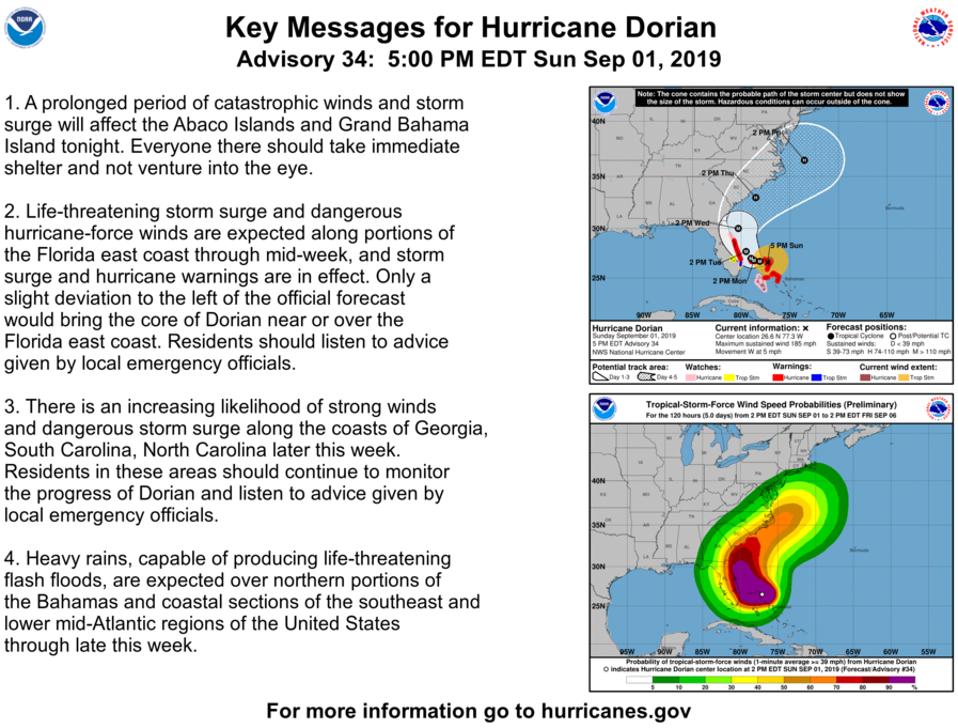