From Silicon Republic by Colm Gorey

Scientists assembling for an ESA scientific conference have been amazed by new findings on how our oceans influence our planet’s magnetic field.

There are many, many mysteries left to be solved about our planet, but arguably the biggest one – from the perspective of scale – is our planet’s magnetic field.

The most detailed map ever of the tiny magnetic signals generated by Earth’s lithosphere compiled after four years of measurements from ESA’s trio of Swarm satellites.
Image: ESA/Planetary Visions

While we have a firm understanding of the basics, how it changes over time and why has continued to elude us – at least until a new discovery made by a trio of Swarm satellites operated by the European Space Agency (ESA). Launched in 2013, the satellites were designed to, from orbit, peer beneath our planet’s surface and analyse its core dynamics and core-mantle interaction as well as the magnetism of the lithosphere and its geological context.

The results presented to this year’s European Geosciences Union meeting in Vienna focused on how the magnetic field is influenced by our planet’s oceans.


Magnetic tides 3D model
When salty ocean water flows through Earth’s magnetic field, an electric current is generated, and this in turn induces a magnetic signal.
However, the field generated by tides is tiny – and extremely difficult to measure, but ESA’s Swarm mission has done just this in remarkable detail.
Swarm has been used to measure the magnetic signals of tides from the ocean surface to the seabed, which offers a global picture of how the ocean flows at all depths.
The magnetic tidal signal measured by Swarm is important for ocean and climate modelling, and is used to determine the electrical properties of the Earth’s lithosphere and upper mantle.
courtesy of ESA

While the magnetic field is created largely by an ocean of superheated, swirling liquid iron in the planet’s outer core, other factors – such as magnetised rocks in the crust and the flow of the ocean – also affect the field. 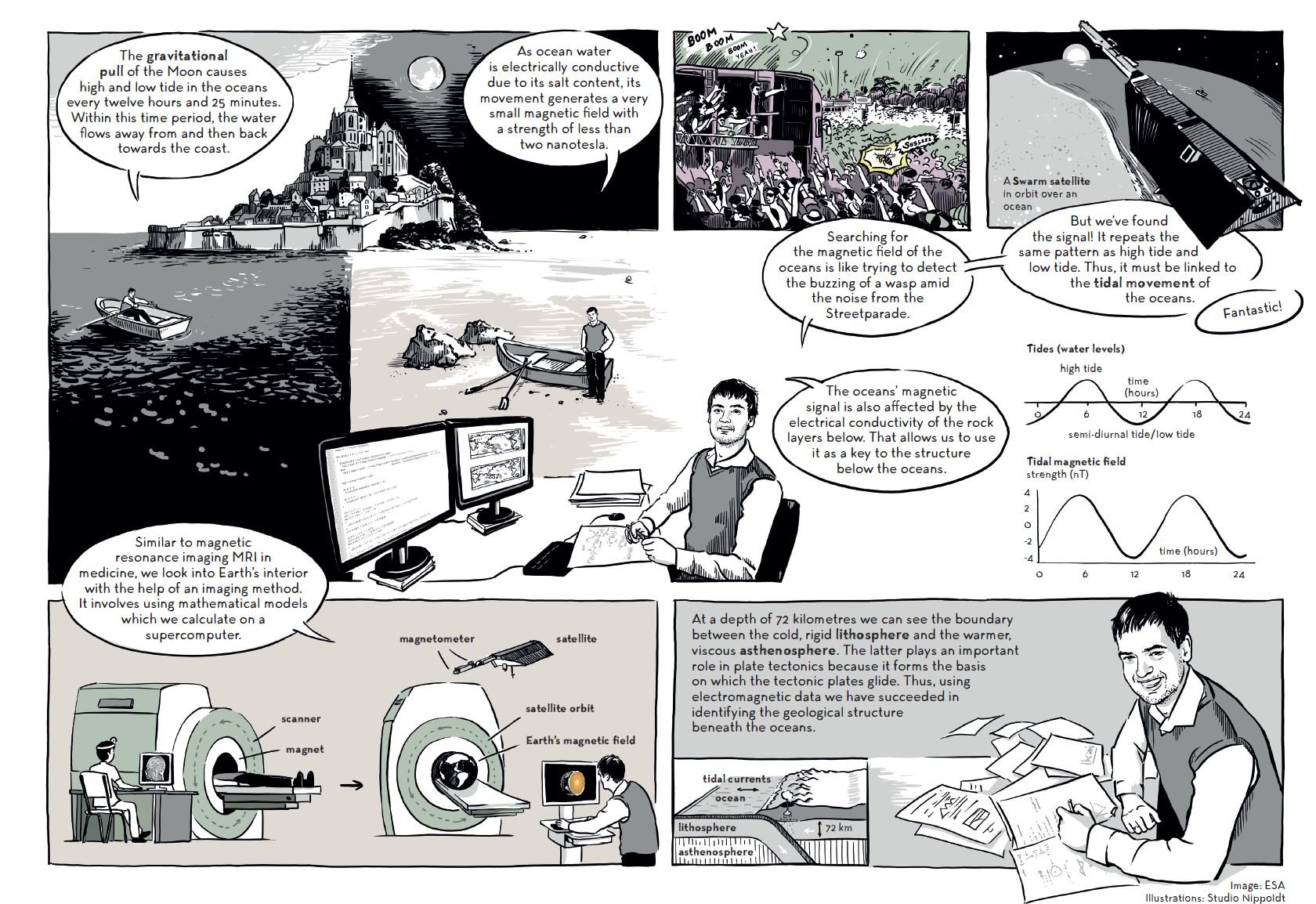 When interacting with the magnetic field, the salty oceans of our planet produce an electric current, which in turn produces a magnetic field. The drift of the magnetic north pole is towards Russia :
There is one observation got from a bounty of Swarm results that will certainly have more general interest - that of the position of the north magnetic pole.
Most people know that it is not aligned with the geographic north pole and instead drifts around.
Recent decades have seen it shift in a direction that is taking it away from Canada towards Russia. Swarm is watching this movement closely.
"This year we are in a rather special situation because in 2018 the magnetic pole will be at its closest to the geographic pole. There is a separation of only 390km. The magnetic pole moves at a speed of about 55km per year," said Prof Olsen.
The expectation is that the gap between the two versions of the pole will widen again from next year.

However, because the field generated by this process was so small, it was extremely difficult to measure its influence until the introduction of Swarm.
“We have used Swarm to measure the magnetic signals of tides from the ocean surface to the seabed, which gives us a truly global picture of how the ocean flows at all depths – and this is new,” said Nils Olsen from the Technical University of Denmark, who was involved in the latest findings.
“Since oceans absorb heat from the air, tracking how this heat is being distributed and stored, particularly at depth, is important for understanding our changing climate.”
He continued: “In addition, because this tidal magnetic signal also induces a weak magnetic response deep under the seabed, these results will be used to learn more about the electrical properties of Earth’s lithosphere and upper mantle.”