Right now, roughly a kilometre below the surface of an ocean near you, a yellow cylinder about the size of a golf bag is taking measurements of the temperature and saltiness of the water.
Every couple of days, the float will drop deeper – down to 2km – and then rise to the surface to transmit its data, before disappearing back into the depths to do the whole thing again.

Schematic of a profiling float cycle.
Upon reaching the surface at the end of a cycle, the data obtained are transmitted via satellite with most of the data being available to operational centers and researchers within twenty-four hours of collection.

These floats do this for as long as eight years, until the poor little things die of exhaustion (well, their batteries run out).
There are about 3,800 of these floats scattered across the globe as part of a program called Argo, supported by more than 30 countries.
It’s likely you’ve never heard of Argo and much less likely you’ve ever seen one of the floats.
But for the last decade, climate scientists and oceanographers have been using the data from these Argo floats to plug a gaping ocean-sized hole in our understanding of global warming.
Scientific papers that use the data from these floats are now appearing in science journals at the rate of about one per day.
But now, scientists are sounding an alarm for the future of this ocean monitoring system. In a commentary in the journal Nature Climate Change, scientists say cracks are starting to appear in the network, largely because of uncertainties over funding.
The commentary predicts it could be only two years before the number of floats drops below a critical threshold of 3,200, which would “considerably undermine the ability of the observing system to monitor and measure the global ocean”. 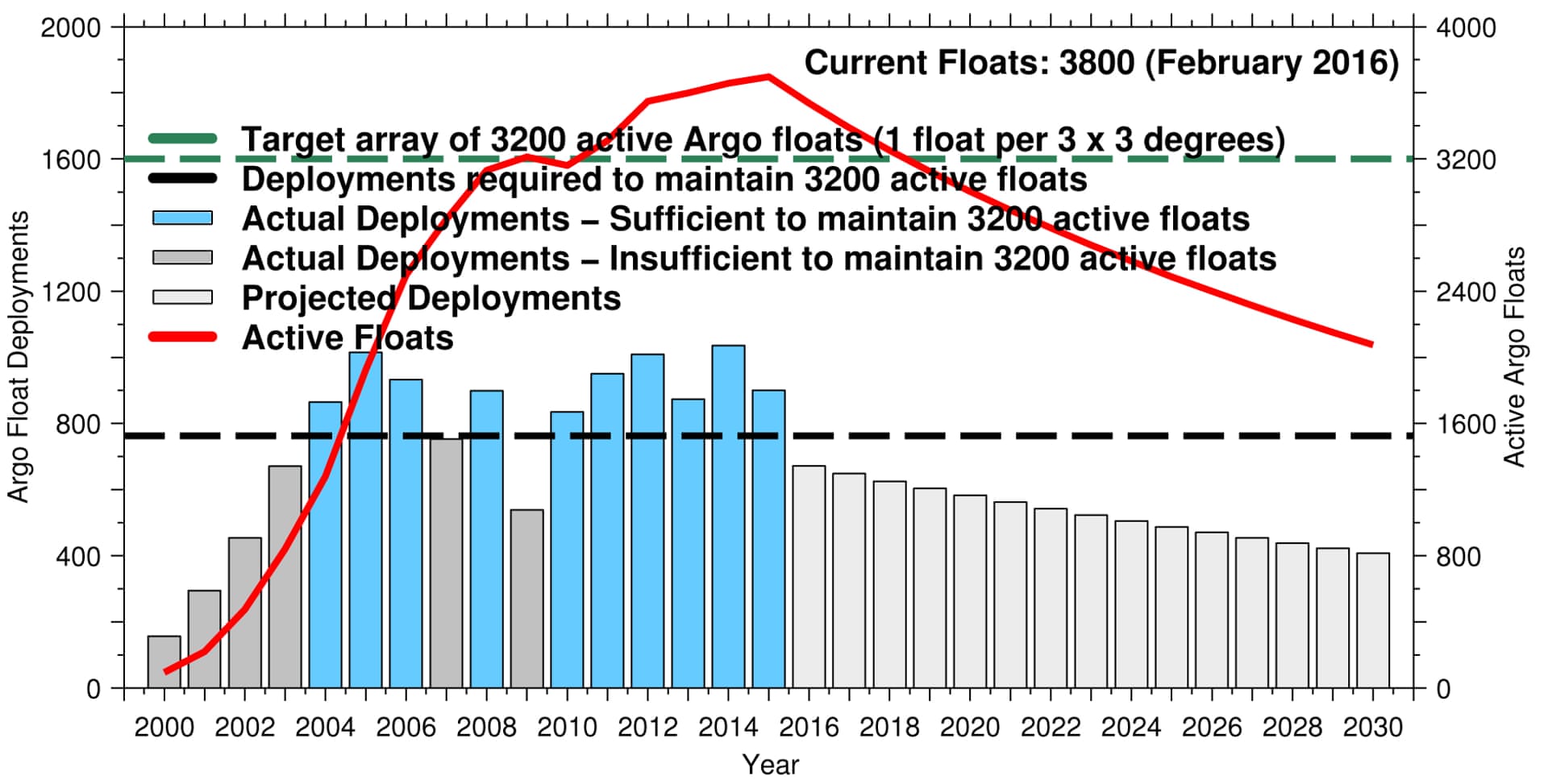 
Australian Dr Paul Durack, of the US government-funded Program for Climate Model Diagnosis and Intercomparison at the Lawrence Livermore National Laboratory, is one of the scientists sounding the alarm.
He told me:


Argo is an amazing entity – there are at least 30 nations involved – and it’s giving us observations that we have never had before. From about 2005, Argo gave us comprehensive ocean data – if you don’t have data you can’t say anything. Basically, it has completely changed the game.

Knowing what’s happening in the globe’s oceans is critical.
About 90% of the extra heat from human-caused global warming has ended up there.

The distribution of active floats in the Argo array, colour coded by country that owns the float,
as of the end of September 2015
see data on Coriolis

Some 31 countries have contributed to the Argo program, with floats costing about US$25,000 each.
The United States funds about half, with about 2,142 of the floats currently in circulation.
France is the second-biggest supporter, with 356 floats, followed by Australia with 346.
Two-thirds of the global ocean is in the southern hemisphere.

Number of papers, by year, published in refereed journals and that are extensively or totally dependent on the availability of Argo data as of March 2015.

CSIRO’s Dr Susan Wijffels is the co-chair of the global Argo program and also the lead scientist for Australia’s contribution to Argo.
In the Nature Climate Change commentary, Wijffels says any drop in the number of deployments of floats could spell trouble.
She told me:


Argo is fundamental because this all comes back to the heat problem.
The key thing that matters for the Earth is how much extra heat is retained in the system.
While we have seen this huge debate over the last 15 years about this so-called ‘hiatus’, really what Argo shows us is that surface variability [in temperature] is just a re-organisation of heat.
When you get below a couple of hundred metres you see the inexorable growth of global warming happening in the oceans.
That’s driving a good chunk of the sea level rise.
It is telling us what the radiation imbalance is at the top of the atmosphere.
Once that heat and that carbon is down there in the deep ocean it’s there for decades – if not longer – and it’s locking in that warming.
We see that warming in Argo right down to the depths of our measurement – right down to two kilometres and its probably extending further.

Oceanographer Prof Dean Roemmich, of the Scripps Institution of Oceanography at the University of California, San Diego, is also a co-chair of the global Argo program.
He told me why there’s a fear the comprehensive coverage that Argo gives the world’s oceans could be at risk.


In most nations Argo is supported by research funds – rather than as operational oceanography – with no mechanism for inflation or for long-term funding.
So far Argo has been successful in increasing the lifetime of floats so that less deployments are needed to maintain the array and bringing in new national programs to sustain the level of total deployments.
Durack points out these advances are difficult to sustain and without them the array would decline. This is an important caution, and along with it we need to continue making the case for Argo’s great value in order to increase support from Argo national programs.


Tim Moltmann is the director of the Integrated Marine Observing System (IMOS), a program funded by the Department of Education and Training and which has provided about half the funding for Australia’s Argo program over the past decade.


It has been revolutionary.
What we knew about the subsurface ocean before Argo was pretty much limited to what we could get from ships – dropping instruments into the water and getting measurements.
You can imagine that’s pretty sparse
What’s critically important from an Australian perspective is that from a historical point of view, measurements of the oceans have been dominated by the northern hemisphere.
Argo has been critically important for Australia and the southern hemisphere because it has enabled us to bootstrap our subsurface observing capability in a remarkable way.
That’s how we know that ocean heat content is changing.
That’s how we know that so-called ‘pause’ [in global warming] isn’t really a pause if you look at the whole system, because the heat has been building up in the ocean.

IMOS has funded about half of Australia’s Argo effort so far, says Moltmann.

All of the boats participating in the Barcelona World Race 2014/15 launched an Argo profiling float (Arvor-L CTD profiling) into the ocean, as part of their round-the-world voyage.
(Neutrogena Imoca 60', Guillermo Altadill & José Muñoz)

Over the past decade, about 20% of the funding for Australia’s Argo program has come from the CSIRO, which also employs about four full-time staff who work to understand and interpret the data and maintain the floats.

Paul Durack is also the scientist who helped to coordinate an open letter signed by almost 3,000 scientists from 60 countries calling on CSIRO to reconsider planned cuts to its climate change research.
He is worried those cuts could make matters worse for Argo.
In the commentary, written before the cuts were announced, Durack writes:


Future forecasts are inherently difficult to generate, due to the short-term nature of national budgets, along with unanticipated technology and deployment problems or new technology breakthroughs.
These are further confounded by a critical dependence on each and every nation that contributes to the array – and a loss of just one of these key contributors will have a profound impact.


CSIRO chairman David Thodey wrote last week that the agency was “committed” to “contribute to the international Argo floats program”.

But when I asked for details of the commitment and whether the cuts would impact on Argo, a CSIRO spokesperson would only say the agency was “currently working through the impacts of the strategic realignment” with staff and research partners.