Nature’s tiny engineers : how corals stir up their world for nutrients

Scientists have found that corals, long believed to be passive organisms relying entirely on ocean currents to deliver nutrients, are actually quite active, engineering their environment producing strong swirls of water that draw nutrients toward the coral, while driving potentially toxic waste products away.

Coral reefs may look static to the naked eye, but scientists have now seen "violent" activity on their surface.

Using powerful microscopes, researchers filmed tiny hairs on the surface of corals "stirring up" surrounding water.
They say that these swirls of water draw nutrients towards the coral, and may also drive away potentially toxic waste products.
The findings are published in Proceedings of the National Academy of Sciences.
Scientists from the Massachusetts Institute of Technology and the Weizmann Institute of Science (WIS) in Israel studied corals grown in a laboratory tank.

"The general thinking has been that corals are completely dependent upon ambient flow from tides and turbulence [to supply nutrients]," said Orr Shapiro from WIS.
These detailed observations overturn that idea. 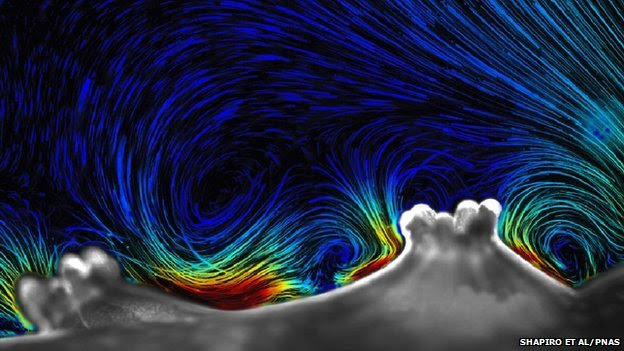 The researchers added tiny "tracer particles" to the water, which enabled them to see and capture images of the movement and flow near the surface of the coral.
They also combined powerful microscopes with high speed cameras, capturing footage of the tiny hairs, or cilia, on the corals' surface.
The resulting slow-motion footage was magnified by up to 1,000 times.
It showed, the researchers reported, the cilia beating and "vigorously stirring a layer of water that extended up to 2mm from the coral surface".

"I was very surprised and so was the entire team," another author of the study, Prof Roman Stocker from MIT told BBC News.
"We knew that corals have cilia, but did not expect that they could produce flows that are so violent."

Such a close-up understanding of how coral reefs work could help predict how they will cope with a changing ocean environment in the face of climate change.
"An active control over the environment suggests a potential ability to cope with changing conditions," said Prof Stocker.
"Although we must be careful in drawing this conclusion, as other factors, such as increased virulence of bacterial pathogens [in warmer] conditions may well tip the balance for corals the other way."

The researcher also pointed out that the experiments could play a role in human health research.
Cilia are found inside human airways, where they help to sweep away contaminants, but these microscopic internal hairs are very difficult to study.

"It's rare that you have a situation in which you see cilia on the outside of an animal," said Prof Stocker. "
"So corals could provide a general model for understanding ciliary processes related to disease."