The first color image of the Earth

On December 24, 1968, Apollo 8 astronauts Frank Borman, James Lovell, and William Anders were coming around from the far side of the Moon on their fourth orbit.
Borman began to roll the spacecraft, and as he did, the Earth rose into view over the Moon’s limb. Anders, photographing the Moon from the right side window, caught sight of the view, and exclaimed: “Oh my God, look at that picture over there! There’s the Earth comin’ up. Wow, is that pretty!” 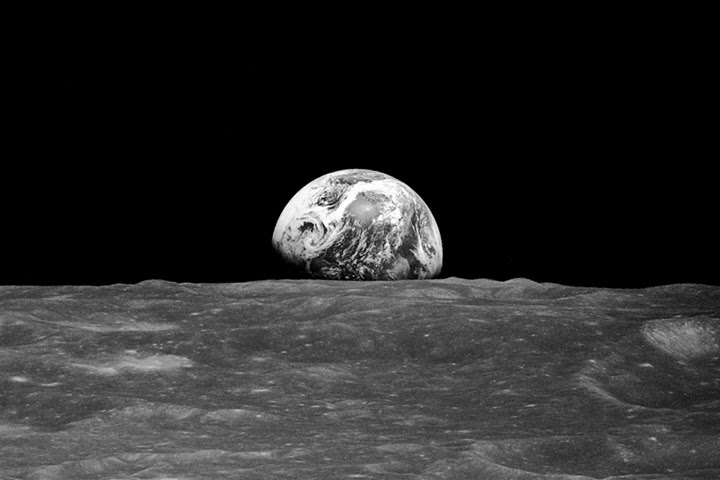 He snapped a black and white photo (top), capturing humanity’s first view of Earth from another planetary body.
A few minutes later, Anders put color film in the camera and took the iconic color photographs of a half Earth hanging over the lunar horizon.

While the astronauts were absorbed in this view of home, a second camera mounted to the front-facing window continued to photograph the Moon every 20 seconds on an automatic timer.
By matching that series of photographs to a high resolution model of the lunar terrain as observed by the Lunar Reconnaissance Orbiter (LRO), NASA scientists and visualizers have now identified exactly when the Apollo spacecraft turned and where and when each Earthrise photograph was taken. This allowed them to re-create the Earthrise experience in a new video (above). 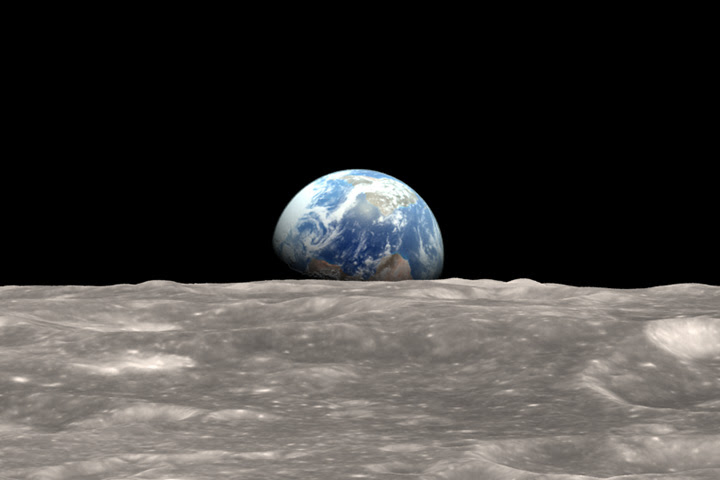 The second image above is a still from that re-created Earthrise.
The surface of the Moon is based on LRO data.
Earth’s cloud patterns are based on the Environmental Science Services Administration 7 satellite as it observed our planet on December 24, 1968
The land surface is based on the Earth Observatory’s Terra MODIS Blue Marble.
This high-fidelity re-creation shows the rising Earth as it must have looked to Anders, Borman, and Lovell 45 years ago.
The western coast of Africa is visible along the lower part of the globe, with Antarctica in the upper left and South America along the top.
The new analysis revealed a few little-known details about the circumstances in which the photos were taken.
Earthrise had occurred on each of the previous three orbits, but none of Apollo’s windows were looking that way.
It was only during and after the roll that the event was visible to the astronauts on their fourth orbit.
Experience Earthrise by watching the new video below, with views matched to the onboard flight recording of the astronauts and additional narration by Andrew Chaikin. 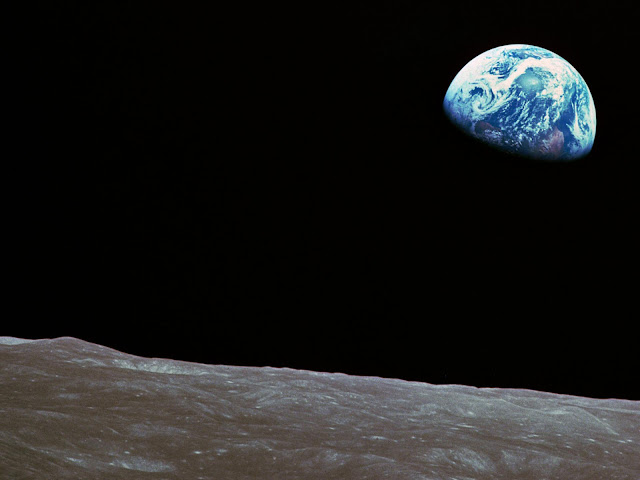 Then watch the Google Hangout with Chaikin, LRO project scientist John Keller, and producer/visualizer Ernie Wright, in which they discuss how the video was made and what new insights it provides.