Fishing in the deep: first observations of a deep-sea anglerfish

A rare species of anglerfish has been filmed for the first time by US scientists.

The deep-dwelling fish was first described in 1899 from a dead specimen but has not previously been seen alive.

Using a remote-operated vehicle, biologists observed the fish "walking" with its fins and using its namesake lure.

Scientists suggest the footage also shows that the fish change colour as they age.
The discovery is reported in the journal Deep Sea Research Part I by the team from the Monterey Bay Aquarium Research Institute (MBARI), California, US.
They made their discoveries in underwater mountainous areas, known as seamounts, off the coast of California.

The species Chaunacops coloratus belongs to the family of fish known as anglerfish because of their unique method of predation.
In the same way an angler uses a baited line to catch fish, anglerfish dangle a fleshy lump (the esca) from their head on a long filament (the illicium) which lures prey towards their mouth.
"[Our results] reveal a little more information about an animal that lives 3200 metres below the ocean's surface that no one has ever seen before," said Senior Research Technician at MBARI Lonny Lundsten, "and we've got gorgeous HD video of it!" 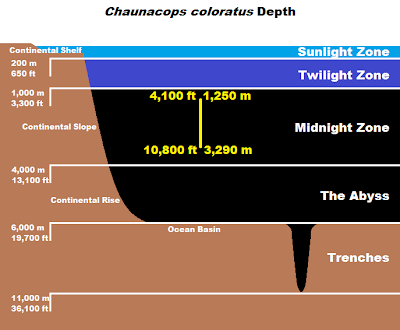 The study has extended the fish's known depth by 1500m and distribution by a further 5500km north.
"Nobody knew these existed off California or north of Costa Rica for that matter," said Mr Lundsten.
Images were captured by the team's submersible vehicle equipped with scientific instruments and underwater recording equipment.

The fish, described as "rarely encountered" by experts, was recorded swimming, retreating from a threat, deploying its lure and "walking" on the sea floor.
According to Mr Lundsten, "walking" is common among anglerfish which use their fins to manouevre across solid surfaces.

Scientists were also intrigued by the observation that smaller fish were steely blue in colour compared to the bright-red adults.
That suggests that colour change is part of the developmental process of the fish as they mature.