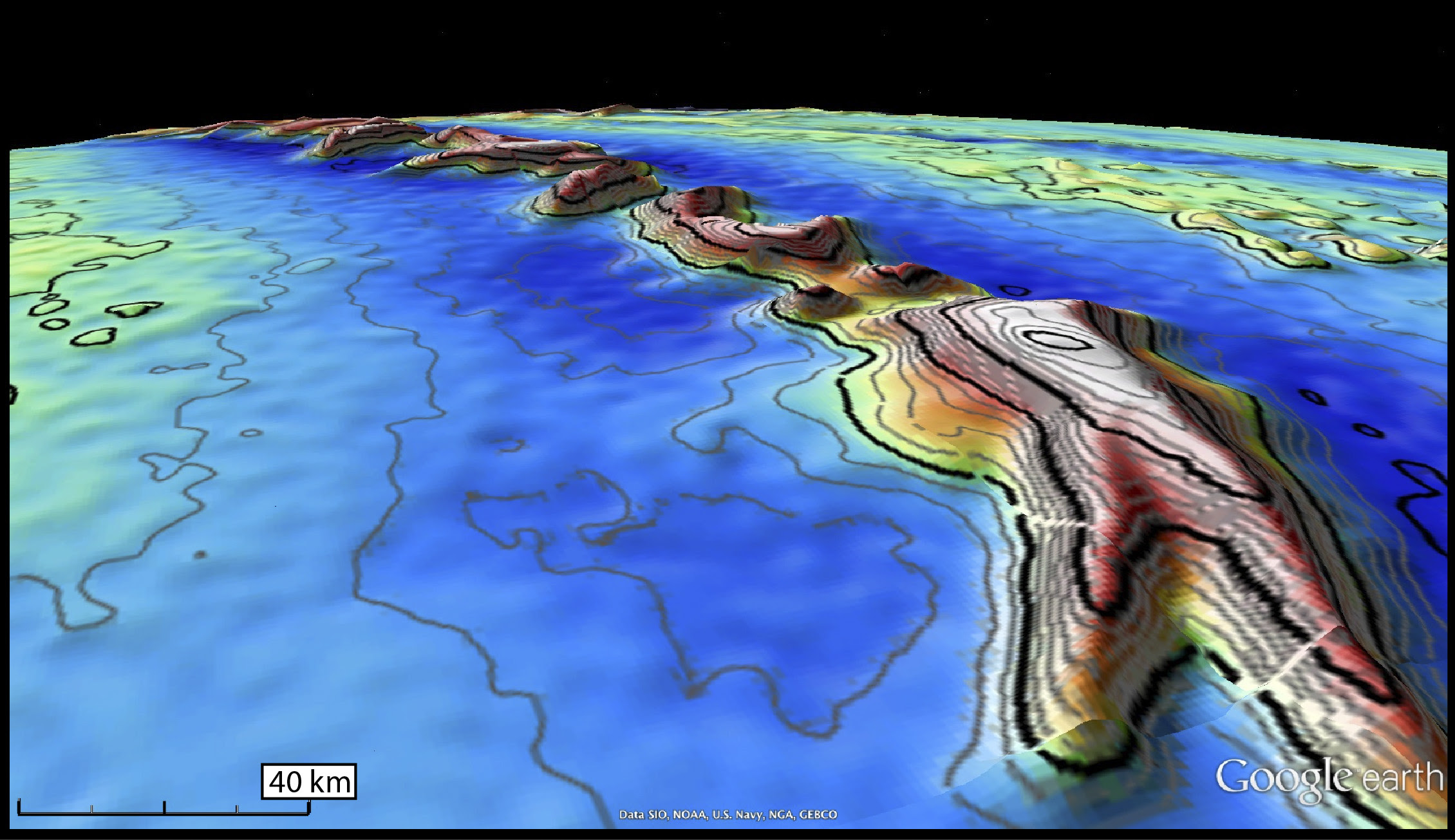 Gravity field over the Pacific Ocean’s Emperor Seamounts based on CryoSat, ERS and Geosat satellite altimeter measurements of ocean-surface height.
At this scale, the gravity field of the ocean reflects seafloor topography, called bathymetry.
The improved radar measurements from CryoSat will be used to improve bathymetry. The measurements will be used in the next generation of the seafloor maps in Google Earth.
Credits: Scripps Institution of Oceanography/NOAA

CryoSat was launched in 2010 to measure sea-ice thickness in the Arctic, but data from the Earth-observing satellite have also been exploited for other studies.
High-resolution mapping of the topography of the ocean floor is now being added to the ice mission’s repertoire.

The main objective of the polar-orbiting CryoSat is to measure the thickness of polar sea ice and monitor changes in the ice sheets that blanket Greenland and Antarctica.
But the satellite’s radar altimeter is not only able to detect tiny variations in the height of the ice but it can also measure sea level.

The topography of the ocean surface mimics the rises and dips of the ocean floor due to the gravitational pull. 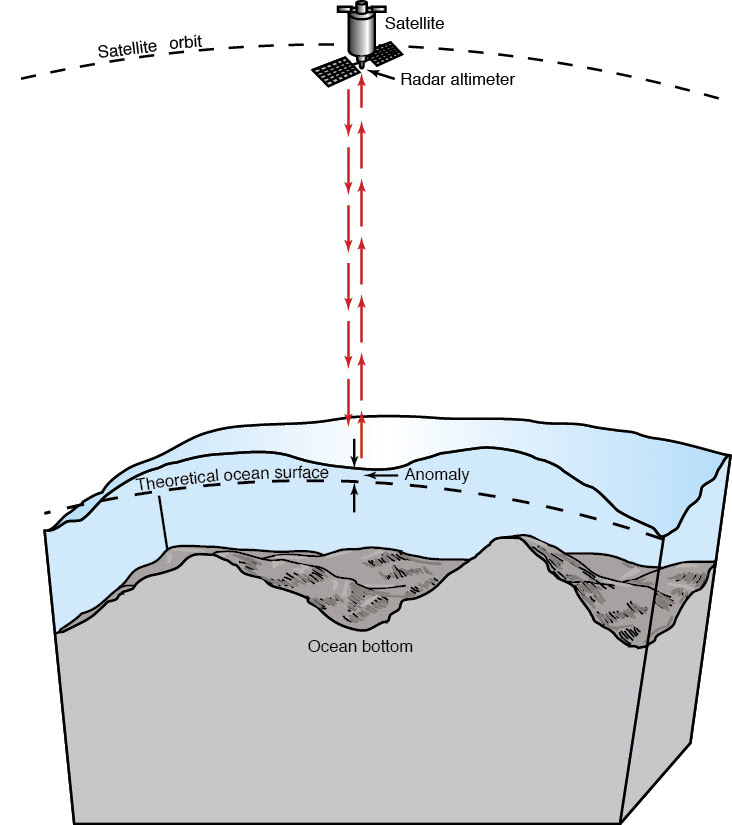 An Earth-orbiting radar cannot see the ocean floor, but it can measure ocean-surface height variations induced by the topography of the ocean floor.
The gravitational pull of the seafloor produces minor variations in ocean surface height.
Seafloor mapping by ships is much more accurate than radar altimeter mapping, but to date only 10% of the seafloor has been charted this way.
A complete mapping of the deep oceans using ships would take 200 ships navigating Earth, 24 hours a day, for an entire year at a cost of billions of dollars.
Mapping using satellite radars can cover a larger area in a shorter amount of time.
When interesting features are discovered in satellite measurements, they can later be surveyed in fine detail by ships.
Credits: Scripps Institution of Oceanography

Areas of greater mass, such as underwater mountains, have a stronger pull, attracting more water and producing a minor increase in ocean-surface height.

There have been several recent global gravity missions, such as ESA’s GOCE satellite, that provide extraordinarily accurate measurements of gravity at the spatial resolution of hundreds of kilometres.

CryoSat determines variations in the thickness of floating sea-ice so that seasonal and interannual variations can be detected.
The satellite also surveys the surface of continental ice sheets to detect small elevation changes.
Information on precise variations in ice thickness will further our understanding of the relationship between ice and climate change.
Credits: ESA /AOES Medialab

But CryoSat’s radar altimeter can sense the gravity field at the ocean surface, so that seafloor characteristics at scales of 5–10 km are revealed.
This is the first altimeter in 15 years to map the global marine gravity field at such a high spatial resolution.

Recent studies at the Scripps Institution of Oceanography in San Diego, USA, found that the range precision of CryoSat is at least 1.4 times better than the US's Geosat or ESA's ERS-1.

They estimate that this improved range precision combined with three or more years of ocean mapping will result in global seafloor topography – bathymetry – that is 2–4 times more accurate than measurements currently available.

“We know more about the surfaces of Venus and Mars than we do about the bathymetry of deep oceans,” said David Sandwell from the Scripps Institution of Oceanography in the US.
“This new mapping from CryoSat will revolutionise our understanding of ocean floor tectonics and reveal, perhaps, 10 000 previously uncharted undersea volcanoes.”

Most satellite radar altimeters such as the one on the joint CNES/NASA/Eumetsat/NOAA Jason-2 follow repeated ground-tracks every 10 days to monitor the changes in ocean topography associated with ocean currents and tides.

CryoSat’s 369-day repeat cycle provides a dense mapping of the global ocean surface at a track spacing of over 4 km.
Three to four years of data from CryoSat can be averaged to reduce the ‘noise’ due to currents and tides and better chart the permanent topography related to marine gravity.