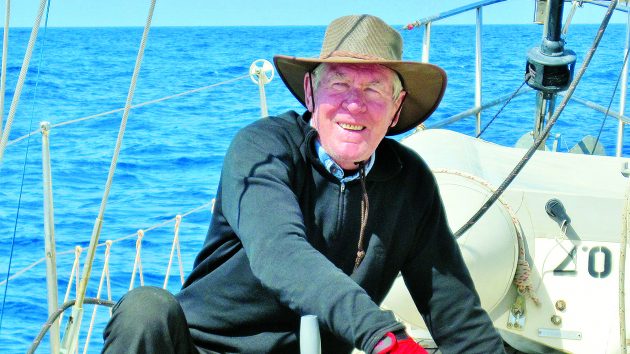 Rod Heikell grew up in New Zealand but started sailing in England before leaving for the Med in 1976. Credit: Rod Heikell

From YachtingMonthly by Nic Compton
Rod Heikell published his Greek Waters Pilot 40 years ago, opening up cruising in the Med to thousands. Nic Compton meets the legendary author

Rod Heikell: The accidental sailor
Sailing was a very different sport 40 years ago.
There was no GPS, no chartplotters, no AIS, no EPIRBs, and no Gore-Tex.

What was also lacking, at least for Mediterranean waters, were proper sailing guides with maps of harbours and details of local facilities.
There was of course Henry Denham but, wonderful as they were, his books were more romantic narratives than practical guides.
That all changed when the first Greek Waters Pilot appeared in 1982. 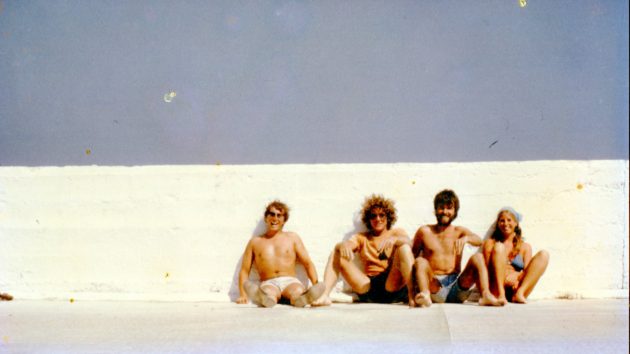 Rod Heikell spent the late 70s working on flotilla charters in Greece. Credit: Rod Heikell
In one move, Rod Heikell transformed the parameters of the cruising guide and created a modern, fit-for-purpose, comprehensive pilot that anyone could access.

It’s no exaggeration to say that his pilots (for the Greek edition was soon followed by editions for Italy, Turkey and France) helped democratise the sport and encouraged a new kind of sailor to get out and explore these idyllic areas.

It’s perhaps no coincidence that the first Rough Guide came out in the same year, for what the Rough Guide did for land travel, Rod Heikell did for the sea.

It’s an extraordinary achievement for a man brought up on the other side of the world, whose family had no interest in sailing and who was actively discouraged from reading throughout his childhood. 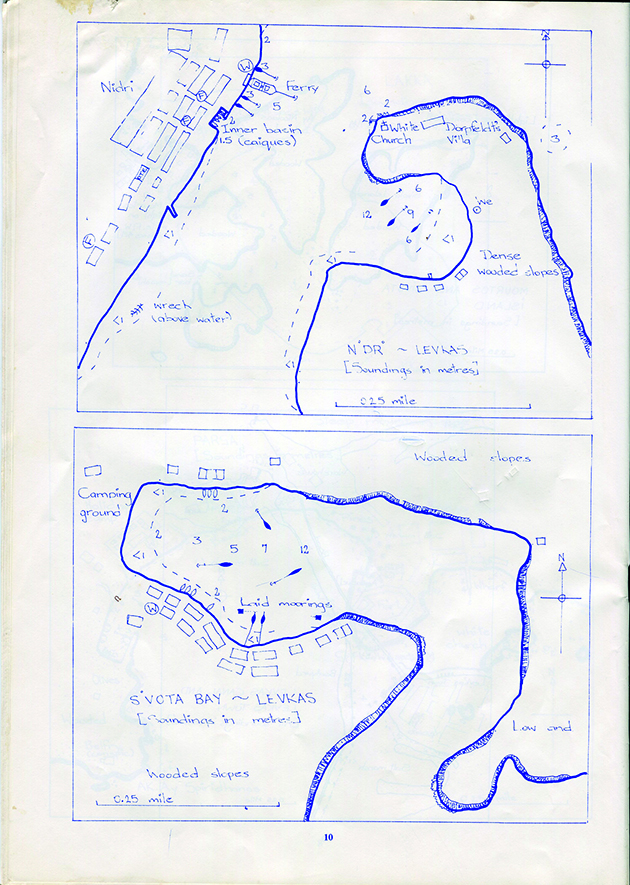 Although it’s a stunning location, with a long sandy beach and abundant wildlife, the town also boasts high rates of unemployment and social deprivation.

After the freezing factory closed down in 1952, the population – composed mainly of maoris from the Ngati Porou tribe – plummeted from 4,000 to under 400 nowadays.

Rod’s parents ran the fish and chip shop, the ice cream shop, the petrol station and the local taxi – though as Rod is quick to point out, ‘We’re not talking empires here; it was a tiny little place.’

Yet, despite living by the sea, Rod Heikell never went out on the sea.

No yachts ever visited the isolated bay, and the only local boats were a couple of open launches used for catching crayfish.

Rod’s only experience of boating was paddling on a pond on makeshift canoes made out of old sheets of corrugated iron.

And yet the sea was ever present.
Rod Heikell: Shaped by the sea

‘It was the sea that shaped our lives,’ he writes in his 2020 memoir By the Edge of the Sea. ‘We swam in it. We dived off the old wharf down in Waima. We fished surfcasting off the beach. Around the rocky shores there were lots of crayfish and kina, sea urchins. The salt of the sea flavoured our lives and somehow ingrained itself into our being.’

When Rod was nine, his parents separated and he went to live with his mother in a council house in Auckland.

Yet, despite living in one of the capitals of sailing, the family had little to do with boats – apart from one memorable occasion when, aged 15, Rod sailed to Coromandel and back on a 32ft wooden boat with some friends. 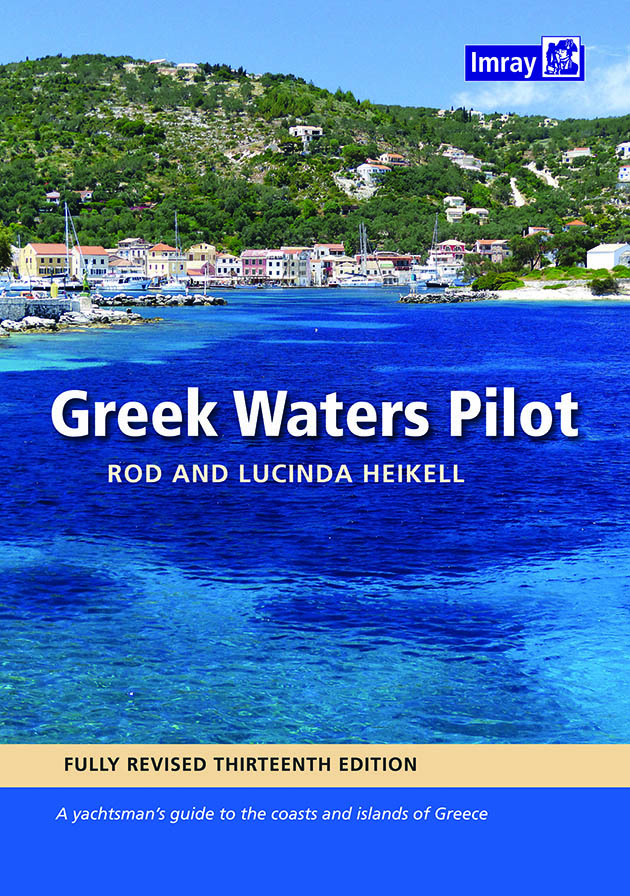 Greek Waters Pilot was Rod’s first book. Credit: Imray
‘On the way back, they gave me the tiller and sailing back through the night, the stars and everything else, it was magical. It was a one-off thing but it could be one of those folk memories that, in ways you least expect, fuels everything you do.’

Back in the real world, Rod managed to pursue a career in science, eventually getting a job in a timber treatment plant.

Two shocking events changed the direction of his life forever: the death of his beloved brother Douglas from muscular dystrophy, followed a few years later by his own diagnosis of skin cancer.

‘That sort of thing really wakes you up,’ he says. ‘I decided to see something of the world while I could.’

And so he headed to Europe, with the idea of completing his thesis on the history of science at Oxford University.

Instead, he started to get this ‘itch’. 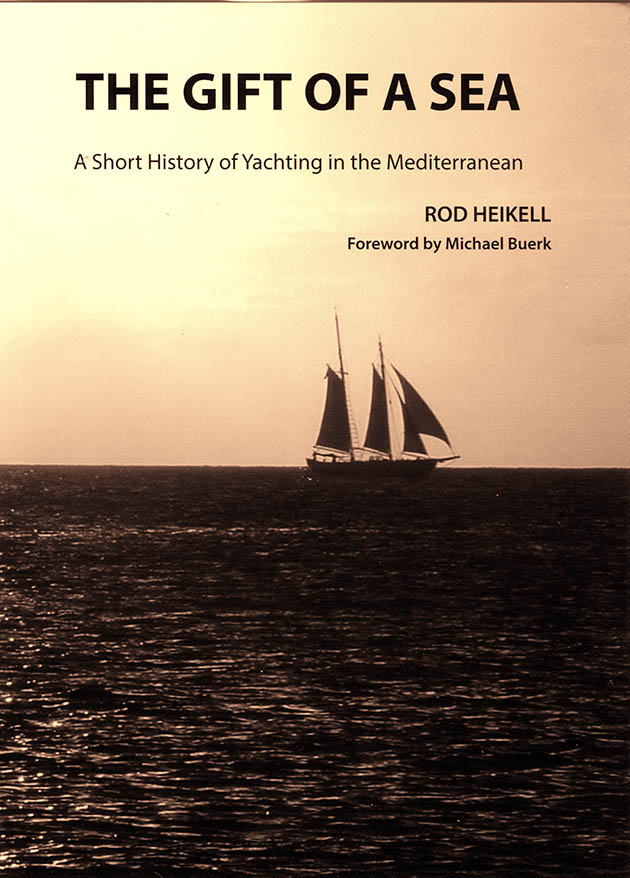 Rod has since written more pilot books and books.
More information at www.taniwhapress.com
Out of nowhere, he got fixated on the idea of sailing, and began reading about the subject obsessively.

Despite having almost no experience, he decided he had to buy a boat and go sailing.

With only £800 in his pocket, he scoured the coasts of England looking for a suitable vessel and eventually settled on a 20ft plywood sloop.

Roulette was powered by a 4hp Stuart Turner and had no electrics or electronics, no navigation lights and no lifejackets.

Despite this lack of facilities, Rod and his then girlfriend Bridget set off from Southampton in August 1976 and, after an event-filled voyage via the Brittany canals and the Canal du Midi, eventually fetched up in Greece in July 1977.

It was the beginning of a new era in sailing: the flotilla holiday.

After a few months working for a company based in the Ionian, Rod was headhunted by Crawford Perry Travel, a company setting up a rival operation in the Saronic Gulf.

For two years he guided, fixed and charmed a fleet of 18 Cobra 850s first around the Saronic Gulf and then the Ionian. 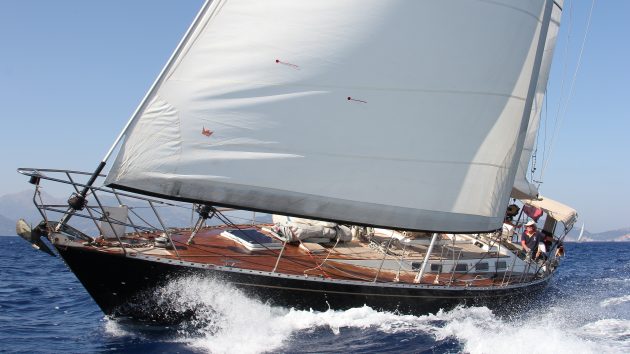 Rod and Lu Heikell have circumnavigated the world on their Cardinal 46, Skylax, providing plenty of material for the pilot books they now co-author. Credit: Kevin Jones
When he threatened to leave after the first year, the boss offered him his own Cobra 850 on very favourable terms. Rod agreed and stayed on another year.

It was seat-of-your-pants stuff. Rod had never visited many of the ports they went to and had to frantically research the place beforehand and make sure he arrived first to check the facilities so that he could play the knowledgeable host when the rest of the fleet arrived.

But Rod wasn’t a post-grad student for nothing.

He soon realised he could put that newly acquired knowledge to good use and started sketching maps of the harbours he visited and making notes about the facilities.

He turned these into a set of directions accompanied by some chat about the history of the place and the local cuisine, which CPT Cruising willingly printed to hand out to their customers. 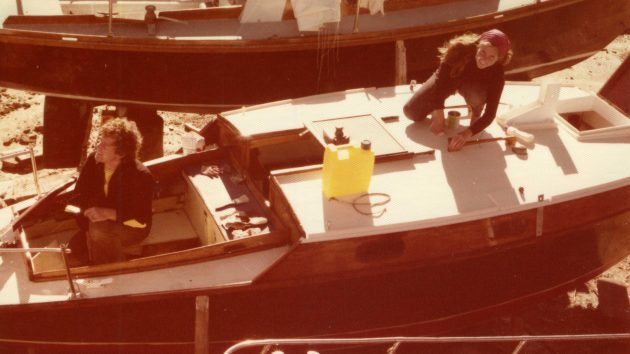 Rod’s 20ft plywood sloop Roulette in Christo’s boatyard, Levkas, Greece.
He bought her for £800 and sailed her from Southampton to the Med.
Credit: Rod Heikell
It didn’t take a huge leap of the imagination to realise that the concept could be turned into a book.

And so in March 1980 Rod set off on an epic tour of Greece, mostly on his own boat Fiddler’s Green.

He taught himself to draw maps using basic triangulation, and took soundings with the boat’s echo sounder and an improvised leadline.

By day, he collected data using a checklist of over 30 items, and by night typed up his notes on an old typewriter.

Along the way, he was arrested four times as a spy and, as he puts it, ‘lied a lot to some very nice policemen about being an innocent tourist who liked to fish’.
Life-changing literature

He arrived back in Levkas that Christmas Eve, having visited more than 200 places which, added to the chapters he had already written, amounted to some 275 harbours, maps and pilotage notes.

It was a mammoth task by any measure, and one which would change his life.

The Greek Waters Pilot was published in 1982 by Imray, Laurie, Norie and Wilson.

To anyone who was sailing in Greece at the time (as I was) it made a huge impact. It was bold, confident and undeniably modern – a clear harbinger of things to come. 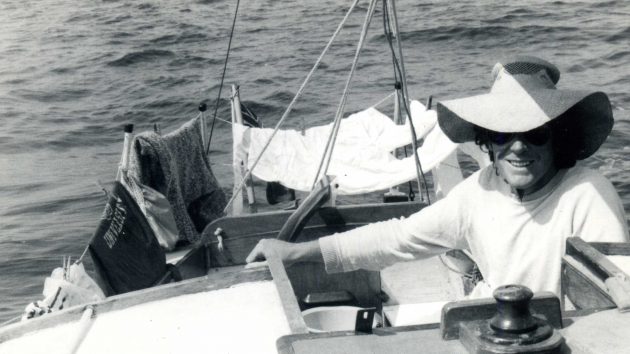 Rod Heikell spent 10 months cruising around Greece to research his Greek Waters Pilot.
Credit: Rod Heikell
Sales of the new pilot were slow to start with, but Rod went ahead and wrote the follow-up guides to Italy in 1982-3, Turkey in 1983-4 and France & Corsica in 1985.

Sure enough, from 1985 onwards sales were steady and have been, give or take a COVID-19 lockdown or two, ever since.

Meanwhile, Rod sold the Cobra 850 in 1982 and bought a 31ft Cheverton sloop called Tetranora, which he owned for 14 years.

As well as providing the means to research the rest of the Mediterranean guides, Tetra carried him through the breakup of his first marriage and on to a two-year cruise of India, Sri Lanka, Thailand and Malaysia, which resulted in the Indian Ocean Cruising Guide, published in 1999.
Three years at sea

Tetra was followed in 1996 by a 36ft Cheoy Lee GRP sloop which he named seven-tenths, a reference to the proportion of the world’s surface covered by sea.

In 2004, he married his current wife Lu (herself an experienced sailor and, it turned out, excellent electrician), and a few years later the couple set off around the world on their new boat Skylax, a Cardinal 46.

The voyage took them three years, via Panama, the Galapagos, the Marquesas, New Zealand, Indonesia, Southeast Asia, Oman and up the Red Sea back to the Med. 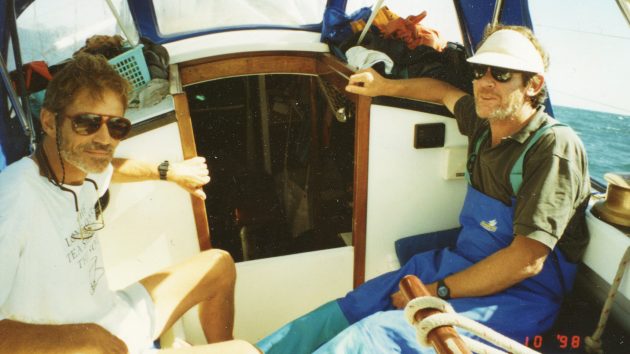 Sailing with his friend Colin in The Red Sea aboard his 31ft Cheverton sloop called Tetranora.
Credit: Rod Heikell
By the time they returned in 2010, they had enough material to completely revise and update their book Ocean Passages & Landfalls, published a few years earlier.

But, in the words of a famous song, life is what happens when you’re making other plans.

In 2012 Rod was diagnosed with tuberculosis and put on a massive dose of antibiotics.

Just like during the previous life-threatening episode, which brought him to Europe in the first place, Rod decided to do something positive in what he thought might be the final years of his life.

This time he decided to write more books – not his usual sailing fare but more personal books, this time published under his own label Taniwha Press. 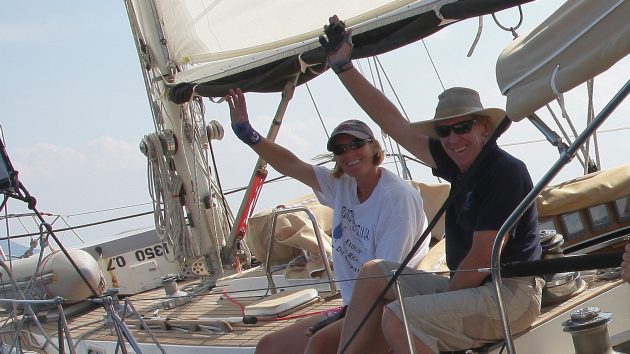 Rod Heikell met his wife Lu in 1999 when she joined him as crew on a trip from the Azores to Gibraltar. Credit: Kevin Jones
It started in 2013 with The Accidental Sailor, an account of his first voyage to Greece on Roulette and a later trip down the Danube on a Mirror Offshore 18.

That was followed two years later by Sailing Ancient Seas, about his trip to Southeast Asia on Tetra, and in 2019 by The Gift of a Sea, a 366-page history of yachting in the Mediterranean.

Nic Compton is a marine journalist, writer, photographer and former journeyman shipwright. He grew up on boats in the Med before returning to the UK to complete his formal education. A former magazine editor, he was written 20 books, mostly about boats. Credit: Will Stirling

As if that wasn’t enough, in recent years Rod has taken to writing fiction under the pseudonym JC Graeme.

His first fictional work was the 2016 My Name Is No One, a strangely captivating retelling of Homer’s Odyssey, with Odysseus recast as a barfly and Homer the slightly creepy landlord buying Odysseus’s stories with jugs of Koan red wine.

That was followed by To Ithaca, the story of a man in search of his missing brother, set against the background of the Colonels’ brutal regime in Greece in the 1970s.

It’s quite an oeuvre: 25 books over 40 years, most of them still in print.

Yet Rod Heikell is modest about his achievements.

As he told one sailing magazine, referring to his work researching the original Greek Waters Pilot: ‘It’s hardly the labour of Sisyphus! Sisyphus didn’t get to sail into lovely places and sit with a cold glass of wine and a plate of meze, looking out over the sea.’

And that, my friends, is Rod Heikell.
Links :
Posted by geogarage at 1:37 AM