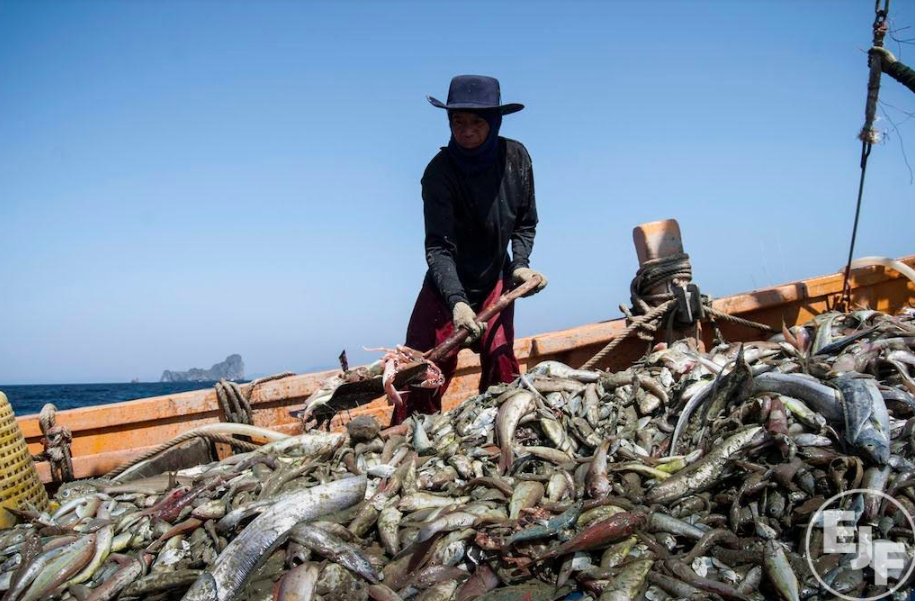 A Cambodian migrant worker aboard a Thai trawler targeting trash fish – to be made into fishmeal – in the Andaman Sea.
Image Credit: EJF

From The Diplomat by James X. Morris

A new EJF report finds widespread violations in the global seafood industry, including in Taiwan, Vietnam, and elsewhere in Asia.

A new report from the Environmental Justice Foundation (EJF) should be cause for alarm for many leaders in the Indo-Pacific.
Entitled “Blood and Water: Human rights abuse in the global seafood industry,” the report provides the latest information on “cases of slavery, debt bondage, insufficient food and water, filthy living conditions, physical and sexual assault, and even murder” occurring on fishing vessels flying flags from 13 countries, both developing and developed, from Asia and South America to the European Union and United States.
Such labor abuses are a result of dwindling fish stocks in overexploited oceans, forcing the industry to rely on cheap labor in order to turn profits.
Out on the high seas, the potential for abuse and exploitation remains high.
The result is a global nontraditional security crisis in the making.

Illegal, unregulated, and unreported (IUU) fishing and labor exploitation is rampant in the global fishing industry, particularly because of the difficulty of monitoring activities on the vast high seas.
Asia appears to be at the epicenter of the global fisheries crisis.
In the past I have written reports for The Diplomat on labor issues in Taiwan’s fishing fleets, Thailand’s efforts to halt poachers from neighboring countries in its waters, and the impounding of the Fuh Sheng No. 11 in Kaohsiung Port in southern Taiwan, following a global effort involving South Africa and Indonesia to track down the vessel for labor violations and unsafe conditions under the International Labor Organization’s (ILO) Work in Fishing Convention (C188) in 2018.
These reports are a drop in the bucket, only snapshots of a greater problem.

“Our report highlights profoundly concerning truths about the fishing industry globally, highlighting how illegal and unscrupulous operators are running operations based on the abuse of workers and the illegal and unsustainable exploitation of marine fisheries,” EJF’s Executive Director Steve Trent said in a statement issued by EJF.
The report highlights forgeries among the flag of convenience practice (registering a vessel in a country other than where it is owned and operated); in one example, nine Taiwanese tuna long-liners using forged papers claiming registration in Bolivia were impounded in Thailand in 2016.
“Stateless vessels” are another thorn in the sides of regulators and watchdogs; such ships act with impunity on the high seas, and are only caught when needing repairs in port.
Brokerage systems provide fishing vessels from more developed countries with indebted, indentured laborers from developing states, who are then forced into debt with garnished wages aboard ships with poor conditions and little opportunity to escape. 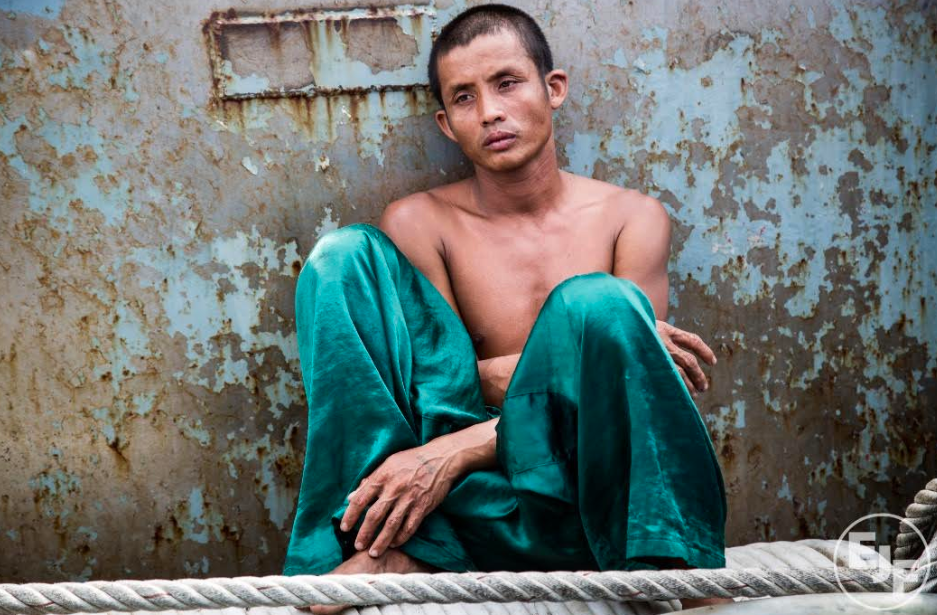 A Burmese worker aboard a Thai trawler operating in the Andaman Sea.Photo courtesy of EJF.

I asked Trent to elaborate on EJF’s work in Taiwan and provide an update on the island’s fisheries for The Diplomat.

“Since the Fuh Sheng [No.] 11 case, Taiwan has made positive steps forward in improving its regulations to make its fleet more transparent,” Trent said.
“For instance, they have started the process of publishing information on licensed vessels and bringing their law in line with the critical [C188 convention].”

He indicated, however, that EJF monitors in Taiwan are continuing to find cases of IUU fishing and trafficking in the industry, and bring the cases to the government.
“We hope they are thoroughly and urgently investigated and that vessel operators are sanctioned where appropriate,” Trent stated.
The NGO urges Taiwanese authorities to implement measures for abused fishers to raise the alarm, and to better monitor the industry to make certain destructive IUU practices no longer occur in its fisheries.

In late 2015, tuna prices hit a low on both sides of the Pacific, forcing Taiwanese long-liners to either remain in port to avoid fuel expenses or remain farther out at sea — where abuses are more common — for longer periods.

Elsewhere in the Asia-Pacific, Vietnam has one of the fastest growing fishing fleets, typically small vessels that do not require the mandated tracking devices of larger boats.
Due to the collapse of the local market, these vessels set out to capture highly prized species for the Chinese market with little oversight.
The report outlines 14 countries in the region that have made arrests of illegal vessels from Vietnam, forcing the European Commission to issue a yellow card.

The issue extends much farther into the Pacific, however.
The report outlines the detainment of migrant workers, primarily from Indonesia, the Philippines, and Kiribati, onboard tuna long-liners in the waters around Hawaii.
Despite working on U.S.-flagged vessels, these migrant workers do not have visas to enter the United States; doing so would be illegal.
Honolulu is a hub for some 140 such vessels, and when in port the workers must be “detained onboard,” with passports seized by captains to take advantage of a legal loophole.

The report indicates the seafood industry makes up approximately 9 percent of global agriculture exports, with trade valued at $152 billion in 2017.
In some countries, seafood accounts for 40 percent of total trade value.
Fish consumption has grown from 9.9 kilograms per capita in the 1960s to 20.5 kg per capita in 2017.
The result is that employment in this sector has expanded despite the depletion of global fish stocks.

EJF indicates one third of fish stocks are being exploited at unsustainable levels, with “a further 60 percent of fisheries on edge” and at risk according to the report.
Another recent report by the Asia Maritime Transparency Initiative has found Chinese clam harvesting fleets have returned to the South China Sea in greater numbers, wreaking havoc upon coral reefs to feed the nation’s seemingly insatiable desire for endangered giant clams.

In a statement EJF has proposed a list of 10 “logistically deliverable, low-cost measures” that could transform the way the global industry operates.
Such measures include promoting greater transparency, including giving all vessels unique tracking numbers with public tracking data, digitally and publicly listing vessel information, and making documentation of vessels and infractions publicly available, among other solutions.
Such measures could help provide consumers with information about where their food and goods originate, providing the public with information to make ethical market decisions.

Time is of the essence, however, for both exploited laborers and dwindling fish stocks.