Existing maps show only rough outlines of coastal areas (top left: Western Part of Wakasa Wan (Bathymetric Chart 6337-4), courtesy of Japan Hydrographic Association), but new technology has made it possible to capture the topography of reefs in detail (top right) and create 3D images (bottom right)
From Hydro
The ‘Umi-no-Chizu’ (‘Map of the Sea’) project will use aerial measurement to map 90% of Japan’s shallow coastal waters (to a depth of 20m).
This is a joint project by the Japan Hydrographic Association (JHA) and The Nippon Foundation.

Regulatory, administrative management and jurisdiction issues have meant that less than roughly 2% of Japan’s coastal waters have been mapped to date.
This has held back research and technological advances in fields including marine accidents, disaster prevention and mitigation, blue carbon, and understanding and preserving biodiversity.
This project with JHA is part of The Nippon Foundation’s ongoing work to address these issues.

The project is Japan’s first to use airborne Lidar bathymetry (ALB), and aims to create ‘ocean maps’ of roughly 90% of Japan’s approximately 35,000km of coastline over roughly ten years.
So far, JHA has been unable to map these shallow waters in detail.
This project has a total budget of 20 billion yen.
The Nippon Foundation, which has been working for many years to build a foundation and develop human resources for handing over the bounty of the ocean to future generations, will use the maps created by the project to promote interest in and understanding of the ocean, especially among children. 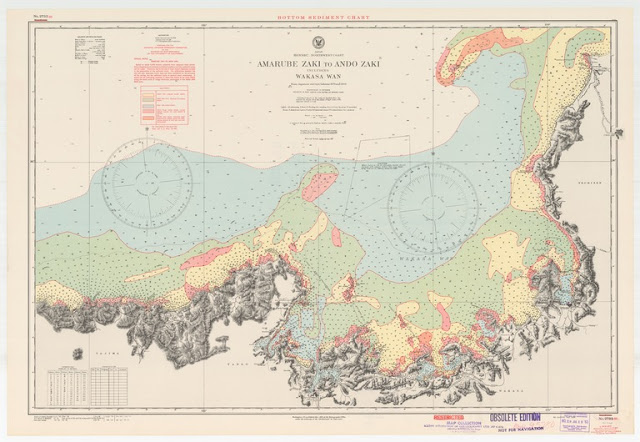 Traditionally, topographical measurements of Japan’s shallow coastal waters (depths of 0 to 20m) have been made primarily from ships.
In recent years, it has become possible to make these measurements from aircraft, but currently less than roughly 2% of Japan’s coastal waters have been measured using ALB.
The underwater topographical information taken from aircraft is highly precise, and can be used to create much more detailed maps than is possible using measurements from ships.
Detailed underwater topographical information obtained over wide areas will be used to create a database for understanding various events that occur in the ocean, and this is expected to lead to a better understanding of the ocean in fields including the prevention of marine accidents and disaster prevention and mitigation, while enhancing research and technologies related to understanding and preserving biodiversity and environmental education. 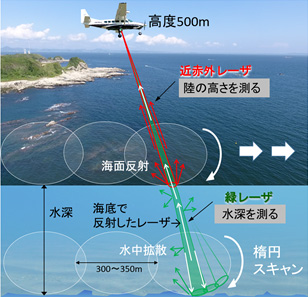 The airborne Lidar bathymetry being used in this project emits infrared and green lasers from the air to take underwater topographical measurements in areas where the water is highly transparent, to depths of roughly 20m.
This makes it possible to collect seamless data from land to shallow waters where it is difficult to take measurements from ships, and to collect detailed data over large areas with a high degree of efficiency.
Time to Protect the Ocean’s Bounty

Throughout history, people have lived with the ocean, which has brought people together and been a bridge across nations, languages and cultures.
In addition to marine resources, people benefit from the ocean’s role in the weather and climate.
Recently, however, climate change and other factors have caused changes in the ocean environment, creating an unprecedented ecological crisis and weakening the relationship between people and the ocean.
Historically, humans have used the ocean, but going forward it will be necessary for people to take it upon themselves to protect it.
This project therefore seeks to create ocean maps that also incorporate knowledge, to create ties between people and the ocean, protect the ocean’s bounty, and pass these on to future generations.