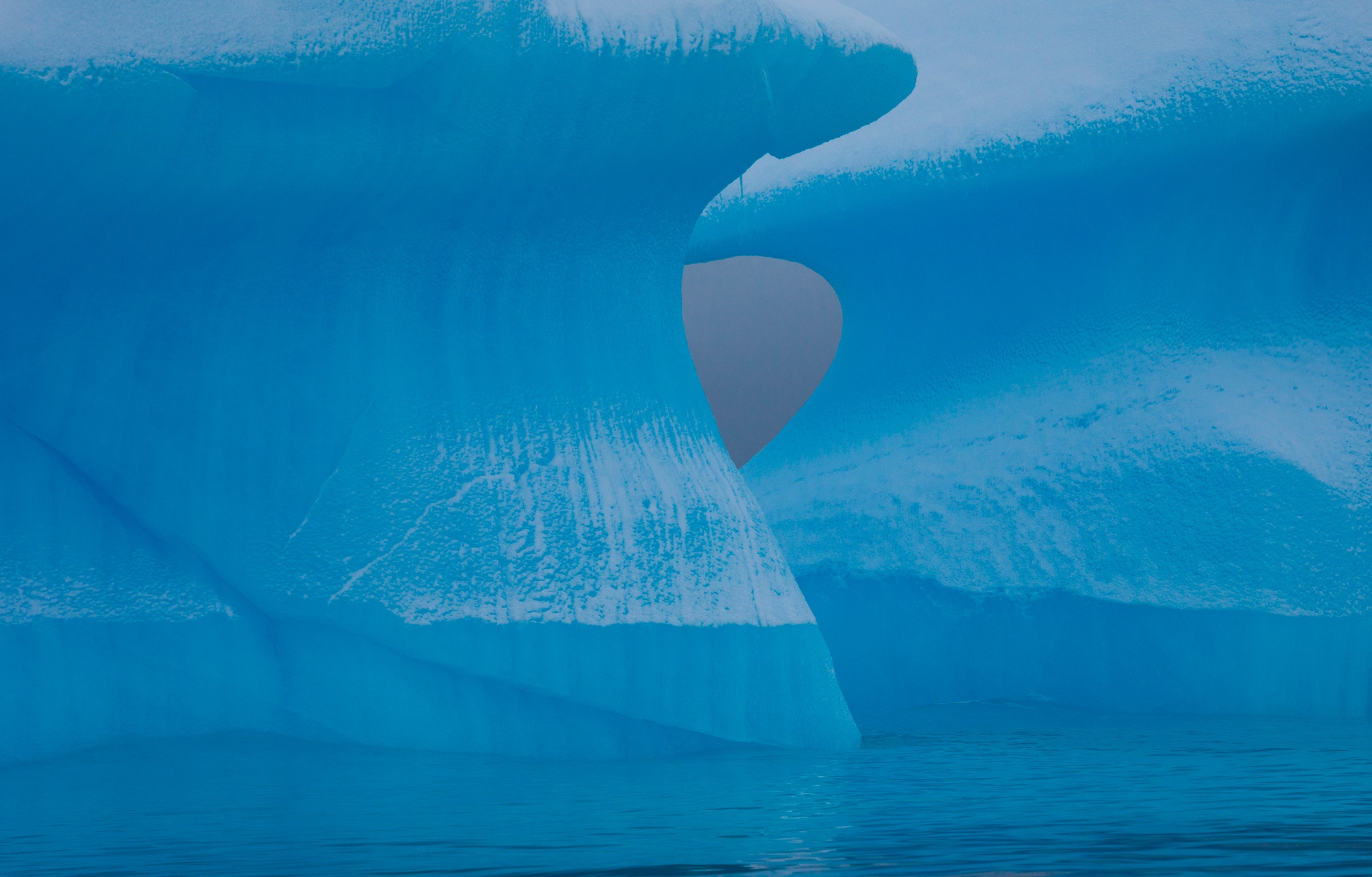 Researchers just found that, at the base of Antarctica’s ice, an area the size of Germany and France combined is feeding meltwater into a super-pressurized, 290-mile-long river running to the sea.
Photograph: Getty Images
From Wired by Matt Simon

A super-pressurized, 290-mile-long river is running under the ice sheet.
That could be bad news for sea-level rise.

For all its treacherousness and general inclination to kill you, Antarctica’s icy surface is fairly tranquil: vast stretches of miles-thick whiteness, with not a plant or animal to speak of.
But way below the surface, where that ice meets land, things get wild.
What scientists used to think was a ho-hum subglacial environment is in fact humming with hydrological activity, recent research is revealing, with major implications for global sea-level rise.

Researchers just found that, at the base of Antarctica’s ice, an area the size of Germany and France combined is feeding meltwater into a super-pressurized, 290-mile-long river running to the sea.
“Thirty years ago, we thought the whole of the ice pretty much was frozen to the bed,” says Imperial College London glaciologist Martin Siegert, coauthor of a new paper in Nature Geoscience describing the finding.
“Now we're in a position that we've just never been in before, to understand the whole of the Antarctic ice sheet.”

Antarctica’s ice is divided into two main components: the ice sheet that sits on land, and the ice shelf that extends off the coast, floating on seawater.
Where the two meet—where the ice lifts off the bed and starts touching the ocean—is known as the grounding line.

But the underside of all that ice is obscured.
To find out what’s going on below, some scientists have hiked across glaciers while dragging ground-penetrating radar units on sleds—the pings travel through thousands of feet of ice and bounce off the underlying seawater, so the researchers can build detailed maps of what used to be hidden.
Others are setting off explosions, then analyzing the seismic waves that come back to the surface to indicate whether there’s land or water below.
Still others are lowering torpedo-shaped robots through boreholes to get unprecedented imagery of the underside of the floating ice shelf.
Up in the sky, satellites can measure minute changes in surface elevation, which indicates the features below—a swell, for instance, might betray a subglacial lake.

This new research on the subglacial river used radar data from aircraft flying over Antarctica.
The scientists paired that data with complex modeling of the area’s unique “basal” hydrology, like how water is expected to move underneath miles of ice.

As the scientists found out, it moves very weirdly.
Because there can be miles of ice resting on Antarctica’s land, and because the region isn’t warming as fast as the Arctic, the ice doesn’t melt the way you might think, from the sun striking the surface.
That’s the way it works in places like Greenland, where ever-warming temperatures are creating lakes on the surface of the ice, and that water then leaks down through crevasses, known as moulins.

But in Antarctica, the basal melt instead comes from the land warming the ice.
While it’s not volcanically boisterous, Antarctica has enough geothermal heat to get melt going.
Further heat is provided by friction, as the ice grinds across bedrock.
That means that instead of the melt happening top down, it happens at the bottom.

It’s not a tremendous amount of melt per square foot.
But over an area that’s the size of two large European countries, that scales up.
“What we concluded is the melting is really small—it's like a millimeter per year,” says Siegert.
“But the catchment is enormous, so you don't need much melting.
That all funnels together into this river, which is several hundred kilometers long, and it's three times the rate of flow of the river Thames in London.”

That water is under extreme pressure, both because there’s a lot of ice pressing down from above and because there isn’t much room between the ice and the bedrock for the liquid to move around.
“And because it's under high pressure, it can act to lift the ice off its bed, which can reduce friction,” Siegert says.
“And if you reduce that basal friction, the ice can flow much quicker than it would do otherwise.”
Think of that ice like a puck sliding across an air hockey table, only instead of riding on air, the ice is riding on pressurized water.

This massive hidden river, says University of Waterloo glaciologist Christine Dow, lead author of the new paper, “can pump a huge volume of fresh water into the ocean.”
And that could be bad news for the glacial ice sheet’s connection to the floating ice shelf.
“Where the ice begins to float is the most sensitive region,” she continues.
“So anything that is going to change where that grounding line rests is going to have significant control on how much sea level rise we have in the future.”

What’s holding the ice sheet back—and keeping sea levels from jumping many feet—is the ice shelf, which acts like a big, heavy cork to slow the flow of a glacier into the sea.
But in Antarctica, these corks are fragmenting, as warming waters eat away at the underside of them.
The ice shelf of Antarctica’s Thwaites Glacier (aka the Doomsday Glacier), for instance, could crumble in three to five years, recent research suggests.
If we lost Thwaites entirely, it alone would contribute two feet to sea levels.

It’s not just Thwaites.
Researchers are finding that many of Antarctica’s grounding lines are receding, like hairlines.
Yet models that predict the future state of these glaciers assume that grounding lines are static.
Scientists already know that those models are missing another key factor that may affect how well these lines can hold: an effect known as tidal pumping.
When tides go in and out, they heave the ice shelf up and down, allowing warm seawater to rush inland and melt the underside of the ice.
This new research now shows that pressurized meltwater is also coming from the other direction, flowing from inland to the grounding line.

“The problem is, if you have a lot of fresh water being pumped into the ocean, it buoyantly moves up toward the base of the ice, and it's dragging warm ocean water up with it, melting that ice,” says Dow.
“That causes that grounding line to retreat.
And then all of the ice that was formerly grounded is now floating to instantly add to sea level rise and destabilize the whole system.” In other words, the ice doesn’t have to melt to raise water levels, because its massive bulk displaces liquid too.

Another concern is what will happen if Antarctica’s ice starts behaving more like Greeland’s—melting from the top.
In that scenario, crevasses would open up in the glacial ice during the summer, allowing water to pour down to the bedrock, supercharging the subglacial hydrology.
“There's likely to be surface melt at some point in the future, probably within the next 100 years,” says Dow.
“If that water is able to get to the base of the ice, then we could have a system that's a lot more like Greenland and a lot more seasonally driven. We don't really know what that's going to do yet.”

“This article is a notable contribution to our understanding of how the veins and arteries of fresh water beneath the Antarctic ice sheets may look and act,” Penn State glaciologist Nathan Stevens, who wasn’t involved in the paper, emailed WIRED from Antarctica, where he’s conducting his own research.
“Subglacial hydrology is one of the big players in how ice sheets behave—now, in the future, and in the past.”

If there’s any good news in this situation, says University of Houston physicist Pietro Milillo, it’s that scientists are gathering ever more data on the hitherto hidden dynamics playing out beneath Antarctica’s ice.
“This paper adds a piece to the puzzle of understanding what's actually going on at the grounding line,” says Milillo, who studies Antarctic glaciers but wasn’t involved in the research.

Previously, Milillo says, there was a mismatch between the satellite data and the models.
The elevation changes that satellites were measuring from space would suggest more ice loss than the amount of melt that models predicted seawater would cause at the grounding line.
Now, he says, it’s clear the satellites were right.
“We can actually account for that,” Milillo says, “because it's fresh water that's melting the glaciers from the bottom.”
Links :
Posted by geogarage at 1:23 AM