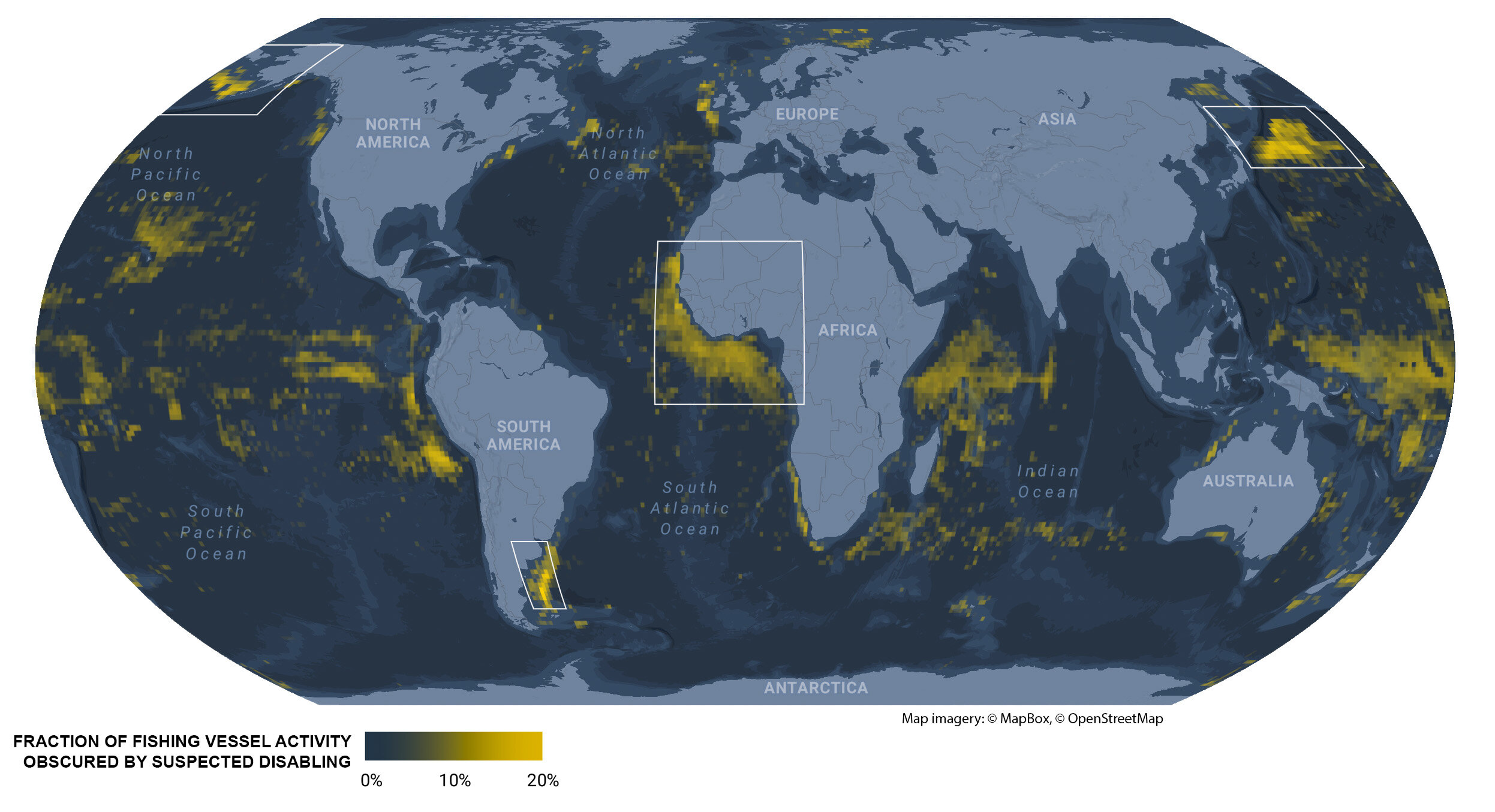 This map shows the estimated total fishing vessel activity and the amount of this activity obscured by suspected disabling of automatic identification systems in areas with sufficient satellite reception.
Areas with highest fishing vessel activity and the highest fraction of activity obscured by disabling occur in three regions of concern for illegal, unreported and unregulated fishing: near Argentina and West Africa, and in the Northwest Pacific.
In contrast, fisheries in waters near Alaska are some of the most intensively managed in the world.
Credit: Global Fishing Watch
From PHYS by University of California
Data from the shipboard Automatic Identification System (AIS), which was created as a collision avoidance tool, can provide information about global fishing activity, including illegal, unreported, and unregulated fishing.
Fishing vessels may disable their AIS devices, but a new analysis identifies intentional disabling events in commercial fisheries and shows that, while some disabling events may be for legitimate reasons, others appear to be attempts to conceal illegal activities.

The new study, published November 2 in Science Advances, presents the first global dataset of AIS disabling in commercial fisheries, which obscures up to 6% of vessel activity.

First author Heather Welch, a project scientist in the Institute of Marine Sciences at UC Santa Cruz, worked on the study with researchers at Global Fishing Watch, which maintains an AIS dataset of vessel activity, and NOAA Fisheries.
After Global Fishing Watch developed a way to distinguish intentional disabling from gaps in satellite coverage and other technical issues, Welch used a machine learning method to identify four primary reasons for AIS disabling.

"There are some legitimate reasons why vessels disabled their AIS, but we found two situations in which it is done for potentially nefarious reasons, either to fish in unauthorized locations or to obscure unauthorized transshipments," she said.
"This dataset is now operationalized, and the data are produced in real time, so it can be used to target inspections and improve fisheries management." Estimated total fishing vessel activity and the fraction of this activity obscured by suspected disabling events.
Panels A, C, E, and G show the gear types with the most time obscured by disabling events; panels B, D, F, and H show the flag states with the most time obscured by disabling events.
Only areas with sufficient satellite reception quality (>10 positions/day) are shown.
For the study, the researchers identified over 55,000 suspected intentional disabling events between 2017 and 2019, obscuring nearly 5 million hours of fishing vessel activity.
More than 40% of the total hours obscured by suspected AIS disabling occurred across four hotspots, three of which are areas of concern for illegal fishing: the Northwest Pacific and areas adjacent to the Exclusive Economic Zones (EEZs) of Argentina and West African nations.
These areas contain rich fishing grounds with limited management oversight.

"AIS data can tell us a lot, but so can the lack of it," said coauthor Tyler Clavelle, a data scientist at Global Fishing Watch.
"We might not always be able to see what vessels are doing, but knowing when they're intentionally hiding their movements provides valuable information that managers and scientists didn't have before.
Having a better understanding of where vessels may hide their position allows authorities to deploy valuable on-the-water resources more strategically, supporting improved fisheries management."

Disabling events were concentrated in waters adjacent to EEZ boundaries, suggesting that vessels may be disabling AIS before entering unauthorized locations to fish illegally.
In many cases, vessels go dark as they approach the edge of an EEZ where they are not authorized to fish, Welch said.
"For example, you might see a Korean-flagged vessel heading toward Argentina, and then it goes dark in international waters just outside of Argentina's EEZ," she said.

Notably, disabling was particularly common within and adjacent to EEZs with overlapping claims, such as the Falkland/Malvinas Islands that are disputed by the U.K. and Argentina.
The political conflicts in these regions may create blind spots for enforcement.

Disabling events were also common in areas with high transshipment activity, where boats transfer their catches to refrigerated cargo vessels.
Transshipment can be an efficient way to get the catch back to shore and resume fishing quickly, but it can also be used to obscure illegal fishing activity, effectively "laundering" the illegal catch through the cargo vessel.
In addition, it can enable forced labor on fishing boats that never visit ports. Two examples of fishing vessels disabling their AIS devices to obscure their activities from oversight.
(A) The Oyang 77 disabled its AIS device nine times (the last three of which are shown in insets) adjacent to the Argentinean EEZ (gray shading) before being apprehended by Argentinian coast guard and escorted back to port (yellow star).
(B) A fishing vessel disabled its vessel-based AIS device but left its gear-mounted device broadcasting, showing transhipment with a refrigerated cargo vessel during the disabling event.
The study also found evidence that some disabling is done for legitimate reasons by vessels engaged in legal activities.
In some cases, Welch said, AIS disabling may be done to hide the locations of good fishing grounds from competitors.
The fourth disabling hotspot was caused by U.S. trawlers disabling in U.S. waters off the coast of Alaska.
"This is one of the most intensely managed fishing grounds in the world, and these events likely constitute location hiding from competitors," she said.

The other legitimate reason for disabling AIS is for protection from piracy.
"Using a database of historical attacks, we can see that vessels switch off AIS in these historically dangerous waters, and that may be so that pirates aren't able to track and intercept them," Welch said.

The approach demonstrated in this study could be used to support surveillance and enforcement efforts.

"This new dataset is an untapped resource that provides a real opportunity to detect previously unobserved behaviors and illegal fishing activities," Welch said.
"Authorities could use this information to decide where to send surveillance drones or patrol vessels, and it could also be used to focus port inspections on vessels that have disabled AIS adjacent to EEZ boundaries or in transshipment hotspots."

In addition to Welch and Clavelle, the coauthors of the paper include Timothy White, Jennifer Van Osdel, Timothy Hochberg, and David Kroodsma at Global Fishing Watch; Megan Cimino, an assistant researcher at the Institute of Marine Sciences and assistant adjunct professor of ocean sciences at UCSC; and Elliott Hazen, assistant adjunct professor of ecology and evolutionary biology at UCSC.
Links :
Posted by geogarage at 1:13 AM