The battle for Snake Island 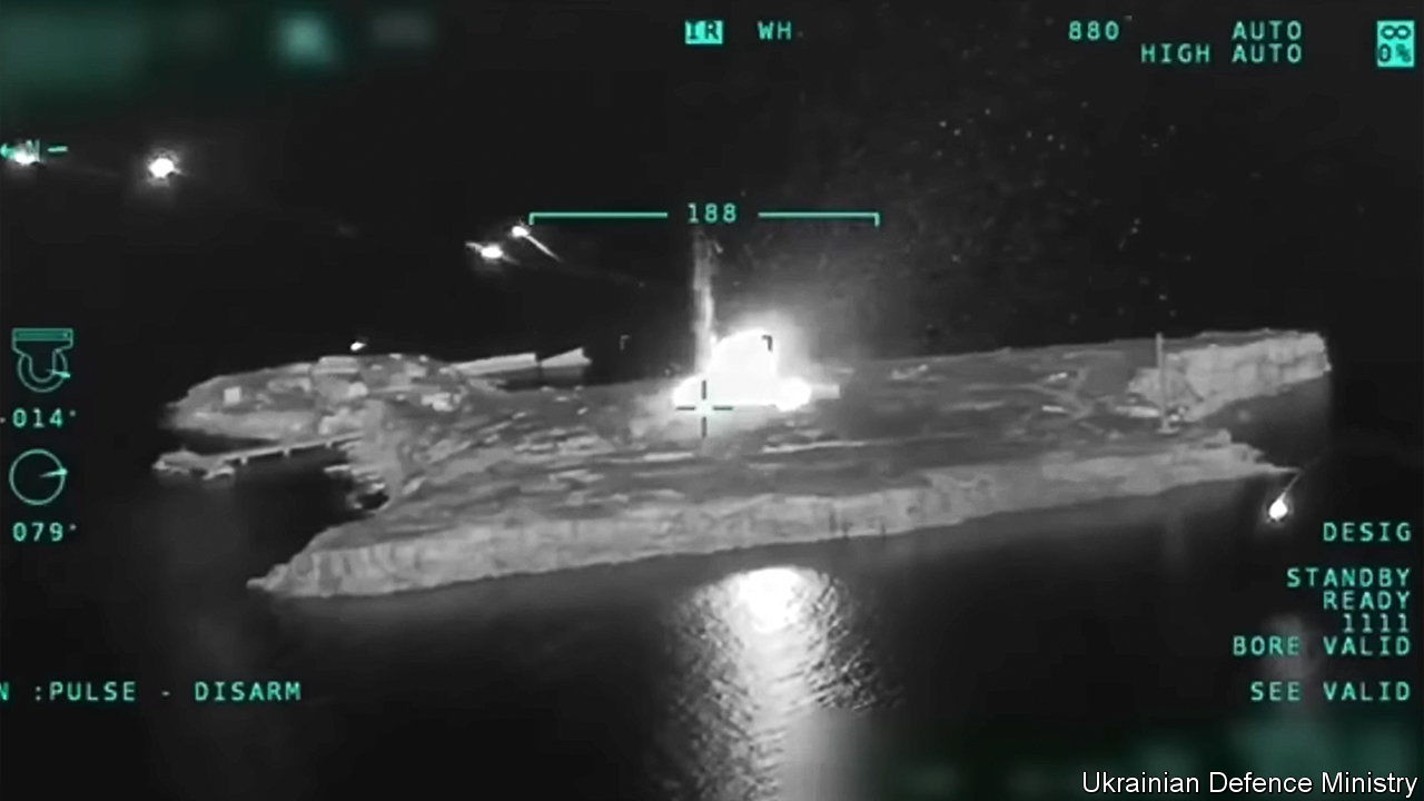 Ukraine is stepping up its attacks on the strategically important rock

For a rock just twice the size of Alcatraz, Snake Island has played a surprisingly big role in the war in Ukraine.

The fortress was a target from day one, when Russia’s Black Sea flagship, the Moskva, arrived at its shores to request the surrender of its tiny guardpost.
The garrison’s famously impolite refusal became a rallying cry for the country.
The sinking of the Moskva in April, in turn, saw the rock take on a new defensive significance for Russian vessels in the Black Sea.
In the days that followed the sinking, the island was fortified with new anti-aircraft, missile and radar systems.
Ukraine responded when it could, using what it could: fighter jets, Bayraktar drones and anti-ship missiles.
But the Russians did not budge.
Ukrainian forces strike Russian missile systems on Snake Island
Ukraine now appears to be launching a new offensive to wrest back control.
An early morning attack on June 20th targeted the island and nearby gas platforms that Russia has reportedly been using as a radar and surveillance station.
The explosions were so loud they woke residents of Vylkove, the nearest settlement, 35km away on the mainland. 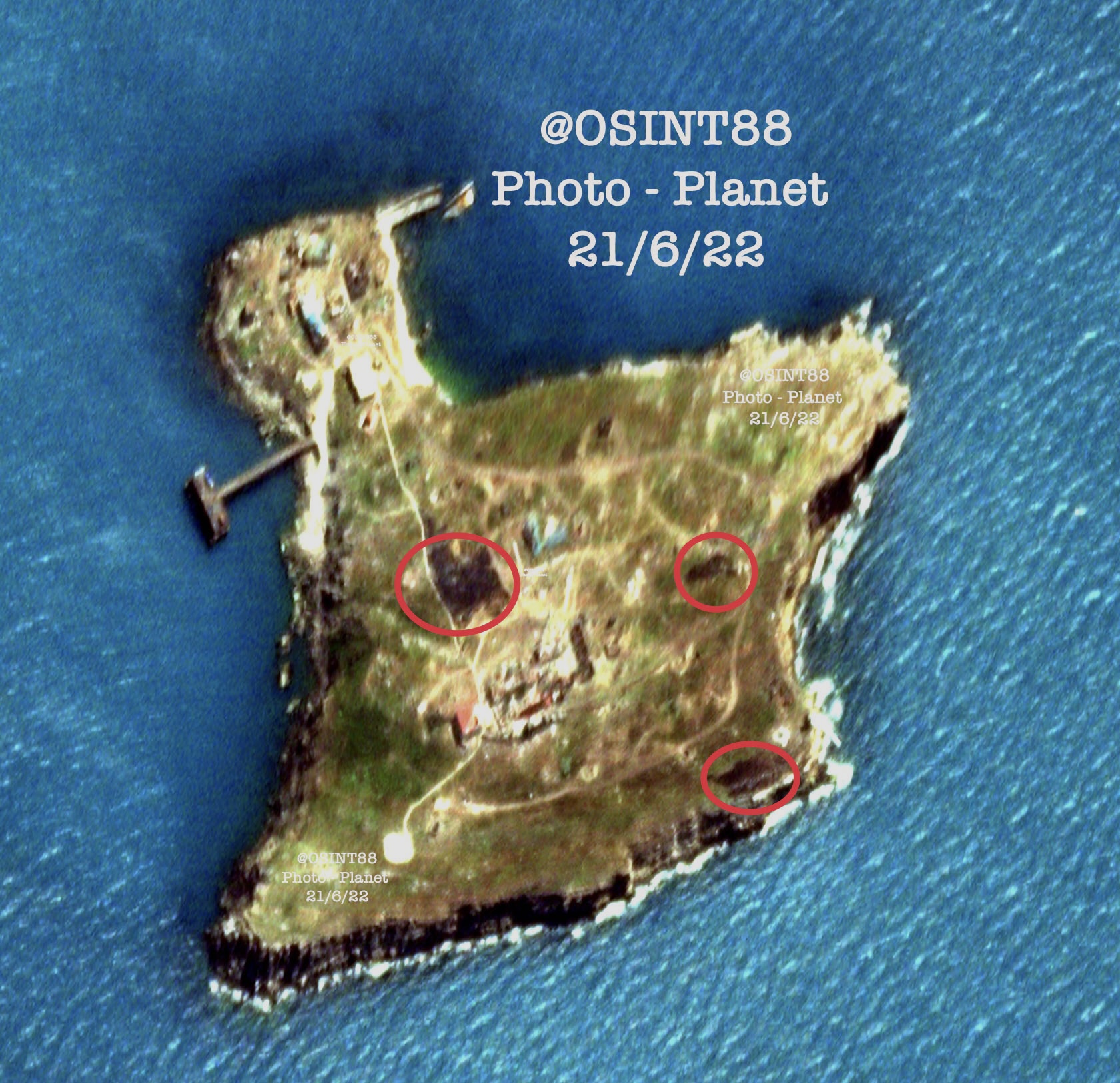 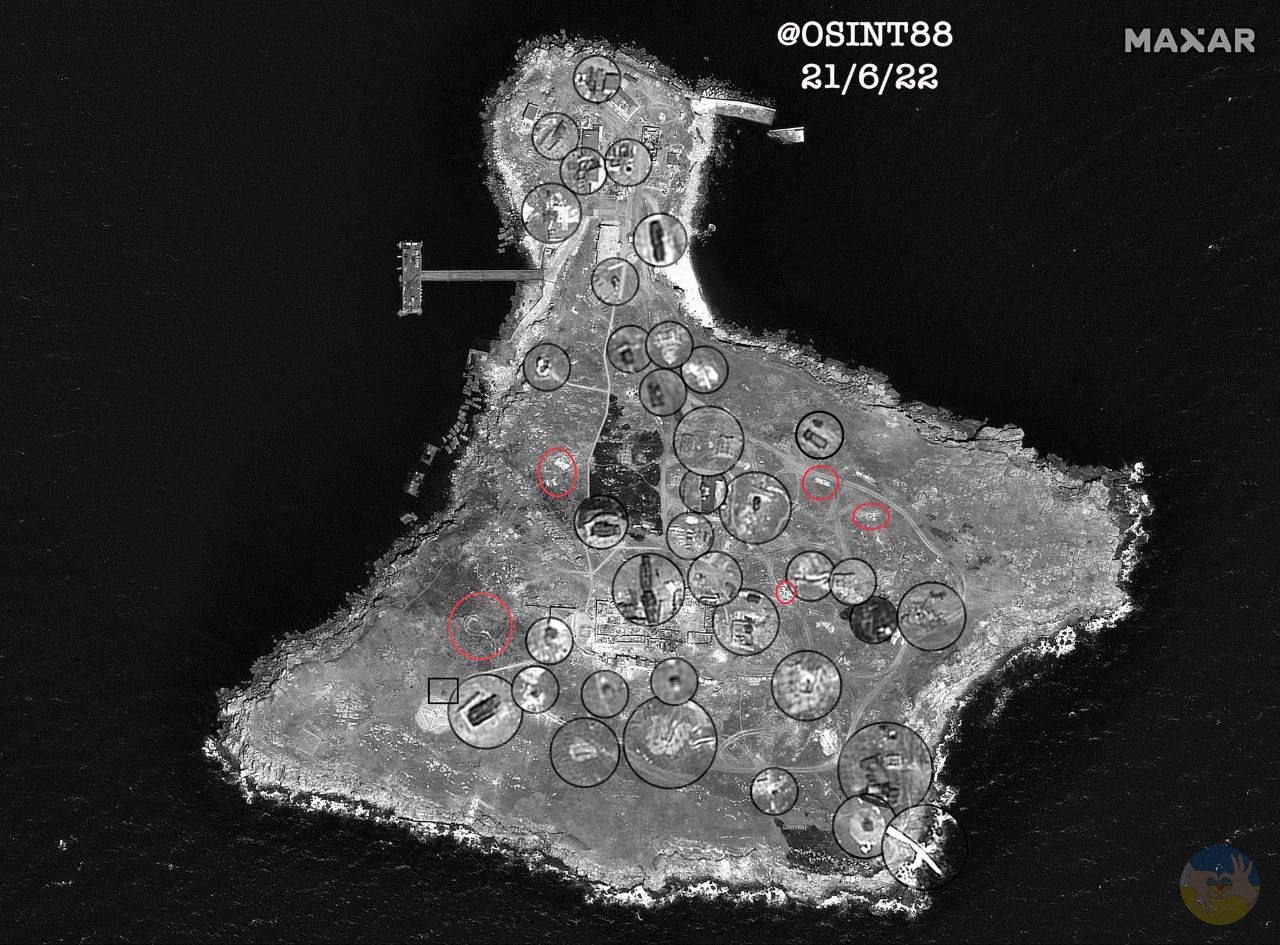 Of the 20 targets, only 5 remain.
@OSINT88
Nikolai Izotov, who lives there, says he heard more than a dozen loud thuds coming from the direction of the rock at 4.30am.
“We’re used to sleepless nights, but this was something new,” he said.
Natalya Gumenyuk, a spokesman for Ukraine’s Southern Command, confirmed an “ongoing operation” on the island, but would not be drawn on the details.
In the days since, Ukraine has stepped up attacks, hitting the rock with new, long-range artillery.
The Russians’ fierce response, targeting Odessa with dozens of long-range missiles, suggests they are not happy. 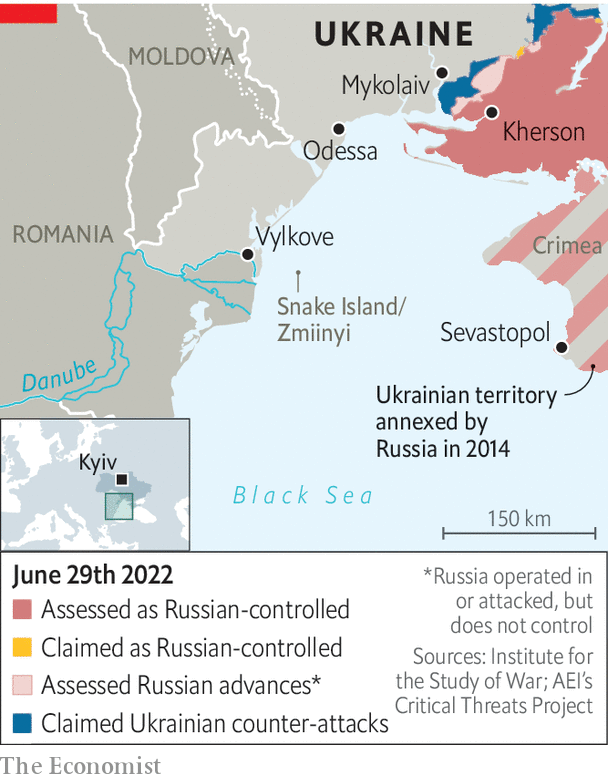 Snake Island, which is known in Ukrainian as Zmiinyi, is only 45km from Romania, a member of NATO.
Its location overlooking the Danube delta and shipping channels to Odessa and other Black Sea ports make it a strategic prize.
It could also serve as a bridgehead for an amphibious attack on Odessa, some 140km away. 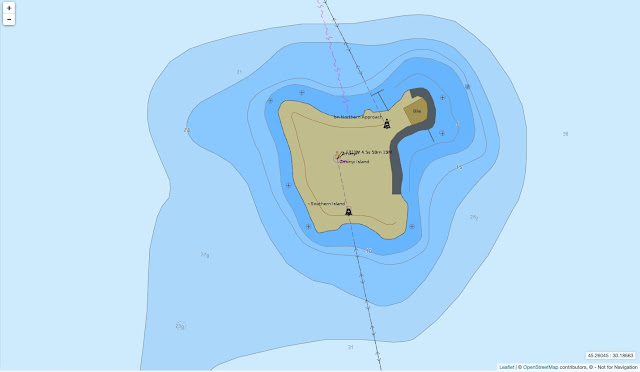 ENC UA4CC871 for Snake Island
Russia has already set up a reconnaissance station with a group of marine commandos from the 388th division, says Andrii Ryzhenko, a former Ukrainian navy captain now at the Centre for Strategies, a think-tank in Kyiv.
The unit’s main task is gathering intelligence and conducting subversion, he says, “but they haven’t cancelled plans for a landing.”

The shoreline around Vylkove has been long mooted as a potential first stop for any amphibious attack on Odessa.
The Ukrainian army this week closed off access to several islands surrounding the town, for reasons it did not disclose.
The islands had been a source of subsistence for some of the increasingly impoverished locals; they would head there to pick apples, figs, grapes and berries.
The ban has added to a tense mood in the city.
“We see these huge ships and imagine the horrors of a thousand Russian soldiers landing on our shore,” says Mr Izotov.
He jokes that he is personally worried since he has a cellar full of homemade wine and moonshine.
“You know what drunks they are.”

Ukraine has launched several daring raids on the Russian-occupied island since the sinking of the Moskva.
The most audacious came in May, when the Ukrainians used a combination of fighter jets and Bayraktar drones to destroy landing ships and a helicopter.
There was then a long pause, until June 17th, when reports came of the apparent sinking of a Russian supply ship and rescue tug, the Vasily Bekh.
Local media said the vessel was hit by two Western anti-ship missiles, and was in the middle of unloading a Tor air defence system that was unable or had not been set up to protect against the attack.
Unconfirmed reports suggest as many as 33 men were on board. 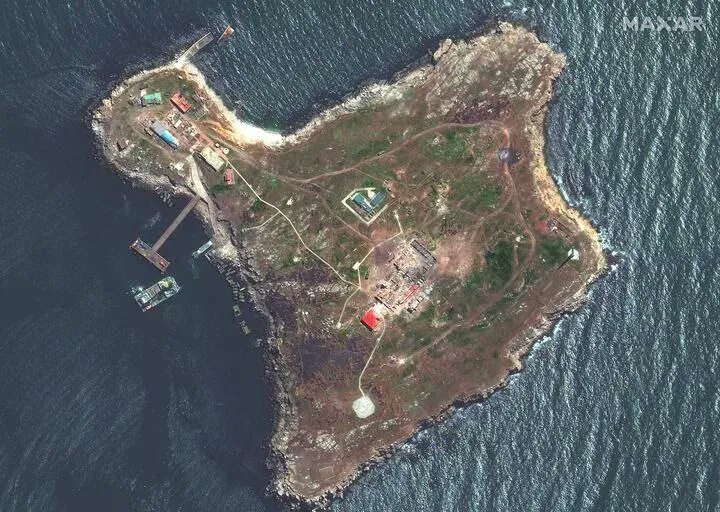 Satellite imagery suggests Russia still retains a strong presence on the island.
Brian Ramsey, the pseudonym of a former British army officer who has been monitoring such images and other intelligence, says Russian boats have been supplying the island at least once a week, typically at night.
“The trips are usually done on Wednesdays and Thursdays, depending on the vessel needed to move the equipment,” he says.
A satellite photograph dated June 14th shows new trench systems, fortifications, camouflage netting, fuel storage, military vehicles, radar and a dozen short-range air defence systems.
More recent footage shows significant damage in at least three places.

As in other theatres of the war, the battle for Snake Island could boil down to logistics: which side is able to get the right equipment to the right place first.
Russia had been in a stronger position for most of the war.
But Ukraine is beginning to take delivery of some advanced Western artillery systems and long-range rockets.
These are mobile, precise and have a long enough range to strike the island from the mainland.
They allow Ukraine to attack without risking its remaining fighter jets, as it did on June 20th.
The first attack using such weapons took place on the night of June 26th.
Ukraine claims to have destroyed a Russian air-defence system, although cloudy conditions have made it hard to assess the damage.

Ukraine is in no rush to put its forces back on the rock; it simply hopes to make it impossible for Russia to make any use of the island.
“With their superiority in the air and with the ships of the Black Sea, it is easier for them to kill us on Snake Island than it is for us to kill them,” says Mr Ryzhenko, the former Ukrainian captain.
But that, he adds, is why forcing Russians off the island will only be the beginning of a long story.
“We need to be sinking their ships if we are to stand a chance.”