Where to draw the line in the Eastern Mediterranean 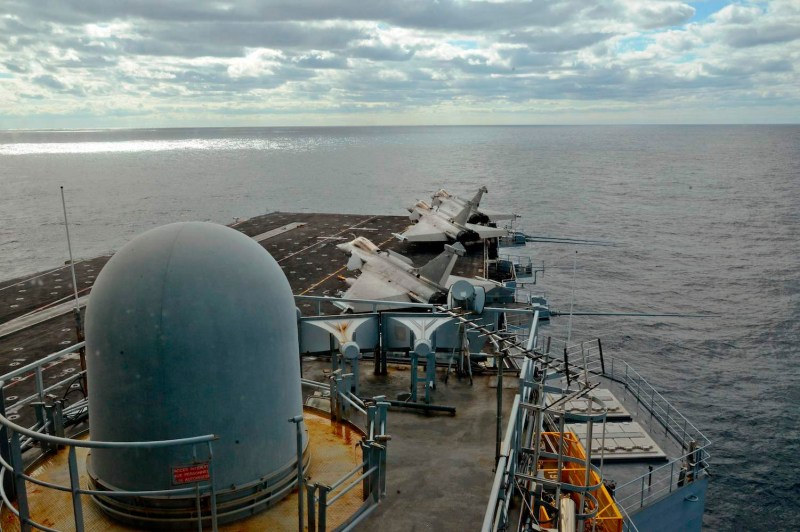 The deck of a French aircraft carrier sails off the eastern coast of Cyprus on Feb.
10, 2020.
Mario Goldman / AFP/ Getty images
From ForeignPolicy by Michaël Tanchum
As France sends aircraft carriers to the region, all sides should look to Bangladesh and Myanmar for a solution to the border dispute.

Turkey and Greece’s escalating Eastern Mediterranean conflict, based on an old maritime boundary dispute, is becoming a geopolitical nightmare for NATO and the European Union.
On Feb. 21, France sent its nuclear aircraft carrier to operate for several months in the Eastern Mediterranean as a show of force in support of Greece.
Athens, disappointed with many of its other EU partners’ conciliatory approach to Turkey, has mobilized an unprecedented level of military support from Egypt, Israel, Saudi Arabia, and the United Arab Emirates.
A defiant Turkey, which maintains 30,000 troops in the northern part of ethnically divided Cyprus, now insists the EU member nation be partitioned to create an independent Turkic state.

The conflict is tearing at the fabric of Europe and eroding NATO solidarity.
Brussels and Washington need to draw the line with Ankara and Athens on their maritime boundary dispute before it is too late.
But where? 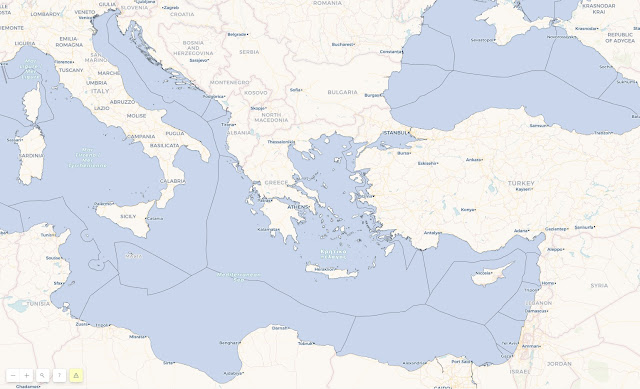 Greece-Turkey EEZ with the GeoGarage platform
At issue for Turkey is the EU-recognized Seville map’s maritime boundaries of the Eastern Mediterranean.
Named after an EU-commissioned map study by the University of Seville, it drew maximal boundaries for Greece and Cyprus at Turkey’s expense by using the coast of every inhabited Greek island no matter how small and no matter how close to the Turkish coastline.
Particularly contentious was the Seville map’s use of Kastellorizo, a very small island just one mile from the Turkish coast, in defining the Greece-Turkey maritime boundary.

The Seville map followed the United Nations Convention on the Law of the Sea’s (UNCLOS) Article 121, which maintains that the coastline of an island that can “sustain human habitation or economic life” generates a continental shelf and an exclusive economic zone (EEZ), the same as any coastal land formation.
Yet at the same time, UNCLOS also provides for a principle of equity, and the international case law based on it creates the possibility of setting aside Article 121 when its application creates an unjustifiable encroachment on the maritime zone of a mainland coast.
Ankara has never explored this avenue for adjusting the Seville map since it is not a signatory to the convention.

Turkey instead found an international partner with which to draw its own map.
In 2019, Ankara signed a maritime agreement with war-torn Libya’s Tripoli-based government, which created a map that defines a maximal maritime zone for Turkey by denying any of Greece’s islands a continental shelf or an EEZ.
The agreement demarcates just an 18.6-nautical-mile segment of the maritime boundary between Turkey and Libya.
However, projecting out from that strip, the Ankara-Tripoli map divides the entire maritime zone exclusively between Turkey and Libya.
Turkey’s map would be invalid under any circumstance since the 3,219-square-mile Greek island of Crete in the middle of that maritime zone would unquestionably generate an EEZ for Greece.

The impasse over these two maps has turned the Eastern Mediterranean into the eye of a geopolitical storm.
Ankara and Athens both need to step back from their maximal demands.
If they do, progress on the maritime boundary dispute could jump-start the stalled negotiations on a Cyprus reunification plan.
If they don’t, the escalating crisis could engulf the region.

To understand how the borders could be drawn, the sides should look to the resolution of an analogous dispute between Bangladesh and Myanmar.

To understand how the borders could be drawn, the sides should look to the resolution of an analogous maritime dispute between the adjacent states of Bangladesh and Myanmar.
Although the Bay of Bengal may seem rather remote from the Eastern Mediterranean, both maritime regions are rich in offshore natural gas resources with similarly high geopolitical stakes.

The island of Kastellorizo, whose maritime jurisdiction is at the heart of the Turkey-Greece boundary dispute, has a very close analogue in the Bay of Bengal’s Saint Martin’s Island.
The 14-square-mile dot is home to 4,000 inhabitants and is Bangladesh’s southernmost point.
A tourist hotspot on account of its coral reef and beaches, the island also happens to lie five miles off Myanmar’s coast. 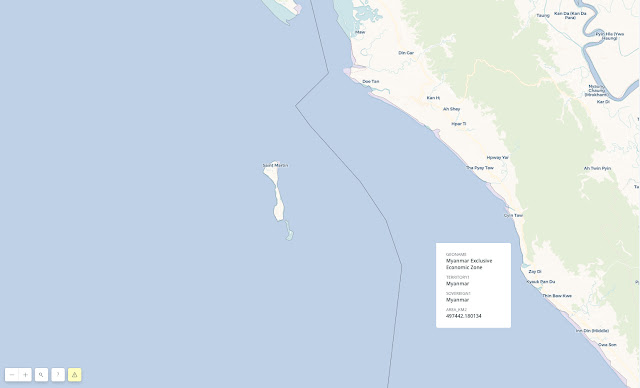 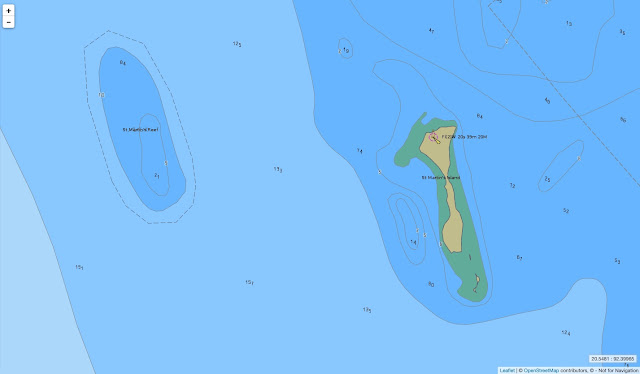 Saint Martin island with EEZ limitation and ENC viewing (BD307425) with the GeoGarage platform
As a piece of Bangladeshi territory located so close to Myanmar’s coast, Saint Martin’s Island exerted outsized influence on the maritime boundary line and severely boxed in Myanmar. 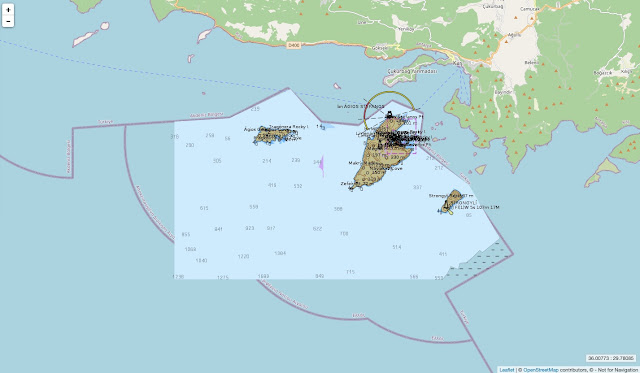 ENC TR300321
Greece’s Kastellorizo is smaller than St. Martin’s and is located even closer to Turkey’s coast.
Popularized among tourists by the 1991 film Mediterraneo, the 3.6-square-mile island is home to no more than 500 people.
But the island has also been used to define the maritime boundary close to Turkey’s shores.

Unlike the Eastern Mediterranean antagonists, Bangladesh and Myanmar brought their dispute before the International Tribunal for the Law of the Sea.
Rendering its judgment in March 2012, the tribunal rejected Myanmar’s argument, which used a similar logic to Turkey’s map.
The tribunal held that Saint Martin’s Island was a proper inhabited island that could sustain economic life.
Meeting the UNCLOS Article 121 standard, the island would generate a continental shelf and EEZ and should be included in the calculations of Bangladesh’s borders.
But that was not the end of the tribunal’s decision.

Taking a page from Beijing, Rome is positioning itself as the center of trade, energy, and transportation in Southern Europe and beyond. 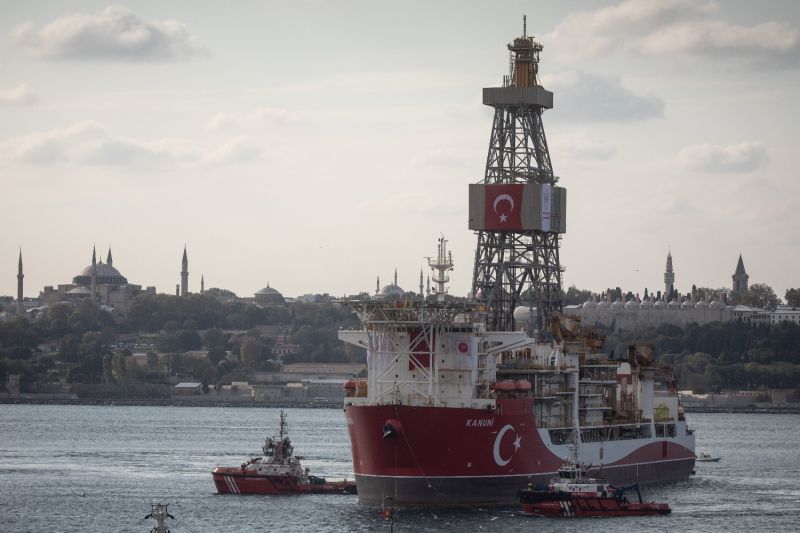 Turkey’s adventures abroad are about more than hydrocarbons.
They’re a bold and expensive attempt at geopolitical revisionism.

On its own, Saint Martin’s Island would generate a 5,019-square-mile maritime area for Bangladesh at Myanmar’s expense.
Given that such a space “would cause an unwarranted distortion” in the seaward projection from Myanmar’s coast, the tribunal appealed to the principle of equity and ultimately decided that the island should have no effect on drawing the delimitation of the continental shelf or EEZ.

The ruling in the Bangladesh-Myanmar case points to an equitable endgame for Greece and Turkey.
Following the Bay of Bengal precedent, Kastellorizo would not be used in drawing the lines.
At the same time, UNCLOS’s Article 121 would still apply to Greece’s larger islands in the region.
The judgement showed that Article 121 could be set aside for reasons of equity but still upheld as a general approach to other islands.Although neither the United States nor the EU can draw a line in the Eastern Mediterranean and impose a solution on Turkey and Greece, the spiraling tensions between Ankara and Athens have become intolerable for the functioning of NATO and the European Union.
Following the late August 2020 clash between Turkish and Greek warships in the vicinity of Kastellorizo, the European Council, the EU’s supreme decision-making body, decided on two successive three-month cooling off periods to allow a NATO-brokered, de-escalation process to proceed.
But no clear direction for resolving the maritime dispute has emerged.

Following the Bay of Bengal case, Washington and Brussels can insist that negotiations between Turkey and Greece either include some formal adjudication acceptable to both sides or simply that negotiations take as their starting point the likely outcome of such adjudication.
Third parties competent in maritime law and perceived as even-handed by both the Turkish and Greek sides could facilitate the process.
Such an effort, rooted in legal principle and sufficiently flexible to accommodate and incentivize realpolitik, is where the United States and the EU should draw their line.
Links :
Posted by geogarage at 1:24 AM