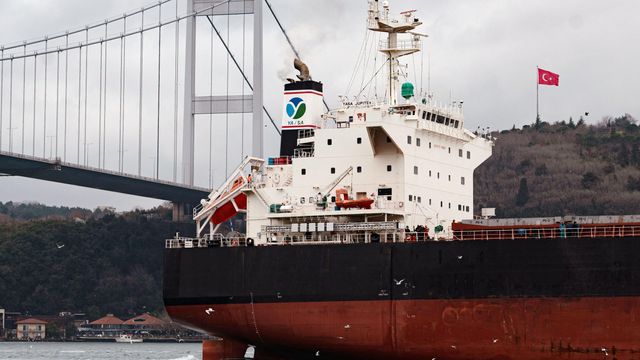 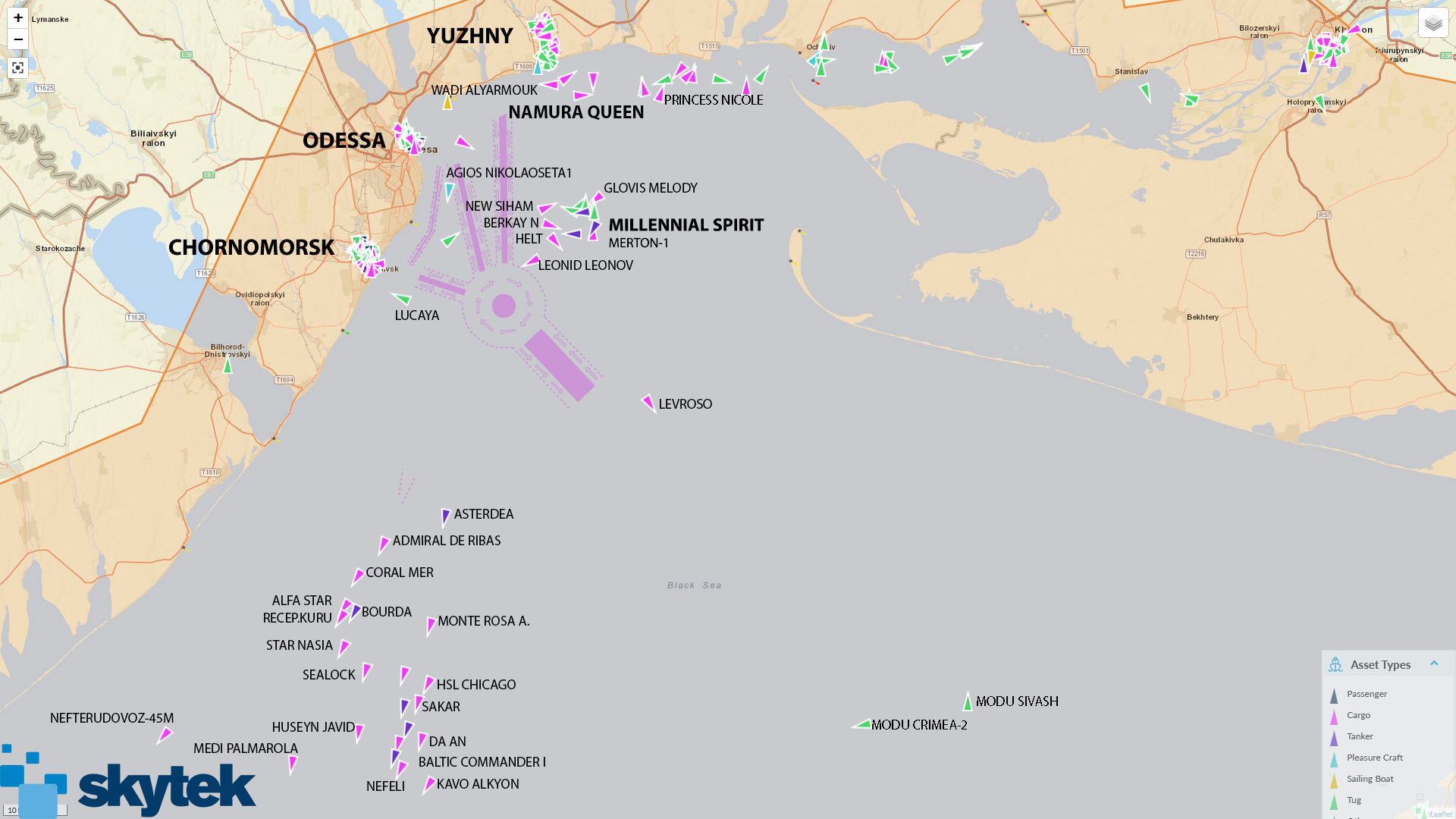 Damage to the two cargo ships — each of them valued at close to $30 million, according to sanctions compliance assessment software vendor Skytek — was minor, though one crew member on the Namura Queen sustained non-life-threatening injuries.
When they were struck, the ships were among 120 cargo vessels moored at Ukrainian ports, just before Ukraine's military suspended commercial shipping at its ports following the initial invasion by Russian forces into that country. 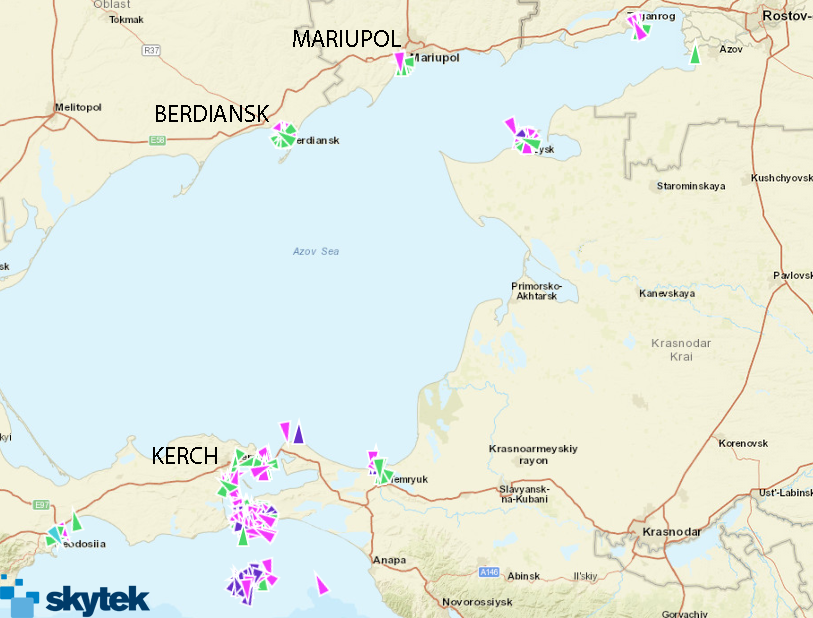 On 24 February, there were 120 ships moored under cargo operations in Ukrainian ports, with another 60 cargo ships waiting at anchor.
The Russian invasion into Ukraine saw vessels in anchorage being immediately instructed to leave the escalated risk area.
On the morning of February 24th, the first 24 ships departed anchorage displaying destinations as: “Open Sea” and “For Orders”.
Vessels moored in Ukrainian port have remained alongside due to the suspension of operations in all Ukrainian sea ports.
On 24 February 2022, Russia suspended ship movements in the Azov Sea until further notice, following its move to launch military operations in the Donbas region of the Ukraine.
The data is just a sampling of the sort of information available through software from Skytek, which uses machine learning and data analytics to evaluate current and historical voyage patterns and alert customers when suspicious activities such as evasion tactics occur in sanctioned maritime zones.
When President Joe Biden announced a new round of sanctions targeting 400 people and entities affiliated with the Russian government during a Thursday press conference, a reporter asked if he believed the actions would have an impact on making Russia change course in Ukraine.
A frustrated Biden responded, “You’re playing a game with me.”
Just before, he remarked, “I did not say that, in fact, the sanctions would deter [Russian President Vladimir Putin]. Sanctions never deter.”
Whether or not they are directly deterring Putin from continuing Russia’s attacks on Ukraine, data from Windward — another company providing AI-based analytics software to assess maritime risk — showed that regulatory or “moral” sanctions appear to be having some effect.
“The Western market has been shutting off completely any work with anybody related to Russia,” said Ami Daniel, co-founder and CEO of Windward. That means that when it comes to companies or ships that are connected in some way to Russia, “A lot of the people won't even touch you with a stick right now.”
Right now, Windward’s customers are conducting queries in its software platform to help inform how they address sanctions against Russian entities.
“We have a German customer which is super risk averse and doesn't want to do any business with anybody who's ever been near one of these places in the last 24 months,” Daniel said.
Lloyd’s List Intelligence also offers data and AI-based analytics tools to monitor maritime risk.
But unlike startup competitors, the company launched in 1734 as a printed broadsheet posting ship arrivals and departures in a London coffee house.
It still maintains its media arm, which reported early this month that “Cargo underwriters are taking the decision not to cover consignments heading to Russia or Ukraine, and even nearby countries, citing reputational risks and the potential difficulties of paying out on insured claims.

Russian ships go home for fuel
Windward’s software provides custom views of exposure to vessels connected to countries customers have particular concern about, such as Russia, Venezuela, Iran or Myanmar, over a selected time period.
The company feeds satellite image and radio frequency data, weather data, ship ownership and cargo data, port data and vessel schedule data into deep-learning models tailored to a customer’s risk tolerance, then scores their level of risk associated with sanctions or other laws and regulations.
As an example, the system pulls in imagery data from hundreds of satellites measuring a particular offshore area via an API every day.
Windward has published reports in recent weeks with updates related specifically to Ukraine and the Black Sea region, where intensifying attacks from Russia have led to a drastic decline in port activity around Ukraine.
But not all cargo ship activity is at a standstill. In fact, based on its analysis of its ship-tracking in the region, Windward reported on March 22 that general cargo and oil tankers calling port in Russia actually increased operations by 44% over the following week.
The company pointed out an important piece of information teased out in its analysis: 60% of that increase in Russian port calls was associated with Russian-flagged vessels.
That, Daniel said, likely meant that those ships were returning home before they got stranded.
“This is Russian vessels coming home, and we think it's also because nobody would sell them marine fuel,” he said, adding, “About 50% of the marine fuel providers of bunker fuel will not provide them fuel. So they're in a tough spot.”
Flag-hopping and oligarch shell games
Tracking sanctions-related risk on the high seas is just one area companies need to monitor, of course. Financial institutions are also using sophisticated analytics and machine-learning-based software to keep one step ahead of Russian nationals and oligarchs recently added to the U.S. Treasury Department’s sanctions list.
Entity resolution is a key component in the processes used to identify suspicious actors by companies including Windward and Quantexa, which uses network analytics to detect possible financial fraud such as money laundering.
The Quantexa system automatically generates a contextual network, a graph indicating the links connecting target entities with other shell operations or shady individuals.
To isolate possible fraudsters, the financial fraud detection software ingests information from an array of sources, from SWIFT wire transfer messages and risk data from Bureau van Dijk’s Orbis and RDC Grid to less-obvious sources such as financial records data revealed through journalistic investigations of the leaked Pandora and Panama Papers.
“When you go in and look at the exposure, you see that person is not only a sanctioned individual, here's the company that our customers have been doing business with [and] he's 100% owner of that company,” said Clark Frogley, head of financial crime solutions at Quantexa.
He continued, “But guess what? He's also the primary shareholder of these other three companies that they've been doing business with or these other two customers that we weren't even looking at.”

There are +2000 Russian vessels out of 45K merchant vessels sailing the oceans.
As Western countries refuse to work with and provide bunkering services to them, they will soon go out of service.
Without these 5%, shipping prices will break new records in the upcoming weeks.
@WindwardAI
On the water, Windward must navigate the maritime version of oligarch shell games to resolve ship identity.
According to Windward, vessels are usually associated with multiple nationalities because they are linked to several owners, each performing different functions on a single ship.
Windward combines several sources of positional and vessel identifier data to detect flag-hopping, a manipulative tactic used to circumvent sanctions and fishing regulations by changing the nation where a ship is registered.
Shipping traders or legal teams at Windward’s customer companies are using its analysis to inform whether they should cancel booked shipments or other deals that might be subject to Russia-related sanctions.
Contracts associated with trading plans over the next six months or more could be canceled if deemed too risky, Daniel said, adding, “Listen, force majeure. Tough luck.”
Links :
Posted by geogarage at 1:08 AM