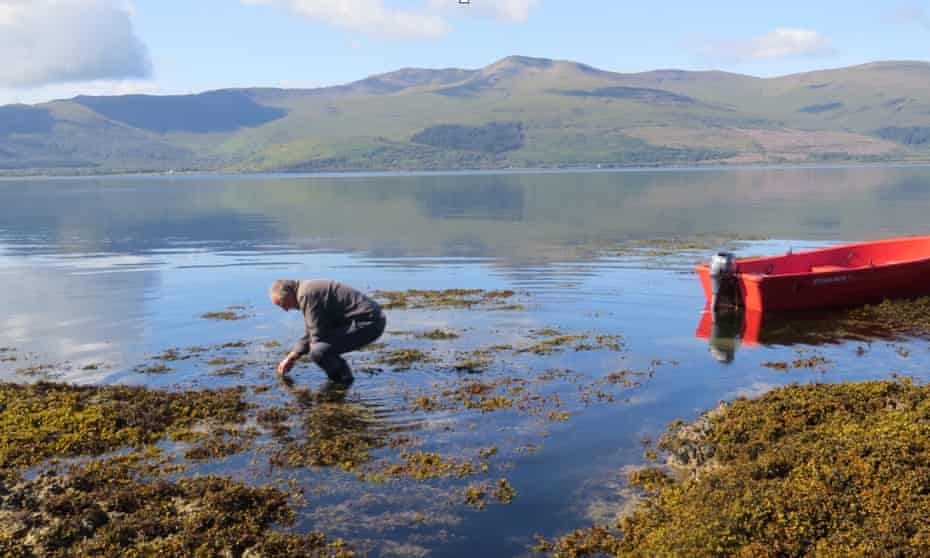 There’s a WTF moment about a third of the way through Adam Nicolson’s new book, The Sea Is Not Made of Water.
The first chapters largely follow in the footsteps of his last book of nature writing, The Seabird’s Cry, applying the same characteristic form of lyrical scientific investigation into the creatures of the rock pool that he’d deployed on the birds of the cliffs and wide oceans.
The opening section of this book is called Animals and we leap from sand hopper to winkle to prawn, understanding the complex interconnectedness of these underexamined lives, learning a new and perspective-altering fact on every page.
Then, all of a sudden, there’s a chapter on the pre-Socratic philosopher Heraclitus.

It’s a segment of exquisite beauty, a bravura act of writing that seems not only to provide a model for the rest of this book, but changes the way you understand the whole dizzying Nicolson oeuvre.
This is a writer who has moved from memoir to literary criticism to nature writing via The Mighty Dead, one of the best books on Homer ever written.
In his chapter on Heraclitus, Nicolson reads a rock pool through the work of the great philosopher, bringing to the crucible of tidal life “a systemic understanding whose wholeness relies on its union of opposites”.
We begin to understand that the thread that links Nicolson’s books is precisely this – a philosopher’s wish to provide a way of comprehending the place of the individual in a vast and shifting world, the quest for a good life, the search for new answers to old questions.
The chapter on prawns makes us consider whether invertebrates have a consciousness, a right to dignity in life and death

The Sea Is Not Made of Water takes the reader on several journeys.
First, there is the contemporary story of Nicolson, in his 60s, deciding to dig rock pools on the shore near his wife’s family home in Argyllshire.
Nicolson writes off for official permission for his project and is slightly wounded to receive a response saying that he ought not to have bothered, as “they do not appear to be any different to anything built by local children during the holidays”.
Undeterred, Nicolson seizes his pickaxe and waterproof cement and sets to work.
The first pool fails – it is too far out of the water – but the next ones don’t, and are soon full of scintillating life.

With life comes drama.
There’s the slow-motion battle between two anemones – red foot and blue foot; there’s the self-sacrifice of young winkles so that their elders can escape (“the winkles speeded up from about an eighth of an inch a minute to about half an inch a minute, running for the hills”); there’s the remarkably tender, week-long lovemaking of green crabs.
The chapter on prawns is one of the best, doing for the cockroaches of the sea what David Foster Wallace did for their big brothers in his wonderful essay Consider the Lobster, making us consider whether invertebrates have a consciousness, a sense of self, a right to dignity in life and death.

The real journey of The Sea Is Not Made of Water occurs in its second and third parts, though.
We come to recognise that the chapters on rock pools have only been a rehearsal, a study for what is to come.
From the Lilliputian intimacy of the rock pool we spool out to chapters on the tides and the formation of rocks – vast in space and time, vertiginous in their scope and ambition.
The last part of the book provides a history of the humans who inhabited this wild and rocky Scottish shore from pre-history to the present, with Nicolson applying the same sympathetic scientific curiosity to these lives that he gave to the winkles.
“Life is tidal, full of loss and arrival, a thing that makes and ebbs,” he writes at one point, and this is what we take away from the book – that we are all in rock pools, knitted within complex systems. We are part of nature, not separate from it.

Here’s an idea: the best books are never only, or even mainly, about the subject they claim to be about. The novelist John Barth said something like this when asked what kept people turning pages.
“The question ‘Who am I?’ is what ultimately motivates the reader,” he said.
The greatest literature – and this unique and terribly moving title is great literature indeed – reaches beyond itself to speak to us of the most profound and essential things.
Spending time in Nicolson’s rock pool will change your life and the way you view the lives of others.

The Sea Is Not Made of Water: Life Between the Tides by Adam Nicolson is published by William Collins (£20).
Posted by geogarage at 1:25 AM