This intrepid robot is the Wall-E of the deep sea 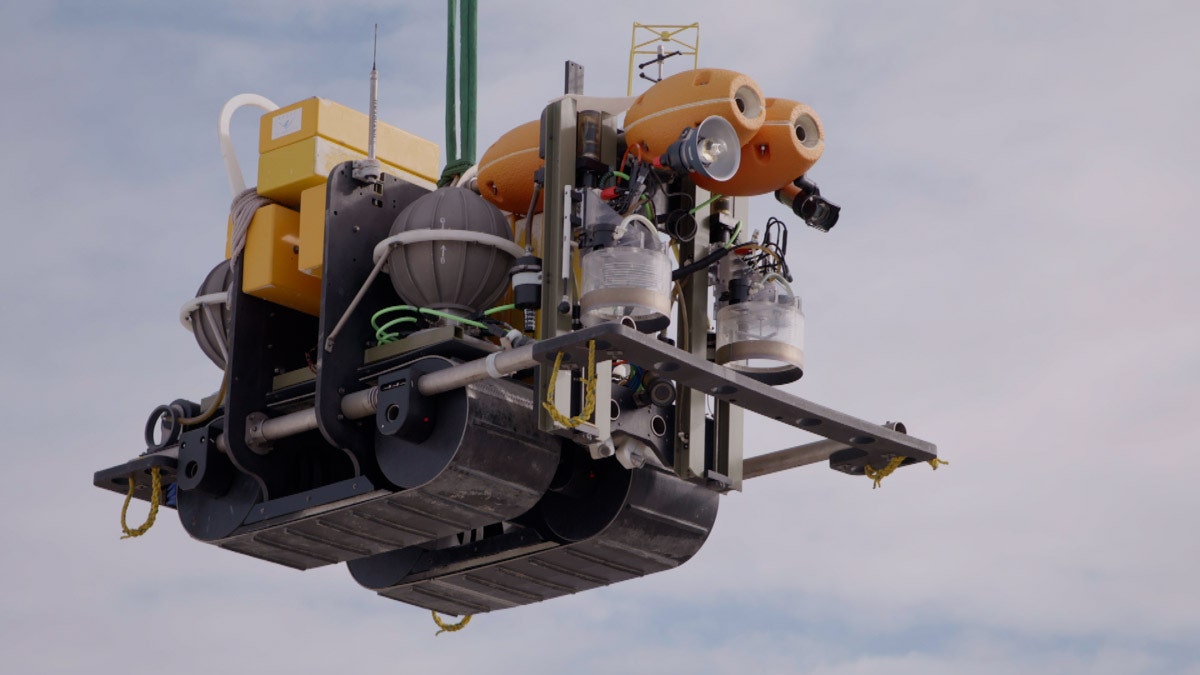 With extra-wide tracks and a bunch of other clever features, the Benthic Rover II can roam the seafloor for years at a time.
From Wired by Matt Simon

Here's how engineers got the car-sized Benthic Rover II to roam the seafloor 13,000 feet deep without immediately breaking down.

THE BENTHIC ROVER II is the size of a compact car, although it rocks fat treads, making it more like a scientific tank.
That, along with the two googly-eye-like flotation devices on its front, gives it a sort of WALL-E vibe.
Only instead of exploring a garbage-strewn landscape, BR-II roams the Pacific seafloor, 13,000 feet deep.
The robot’s mission: To prowl the squishy terrain in search of clues about how the deep ocean processes carbon.

That mission begins with a wild ride, 180 miles off the coast of Southern California.
Scientists at the Monterey Bay Aquarium Research Institute lower BR-II into the water and then … drop it.
Completely untethered, the robot free-falls for two and a half hours, landing on the abyssal plains—great stretches of what you might generously call muck.
“It's mushy and dusty at the same time,” says MBARI electrical engineer Alana Sherman, coauthor on a new paper in Science Robotics describing findings from the robot’s adventures.
“Which is part of the reason it’s a tracked vehicle, and it has these really wide treads.” That extra surface area distributes the robot’s weight so it doesn’t sink into the sand.

If you wanted to devise the perfect way to torture a robot, the deep sea would be it.
At these depths the water is cold, salty (and therefore corrosive), and highly pressurized; there’s a whole lot of liquid pushing down on the robot.

Like the Mars rovers, this robot must be autonomous.
In fact, in some ways it’s even more difficult to keep tabs on a rover 13,000 deep than it is a rover on another planet.
Radio waves travel well in space, it’s just that they take up to 20 minutes each way to make the trip between Earth and Mars—and good luck remotely piloting a rover in real time with that kind of delay.
But radio waves hate water.
So, instead, BR-II uses acoustic signals to talk to another robot, a floating glider that MBARI scientists release from shore four times a year.
The glider, essentially a very expensive surfboard, travels to the rover’s approximate location, pings it, collects status updates and sample data, and fires that information to a satellite for the researchers to access.

Notice the simplistic muckiness of the seafloor.
PHOTOGRAPH: © 2021 MBARI
Since MBARI scientists can’t just sit in their labs and pilot the rover, it’s on its own.
But its directives are simple.
Parked on the seafloor, it lowers two oxygen sensors into the muck.
This gives the robot a measure of the biological activity in the sediment, as microbes consume oxygen and spit out carbon dioxide.
The rover also has a fluorescence camera system that casts a blue light, which makes the chlorophyll in organic matter glow.
This gives the robot an idea of how much detritus from surface waters, known as “marine snow,” is making its way down to the seafloor.

The rover sits in one place like this for 48 hours, then moves forward 33 feet.
That’s all.
“It would not know if it drove off a cliff—all it knows is I'm supposed to drive forward 10 meters,” says Sherman.
“But luckily, there are no cliffs around, so we take advantage of the simplicity of the environment to keep the robot more simple.”

Still, there’s a problem: The oversized treads make a mess of the seafloor.
“Even though it is moving very slowly, it doesn't take much to create this huge dust storm,” says Sherman.
“We always want to be driving into the current, so that it can push the sediment that is disturbed behind us.” So before the rover moves, it uses a sensor to get an idea of the current direction of the … er, current, then heads straight for it.

You can see the two oxygen samplers beneath the eyeball floats.
PHOTOGRAPH: © 2016 MBARI
The benthic rover does this for a whole year, unsupervised: park, take measurements, move 33 feet, repeat.
Then the scientists steam out in their research boat to give it a battery change.

At the back of the robot are two titanium spheres—each somewhere between the size of a yoga ball and a beach ball—filled with batteries that power a year of continuous operation.
When it’s time to resupply power, the scientists retrieve BR-11 by sending it a signal that releases a 250-pound weight attached to the robot’s belly.
Once the weight is dropped, those flotation devices that look like eyes begin to do their work.
They are actually “syntactic” foam: Instead of being mushy, porous plastic filled with air, they are actually made of hard material and filled with small glass spheres, each containing air.
Under pressures that would collapse typical foam in on itself, the syntactic foam stays buoyant, and propels the robot to the surface.

The scientists haul the rover up on board their boat, download BRI-II’s data, swap out its batteries, and check it for problems.
If everything’s good, they release it to spend another year roaming the abyssal plains.
The last time the scientists went out, though, they discovered that one of BR-II’s motors had failed, so they had to bring it ashore for repairs.
That ended an incredible seven years of continuous operation, which they recapped in their current paper. 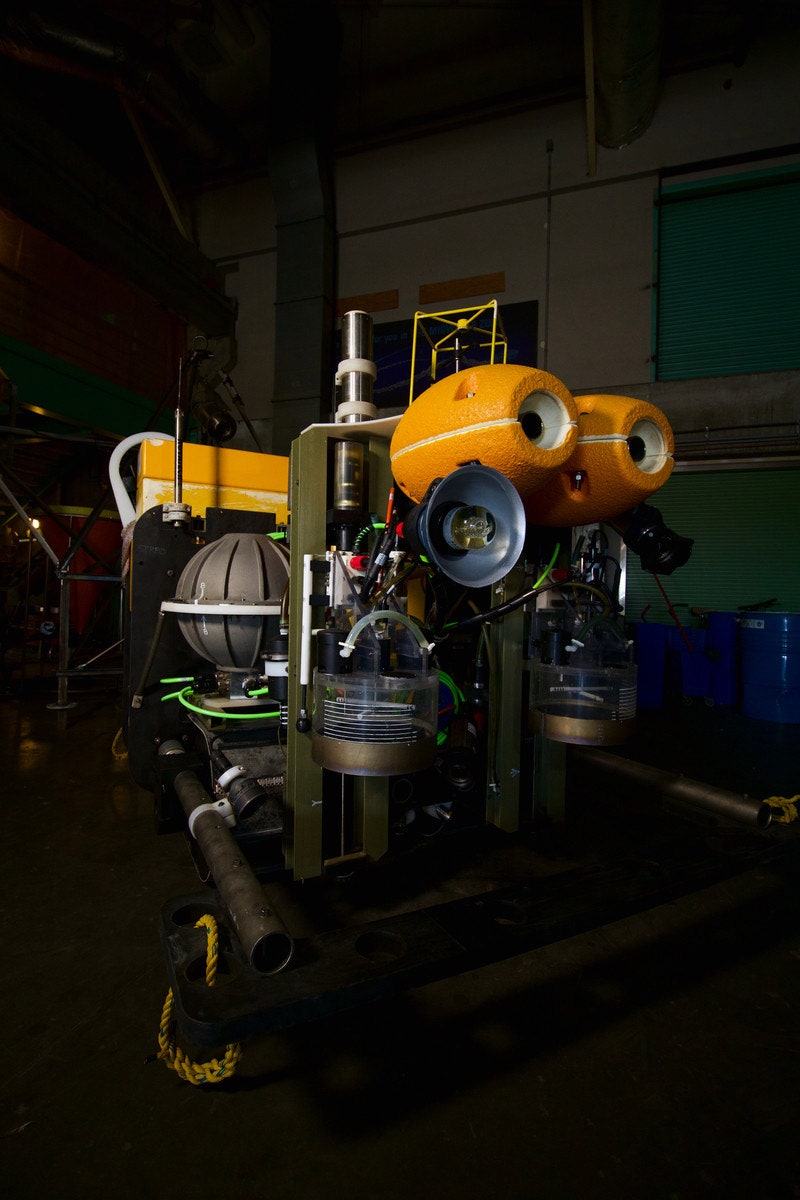 This long observation period has given MBARI scientists unprecedented insight into the goings-on of the deep, across both wide stretches of the seafloor and across long timescales.
That will be critical to understanding our planet’s carbon cycle.
At the ocean’s surface, a galaxy of algae known as phytoplankton sequesters carbon, the way plants do on land.
Then the algae get eaten by tiny animals known as zooplankton.
When these creatures poop, the carbon-rich pellets descend through the water column as marine snow.
Some of the waste gets eaten, either along the way or by bottom-dwelling creatures, but the rest becomes sequestered in the sediment, locking the carbon far away from Earth’s atmosphere.

Yet just how much carbon gets trapped can vary from ocean to ocean and from season to season.
In general, researchers just don’t have a good handle on the biological and chemical processes going on down there.
“The rover helps us understand how much of that carbon might actually make its way into the sediments in the deep sea,” says MBARI marine biologist Crissy Huffard, who coauthored the new paper.
“It's our only view into how much carbon might actually get stored into the sediments, versus how much actually is consumed and probably contributing to acidification in the deep sea.” (When carbon dioxide dissolves in seawater, it forms carbonic acid.)

Here’s a tricky example of one of those seafloor carbon mysteries.
In California, the land is heating up much faster than the adjacent ocean, a differential that intensifies seasonal winds.
That could be driving more upwelling—wind pushes the surface water away, and water from below rushes up to fill the void.
This would bring up more nutrients that feed phytoplankton, which bloom in surface waters, and then die and become marine snow.
Between the years 2015 and 2020, for instance, BR-II’s fluorescence camera detected a massive increase in the amount of phytoplankton reaching the seafloor in big pulses.
Simultaneously, its sensors detected a decrease in oxygen, meaning the microbes in the seafloor were busy processing the bonanza of organic material.

That raises some questions for Huffard.
“Just in general, the area's becoming a lot more erratic in its food supply—it can be years’ worth of food coming down in a few weeks.
So how is that changing the whole ecosystem?” she asks.
"The response by the animal community is almost instant.
They start consuming it right away, there's no big lag.
The microbes are just primed and ready to go.”

What does this mean for the carbon cycle? Theoretically, the more organic material that’s raining down, the more that’s getting sequestered away from the atmosphere.
But at the same time, organisms on the seafloor that are eating this bonus buffet are also using up oxygen and spitting out carbon dioxide, which may be acidifying deeper waters.
And because the ocean is constantly churning, some of that carbon may even make it back up to surface waters and into the atmosphere.
“We’re showing that more and more carbon than would have otherwise been predicted is making its way to the deep sea,” says Huffard.
“The rover adds the dimension to tell us that most of that carbon is actually getting eaten once it's down there, not being stored in the sediment.”

Are these extra-large pulses of marine snow now a permanent feature of the deep waters off California, or an aberration? With the benthic rover, scientists can gather the long-term data required to start providing answers.
“The deep sea is largely understudied and under-appreciated, despite the fact that it is critical to keeping the planet healthy and combating climate change,” says Lisa Levin, who studies the seafloor at the Scripps Institution of Oceanography but wasn’t involved in this work.
“An army of such devices could help us better understand biogeochemical changes—critical to improving climate models, ecosystem models, fisheries models, and more.” Rovers might also help scientists study the effects of deep-sea mining operations.

For now, Huffard and Sherman will keep BR-II rolling off the coast of California—the first of hopefully many such autonomous bottom-dwelling robots that could roam the depths of the world’s oceans.
They say they’ve been approached by other scientists interested in the system, but so far BR-II is more or less one-of-a-kind, both because it’s expensive and requires a lot of engineering know-how to operate.
(Researchers in Germany have developed a similar oxygen-sampling benthic rover called Tramper, which has been roaming the Arctic since 2016.)

“It's almost like if you were an astronomer and if you have the best telescope in the world, but it could only look at one star,” Huffard says.
“If you had more telescopes out there looking at more stars, you'd be able to see a much more complete picture of the sky.”

“I think we would both love it if more people wanted to build more rovers,” she adds.

Sherman laughs.
“As long as they don't call us to fix them.”
Posted by geogarage at 1:52 AM