These Maldives islanders once saw sharks as the threat. Now they fear the plastic 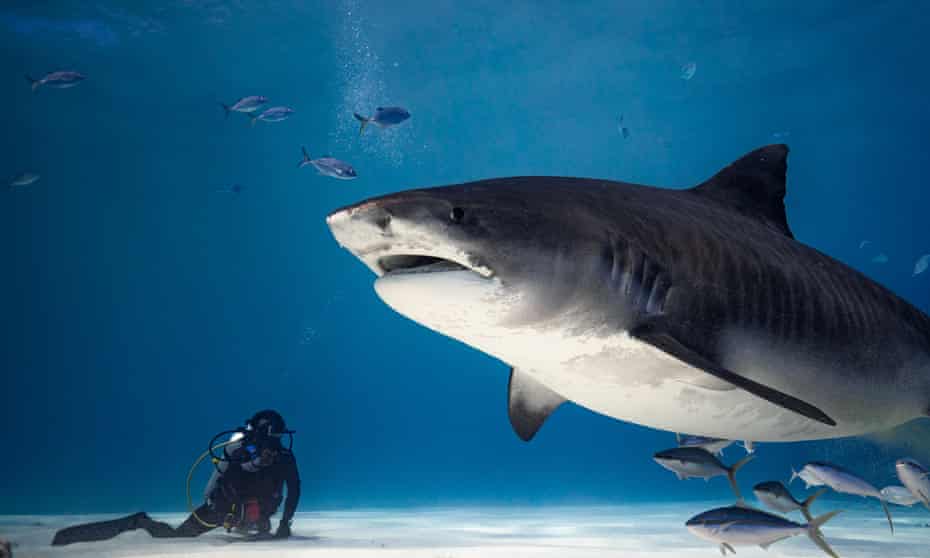 A tiger shark and scuba diver off Fuvahmulah in the Maldives. Scuba diving has boomed recently on the island as sharks came to be seen as an asset rather than a menace.
Photograph: Jono Allen
From The Guardian by Graeme Green
Diving with tiger sharks off Fuvahmulah brought a tourist boom that has led to a destructive tide of plastic waste.
But now locals are pushing back
“People used to think I was crazy,” says Lonu Ahmed. “Even my mum thought I was insane.
Fishermen used to beg me not to dive with sharks.”
Ahmed lives on the island of Fuvahmulah in the Maldives, an island surrounded by tiger sharks.
The islanders have traditionally been terrified of the creatures: fishermen would regularly kill them.
Ten years ago, however, believing the sharks were misunderstood, Ahmed jumped into the water, to the horror of onlookers. He says he saw something they didn’t.
“Everyday, fishermen in the market threw tuna scraps into the harbour,” he recalls. “I noticed the tiger sharks came to eat but never hunted the live fish, only the dead fish. I’ve never been afraid of sharks and knew the shark’s job was to clean the ocean. I wanted to be close to the sharks, to see them face to face.” 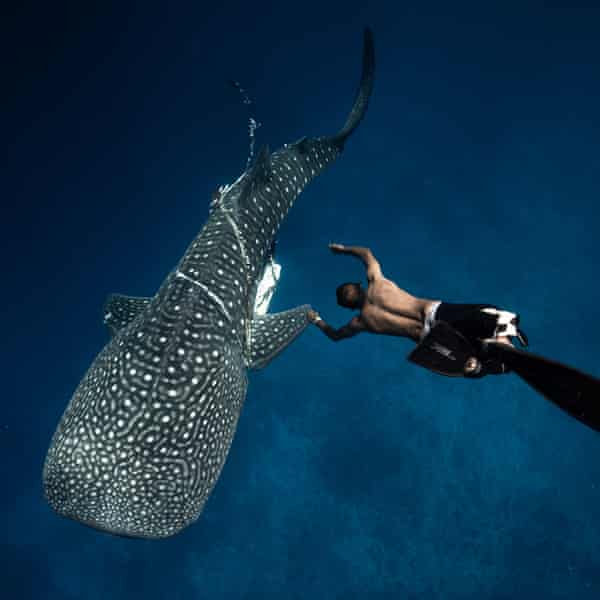 Lonu Ahmed, founder of the Fuvahmulah Marine Foundation, frees a whale shark that had become tightly entrapped by a length of plastic line.
Photograph: Jono Allen
Seeing Ahmed swim with the sharks, always returning unscathed, changed perceptions on the island.
“I told them not to worry, that sharks don’t attack humans,” he says.
“I love sharks. I feel relaxed and calm with sharks.
“Now fishermen know sharks aren’t dangerous. Today, a 12-year-old boy asked me if we can go freediving with the tiger sharks. The young generation especially love sharks. I tell the fishermen not to attack sharks because they keep the fish and tuna populations healthy,” Ahmed says.
“The fishermen are beginning to understand sharks aren’t dangerous.”
His initiative has led to a tourism boom on the island and, after previously doing laundry and housekeeping in resorts, he now takes tourists diving with sharks.
Scuba diving has transformed the economy, creating one of the biggest sources of income for local people.
In 2020, Unesco declared Fuvahmulah a biosphere reserve, though the island lacks an official conservation or protection organisation.
Diving has transformed the lives of the islanders, both commercially and in terms of their relationship to sharks. Until Ahmed took them out to dive with his company, Fuvamulah Tiger Shark Dive, many of them, such as Sand Saeed, were unable to swim.
“I’ve always had a huge fear,” Saeed says.
“But after Lonu took me to see the sharks face to face and see how they move and their behaviour,
I realised the Hollywood movies, like Jaws, were pretty much bullshit. 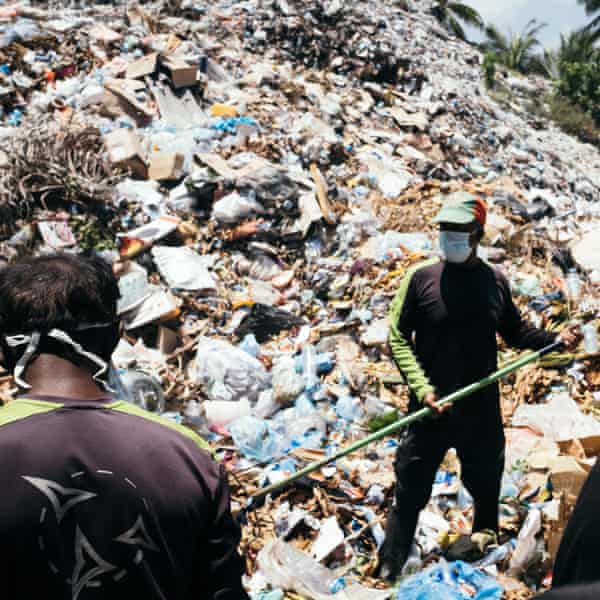 A mountain of rubbish, with vast amounts of plastic, has built up in Fuvahmulah with the tourist boom.
Photograph: Matt Porteous
“He’s had a good impact on the local community. People’s attitude towards sharks is changing.
This island used to fish sharks, but now most people value our sharks more alive than dead.
If Lonu hadn’t started diving here, many local people wouldn’t understand how beautiful the marine life and sharks here are.”
“When we were kids, sharks were something that infested the water,” says Hamna Hussain, a divemaster on Fuvahmulah.
“My friends have real phobias but since diving with sharks, I’m never scared around them. It changed my life.
“If shark diving wasn’t discovered here, life now would be so different. I feel like this is a new era for this island. My goddaughter is two and every time she sees me she tells me she wants to see sharks. That’s a huge difference to when I was a kid.
“I’m the only local female divemaster here, and other locals, particularly men, see me and say: ‘If she can dive with sharks, so can I,’ which, although it’s kind of insulting, I see as a positive.”
But the new relationship with sharks has transformed the island in another, more lethal way.
As the island’s popularity grows, so does its inability to cope with the volume of plastic, brought in by tourists and locals. 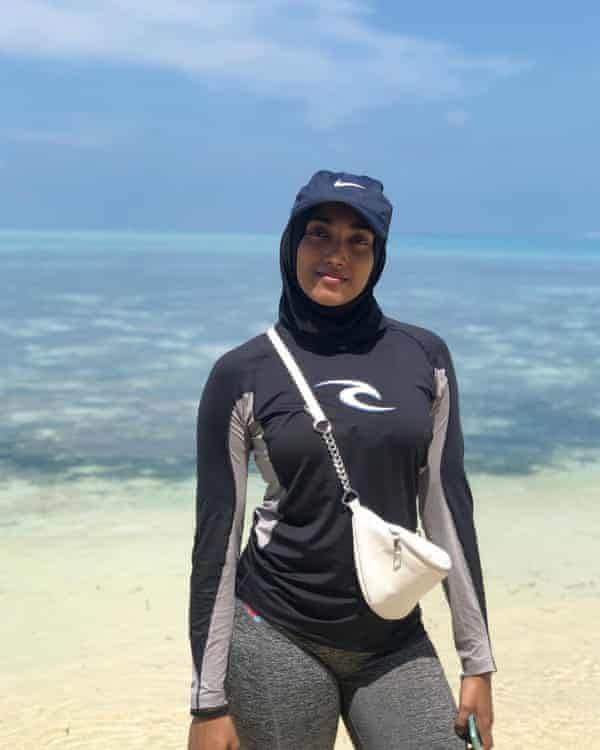 ‘If shark diving wasn’t discovered here, life now would be so different,’ says Hamna Hussain, a diving instructor on Fuvahmulah.
Photograph: Matt Porteous
The Maldives, isolated in the Indian Ocean, has one of the world’s highest population densities and little capacity to process plastic waste.
Plastic is now building up across beaches, streets, backroads, front yards and palm forests.
“This is the big issue in the Maldives,” says Ahmed.
“We have a big mountain of plastic on the island, and we don’t have recycling. Plastic bags, bottles, fishing lines … Everything is here and the mountain just keeps growing.”

Much of it is washing into the ocean, entangling marine life on the reef.
“I’ve seen many animals caught in plastic – manta rays, tiger sharks, silvertip sharks,” he says.
“The fish also eat the plastic and then local people eat this fish, so it’s very bad. The beach is [also] covered in plastic bottles and bags. People here just throw it on the ground.”

To mitigate the effects of the plastic waste, Ahmed and an underwater photographer, Jono Allen, with the support of the local council and mayor, set up a conservation organisation, Fuvahmulah Marine Foundation (FMF).
Its first goal is to work with the council to set up household waste separation scheme, sorting plastic, metals, paper, food and green waste so it can be processed on the island by hand. FMF is also trying to sort the current mountain of plastic on the island and reduce its size before it is transported to Malé, capital of the Maldives, for processing.
(There is now a recycling plant there set up by the environmental organisation Parley Maldives.)

There has been an island-wide introduction of reusable bags, water bottles, straws made from rice or paper, and cardboard food containers for locals and tourists.
Reducing the amount of imported plastic is seen as a key issue.
All the drinking water on the island comes in plastic bottles – more than 120,000 discarded plastic bottles every week.
So the foundation is encouraging tourists to bring their own reusable bottles and to stay at a hotel with a water filter, which reduces each tourist’s plastic footprint by an average of 21 bottles a week.
Reusable bags for shopping and containers for takeaway food would also help.

For Ahmed, protecting sharks and reducing plastic are part of the same battle.
“When I’m with the sharks, I feel like I’m in another world, like I’m in space or something.”
The plastic is a threat to that.
“I want to see the importing of plastic stop, especially plastic bags and plastic bottles,” he says.
“I want to see a plastic-free future here in my lifetime.”
Links :
Posted by geogarage at 1:25 AM