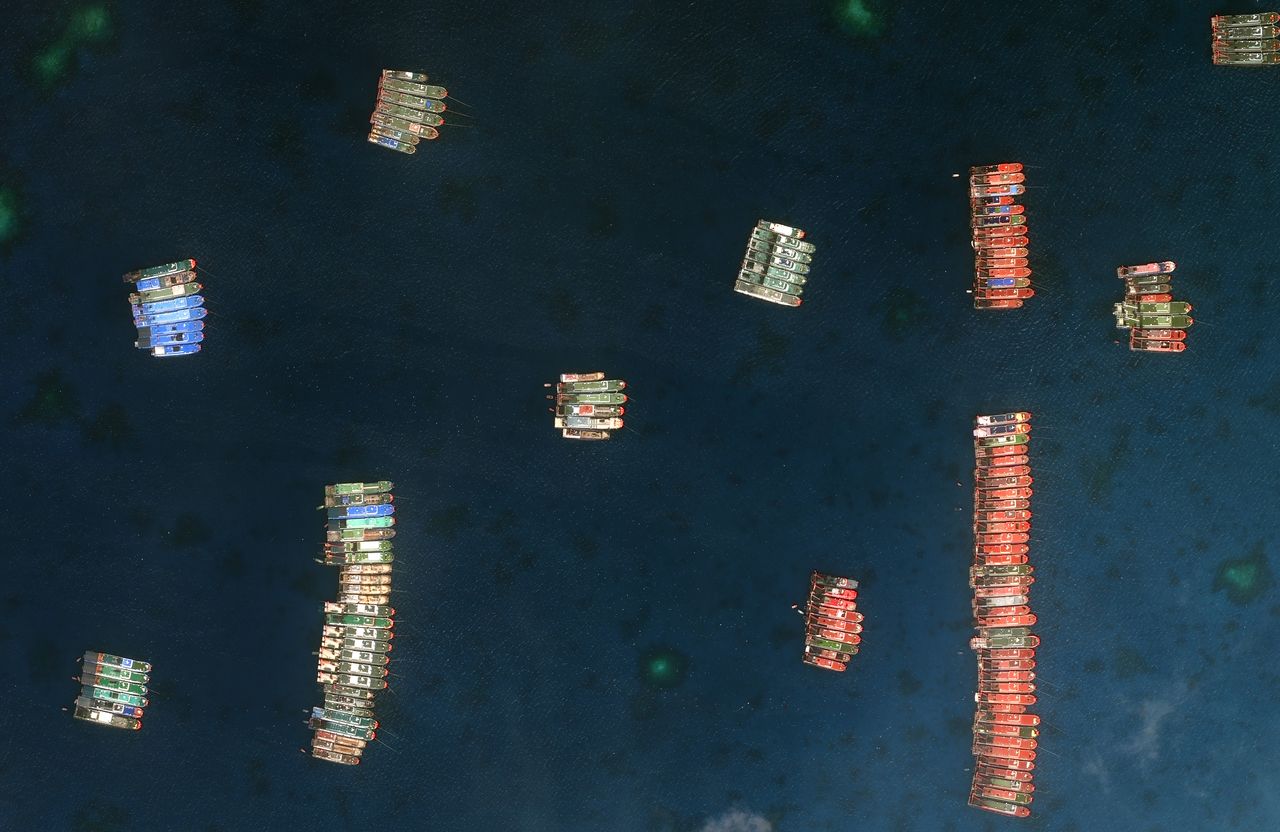 From WSJ by Chuin-Wei Yap

In Beijing’s push to become a maritime superpower, China’s fishing fleet has grown to become the world’s largest by far—and it has turned more aggressive, provoking tensions around the globe.

The fleet brings in millions of tons of seafood a year to feed the country’s booming middle class. Foreign governments, fishermen and conservation groups have accused the fleet of illegal fishing, including by using banned equipment and venturing into other countries’ territory.
That fishing has upended local economies and threatens ecosystems including around the Galápagos Islands, affected governments and fishermen say.
The Chinese fleet is helping the country stake out a bigger presence at sea, including by building a world-wide network of ports.
The vessels, rigged with winches and booms and pulling giant nets, can be twice as large as a naval patrol boat, at an average of almost 200 feet long.
Fishing crews have helped establish island settlements in waters subject to territorial disputes with neighbors.
An analysis of transponder and global vessel registration data indicates Chinese boats involved in distant-water operations—meaning outside a country’s own territorial waters—total as many as 17,000, according to London-based researcher Overseas Development Institute.
Official data and analyst estimates indicate China’s closest competitors in the industry, Taiwan and South Korea, have some 2,500 such vessels combined.
China’s foreign ministry said that legally registered vessels were far lower, at 2,701 as of 2019. China agreed to cap its fishing vessels at 3,000 in 2017, in response to World Trade Organization efforts to cut government subsidies that contribute to overfishing.

The ministry said that Beijing implements the world’s strictest oversight on distant-water fishing. It has toughened legal penalties on errant fishing in recent years.

Ecuador and Peru placed their navies on alert last year to track hundreds of Chinese trawlers massing near South American fisheries.
In Asia, governments and the fishing industry have complained of hundreds of Chinese incursions in their domestic waters. Indonesia has taken to periodically detonating seized Chinese trawlers in hopes it will deter other Chinese boats from poaching in its waters.

CHINA
EAST CHINA SEA
The sea near China is already one of the most crowded fishing areas in the world, pushing the country's distant-water fleet further away.
SOUTH CHINA SEA
The U.S. has signaled rising concern over the alliance of China's military and its fishing fleet, which has helped set up island settlements in the area.

SAMOA
In May, Indonesian authorities began investigating a Chinese tuna trawler where four Indonesian fishermen died on the high seas off Samoa, including allegations of illegal fishing. Beijing said it was looking into the case.

GALÁPAGOS ISLANDS
In August, hundreds of Chinese trawlers gathered near Ecuador's Galápagos Islands. Beijing said in response to concerns from Ecuadorian authorities that it requires its fishers abroad to comply with local laws.

From 2010 to 2019, Chinese-flagged or owned vessels accounted for 21% of global fishing offenses logged by Spyglass, a Vancouver-based fishing crime database, up from 16% the previous decade.
A 2019 global ranking by Geneva-based Global Initiative, a transnational crime watchdog, placed China first in the prevalence of illegal fishing by nations.

In the West African nation of Ghana, fishermen say that dozens of Chinese trawlers, equipped to fish at all depths, are venturing daily from their deep-sea license remits into Ghana’s sovereign waters, targeting shallow-dwelling fish that used to be a local preserve.

“Because the trawlers have depleted our fish stocks at a very fast rate, we all owe debts, and it has made our life extremely difficult,” said Kojo Panyin, a 53-year-old fisherman in Axim, a Ghanaian fishing village.
Such fishing also destroys the nets of local fisherman, he said.

For China, the industry feeds a rapidly growing middle class and creates tens of millions of jobs in fishing, aquaculture and seafood processing.
It also reflects China’s growing assertiveness. Distant-water fishing is enshrined in Xi Jinping’s national development blueprint and is a key part of his Belt and Road global infrastructure plan, which includes ocean routes.
“The industry is important for ensuring national food security,” the blueprint says.
“It is of great significance in safeguarding national maritime rights and interests.” 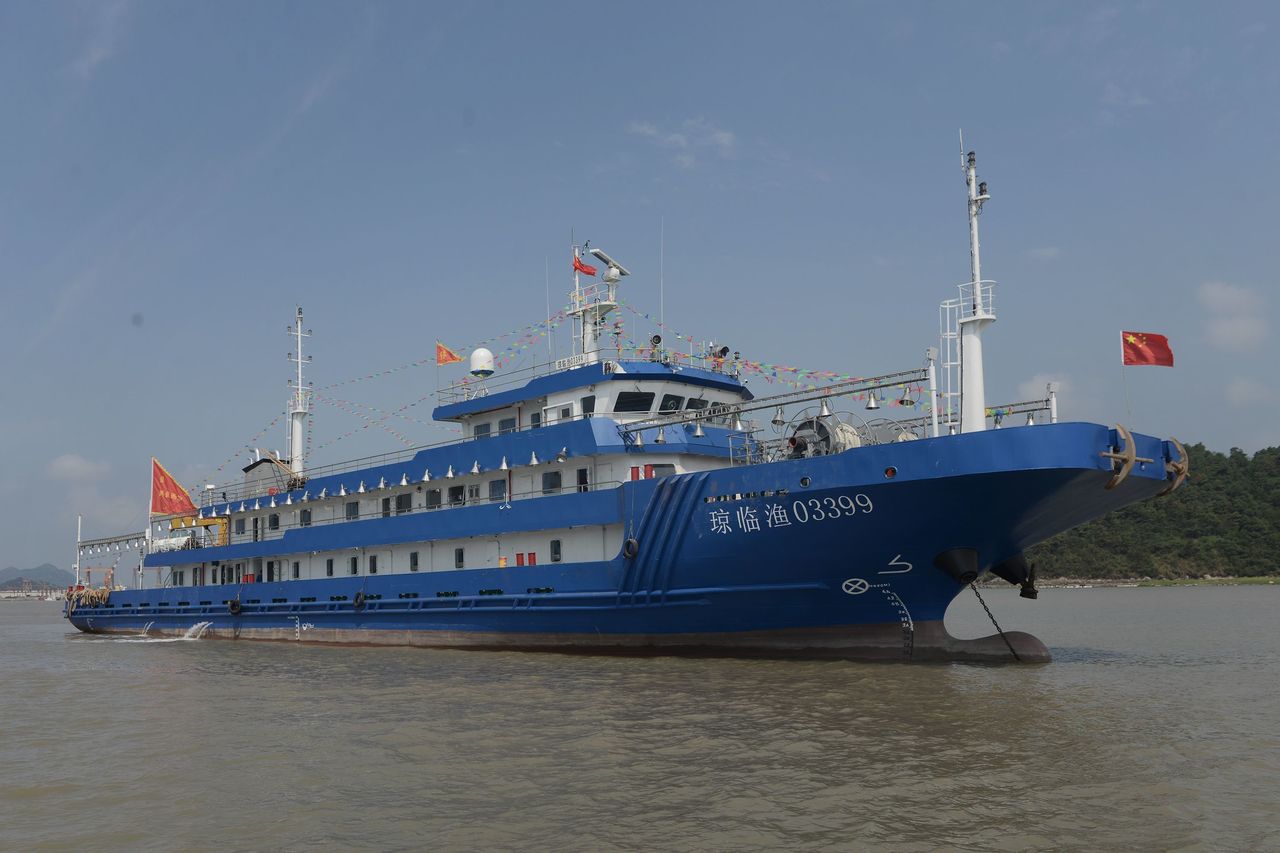 Mr. Xi’s plan called for the world-wide development of 29 distant-water fishing bases, which help to project Beijing’s vision of itself at the center of a web of global infrastructure.

In West Africa, Fuzhou Hongdong Pelagic Fishery Co. is using $60 million in state funds to expand a fishing port in Mauritania, China’s largest distant-water base, state media reports say. China has no naval base in the region.

Chinese companies also are building a fishing port in Pakistan, near a major oil route and where Beijing jockeys for geopolitical influence.

China's demand for seafood has soared over the decades
Sources: Wind (imports); The Stimson Center
In its first full year of operation, the fleet harvested some 20,000 metric tons of seafood, official data show. At first, the country sold almost all of its distant-water catch abroad.
Now the fleet sends two-thirds of its harvest home to China, according to state data.

Since 2015, China’s distant-water catch has averaged two million tons a year, according to state data, which analysts say could undercount the actual total.

The nation now is the world’s largest seafood consumer and in 2019 was the third-largest seafood importer, after Europe and the U.S. Seafood imports to China totaled $15 billion in 2019, double the figure from four years earlier. Ecuador, the world’s largest shrimp exporter, sells twice the volume of shrimp to China as it does to the U.S., France and Spain combined.
While three-quarters of the fishing fleet is now privately owned, the Chinese state maintains a large presence in the industry.
The nation’s largest distant-water firms, China National Fisheries Corp., a unit of an agricultural conglomerate directly managed by the central government, and its subsidiaries, remain state-owned.
Closely held operators keep close ties with the government, rely on state subsidies and often have state investors. The chairman of Fuzhou Hongdong, which is building the port in Mauritania, is a delegate to China’s legislature.
The companies didn’t respond to requests for comment.
The industry helps China act on territorial claims, such as by sending fishermen to set up settlements on previously unoccupied atolls in the South China Sea.
In turn, the state regularly defends fishing interests.
The Chinese navy, coast guard and paramilitary often join hundreds of fishermen in motorboats in regional seas where China has built artificial islands with military-capable facilities, including air strips, jet fighter hangars and naval bases.
Vietnamese officials say a Chinese coast guard ship sank a Vietnamese fishing boat in April near the Paracel Islands, which both nations claim. Beijing said the Vietnamese vessel collided with the Chinese.
The incident followed Chinese altercations with fishing vessels from other South China Sea claimants such as the Philippines and Indonesia over the years.
‘Rule-breaking’
Maritime law allows coastal states varying levels of control over seas up to 200 nautical miles from their shoreline.
Most states seek to restrict foreign operations in their territorial waters, including fishing.
In October, Malaysia’s maritime authorities detained six Chinese fishing vessels, accusing them of trespassing in its waters.
In August, some 300 Chinese trawlers fished near Ecuador’s Galápagos Islands.
Ecuador said it was the largest gathering of such Chinese vessels, and accused them of using illegal means to evade being identified, such as turning off tracking systems and altering their names. 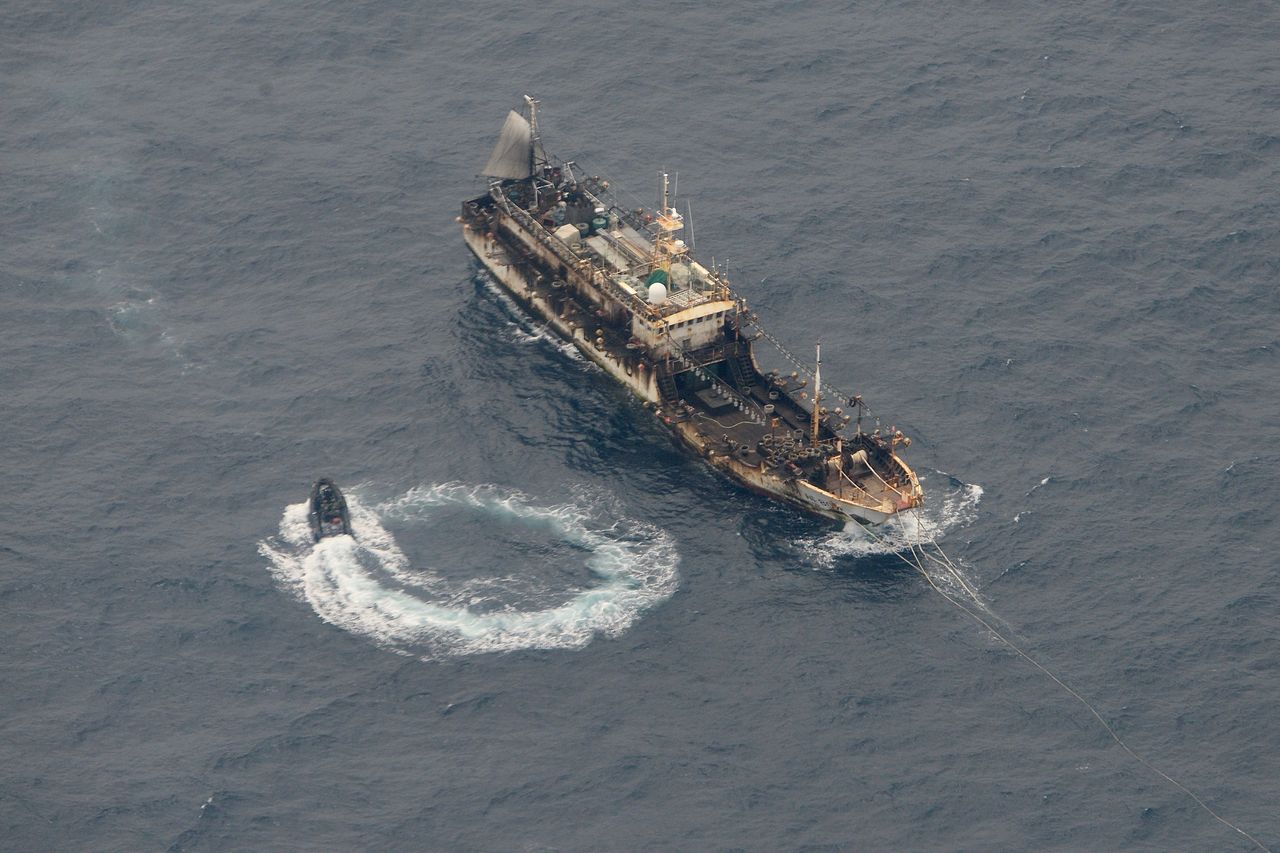 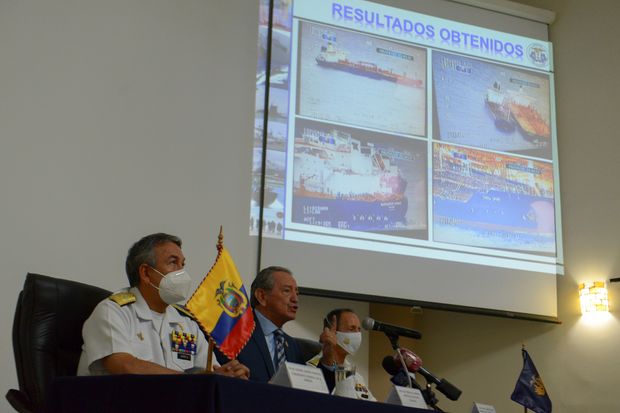 Ecuadorean defense officials held an August 2020 news conference
about the presence of the Chinese fishing fleet.
Photo : Segundo Mendez, Reuters
Ecuadorean officials said Chinese fishing threatened the biodiversity of the Galápagos, where some animals depend on the squid that the Chinese vessels were netting.
China’s foreign ministry has said Beijing would halt the fleet’s fishing there from September to November.
“Over the past five years, there has been a giant transformational shift with the Chinese distant-water fleet,” said Steve Trent, co-founder of London-based conservation group Environmental Justice Foundation.
“They are devastating the small [open water] fisheries, the fish that coastal communities depend on for their livelihoods.”
Ghana reserves an area six nautical miles from shore for local fisheries. Chinese trawlers increasingly ignore these poorly policed rules, fishermen and conservation groups say.
The modern Chinese industrial trawler can fish 700 tons a day, a volume that would take the largest African fishing canoe six months to harvest, industry data show.
Residents of Axim, which largely relies on fishing for income, now have to drive to another town 80 miles east to buy the catch from the Chinese, said Mr. Panyin, the fisherman. 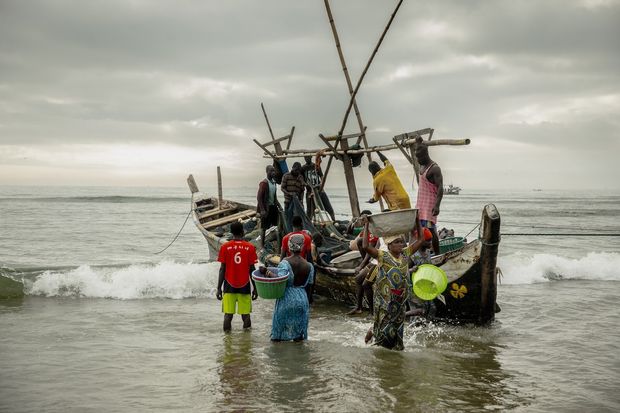 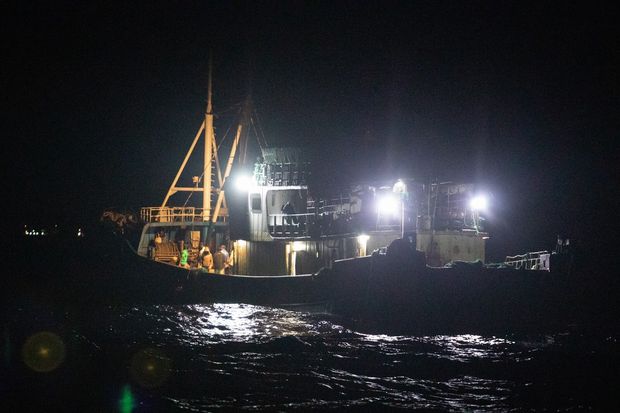 Chinese trawlers typically operate under the Ghanaian flag.
Photo : EJF Environmental Justice Foundation
Ghana’s marine police in June detained the Chinese-owned trawler Lurongyuanyu 956, accusing its operators of using illegally-sized nets.
“You see this vessel through global fishing logs, going back and forth from coastal waters to Ghana,” said Dyhia Belhabib, Spyglass’ developer and principal investigator for conservation group Ecotrust Canada.
China’s foreign ministry said it had taken note of the allegations.
State records show the vessel is owned by eastern China-based Rongcheng Marine Fishery Co. Staff there declined to make anyone available for comment.
Fishing communities often are overshadowed by larger priorities in bilateral trade.
Ghana’s fishing output last year of around $480 million is a fraction of its $7.3 billion annual trade with China, which includes oil and metals. Beijing funds big Ghanaian projects from dams to theaters.
How should governments monitor fishing by other countries?
In neighboring Sierra Leone, where China has invested billions of dollars to develop mining and highways, local authorities say that illegal Chinese fishing drains $29 million annually in state revenue—but that they are ill-equipped to police it.
In August, Sierra Leone’s fisheries ministry said it had lost track of three Chinese-owned trawlers that fled after being charged by police a month earlier with illegally fishing within Sierra Leone’s territorial waters.
Even on the high seas, which are relatively free from the scrutiny of sovereign authorities, Chinese trawlers have come under investigation.
In May, Indonesian authorities began probing a Chinese tuna trawler where four Indonesian fishermen died while on the South Pacific Ocean.
Beijing said it was looking into the case. Indonesian fishermen working aboard say that they were made to harvest shark fins, a popular delicacy in China, in breach of regionally-agreed rules on fishery management.
“From October, we stopped catching tuna,” said fisherman Rizky Alvian.
“Every day, we catch shark. Just shark.” 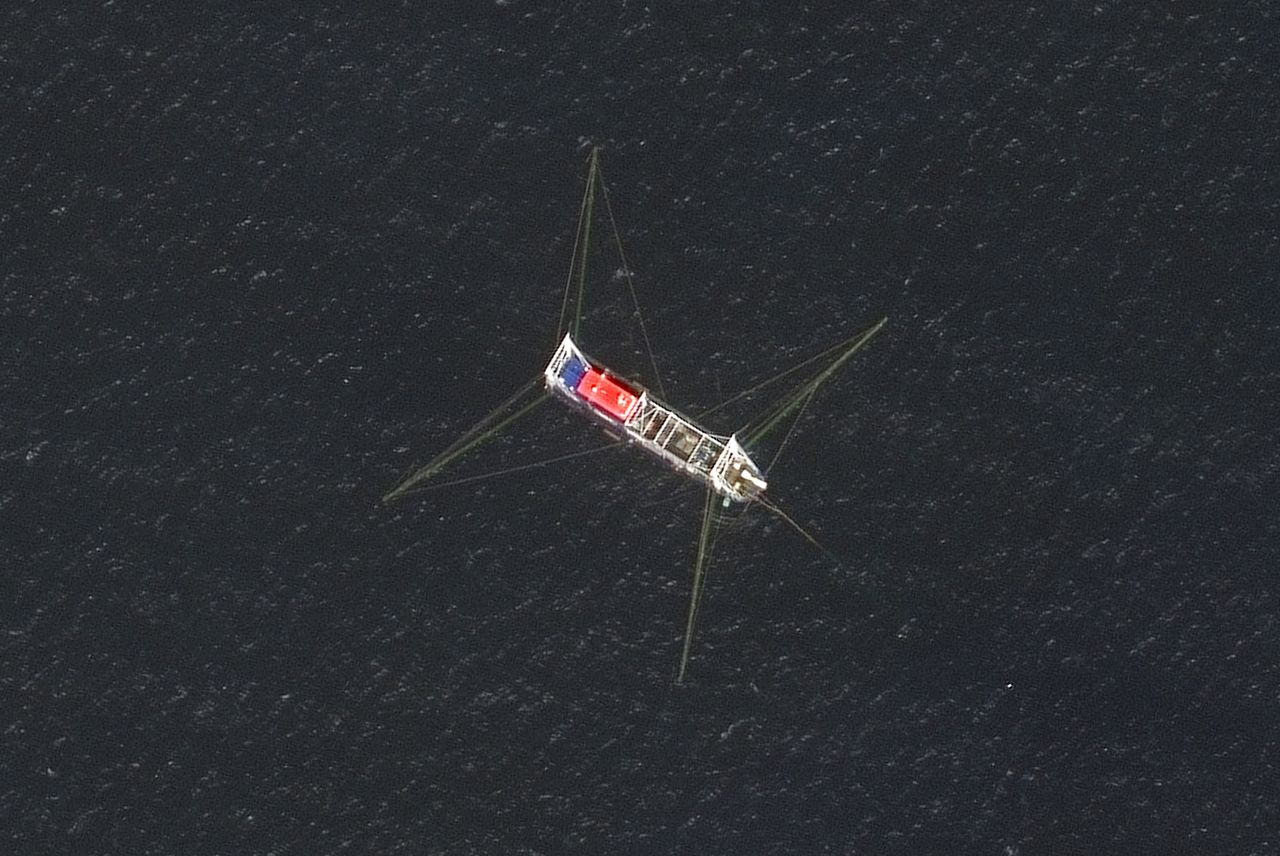 A Chinese fishing vessel in the Whitsun Reef located in the disputed South China Sea.
Photo : Satellite image 2021 Maxar Technologies
Links :
Posted by geogarage at 1:34 AM