Mapping and monitoring the wreck of La Surveillante 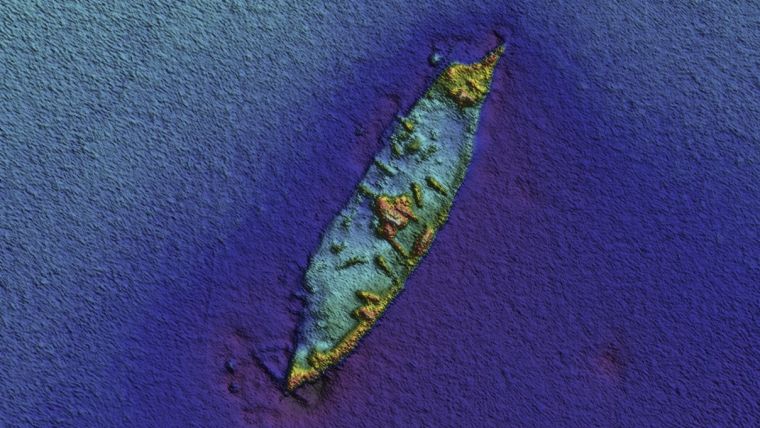 Ongoing collaboration between INFOMAR and the National Monuments Service continues to produce exciting results on Ireland’s underwater cultural heritage.
Last autumn, the Geological Survey Ireland’s RV Keary resurveyed the 1797 wreck of the French frigate La Surveillante in the course of its 2020 INFOMAR operations along the south-west coast.

The wreck was originally surveyed in 2007 by the Marine Institute’s Celtic Voyager as part of the initial INFOMAR survey of Bantry Bay.
The INFOMAR inshore fleet are continuing operations in Bantry Bay and a resurvey of La Surveillante was conducted at the end of September 2020.
The data acquired includes high resolution imagery of the wreck showing in great detail its condition on the seafloor today. 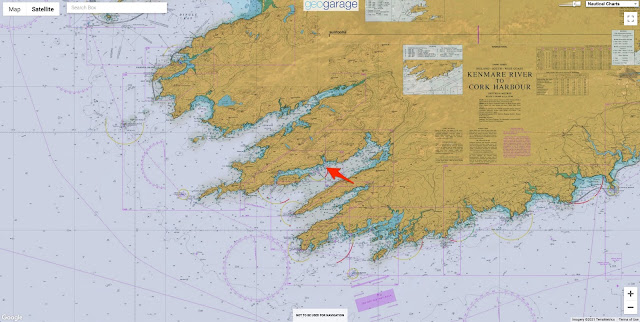 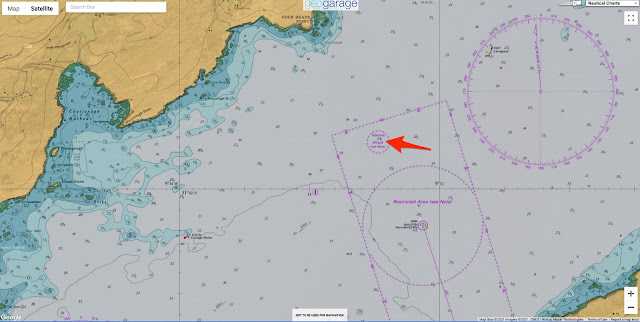 Localization with the GeoGarage (UKHO nautical raster chart)
Dynamic Environment
Revealing the mysteries and secrets of a historic deepwater shipwreck is not easy.
Monitoring and managing such sites can be equally challenging, particularly when they lie at depth, with immense volumes of water covering the wreck on the seabed.
In the case of La Surveillante, this is complicated further by the dynamic environment of a working harbour and poor visibility.
Technology is therefore proving to be a useful tool for underwater archaeology, assisting in the visualization of such wrecks and thereby helping to inform a management strategy for monitoring and protecting these important sites. 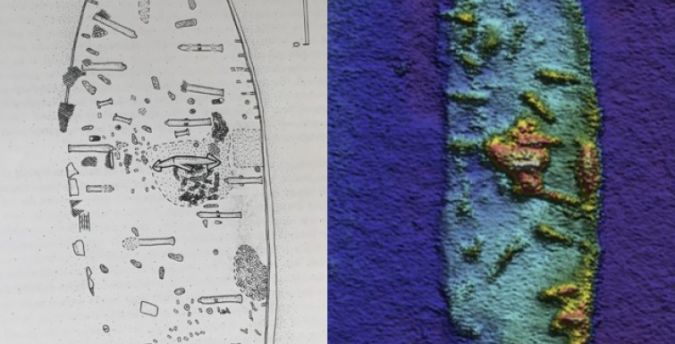 NMS site plan of 'La Surveillante' generated during the detailed survey of the wreck undertaken by Dr Colin Breen in 1999-2000. When compared alongside INFOMAR’s La Surveillante 2020 imagery, both are impressively similar, suggesting the wreck site is relatively stable. (© National Monuments Service & INFOMAR)
Scuttled in Bantry Harbour

Built as a warship, the three-masted frigate La Surveillante was fully copper-sheathed and carried 32 iron guns.
She was involved in several successful naval engagements against the British during the American War of Independence (1775-1782), but it is from the year 1796 that the fate of La Surveillante becomes inextricably linked to Irish maritime history.
The ship was part of a French fleet involved in an unsuccessful attempt to invade Ireland and overthrow English rule in the country.
Bad weather and poor leadership challenged the campaign from the start, leading to the scattering and dispersal of the 48-strong invasion fleet.
A sizeable number of the fleet’s ships arrived off the Bantry coast in December 1796 but they were forced to return to France due to bad weather.
La Surveillante at that point was no longer considered seaworthy and its crew, cavalry and other troops on board were transferred to some of the remaining ships in the fleet.
Rather than allow La Surveillante to fall into British hands, the ship was scuttled in Bantry Harbour (Breen, 2001; Brady et al., 2012). 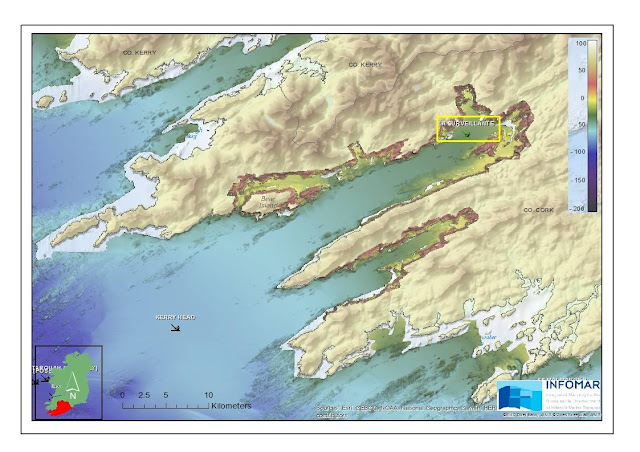 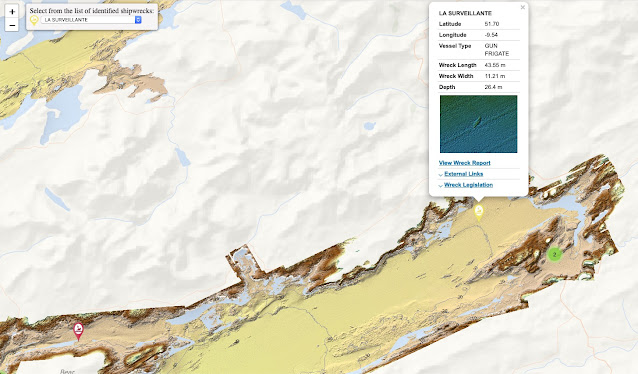 Infomar shipwreck viewer
see also National Monuments Service
Comparison of Datasets
For nearly 200 years, the 620-ton La Surveillante remained undiscovered.
Then, in 1981, during marine surveys following the 1979 Whiddy Island oil terminal disaster, the remains of the frigate were identified on the seabed. Between 1999 and 2000, the National Monuments Service undertook a multidisciplinary assessment and survey of the wreck, under the archaeological direction of Dr Colin Breen, which brought the cultural significance and extent of the site to light for the first time (Breen, 2001, 1). 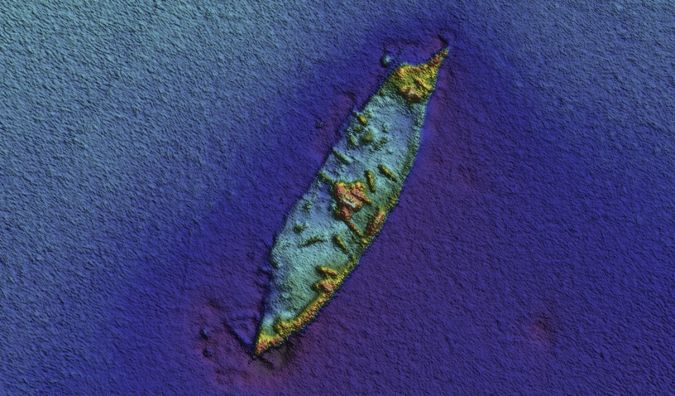 Re-survey imagery of the wreck of 'La Surveillante' by the RV Keary as part of the 2020 INFOMAR Programme.
(© INFOMAR 2020)
The recent INFOMAR imagery of La Surveillante shows clearly the wreck structure and a number of archaeological objects within the wreck, among them the remaining iron guns, as well as specific features, including the damaged stern.
Orientated NE-SW and lying in some 35m of water, the bow faces south-west.
Also clearly evident is a centrally located concreted mound, within which are visible brick and iron, chain, iron flanges and the ship’s large bower anchor, vertically upended mid-ships, confirming what was recorded in the earlier archaeological surveys (Breen, 2001, 65-67).
When placed alongside the National Monuments Service’s site plan from the 1999-2000 survey, the similarity is striking, indicating that the site is relatively stable within the silty-sandy seabed of Bantry Harbour.
The most recent resurvey by INFOMAR allows for a comparison of datasets acquired and assessment of the wreck following not only a 13-year interval from its initial seabed survey in 2007 but also comparison with the archaeological results from the NMS project in 1999-2000.

Left: The GSI inshore mapping fleet at sea during INFOMAR survey operations (© Geological Survey Ireland 2020) Right: The Marine Institute's Celtic Voyager at sea during INFOMAR survey operations. (© Marine Institute 2020)
Recording Deepwater Shipwreck Sites
La Surveillante is one of the most intact 18th-century wrecks in Irish waters, the remains surviving from the orlop deck down to its copper-sheathed keelson; as such, it is of critical importance for our understanding of frigate construction and ships from that period as well as being a tangible link to one of the major maritime events of that time in our history.
The seabed mapping currently being carried out by INFOMAR is of immense use to archaeology, particularly when recording deepwater shipwreck sites that are not readily accessible to diving
The mapping can be used as a monitoring mechanism to assist in our management of sites like La Surveillante, helping to reveal potential impacts both cultural and natural, including increased threats from climate change.