Science of Summer: How do ocean waves form?

One of summer's greatest pleasures for the lucky beachgoer is listening to the rhythmic lapping of ocean waves.
A number of factors power this trance-inducing phenomenon, but the most important generator of local wave activity is actually the wind.
"The main driver or cause of waves is wind," said Wayne Presnell, a meteorologist with the National Oceanic and Atmospheric Administration's National Weather Service Marine and Coastal Services Branch.

Presnell explained that wind speed and duration help in determining the size and frequency of ocean waves. Another factor is called "fetch," referring to the span of water over which a breeze blows, and the longer a fetch, the more energy a wave can build up.
[See Photos of Monster Waves]
"Fetch has some effect on waves at the beach," said Presnell, "but mostly the ones you see playing there are generated by local wind and the wind speed for that day."

To get a sense of wind-created waves, simply blow over a bowl of liquid, for instance.
A series of waves will follow your exhalation's path even when wind is blowing out to sea, waves still come ashore as a result of the shape of the ocean basins.
"That's the general motion of the ocean, if you will — it pushes water toward the shore," said Presnell.
Envision the sloshing in a bathtub, Presnell explained: When some force is added to the water, the sloshing heads toward the edge of the tub and then goes into a back-and-forth motion. At a certain point, the wave tilts enough that it curls over, creating what is called a breaker and showing off the characteristic, rolling shape of a crashing wave, Presnell explained.
The area between the shore and the first line of breaking waves at the beach is known as the surf zone.
"The surf zone is where people do most of their activities, like fishing and swimming — it's where most people go and have fun at the beach," Presnell told LiveScience.

Watch out for the rips

All that ocean water being thrown up on the beach by the waves must flow back out.
This outflow does not happen uniformly, because the water will return to the sea where it is easiest to do so, such as through a break or dip in sandbars offshore, or near a pier or jetty.
In these situations, strong "rip currents" can develop that put swimmers at risk of drowning.
[The Science of Rip Currents (Infographic)]
"As water comes up on shore it loses momentum and energy and it has to go back toward the ocean," said Presnell.
"A rip current is caused when certain things on the ocean floor funnel that water into a narrow stream."
Rip currents often appear frothier or darker than surrounding water, which helps swimmers (and lifeguards) spot them.
In order to escape a rip current, swimmers should not try to swim straight back to shore, because they will be fighting the current and exhausting themselves.
Instead, swimmers should aim to get free of the narrow rip current by moving parallel or diagonally to shore.
Alerting a lifeguard, if one is on duty, is also a good idea.
"Yell for help, and draw attention to yourself," said Presnell.
"Then do your best to get back to shore by swimming parallel or at an angle where you don't feel the resistance." 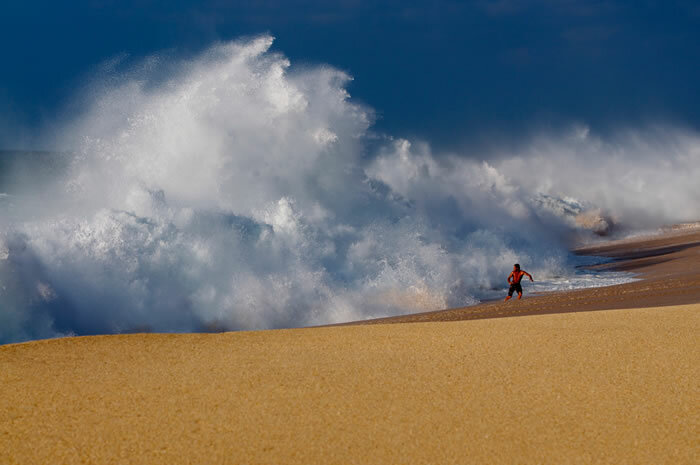 Before frolicking in the waves, consult a lifeguard or other information source at the beach to get information about that day's conditions and if rip currents are expected.
"The first thing to do or remember is to check on the condition of the ocean before you go in there," said Presnell.
"Know what you're getting into before you get into it."