The US is home to only 7 offshore wind turbines. But one startup is betting on autonomous underwater vehicles to map the seafloor up to 10 times as fast as current methods. 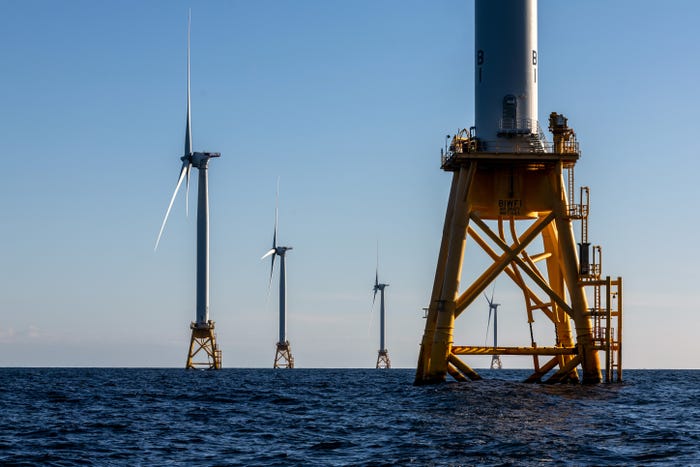 The US has more than 20 new projects along its Atlantic and Pacific coasts, as well as along the Gulf of Mexico.
John Moore/Getty Images
From Business Insider by Lily Katzman
The US is racing to accelerate its production of offshore wind turbines.
But those efforts could be slowed by what lies beneath the ocean.

In spring 2021, the Biden administration set a lofty goal of producing 30 gigawatts of offshore wind energy by 2030.
That — combined with the passing of the Inflation Reduction Act, which provides a 30% tax credit for offshore wind developers that break ground before the beginning of 2026 — has led to a push of more than 20 new projects along the US Atlantic and Pacific coasts, as well as along the Gulf of Mexico.

Jesse Baldwin, the head of US site investigation for Ørsted, one of the world's largest developers of offshore wind power, told Insider the US's subsurface was more complex than people might think. Baldwin said Ørsted had a dedicated team of more than 100 people to interpret marine data for the company's offshore wind developments.

To jump-start projects, companies first have to conduct a survey of the seafloor.

Joellen Russell, an oceanographer and biogeochemical-dynamics professor at the University of Arizona, told Insider it should be a high priority to find out what's at the bottom of the ocean and the commercial uses already in place, such as cables, gas and drilling, sewage pipes, fishing traps, and aquarium research.
"This is part of our collective national resources," she said.
"They're becoming more and more accessible and important to our security and our energy strategy."

Russell added that the US had been especially slow to take advantage of its technology solutions for offshore projects.
"Why is it that we can't basically Google Map visit our shelf resources the same way we can do at our national parks?" she said.

The answer to Russell's question, and perhaps the offshore industry's outdated surveying process, is one that Bedrock CEO and cofounder Anthony DiMare has been trying to solve with the help of his team's autonomous underwater vehicles — which could enable the US to be more efficient in its path toward renewable energy. 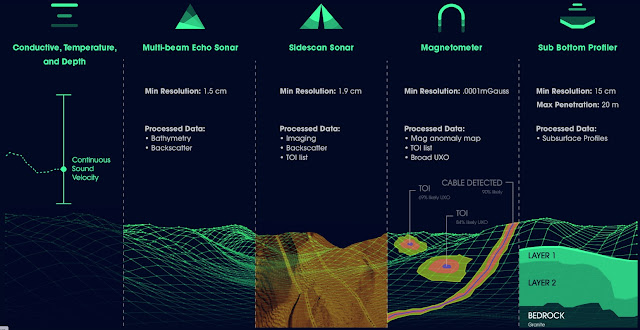 Before companies can take steps to construct wind turbines, they have to map the seabed using a "geological survey," which involves mounting sonars on manned ships to map the layers of the ocean floor.
This helps developers determine information such as the sedimentary makeup and where to lay cable routes, pound the turbine's steel pipes (called piles), and anchor boats.

But the 200- to 300-foot vessels can be loud enough to hurt marine life and can cost up to $350,000 to operate, DiMare said.
Because these fleets are also used for oil and gas exploration, the demand for ships outweighs the supply.

Any activity in the ocean runs the risk of harming marine life though an Ørsted spokesman said the company and others involved in offshore wind don't employ some of the more damaging techniques often used in oil and gas exploration.
The spokesman also said Ørsted is working on technology for detecting and protecting whales during wind farm construction.

The initial surveying process could take up to six months.
And even after a developer does get a ship on-site, it could take another six months to process the data and conduct a full review. If a company misses a survey, its project stalls.

DiMare sees these bottlenecks as one of the main reasons the US might not hit its offshore-wind targets, which the White House said would generate enough electricity to power more than 10 million homes for a year.

"What this has created is a demand for more capacity to move sonars around the ocean in the most scalable, quick, efficient, and environmentally friendly way possible," he said. 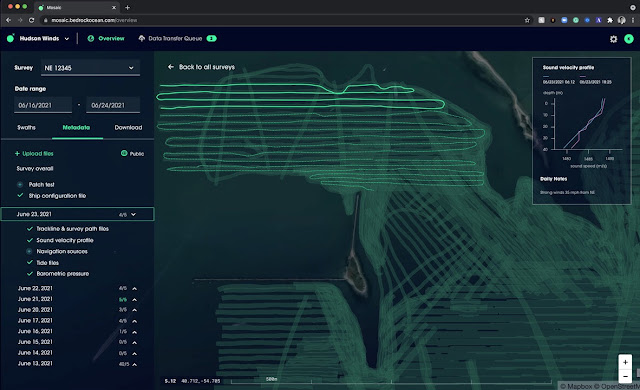 How AUVs could fix the problem

With Bedrock, DiMare's team could fly one of their electric autonomous underwater vehicles to a survey location in just 24 hours.
"We want to be doing these in fleets so that it doesn't take two to three months. It could take two weeks," he said. Bedrock's goal is to make the seafloor process up to 10 times as fast as current methods, DiMare told Emerging Tech Brew.

The startup's vehicles function entirely below the ocean's surface and can submerge up to 300 meters, removing the risk of weather delays. Its vehicles also have smaller, higher-frequency sonars than those of the vessels currently used, DiMare added, which means its AUVs can operate without a permit because they aren't a threat to marine life.

Bedrock's AUVs — which launch from shore and rely on local internet for faster data access — are designed for scale.
"Because these are really small AUVs and not large, we can make hundreds in the same amount of time it would take you to build one survey ship," he said, adding that it's "hell of a lot easier" to build an AUV than a car.
While the startup is in its early stages — Bedrock has only two AUVs built — DiMare said it had secured inventory for up to 10 vehicles. 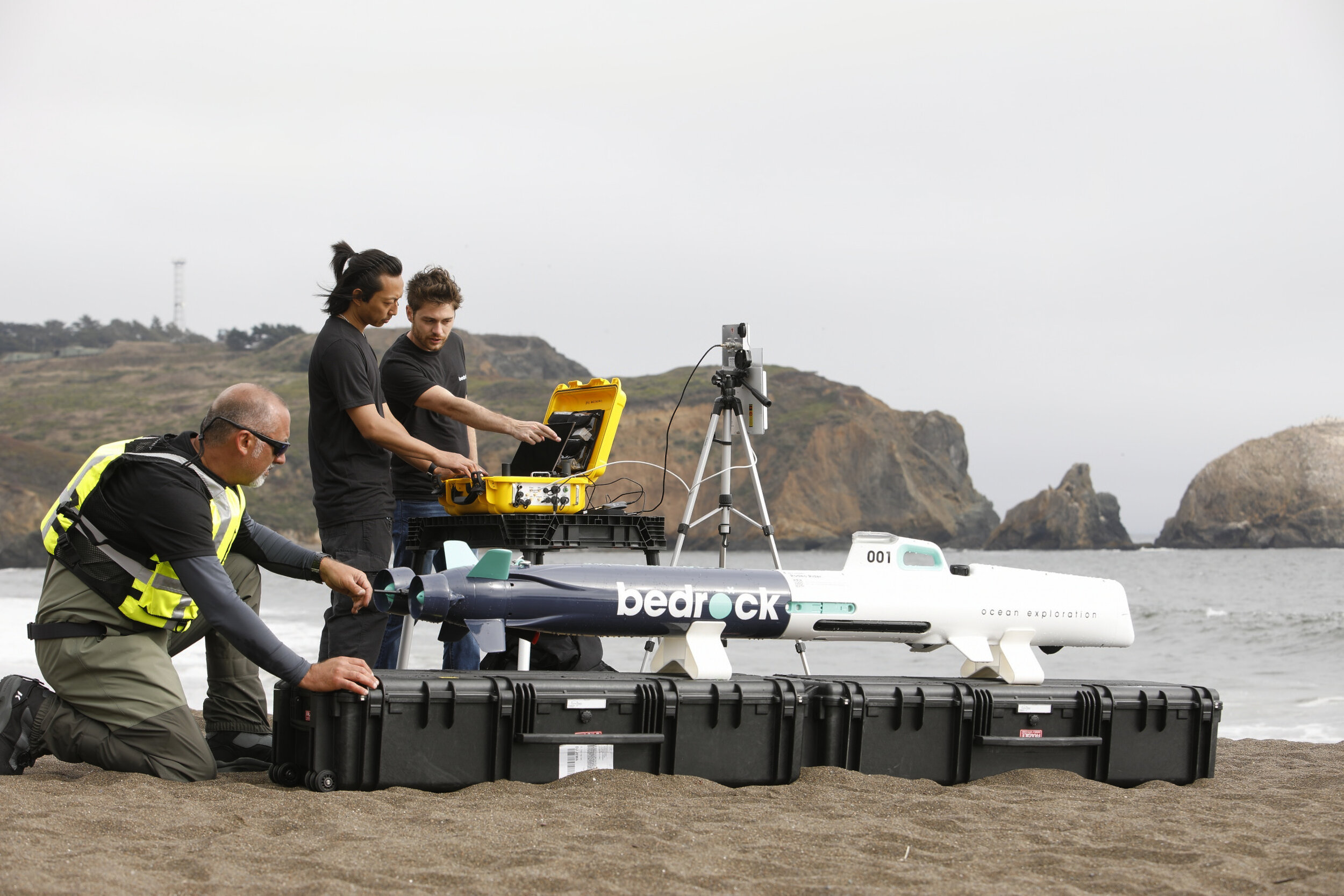 Mapping efforts are vital to the future of offshore energy

Only 23.4% of the ocean's floor has been mapped, according to the Nippon Foundation-GEBCO Seabed 2030 Project, an international collaboration directed at producing a complete map of the world's seafloor by 2030.

The project, which received formal US participation in June, has more than 40 international organizations and networks across 50 countries working together to compile critical seabed data.

Bedrock's cloud platform, Mosaic, is one of them.
With it, users anywhere in the world can access free and publicly available seafloor data.
"This is something we believe is critical for the expansion of human knowledge, for the acceleration of projects, for the advancement of science," DiMare said.

Ørsted is also involved in the data-sharing process.
An Ørsted spokesperson told Insider the company is collecting important data about the ocean floor and sharing it with the National Oceanic and Atmospheric Administration to help the agency better understand the effects of the climate crisis.

While there's still work to be done to get a full picture of the "unseen," Russell sees the push for offshore wind farming in the US as one of the ways to reduce our reliance on fossil fuels.
"I'm hoping that we get that seafloor map so that we can make wise decisions about where to put our resilience infrastructure, our wind farms," she said.
"If we do it well with care and foresight," she added, "we could see an explosion of resilience and prosperity that helps regrow and enhance our ocean infrastructure."
Links :
Posted by geogarage at 1:59 AM