The secrets being revealed by ocean garbage patches 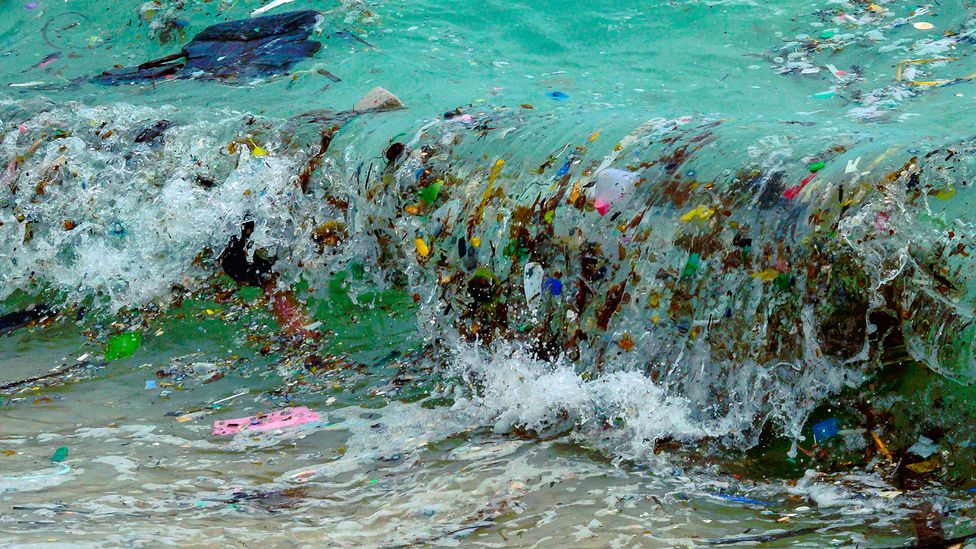 (Image credit: Mladen Antonov/AFP/Getty Images)
From BBC by Hope Ngo
The Great Pacific Garbage Patch is an enormous agglomeration of plastic waste floating in the world's largest ocean, but it's not the only one and now scientists are trying to work out how to clean them up.

Reach Penaflor is a man with a mission.
Since 2009, he has been working closely with the River Warriors, a group bent on cleaning up estuaries feeding into the Pasig River, which runs through the Philippines' largest urban area, Metro Manila, and is notorious for its noxious smells.
Scientists describe the Pasig as the river most responsible for polluting the marine environment.

When the clean-up first started, so much solid waste sat on top of the water that it had to be removed by hand; women volunteers waded into the polluted waters with little to no protective gear before dredging could begin.
"They needed to dig deep to get things out, wearing nothing but gloves for protection," Penaflor recalls.
"I decided to work with them and could only last half a day.
I couldn't stop itching and I couldn't get rid of the stench."

Penaflor and those he works with are aware of the Pasig River's dubious reputation, as well as the Sisyphean task of trying to turn things around.
The Philippines produces more marine pollution than many places in Asia, and, perhaps surprisingly, most of that garbage stays close to shore.

Britta Denise Hardesty, a senior principal research scientist of the oceans and atmosphere for Australia's national research body, the Commonwealth Scientific and Industrial Research Organisation (CSIRO), says there are plenty of misconceptions involving the waste we see in the ocean.
While in some places we can see it floating within our line of sight, at others ocean currents can sweep it out to sea and cause it to accumulate in distant plastic soups, such as the "Great Pacific Garbage Patch", which sits between Hawaii and the west coast of the United States.

Much may have been made of the highly publicised Pacific Patch, but it is only one of the gyres, or circulating ocean currents, which moves around the world's oceans in a never-ending circle.
The gyres are part of the "ocean conveyor belt" driven by currents moving across the surface of the ocean flowing in a clockwise motion in the north, and a counter-clockwise motion in the south.
Because the currents also behave like enormous whirlpools, they end up pushing debris closer to the middle, where it can then accumulate in higher concentrations, thanks to diminished wind and wave action. 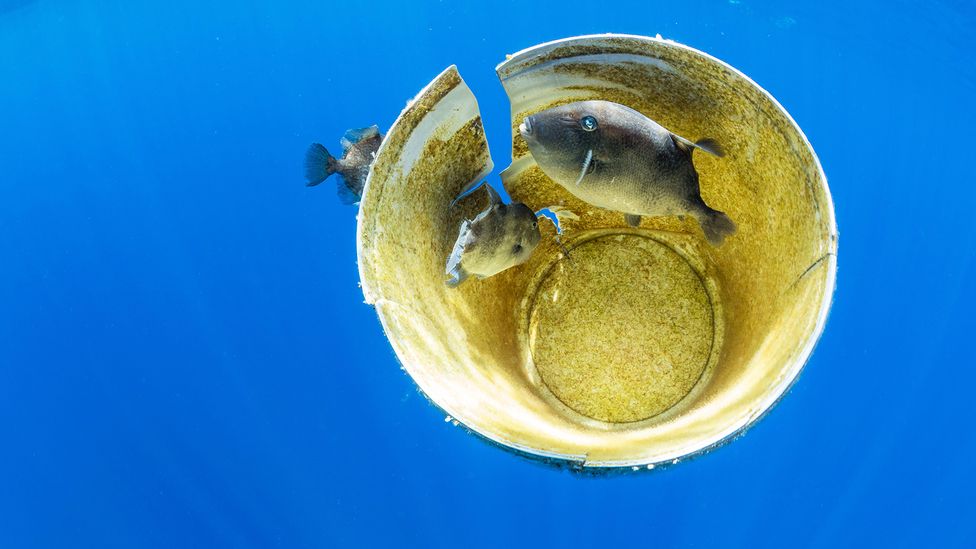 Plastic debris that does find its way into the open oceans can drift for years if it remains buoyant and can become a form of shelter for some sealife (Credit: Alamy)
Britta Baechler, senior manager of ocean plastic research at the environmental campaign organsiation Ocean Conservancy, says: "In total there are five major oceanic gyres.
All five gyres are large systems of circular ocean currents which accumulate floating objects including plastics, [but] the North Pacific Gyre is the most-researched of the oceanic gyres, and less is known about the other four." The others are located in the South Pacific, the North and South Atlantic, as well as the Indian Ocean, and a host of smaller gyres.

"What is important to know or to note is that most of the plastic or the waste that's lost into the environment doesn't go to these garbage patches," says Hardesty.
"It doesn't go out into the middle of the ocean.
Most of our debris actually ends up trapped in the back shore vegetation on land."

Indeed, most of the debris that can be found in the ocean is already out there – at least half of that comes from fishing trawlers that move in and out of international waters, and includes lost or abandoned nets and fishing gear.
Then there are items which were once part of ocean cargo but eventually became lost at sea.
The World Shipping Council estimates that an average of 1,382 containers are lost to strong winds and high seas every year, but the numbers could be much higher, since container losses aren't reported unless the steel boxes which have been swept overboard are known to be transporting hazardous materials.
Thanks to ocean pollution, the gyres have become floating, soupy, masses of microplastics
One of the most widely reported container losses of the 20th Century involved more than 29,000 bathtub toys including plastic ducks, turtles, frogs and beavers when they fell off the back of a cargo ship heading to the US from to China in 1992.
These ducks later made news because they began turning up on beaches around the United States and continued to do so for more than two decades after the incident.

While that may sound like good news, not all of it is positive.
Hardesty adds that if there are hundreds of tonnes of garbage that are making their way into the ocean, more buoyant items can still break through the littoral zone, which extends around 8km (5 miles) from the shore.
From there, a combination of wind, current, and waves can break down rubbish and take the pieces thousands of miles from their point of origin.

"[For instance] we know that items moved all the way from Japan to the west coast of the United States in under a year after the [2011] tsunami blew large objects like motorcycles and floating docks across the Pacific Ocean in a year, or two years," she says.

It is the most buoyant objects caught up in the ocean currents that can eventually come to reside in the Great Pacific Garbage Patch, which was first proposed by oceanographer Curtis Ebbesmeyer in 1997.
He had spent decades studying and tracking ocean debris and it was he who described the patch as one of the planet's "most important geological features". 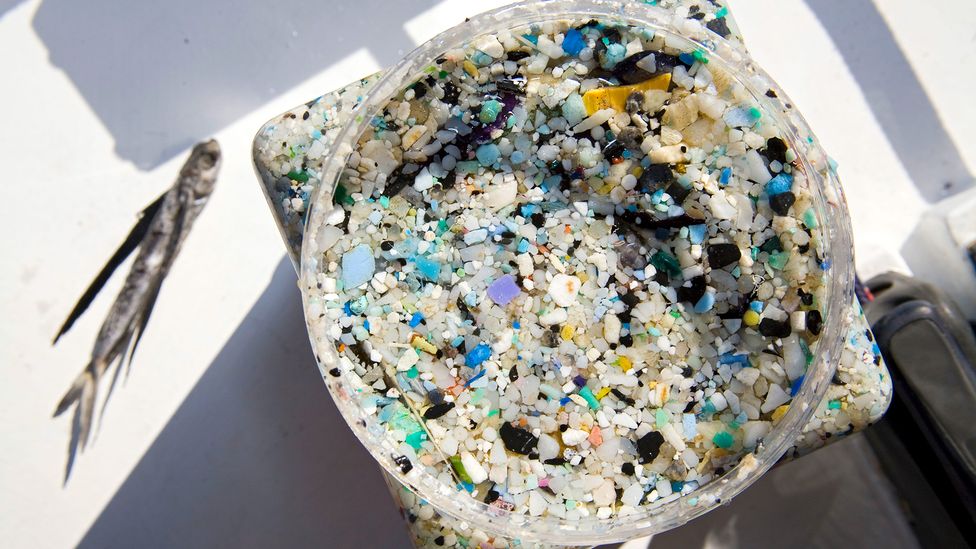 Drifting plastics break down into smaller microplastics which have been detected in sand on beaches all over the world (Credit: Alamy)
Thanks to ocean pollution, the gyres have become floating, soupy, masses of microplastics, which results from the physical breakdown that begins as soon as plastic first escapes into the sea.
While heavier organic materials such as wood and metal might eventually degrade or sink to the bottom, plastic breaks down near the surface as a physical response to abrasion, prolonged UV exposure, and degradation from prolonged contact to water.
Having the larger pieces of plastic break into smaller chunks or pieces as a result of exposure to physical forces such as wind or waves is what creates the microplastics plaguing our oceans today.
Studies have shown that these pieces can be smaller than a third of a millimetre, and they make up as much as 60% of the floating plastic debris within the North Pacific Gyre (NPG).
But exactly how much of the plastic ends up accumulating within the centre of the gyres is not known.
Between 2016 to 2017, the Algalita Marine Research Foundation explored the South Pacific, where it collected samples from the South Pacific Subtropical Gyre, and found what they thought were high concentrations of plastic fragments, but whose quantities were not disclosed.
But they couldn't be sure these concentrations were above normal levels; they have called for more data to address what could be large errors in estimates of the amount of global plastic now found in the ocean.
Before that study, and in 2014, it was believed that the gyres only had between 200 to 600g (7 to 21 oz) worth of plastic litter per square kilometre.
The surface of these garbage gyres may be unsightly, but what happens beneath is what disturbs researchers the most
For now, the Ocean Conservancy's Baechler says: "The existing body of research indicates that other gyres may accumulate much less plastic waste compared to the NPG." For example, sampling has found the average abundance of plastics in the South Pacific Gyre to be 26,898 particles per square kilometre, and an average of 20,328 items per square kilometre in the North Atlantic subtropical gyre compared to more than 700,000 particles per square kilometre found within the NPG.

While the United Nations Environment Programme estimates between 75 to 199 million tonnes of plastic can now be found in the ocean, there is no way to be certain how much of that is making its way into the gyres, since a great percentage gets trapped close to shore.
Hardesty says the amount of plastic found in the ocean is tracking global plastic production, and says it increases by 1.5-2% each year.
"We are finding more plastic in the ocean.
And because these gyres or accumulating areas are where plastic aggregates are congregating, it's quite reasonable to see and to think and to expect that yes, we are seeing an increase in plastic in those accumulating areas as well, the major gyres," she says.

The surface of these garbage gyres may be unsightly, but what happens beneath is what disturbs researchers the most.
"One study collected surface samples of the NPG over a 22-year period (1986-2008), and found that despite the steady increase in global plastic production and disposal, the concentration of plastic debris in the NPG had not increased," says Baechler.
"This may be because floating plastic does not sit at the surface forever.
It has been found that floating plastic debris that aggregates in the gyre also sinks down through the water column into the deep sea."

As this happens, several studies now show that these plastics are entering the marine ecosystem, where they are not only being ingested, they are also being inhaled by animals including sea birds, turtles and fish.
Drifting ocean plastics which don't break down also have the ability to travel the world like the plastic bath ducks, and they have also become a way for microbes and other marine organisms to move from one area to another, inadvertently transporting species to areas where they can become alien, invasive species. 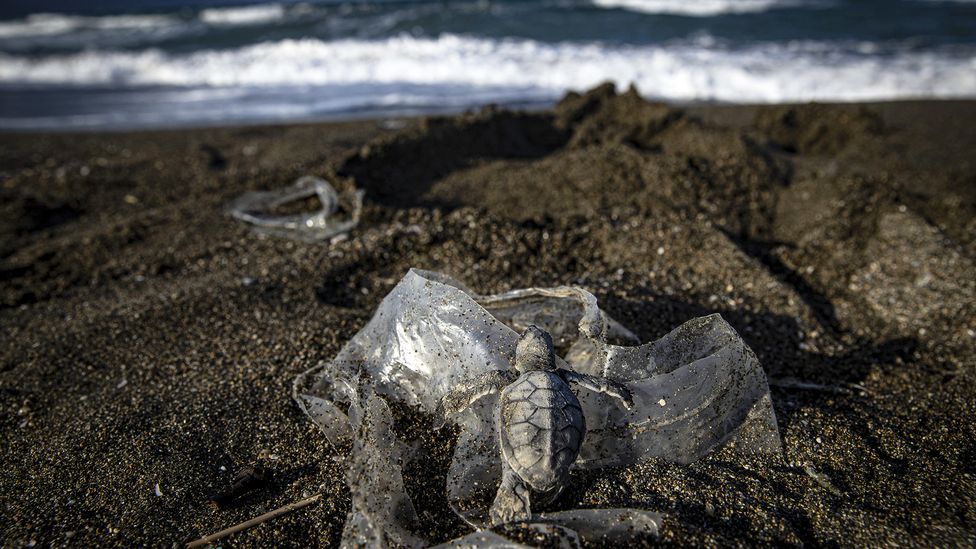 Plastic waste can be harmful to endangered sea life such as turtles
(Credit: Sebnem Coskun/Anadolu Agency/Getty Images)
Then there are the threats posed by ghost fishing nets, which can entrap marine life.
"Different types of items have disproportionate harm to wildlife.
Soft plastics are easily ingested or eaten by animals, and those things have a disproportionately negative impact on marine mammals, seabirds and turtles," Hardesty says.

"But ghost nets or derelict fishing nets are really problematic because they entangle wildlife and they keep fishing indiscriminately.
Animals swim into these ghost nets and they get stuck and then they die." And because the debris is now so closely intertwined with marine life, they are difficult to remove from the gyres.

"Cleaning up plastic waste directly from the NPG is a very difficult task.
What's more cost and time-effective is to reduce or remove waste upstream (ie at the source, on land) well before it is able to reach the ocean and enter the gyres," Baechler says.
This makes the work of Reach Penaflor and his River Warriors, as well as Baechler's organisation, Ocean Conservancy, even more critical.

Baechler adds: "Although it's difficult to directly measure how our efforts on land are impacting the amount of plastic in the open ocean and more specifically in the gyres, what we do know is that reducing plastic pollution on coastlines and land ultimately means less pollution reaching our waterways and entering the ocean."