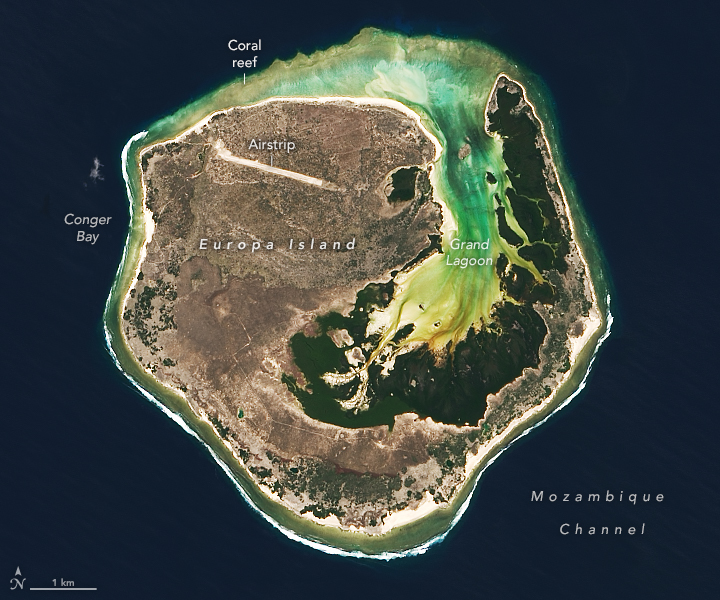 The small coralline island between Madagascar and Mozambique is a haven for nesting seabirds and green sea turtles.
From NASA
Several volcanic seamounts and hundreds of volcanic cones rise above the floor of the southern Mozambique Channel.
A few of the larger volcanic features are capped with flat expanses of carbonate that breach the water’s surface, forming low-lying coralline islands.
Europa is one such island.

Localization of Europa island in the GeoGarage platform (UKHO nautical raster map)
Europa Island is the focus of this image, acquired on April 3, 2022, with the Operational Land Imager-2 (OLI-2) on Landsat 9.
It is part of an overseas French territory that includes the Îles Éparses, or “scattered islands,” dispersed around Madagascar.
Mozambique on the African mainland lies about 500 kilometers (300 miles) to the west, and Madagascar sits about 300 kilometers (200 miles) to the east.

Europa island in the GeoGarage platform (SHOM nautical raster map)
Europa Island spans about 28 square kilometers, making it the largest of the Îles Éparses.
It was initially an atoll that became exposed at the sea surface around 90,000 years ago.
The atoll progressively filled in, and it slowly transformed into the island we know today.

A belt of nearly pristine coral reefs now hugs the coastline.
These “fringing” reefs span about 18 square kilometers, with a healthy coverage (80 percent) of live corals.
An abundance of fish, including sharks, cruise the reefs.

Another important habitat—the Grand Lagoon—cuts far into the island. Saltwater mangroves dominate the lagoon’s shoreline, while a sandy beach covers its western side.
This beach, the lagoon, and the island’s shore all support each life stage of the island’s numerous sea turtles.
Europa has been called the largest nesting site for green turtles in the Western Indian Ocean.

Vegetation across much of the island likely has not changed much since naturalists started visiting in the early 20th century.
Dry forests still grow along the oldest and highest parts of the island, where the ground is rocky. Herbaceous plants and grasses spring from the newer surfaces that rise just a few centimeters above sea level, and bushes prefer the coastal areas.
The native vegetation provides critical breeding habitat for seabirds, including the red-tailed tropicbird, the red-footed booby, and the great and lesser frigatebird.

The most obvious evidence of human activity in these images are an airstrip, built in 1973 when a military camp was established, and the nearby sisal plantation planted by a family that attempted to settle on the island in the early 1900s.
Several attempts to settle on the island since 1860 have failed, possibly because of the lack of fresh water.
Today the only human presence is the French military and the occasional visiting scientist.
Posted by geogarage at 1:04 AM