Fact Check: 99% of the World’s population gets sunlight at the same moment yesterday 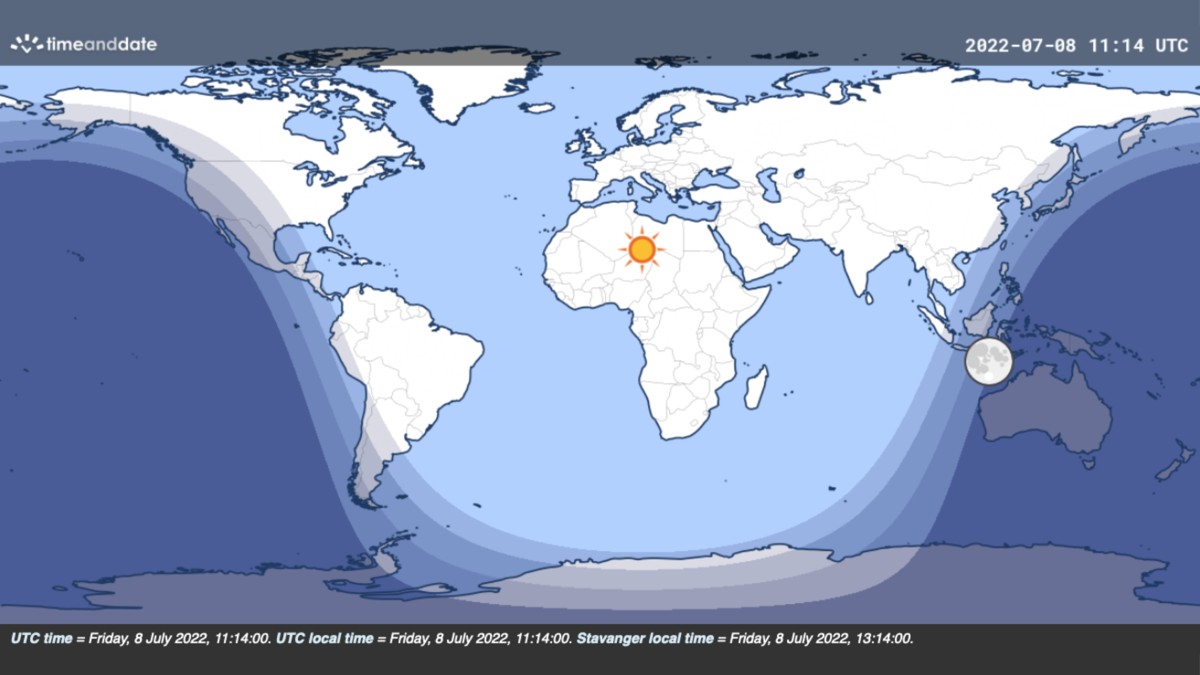 Our Day and Night World Map for July 8 at 11:15 UTC shows most of the world’s landmasses receiving sunlight.
©timeanddate.com
From Time&Date by Konstantin Bikos
A fascinating claim is circulating the internet: that there’s a moment each year when 99% of the world’s population gets sunlight.
Is it true?

As July rolls around, our number crunchers thought it was worth fact-checking a July-related claim that has been making the rounds on the internet lately.

In the original post, Reddit user GiddySwine presents a still image of our Day and Night World Map, claiming that 99% of the world’s population is between dawn and dusk on July 8 at 11:15 UTC.

A more widely circulated version claims that 99% of the population gets daylight at that moment.

A brief look at our Day and Night World Mapgives some initial support to the claims (see image above).
Nearly all of the world’s most populated areas receive some sunlight at the time in question.
Among them are North America, South America, Europe, Africa, and most of Asia.

Australia, New Zealand, parts of Southeast Asia, and Antarctica are the only larger landmasses on the night side of Earth.
7.7 Billion People Get Some Degree of Sunlight

When we run the detailed numbers through our computer, we also find some support for the claim.

Combining timeanddate’s Sun data with 2022 population data from the Center for International Earth Science Information Network at Columbia University, we found that it’s nighttime for just under 80 million people on July 8 at 11:15 UTC.

That leaves about 7.7 billion people—roughly 99% of us—on the side of the planet illuminated by the Sun.

Over 6.4 billion of them are in the daytime, while more than 1.2 billion people experience twilight. 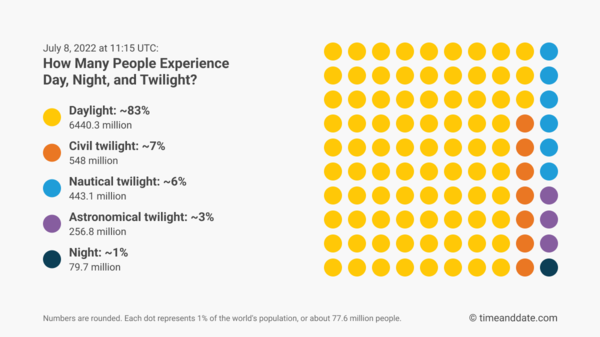 ©timeanddate
So, with 83% of us getting direct sunlight and another 16% getting indirect sunlight, the claims are, in one way, correct.
And, before we go any further, let us say that this alone is a fascinating fact and a great find!

That said, there’s a hitch: a few hundred million people on the supposedly sunlit side of Earth will think it’s night.
Pitch-Black Twilight Sky

This is especially true for those who reside on the outermost edge of the twilight zones, within the darkest twilight phase called astronomical twilight.
Here, the Sun is 12-18 degrees below the horizon.
At that angle, the indirect sunlight becomes so thin that it is usually indiscernible to the naked eye.

The trace amounts of light in the otherwise pitch-black sky are of concern only in very particular contexts.
For example, it can hinder astronomers from observing the faintest celestial objects—hence the name of this twilight phase.

Astronomical twilight or nighttime?
When the Sun is 12-18 degrees below the horizon, the naked eye usually fails to discern the trace amounts of indirect sunlight in the sky.
©iStock.com/photographer3431
Hundreds of Millions Will Think It’s Night

So, 256.8 million people, about 3% of the world’s population, are so far behind the curve that no sunlight is visible.

Moreover, many people in the slightly brighter nautical twilight zone will fail to notice any daylight. Especially in urban areas, whose residents make up a majority of the total population numbers, light pollution can blend out the faint glow of the Sun, which is 6-12 degrees below the horizon at that point.
Claim Confirmed, But…

So, the claim is technically true if you count all twilight areas, no matter how dimly lit.

It’s still a very high number. But the wording of the more recent versions of the post, claiming that 99% of the population will “experience daylight,” is somewhat misleading.
Why July 8 and Not the June Solstice?

When doing this fact check, one thing caught our attention: the date.

By far, most people reside in the Northern Hemisphere.
The June solstice, when the northern half of the globe receives the most sunlight, falls on or around June 21.
Doesn’t that mean even more people get sunlight on the day of the June solstice than on July 8?

Well, yes and no. As before, it depends on if you account for human perception or simply follow the technical definitions of the twilight phases.
July 8: Most People in Daytime or Twilight

Following the technical approach, July 8 is indeed a better date than June 21. As the Sun slowly makes its way south after the solstice, its rays gradually retreat from northern areas. However, at 11:15 UTC, this change affects only largely unpopulated areas, such as the northern Pacific Ocean.

At the same time, the Sun’s southward movement extends its reach farther south, for example, in Indonesia and the Philippines. Although the change is tiny in geographical terms, it covers some of the world’s most densely populated areasand adds about 10 million people to the twilight and daylight zones.
Comparing June 21 and July 8

Interestingly, while more people are on the night side of Earth at 11:15 UTC on the solstice than on July 8, the number of people experiencing civil twilight—the brightest twilight phase—is also considerably larger: 575.9 million people on June 21 and 548.0 million people on July 8.

So, of the people in the twilight zones, a larger percentage experience discernible twilight on June 21.

If we again discount the astronomical twilight zone and half of the nautical twilight zone, the total number of people actually noticing sunlight increases to 7218.8 million—nearly 14 million more than the 7204.9 million people doing so on July 8.
11:15 UTC Is the Perfect Moment

Whichever definition you use, the day-to-day difference is relatively small during this time of the year.

However, one fact remains undisputed: 11:15 UTC is indeed the perfect momenteach day when dawn begins on the North American west coast while dusk still reigns in East and Southeast Asia.
Get Ready for the Instant of Global Sunlight

If you want to mark the moment when most of humanity is bathed in sunlight, you can see the seconds tick down with our countdown.

And while you bask in the Sun, please spare a thought for our friends Down Under who are among the 1% experiencing actual nighttime at that moment—irrespectively of definitions and technicalities.