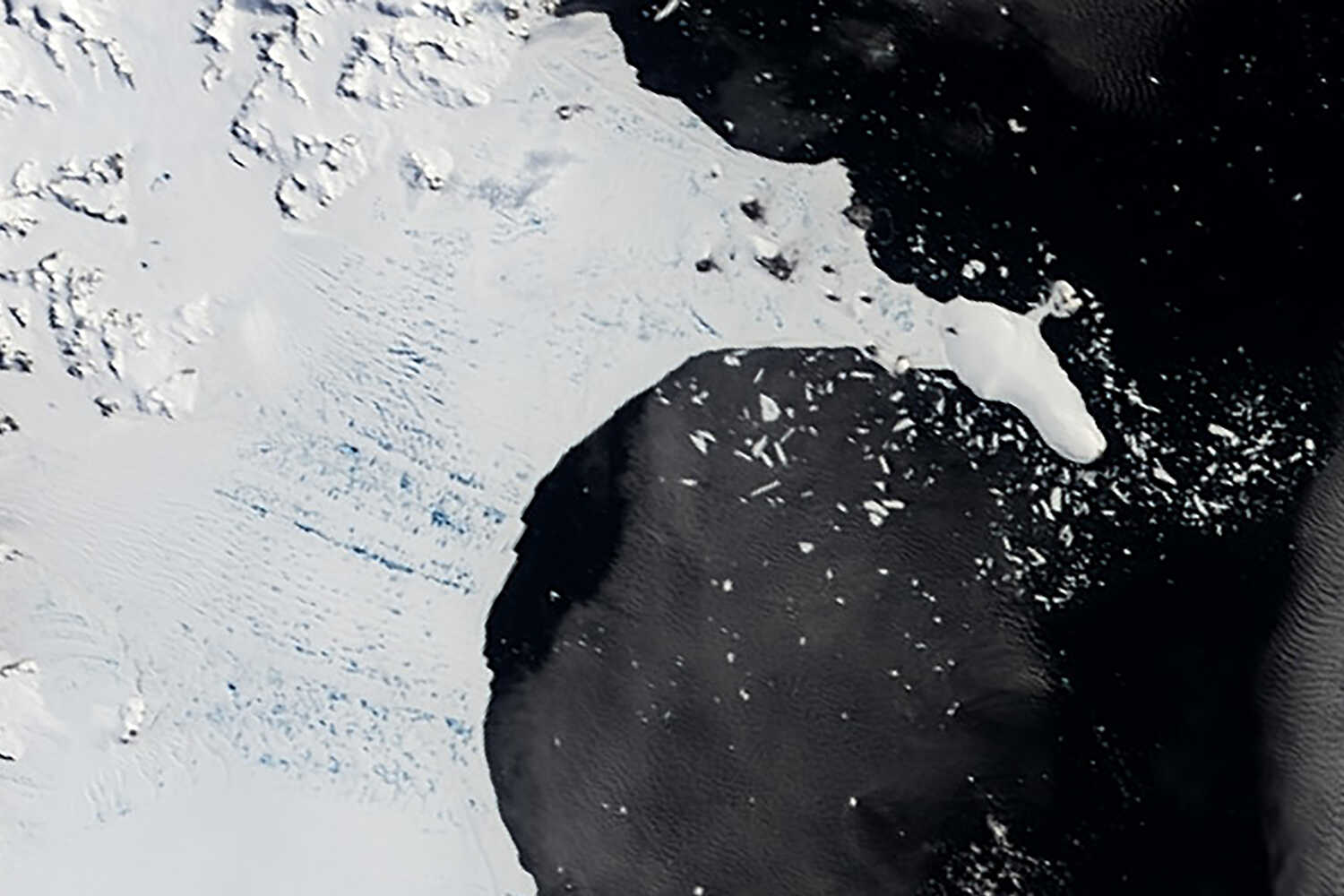 Satellite images showed the Larsen B Ice Shelf splintering and collapsing from Jan. 31 to April 13, 2002.
Credit...NASA Earth Observatory
From NYTimes by Henry Fountain
The collapse of the two ice shelves was most likely triggered by vast plumes of warm air from the Pacific, researchers have found.

The rapid collapses of two ice shelves on the Antarctic Peninsula over the last quarter-century were most likely triggered by the arrival of huge plumes of warm, moisture-laden air that created extreme conditions and destabilized the ice, researchers said Thursday.

The disintegration of the Larsen A shelf in 1995 and of the Larsen B shelf in 2002 were preceded by landfall of these plumes, called atmospheric rivers, from the Pacific Ocean.
They generated extremely warm temperatures over several days that caused surface melting of the ice that led to fracturing, and reduced sea ice cover, allowing ocean swells to flex the ice shelves and further weaken them.

“We identify atmospheric rivers as a mechanism that can create extreme conditions over the ice shelves of the Antarctic Peninsula and potentially lead to their destabilization,” said Jonathan Wille, a climatologist and meteorologist at the Université Grenoble Alpes in France and the lead author of a study describing the research in the journal Communications Earth and Environment.

While there have been no collapses on the peninsula since 2002, Dr. Wille and his colleagues found that atmospheric rivers also triggered 13 of 21 large iceberg-calving events from 2000 to 2020.

Dr. Wille said the larger Larsen C shelf, which is still mostly intact and, at about 17,000 square miles, is the fourth-largest ice shelf in Antarctica, could eventually suffer the same fate as A and B.
“The only reason why melting has not been significant so far is because it’s just farther south compared to the others, therefore colder,” he said.
But as the world continues to warm, atmospheric rivers are expected to become more intense.
“The Larsen C will now be at risk from the same processes,” he said. 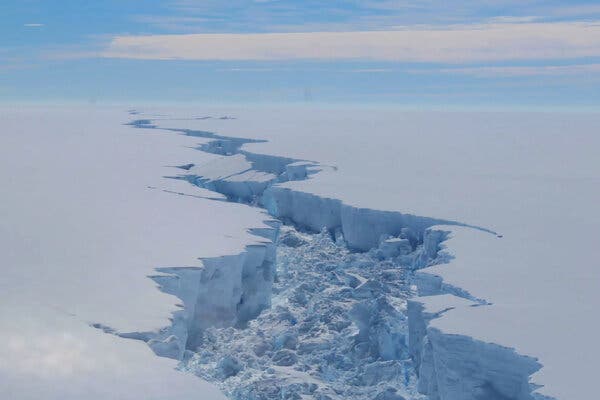 A rift in the Larsen C Ice Shelf in February 2017. Scientists say the C ice shelf could meet the same fate as A and B.
Credit...British Antarctic Survey, via Agence France-Presse — Getty Images
Kyle R. Clem, a researcher at Victoria University of Wellington in New Zealand who was not involved in the study, said the work also showed that other parts of Antarctica that are not warming as fast as the peninsula could eventually be susceptible as well, since the mechanism that the researchers documented is more dependent on warming where the atmospheric river originates.

“The amount of heat and moisture that atmospheric rivers transport is higher than it would be without global warming,” Dr. Clem said.
“So the air mass that slams into Antarctica is much, much warmer. And it’s these episodes of extreme events that lead to ice shelf collapse.”
“You could get this anywhere in Antarctica,” he said.

Shelves are floating tongues of ice that serve to hold back most of the ice that covers Antarctica to depths up to nearly 3 miles.
When a shelf collapses, the flow of this land ice to the ocean accelerates, increasing the rate of sea level rise.

While the Antarctic Peninsula ice sheet is relatively small (if it all melted, seas would rise by less than a foot) the collapse of ice shelves elsewhere on the continent could lead to much greater sea level rise over centuries.

A mystery solved.
Researchers have established that the collapses of two ice shelves on the Antarctic Peninsula over the last quarter-century were most likely triggered by vast plumes of warm air from the Pacific.
As the world continues to warm, such plumes are expected to become more intense.

A prickly plant in danger.
A new study estimates that, by midcentury, global warming could put 60 percent of cactus species at greater risk of extinction.
Poaching, habitat destruction and other threats already make cactuses among the most endangered groups of organisms.

Hurricanes.
A new study found that climate change contributed significantly to the severity of the 2020 Atlantic hurricane season, the most active on record.
The most extreme three-hour rainfall rates were 10 percent higher than they would have been without climate change.

Methane emissions
Levels of methane in the atmosphere increased last year by the largest amount since measurements began four decades ago, according to analysis by the National Oceanic and Atmospheric Administration, adding to concerns about this planet-warming gas.

Last month, a small ice shelf collapsed in East Antarctica, which is considered the most stable part of the continent. In the days before, an intense atmospheric river arrived in the region.
It led to record high temperatures, but researchers are not yet certain how much of a role it played, if any, in the shelf’s disintegration.

Atmospheric rivers occur when a large stationary zone of high-pressure air meets a low-pressure storm system.
A narrow stream of moist air flows from the confluence of the two.

In a typical Southern Hemisphere summer, the peninsula gets from one to five of these events, the researchers said.
They looked at only the ones that contained the highest volume of water vapor.

If a river is intense enough, it can lead to several days of surface melting of the ice shelf.
As the meltwater flows into crevices it refreezes, expanding and widening the cracks.
Eventually such repeated hydrofracturing, as the process is called, can cause the ice shelf to disintegrate.

The atmospheric river can also spur the process by melting sea ice, or if its associated winds push the sea ice away from the shelf.
That allows ocean waves to rock the ice shelf, further stressing it.

Some large ice shelves in West Antarctica are thinning as a result of melting from underneath by warm ocean water. Catherine Walker, a glaciologist at the Woods Hole Oceanographic Institution in Massachusetts who was not involved in the study, said that regardless of the long-term trends of warming and thinning, “this paper brings up the important point that very brief weather events can push an ice shelf past its tipping point.”
Links :
Posted by geogarage at 1:49 AM