After visiting both ends of the Earth, I realized how much trouble we’re in 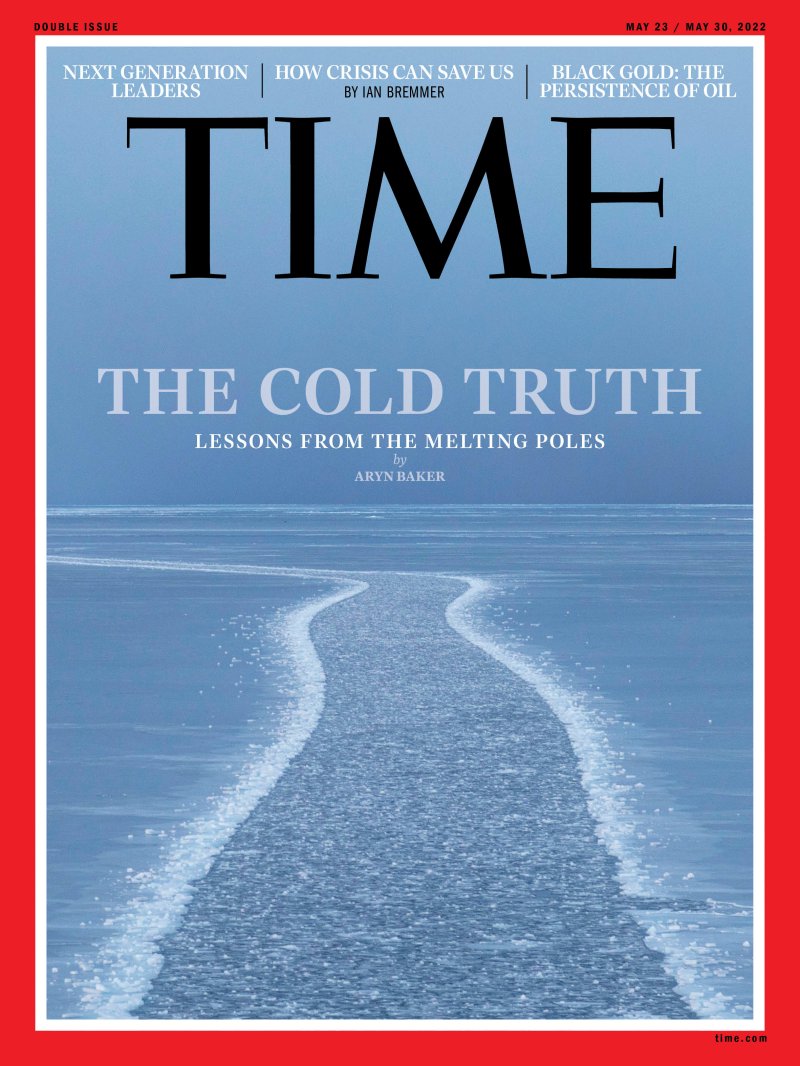 Photograph by Acacia Johnson
From Time by Aryn Baker 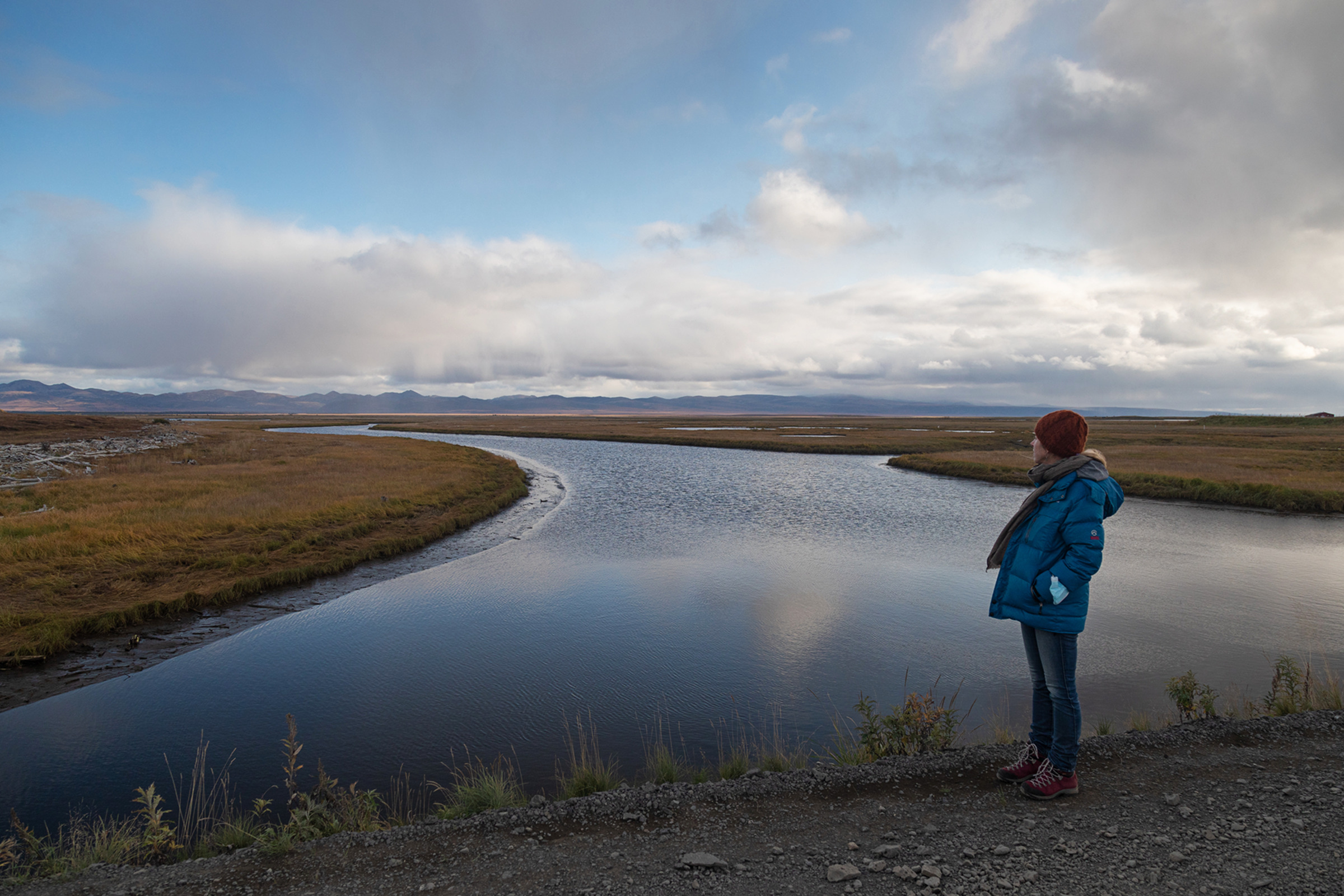 Baker on the banks of Alaska’s Unalakleet River on Sept. 17, 2021.
Acacia Johnson
Nothing on earth compares to the icy sweeps of the planet’s polar extremes.
It’s why, perhaps, explorers and scientists who have been there often seek more distant analogies, describing the poles’ austere swaths of frozen terrain in lunar terms, unworldly with their slimmed-down palettes of white, black, and icy blues.
Home only to the most exquisitely adapted organisms, the Arctic and Antarctic are largely lethal to humankind, unforgiving with their dark winters, harsh winds, and violent cold.
Yet these remote, inhospitable places have more impact on our lives than almost anything closer to home.
The poles regulate our climate, our weather patterns, and even our maritime food supply.
And they are warming faster than anywhere else on earth, with untold consequences for those who live at the planet’s more accommodating latitudes.

I saw this firsthand on Feb. 6, 2020, when Antarctica logged its hottest temperature on record—18.3°C (64.9°F)—at Argentina’s Esperanza weather station.
I was on nearby Anvers Island, accompanying a team of ornithologists from New York’s Stony Brook University conducting a census of the region’s chinstrap penguin population.
Members of the expedition relished the balmy weather, stripping down to T-shirts, but it was an ominous sign for the species they were there to document.

Penguins aren’t just adorable icons of Antarctica.
They’re a sentinel species—an animal whose behaviors can tell scientists if something is going wrong in a particular environment.
Chinstraps feed mainly on krill, tiny crustaceans that are the foundation of the marine food chain.
Almost every animal in the ocean eats either krill or something else that eats krill, all the way up to the tuna that ends up on our dinner tables.
Krill feed on the algae and phytoplankton that cling to the underside of ocean ice.
As global temperatures rise because of increased carbon emissions, sea ice is declining.
It would be impossible to survey the health of the world’s krill populations, but if chinstraps aren’t doing well, it’s likely that krill, and everything that eats krill, aren’t doing well either.
And our carbon canaries are not doing well.
The Stony Brook researchers found that most of the chinstrap colonies had declined over the past 50 years, some by half and others by up to 77%.

We can wring our hands over the looming loss of a charismatic species, but “Save the Penguins: Use Solar” doesn’t go far enough as a slogan.
It doesn’t fully encompass what the loss of this penguin species portends for the future of humanity on this planet.
Climate change moves so slowly as to feel almost imperceptible to us—what difference, after all, does a fraction of a single degree make on our day-to-day lives?—but lay that trajectory over something more fragile and less resilient like the chinstraps, and it quickly becomes clear the domino effect of climate change is already starting to reach uncomfortably close to home.

Or at least it should.
There is an incomprehensible disconnect between what climate science says must be done—an immediate shift in how we produce energy, travel, and eat—and what we, and our leaders, are willing to do.
At what point does the distant threat of ecological collapse assume the fierce urgency of now?
When the sea ice is entirely gone?
When the penguins are?

By then it will be too late. 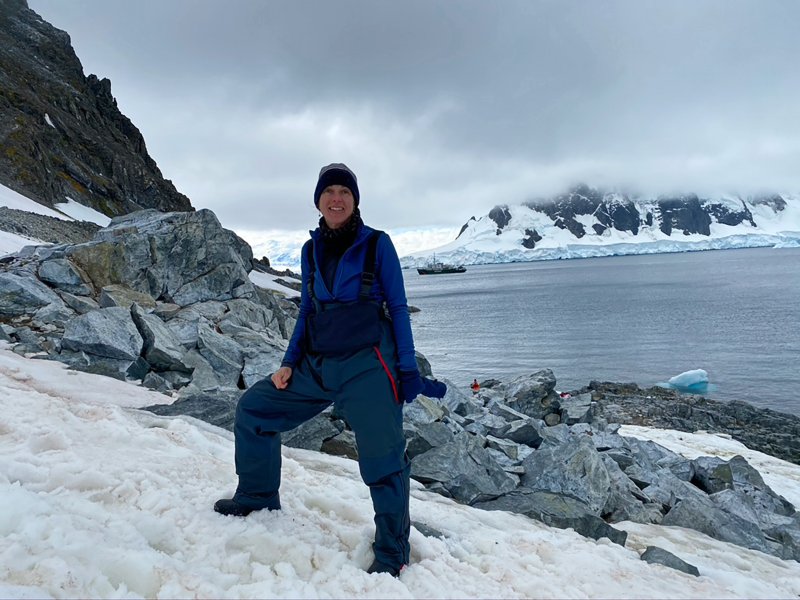 Baker in Orne Harbor, Antarctica, on Feb.7, 2020.
Courtesy Photo
The Arctic is nearing that tipping point.
Nearly five months after Antarctica’s high temperature record, the Siberian city of Verkhoyansk reached a searing historical high of 38°C (100.4°F) on June 20, 2020, heralding a summer of extreme heat and wildfires in a region better known for ice storms.
Overall, 2020 marked the hottest year on record for both poles, and both the Arctic and the Antarctic saw precipitous declines in sea ice.
When there isn’t enough ice to reflect the sun’s rays back into space, that heat is absorbed by the dark ocean, accelerating rising water temperatures and ice melt, altering ocean currents, weakening the jet stream, and changing wind patterns.
The effects ripple through the global ecosystem, manifesting in greater drought, heat, floods, and storms.
“What happens in the Arctic doesn’t stay in the Arctic,” Admiral Karl L. Schultz, commandant of the U.S. Coast Guard, told me on a September 2021 visit to the Canadian Arctic outpost of Resolute.
Hurricane Ida had just ripped through the Caribbean and parts of the U.S., killing 107 from Venezuela to Connecticut and costing more than $75 billion in damage.
While Resolute seemed worlds away from the destruction left in Ida’s wake, the two were opposite sides of the same coin, Schultz said.
Ida was a tropical storm that exploded into a hurricane with little warning—the kind of rapid intensification caused by a warming Arctic, and a harbinger of more to come.

What happens at the top of the planet matters to everyone on earth.
But it matters most to those who live there.
A lack of sea ice exposes vulnerable shorelines to rapid erosion, forcing indigenous villages that have lived in harmony with the Arctic’s extremes for centuries to relocate inland.
Hunting for seal, walrus, and polar bear—a mainstay of native Arctic traditions and subsistence survival—is not possible without winter’s thick slabs of ice.
For many communities on the edge, the loss of sea ice spells cultural disruption as well as dislocation in a preview of what global warming, if left unchecked, will eventually bring to the rest of the world.

A few weeks after leaving Resolute, I traveled to the village of Unalakleet on Alaska’s northwest coast to meet Laureli Ivanoff, an Inupiaq climate activist.
Ivanoff’s home freezer was full of the wealth of Arctic Alaska’s short summer season: berries and tundra greens, wild rhubarb, salmon caviar, caribou fat, and bear meat.
The one thing she doesn’t have is the food that sustained her culture for generations: ugruk, or bearded seal.
When a seal is harvested, every part of the animal is used, from the fat to the skin and the intestines.
It anchors the hunter in a community ritual of sharing and respect for nature.
When Ivanoff was a child, ice formed in the early fall and stayed deep into spring—these days she wonders if she will see ice at all in coming years.

“Colonization and assimilation have taken away so much,” Ivanoff told me—including language, dancing, and ceremonies that bound the community together.
All that is left is the native food traditions.
“And now climate change is taking even that.”
She watched her 3-year-old son play on the floor as he took a toy boat on an imaginary ugruk hunt.
“How much of his culture will he get to keep?”

A fundamental part of human nature is to want to pass something on to the next generation that symbolizes our values, be it a cultural tradition or material goods earned over a lifetime of labor.
If my daughter inherits a damaged planet, racked by heat waves, befouled with a plastic tide, and witness to waves of climate migrants fleeing uninhabitable lands, what does that say about the values my generation cultivated in its dogged pursuit of perpetual growth?
The science is clear: to prevent climate devastation we must cut greenhouse emissions nearly in half by 2030 compared with 2010 levels.
That means real sacrifice in the short term, especially for those of us lucky enough to live in highly developed parts of the world.
At this point, prioritizing the climate offers a stronger guarantee for the future than continuing to accumulate wealth the way we have been.

I came away from both poles with a mounting sense of frustration over a global unwillingness to act in the face of certain doom, as well as fear.
A warming Arctic is not just a warning.
It has the potential to take us with it in its demise.
Permafrost, the layer of permanently frozen ground that undergirds both poles, is a carbon bomb waiting to go off.
As the soil thaws it releases greenhouse gases, warming the region further and setting off a perpetual feedback loop.
Scientists don’t yet know if Arctic emissions are on par with a small developing nation, or, more likely, another China.
(The South Pole’s permafrost is trapped under the Antarctic ice sheet.
If that melts away, we have bigger things to worry about, like a 200-ft. sea-level rise).

We tend to think of the earth’s polar regions as victims of our own carbon profligacy.
But if we push them past the tipping point, they will become perpetrators.
Our polar regions protect life as we know it only as much as we protect them.
It’s worth sacrificing a little bit more to ensure we leave a better world behind.