For 13 thousand dollars, Englishman Brandon Grimshaw bought a tiny uninhabited island in the Seychelles and moved there forever.
When the Englishman Brandon Grimshaw was under forty, he quit his job as a newspaper editor and started a new life.
By this time, no human had set foot on the island for 50 years.
As befits a real Robinson, Brandon found himself a companion from among the natives.
His Friday name was René Lafortin. Together with Rene, Brandon began to equip his new home.
While René came to the island only occasionally, Brandon lived on it for decades, never leaving.
By oneself.
For 39 years, Grimshaw and Lafortin planted 16 thousand trees with their own hands and built almost 5 kilometers of paths.
In 2007, Rene Lafortin died, and Brandon was left all alone on the island.
He was 81 years old.
He attracted 2,000 new bird species to the island and introduced more than a hundred giant tortoises, which in the rest of the world (including the Seychelles) were already on the verge of extinction.
Thanks to Grimshaw's efforts, the once deserted island now hosts two-thirds of the Seychelles' fauna.
An abandoned piece of land has turned into a real paradise.
A few years ago, the prince of Saudi Arabia offered Brandon Grimshaw $50 million for the island, but Robinson refused.
“I don’t want the island to become a favorite vacation spot for the rich. Better let it be a national park that everyone can enjoy.”
And he achieved that in 2008 the island was indeed declared a national park.
Credit Drew Snider
From BBC by Antony Ham

Once a neglected wasteland, this paradisiacal eco-reserve stands as a reminder of what the Seychelles were like before tourism arrived.

Most people who buy their very own tropical island do so in the pursuit of luxury.
Brendon Grimshaw was different.
So, too, was Moyenne, the island in the Seychelles that Grimshaw bought. 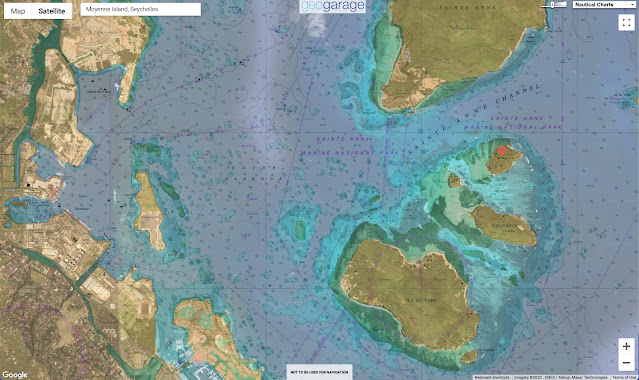 Localization in the Saint Anne Marine National Park in Seychelles with the GeoGarage platform (UKHO map)
Grimshaw first came to the Seychelles – an archipelago of 115 islands in the Indian Ocean, only eight of which are permanently inhabited – on holiday in 1962.
At the time, he was an editor working for some of the biggest newspapers in East Africa.
It was an exciting time in Africa and, as part of his job, he rubbed shoulders with Tanzania's charismatic new leader and future president, Julius Nyerere.

But Grimshaw was looking for something more than a holiday.

Tanzania had declared independence the year before; Kenya would follow a year later; and Grimshaw, an Englishman, understood that jobs such as his would soon pass to locals.
Knowing that he would soon be unemployed, Grimshaw searched for a new direction in life, one that took him closer to nature.
He dreamed about owning land in the Seychelles – ideally, he'd buy his own island. 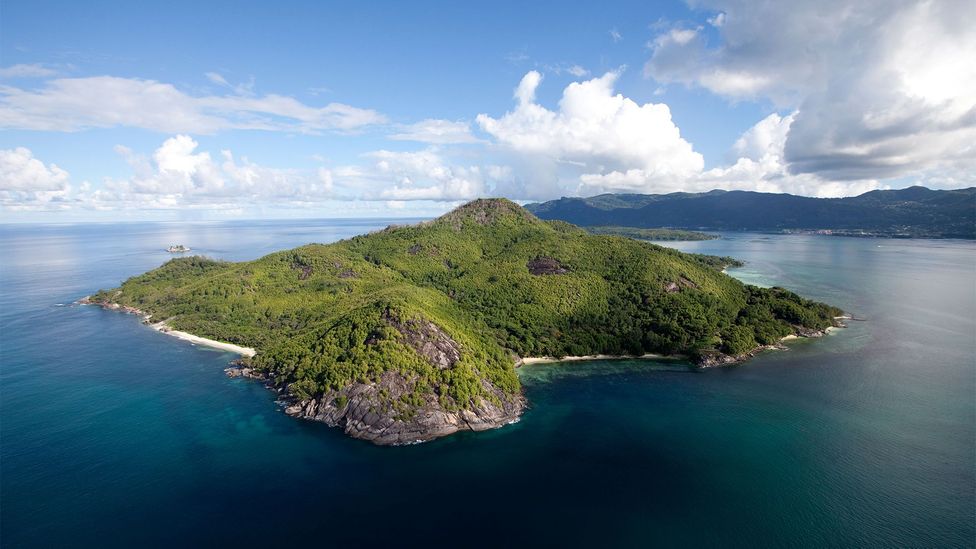 Moyenne is a 0.099sq km dot off the coast of the Seychelles' largest island, Mahé
(Credit: image BROKER/Alamy)
On his first few weeks in the Seychelles, Grimshaw began to wonder whether he needed a change of plan: there weren't many islands on the market, and those that were had eye-watering price tags.
On the second-to-last day of his holiday, a young man approached him in the Seychelles' capital, Victoria, and asked Grimshaw if he wanted to buy an island.
Just like that.
They travelled together to Moyenne, a 0.099sq km dot 4.5km off the north coast of the Seychelles' largest island, Mahé.
Grimshaw fell in love immediately with its silence and its wild tangle of vegetation.
It was, he would later say, close enough to be accessible from the Seychelles' main island, and yet a world away.

"It was totally different. It was a special feeling," he told a documentary film crew in 2009.
"This is the place I'd been looking for."

At four minutes to midnight on the last day of his Seychelles holiday, Grimshaw signed an agreement to pay £8,000 for Moyenne.
The island was his.
But buying Moyenne would prove an easier task than taking care of it.

Save for a family of fisherfolk who lived on the island, Moyenne had been abandoned for decades.
With tourism starting to take off in the Seychelles, it seemed only a matter of time before someone cleared the land to build a five-star resort. 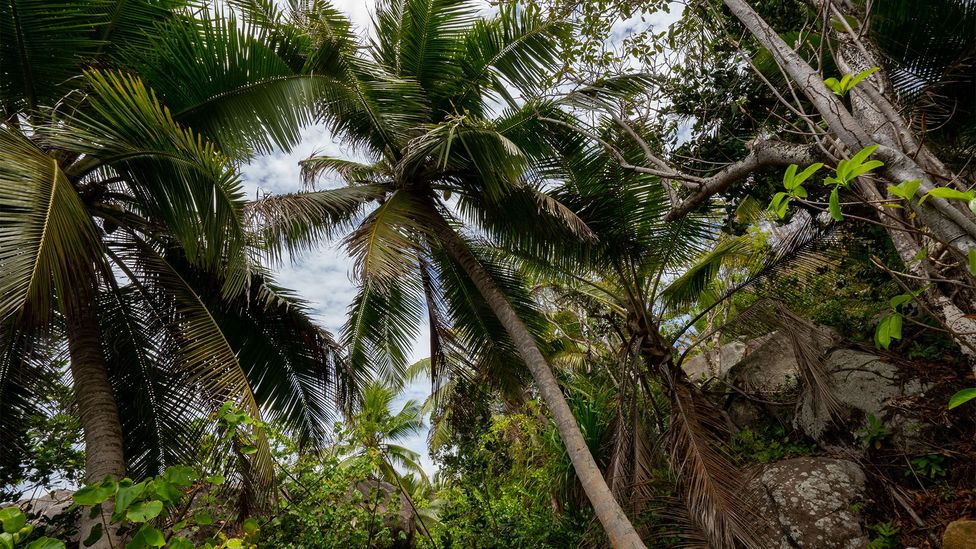 Moyenne was once so overgrown that falling coconuts never hit the ground
(Credit: PhotoStock-Israel/Alamy)
Moyenne is one of the smallest of the Seychelles' inner islands: it measures just 0.4km long and barely 0.3km wide, and its coastline runs for less than 2km.
Its highest point rises to an altitude of just 61m above the water's edge.
Moyenne possesses the same paradisical white sand and granite boulders that characterise so many Seychelles shorelines, but it's also home to a dense, unbroken wall of trees that cover the island, forming a low pyramid above the water's edge.
It's a riot of green against cobalt skies and a sapphire sea, like a tiny rainforest erupting from the ocean.

Despite Moyenne's diminutive size, restoring the island's natural beauty was a massive task.
A combination of neglect and heavy-handed human intervention had left Moyenne dishevelled and gasping for air.
Weeds choked the understorey, and the island was so overgrown that, it was said, falling coconuts never hit the ground.
In the tangle of weeds, birds were noticeably absent and rats foraged in the undergrowth.

By Grimshaw's side was a local named Rene Antoine Lafortune, the 19-year-old son of a local fisherman.
The two became inseparable, and together they set about transforming the island, clearing the scrub, planting trees and forging paths through the undergrowth.
It was painstaking, back-breaking work – and it became Grimshaw's life-long obsession.

Grimshaw's initial goal was to protect Moyenne from overdevelopment.
At first, this meant uncovering the island's raw beauty and building a humble island home where he could live out his days.
But his longer-term dream was to create a natural paradise that would outlive him and remain protected long after he was gone. 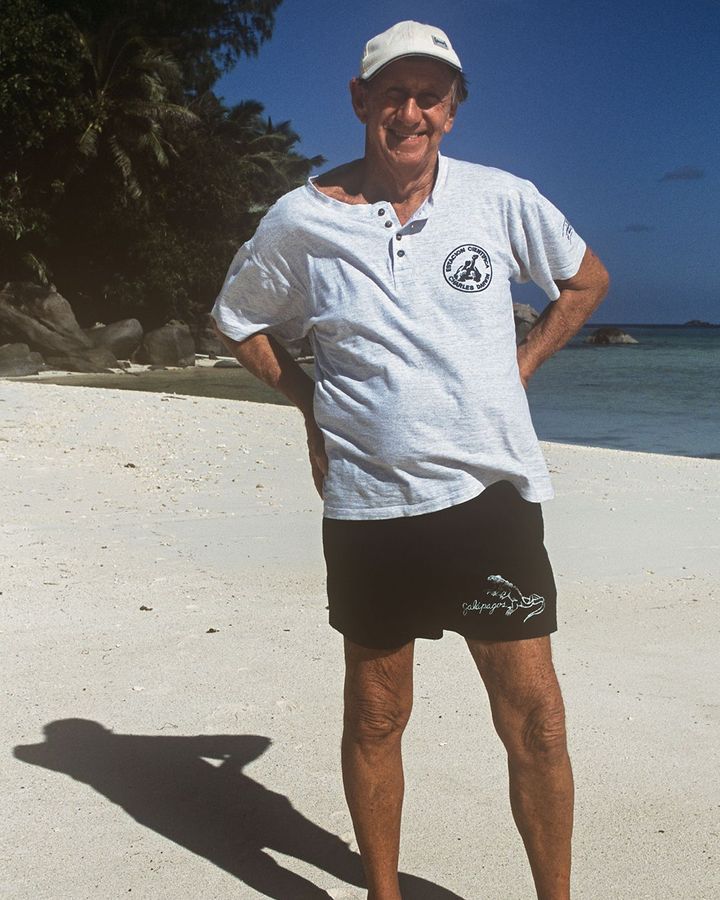 Grimshaw was a former newspaper editor-turned-conservationist
(Credit: Marion Kaplan/Alamy)
"His vision was to leave an unspoiled island for future generations of Seychellois and the world," said Suketu Patel, who first met Grimshaw in 1976 and became a lifelong friend.
"He wanted a mini-Seychelles.
He wanted to try and replicate what Seychelles and its islands were like before tourists came."

It wasn't all hard work, though.
While taming the overgrown north-western corner of Moyenne, Grimshaw found two graves.
Their tombstones read, "Unhappily Unknown".
Grimshaw became convinced that pirates from centuries past were buried here; one of the beaches on the island's north side is known as Pirate's Cove.
The graves belonged to a pair of lowly buccaneers, so the story went, who were killed by two famous pirate leaders so that the dead men's spirits would haunt the island and protect the treasure.

Whether Grimshaw really believed the legends is unknown.
"For him it was fun to get up in the morning, ask, 'What will I do today? Let's go look for treasure'," remembered Patel.
Today, there are two sites marked on maps of Moyenne with a skull-and-crossbones symbol, where Grimshaw and Lafortune tried their luck looking for, but never finding, the pirates' hidden treasure.

As tourism in the Seychelles grew in the 1980s and the archipelago became synonymous with a tropical island paradise, investors turned their covetous gaze towards Moyenne.
Grimshaw received offers of up to $50m to sell the island.
He resisted every overture. 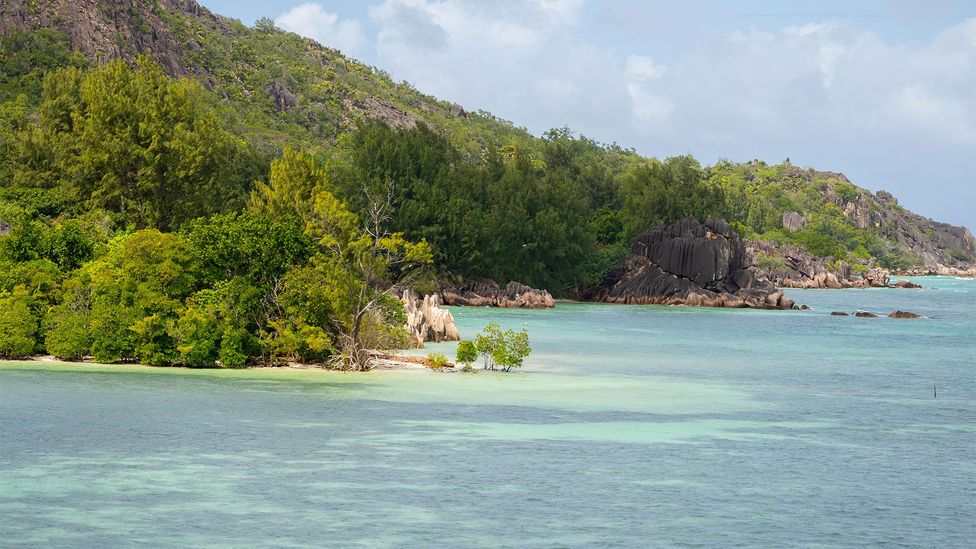 Moyenne is like a tiny rainforest erupting from the ocean
(Credit: PhotoStock-Israel/Alamy)
As Grimshaw grew older, he became increasingly aware that he had limited time left to protect the island's future.
He had no children to whom he could pass on custodianship of the island, and when Lafortune passed away in 2007, Grimshaw decided to act.
With Patel and others, he set up a perpetual trust to protect the island and signed an 2009 agreement with the Seychelles' Ministry of Environment that included Moyenne as part of Ste Anne Marine Park, but granted it its own special status.
With that, Moyenne Island National Park, the world's smallest national park, was born.

It can be easy to imagine Grimshaw as an eccentric figure.
After all, he moved alone to the other side of the world, bought an island, believed in pirates and spent a lifetime restoring a seemingly inconsequential speck of land.
But many Seychellois remain grateful for what he bequeathed to his adopted nation. 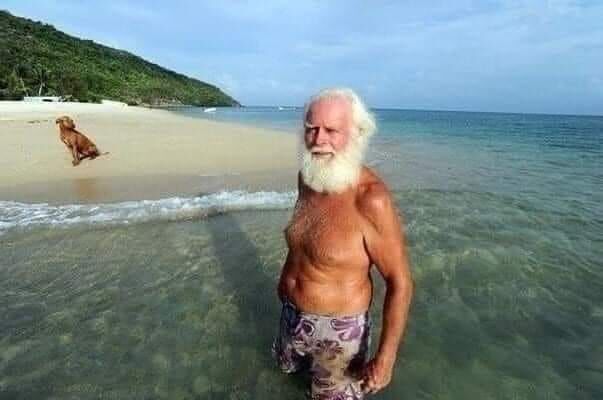 "Personally, I don't think he was crazy," said Isabelle Ravinia from the Seychelles National Parks Authority.
"He gave the island back to the country, which was a noble thing to do. Normally people would try to sell off the island before they die so they can obtain money to do something else. Instead, he did something incredible."

Grimshaw died in 2012 and his grave sits alongside that of his father (who later came to live with Grimshaw) and the two unknown pirates.
At his request, Grimshaw's tombstone reads, "Moyenne taught him to open his eyes to the beauty around him and say thank you to God."
In his last will and testament, he expressed his final wishes: "Moyenne Island is to be maintained as a venue for prayer, peace, tranquillity, relaxation and knowledge for Seychellois and visitors from overseas of all nationalities, colours and creeds." 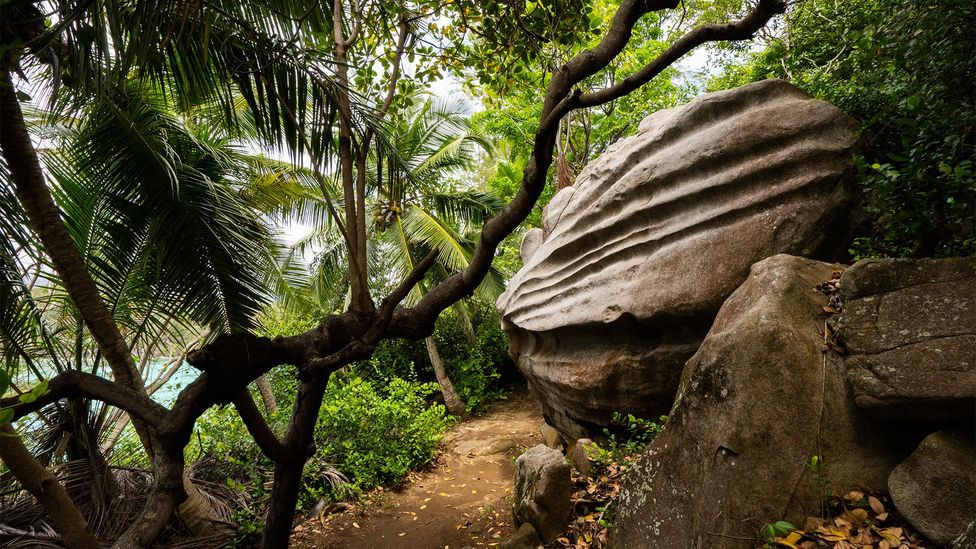 Thanks to Grimshaw and Lafortune's work, Moyenne is crisscrossed by nature trails today
(Credit: PhotoStock-Israel/Alamy)
The task of fulfilling Grimshaw's wishes now lies in the hands of the Moyenne Island Foundation, which is overseen by Patel.
Apart from a restaurant – the Jolly Roger – that serves local dishes like grilled fish and seafood curries in a red Creole sauce, a small museum dedicated to Grimshaw's life and two nurseries for giant tortoise hatchlings, Moyenne remains undeveloped.
How to visit Moyenne

Aside from hiring your own boat, the best way to explore Moyenne is on a half- or full-day tour with Creole Travel Services and Mason's Travel, which also take in the other islands of the Ste Anne Park.

The island has no jetty and arriving here carries a special kind of magic: nowhere else in the Seychelles can match Moyenne's sense of deserted-island discovery as you wade ashore, barefoot, through the shallows.
As you reach dry land and take your first steps along the gently climbing forest trail, the trees close in behind you and you enter another world.
Dappled sunlight filters down through the canopy to the forest floor, the temperature is cooler, and the island's 16,000 trees – mahogany, palm, mango, pawpaw – planted by Grimshaw and Lafortune surround you.
By one estimate, Moyenne has more plant species per sq m than any other national park in the world.

Every now and then, you may find your path blocked by one of Moyenne's nearly 50 free-range giant Aldabra tortoises.
They're in no hurry, and nor should you be as you watch them pass.
Back in the shallows and by the beaches at Pirate’s Cove, watch for hawksbill turtles that often come ashore to nest. 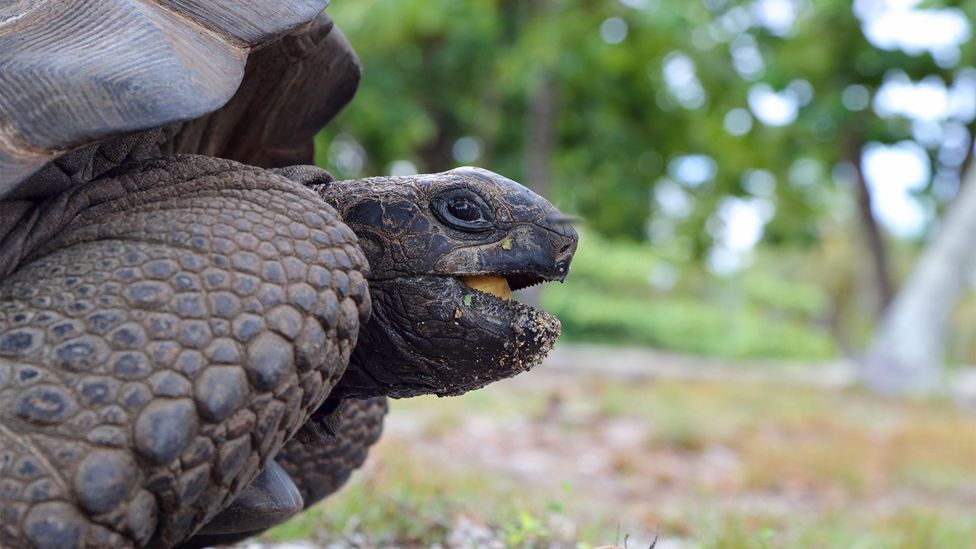 Fifty free-range giant Aldabra tortoises roam Moyenne
(Credit: Kit Day/Alamy)
Even during peak tourist season, there are rarely more than 50 visitors on the island at any one time, and never more than 300 over the course of a day.
Six islands make up the Ste Anne Marine Park, but Moyenne is the only one, aside from tiny Ile Cachee, with no hotel development or other forms of private land ownership.
And thanks to Grimshaw and his friends, Moyenne is likely to stay this way.

"There's something that grabs you when you go there," said Patel.
"If you think you have a big problem, when you're on the island you realise that it's not a problem after all.
Moyenne is what life should be like."
Links :
Posted by geogarage at 1:03 AM