Meet MAPLE, the brain that will run the UK’s autonomous naval fleet 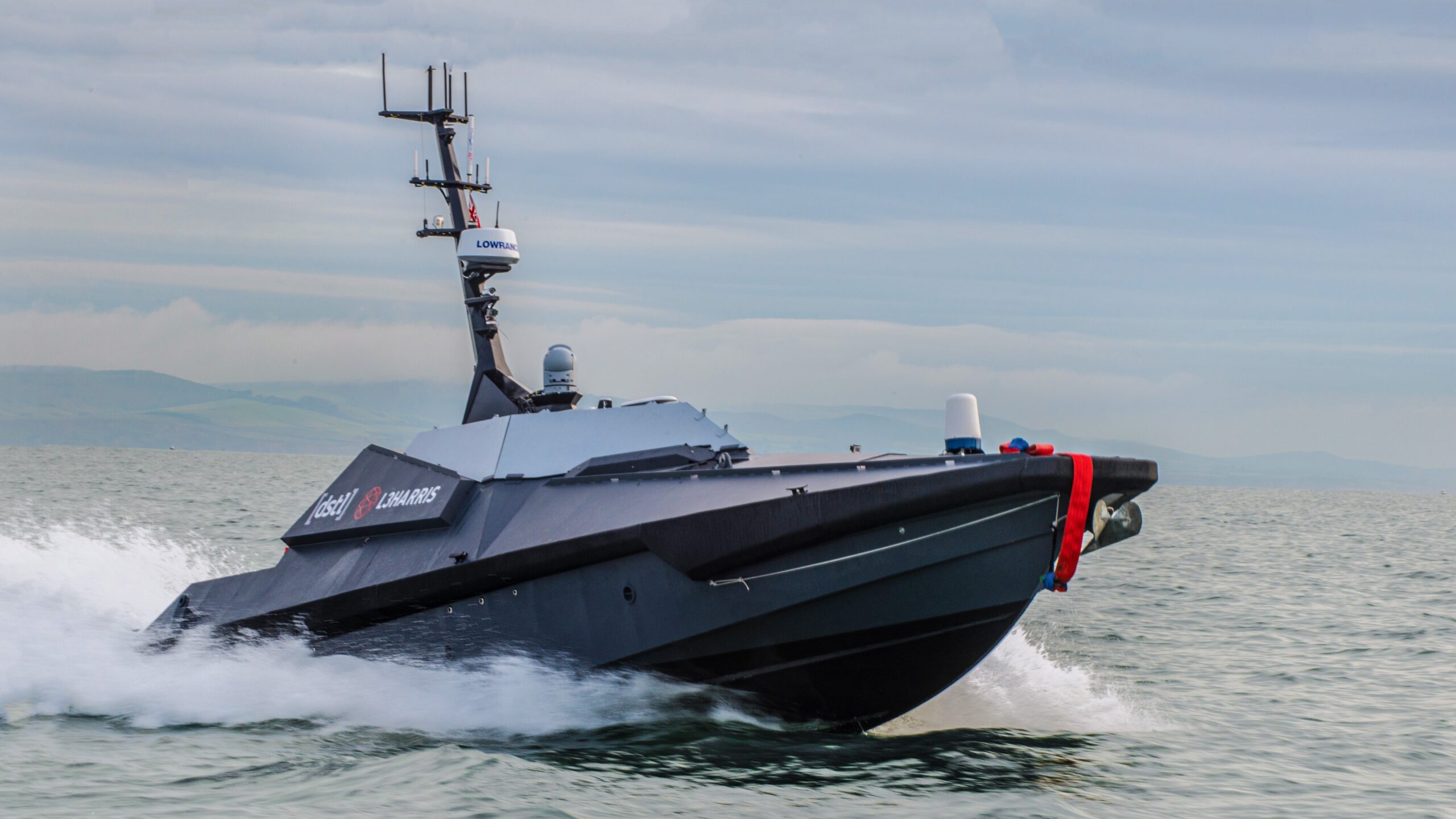 A 13m-long (41ft) MAST-13 Testbed autonomous vehicle, named Madfox, that was delivered by L3Harris to the RN’s NavyX experimentation division.
(Courtesy DSTL)
From Breaking Defense by Tim Fish
Now in its fifth iteration, the MAPLE 5 architecture has moved away from the individual command and control of single platforms towards operating multiple platforms and the development of operational concepts at force level.
AUCKLAND: Enamored with a vision of a future fleet of autonomous air, ground, surface and underwater vehicles, Britain’s Royal Navy is investing in the creation of a Naval Strike Network, designed to provide the command-and-control backbone for its unmanned systems.
For that to work, it needs a brain: a program known as the Maritime Autonomous Platform Exploitation, or MAPLE, with which the baseline information architecture that the UK needs for any of its ambitious plans for unmanned platforms come to reality.

The program, run through the MoD’s Defence Science and Technology Lab (DSTL), started in 2016 and has been used in exercises such as Unmanned Warrior in 2016, Autonomous Warrior in 2018, Autonomous Advanced Force in 2019, and most recently Robotic Experimentation and Prototyping in 2021 (REP 2021) as well as its own smaller events where experiments were conducted to prove how the system can become the baseline architecture for unmanned systems.

Now in its fifth iteration, the MAPLE 5 architecture has moved away from the individual command and control of single platforms towards operating multiple platforms and the development of operational concepts at force level.
The intention is to evolve the architecture to be able to implement a broader suite of unmanned systems and make sure it is robust enough to meet the rigors of naval operations.

James McIntyre, principal scientist at DSTL, told Breaking Defense that “Within an operations room [MAPLE] provides the command and control of multiple unmanned systems breaking down those stove-pipes. We have demonstrated that from a single C2 node we can control multiple uncrewed vessels.”
Watch as the L3Harris MAST13 Autonomous Surface Vehicle is used by the Royal Navy and Royal Marines during an Advanced Autonomous Force exercise in Norway.
At a theoretical level, an information architecture focuses on organizing, structuring, and labelling content in an effective and sustainable way, with the goal of helping users access relevant data and complete tasks.
In the context of unmanned vehicles, MAPLE serves as a structure for taking in information, deciding the best way to apply that information to its tasks, and then sending those orders out to the vehicles — something essential to the idea of managing large numbers of unmanned systems in the future.

This means that any hardware and software employed in the Naval Strike Network needs MAPLE to manage the flow of information so that operators can control unmanned systems from a warship’s combat management system or other workstations used in different ships or shore installations — with control transferable between them.

Until now the introduction of uncrewed systems into the fleet has been through the purchase of individual platforms with their own C2 consoles, information architecture, communications links and data management systems, which are not integrated into wider naval networks or the combat management systems of warships. MAPLE will serve to integrate these systems fully.

By using open standards, DSTL has developed the structure and set principles for the way in which they want to integrate maritime unmanned systems.
This documentation and guidance will, at some point, inform what systems can and cannot be purchased by the MoD — if not compliant with MAPLE, they won’t fit Britain’s needs.

But developing MAPLE from a S&T effort into a fully capable baseline for the Naval Strike Network is where the next real challenge lies.
One particular hurdle: making the system “interoperable by design” with non-UK forces.

Ships operate in task groups and as part of coalitions, so the aim of MAPLE 5 is understanding how to control maritime autonomous systems from a wider force rather than an individual ship.
Because it is assumed the UK will not fight on its own, coalition operations are the starting premise of the governance model being introduced for autonomous operations.

To make that happen, different information architectures have to work with each other. For example there would have be an alignment of MAPLE with the US Navy’s Common Control System (CCS). Work on this has progressed and at the REP 2021 Augmented by Maritime Unmanned Systems exercise, a US CCS station was integrated and could task unmanned systems that were under the control of a UK MAPLE C2 node.

This was achieved using an “interchangeability to interoperability” message standard that was conceived through the MAPLE studies and made functional under the Naval Strike Network program. This approach is being proposed as a new NATO standard for maritime autonomous system interoperability within a coalition force.

McIntyre said that in 2022 DSTL plans for synthetic experimentation to build on initial force concepts, and to conduct studies on how lethal and non-lethal effects will impact MAPLE’s control of unmanned systems.
DSTL will also build and develop candidate applications and technologies for testing in the new environment.

However, it is not a simple plug-and-play issue just yet.
McIntyre said that because many combat management systems are classified but most unmanned systems are unclassified, tying the latter into the former is a challenge.
The current plan, he said, involves an effective use of data guards to ensure that only the right data can flow back into the ship while still allowing human operators to command the unmanned fleet.

He added there is also a “cultural challenge” to overcome, as many of unmanned systems manufacturers provide their own C2 systems.
“We have been keen to demonstrate that we are not trying to do away with the good work and innovation of industry but to show that [NSN] would be a more effective route for them to exploit their systems.”

There is also a lot of human factors work being undertaken by DSTL at its Command Lab in Portsdown West.
Alasdair Gilchrist, above water systems program manager at DSTL, told Breaking Defense that they want to minimize the effort of controlling multiple unmanned systems and avoid overburdening the operators.
“We are bringing in real operators to look at the challenges. We don’t want data overload, if you put a lot of sensors on these un-crewed vessels — which we have been doing — like full motion video, communications, you can quickly become overloaded in the operations room,” he said.

Data can be passed from an unmanned system to a ship and it will be collated in the operations room. This can then be used to give the command courses of action to the operator so they can make the right tactical decisions to meet their objectives.
“The Naval Strike Network is not just an engineering information architecture on its own, it is looking at all these things around it regarding multi-level security, data volumes, data guards, human factors, restrictions on sharing from international partners, across the air, surface and underwater (mine countermeasures) domains,” Gilchrist added.

DSTL is part way through developing MAPLE 5 and is holding a further series of workshops with its military advisers and stakeholders in the Royal Navy and Royal Marines to refine concepts of use, user requirements and systems requirements to make sure it meets their needs.
DSTL is also working with a team of industry partners.

QinetiQ won the DSTL contract to help lead the development of MAPLE 5 following its lead during the preceding MAPLE 4 iteration.
BAE Systems had secured the earlier MAPLE 2 contract and is still part of the team along with SeeByte and Thales, which all lead on different sub-elements of the MAPLE 5.

McIntyre said MAPLE 5 is a departure compared to earlier programs due to the broader engagement of other large firms, including DIEM Analytics, BMT, and L3 Harris ASV.

Partly in parallel with and beyond MAPLE 5 it is the ambition of the Royal Navy to transition the MAPLE 5 architecture into the Naval Strike Network.
Whilst MAPLE is already a robust architecture the “5” program has been agnostic looking at broader use cases for the architecture outside of C2. So according to McIntyre, the next steps will be to go back to specific use cases such testing maritime autonomous systems and refining the architecture.

He said this could include assessing it in a defensive surface warfare or anti-ship missile defense context and from that then building apps and vehicles to test those concepts using MAPLE.
Links :
Posted by geogarage at 1:54 AM