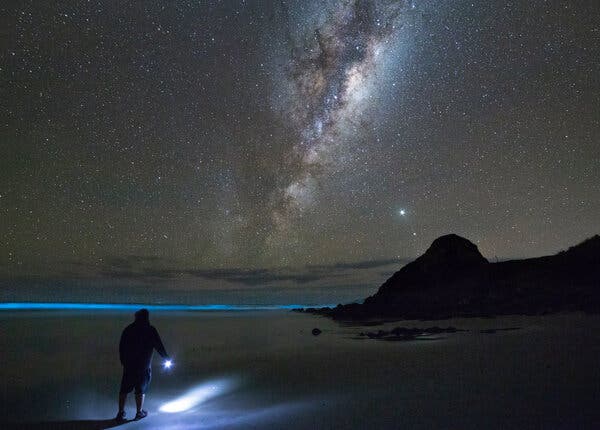 Capturing bioluminescence, a phenomenon in which glowing algae give crashing waves an electric blue glow, requires technical skill and a bit of luck.

On hot, moonless nights in New Zealand, they fan out across beaches in search of an elusive, shimmering quarry.

They aren’t hunters, but photographers chasing bioluminescence, a natural phenomenon in which glowing algae give crashing waves an ethereal, electric blue aura.

New Zealand is an especially good place to “chase bio,” as enthusiasts there say.
Even so, it’s notoriously hard to predict where and when bioluminescence will appear.
And photographing it in near-total darkness — at 3 a.m., as you stand knee-deep in the surf gripping a tripod — presents extra obstacles.

“It is very, very difficult to catch sight of, and sometimes it does come down to blind luck,” said one of those enthusiasts, Matthew Davison, 37, who lives in Auckland and sometimes stays out until sunrise shooting bioluminescence.
“But part of the appeal and part of the adventure is that, because it is so hard, that’s what makes it exciting,” he added. “When you find it, when you strike blue gold, it is just such a good feeling.” 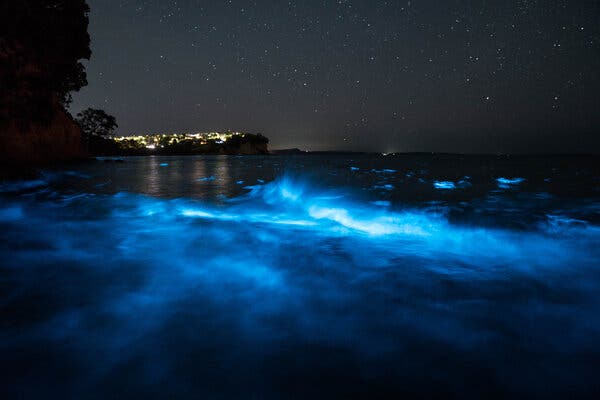 Bioluminescence is relatively rare on land but very common in the ocean.
About four in five of the animals that live 200 to 1,000 meters (650 to 3,300 feet) below the surface are bioluminescent, according to the National Oceanic and Atmospheric Administration.
The glow comes in different colors on land, but in oceans it usually appears as blue-green because that is what cuts through seawater the best.

Bioluminescent organisms — from fireflies to anglerfish — create light from energy released by chemical reactions inside their bodies.

Even though many scientists, including Aristotle and Darwin, have been fascinated by bioluminescence over the centuries, the behavioral motivations for it are still something of a mystery, said Kenneth H. Nealson, a professor emeritus at the University of Southern California who studied the phenomenon for decades.

Scientists generally think that organisms light up in order to communicate with one another, lure or detect prey or warn or evade predators.

The most popular explanation for why algae glow in the oceans is the “burglar alarm” hypothesis, Professor Nealson said.
It holds that the organisms glow when big fish swim by in order to scare off smaller fish that eat algae.

Bioluminescence at Big Manly Beach in January 2022.
Credit...Grant Birley
Coastal waters turn blue during periods when algae, which live near the surface of oceans, multiply in especially nutrient-rich waters.
The specific flashes of blue-green light come in response to pressure changes that waves create as they crash.

The waves pose no threat to algae, Professor Nealson said, but algal blooms light up anyway because algae are programmed to respond to pressure changes that fish create when they swim by in the open ocean.
“That luminescence is probably of no help at all to those algae that are in the cusp of the wave and giving off the light,” Professor Nealson said.
“But if they were back a little further offshore, it could be a very good behavioral mechanism” because it could help them scare off predators.
Seeing Blue

Photographers who hunt bioluminescence in New Zealand, many of whom have day jobs, say that summer is generally the best time to spot it.
(Summer runs from December to March in the Southern Hemisphere.)
Nights after rainstorms are best, they say, because water that runs off land into the ocean often includes nutrient-rich material that attracts algae. 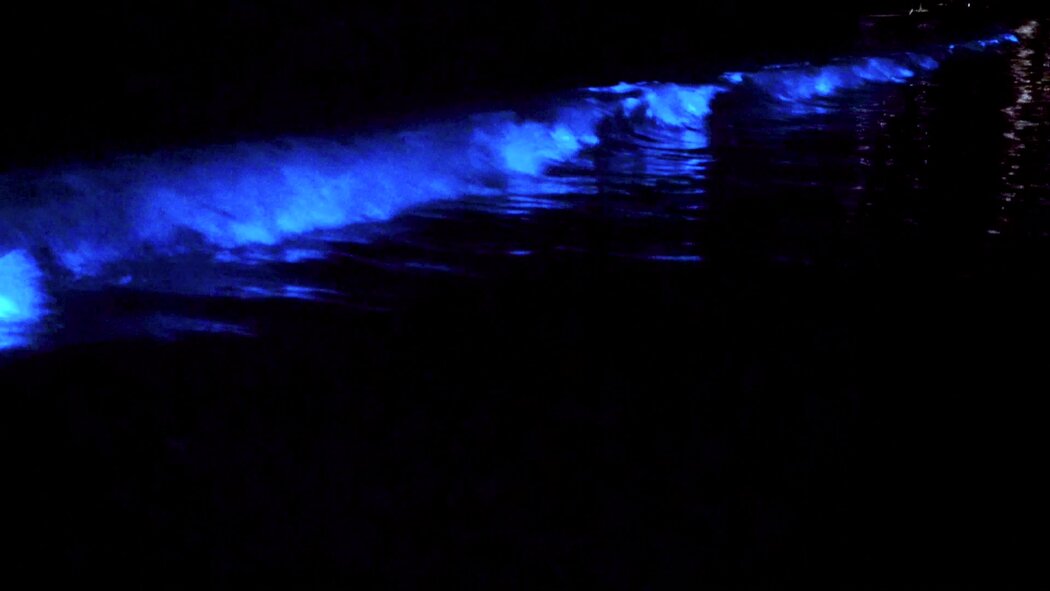 Credit...Matthew Davison
Mr. Davison, a product developer for a technology company, has a method for finding bioluminescence. First he studies satellite imagery to identify algal blooms off the coast.
Then he combs through other indicators, such as wind direction and tidal patterns, to predict where waters may glow.

He’s an exception, though. Other photographers mainly rely on a mix of luck, intuition and the occasional tip from neighbors who spot sparks of blue during walks on the beach.

“If I’m perfectly honest, probably eight out of 10 times I capture it is either by chance or just a gut feeling that it might be around,” said Grant Birley, 48, who works in the orthopedics industry and often stops to photograph bioluminescence during his two-hour commute along the coastline of New Zealand’s North Island.
“It’s not an educated guess at all.”

One source of intelligence is a private Facebook group that was created two years ago for people in the Auckland area to discuss sightings of bioluminescence.
It now has more than 7,000 members and welcomes about 2,000 new ones each summer, said Stacey Ferreira, one of the group’s administrators.

Ms. Ferreira said she created the group so that others could “tick the beautiful phenomenon off their bucket lists,” as she did in 2020.
“It’s been great!” she wrote in an email.
“People from every background have joined — talented photography enthusiasts, bioluminescence researchers, scientists, families and everyone in between.”
Shots After Dark

For “bio chasers,” finding the glow is just the start of the process of capturing a memorable image.
After arriving at a beach, they typically set up tripods in the surf and spend hours shooting, sometimes in near-total darkness, as blue patches flicker intermittently across the shore.
Sometimes the flicker dies off after a few minutes, and they head home empty-handed. 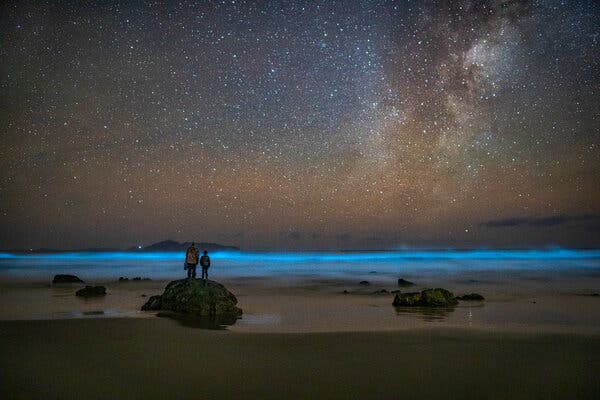 Grant Birley and Alex, his son, at Mangawhai Heads Beach in New Zealand in May 2020.
Mr. Birley often stops to photograph bioluminescence during his two-hour commute along the coastline of New Zealand’s North Island.
Credit...Grant Birley
When “bio” is present, a key challenge is deciding how long to expose an image.
Mr. Birley said the timing could range from one second to nearly two minutes and that it could be hard to check on the fly — by looking at a tiny camera screen — to see whether the exposure times are correct.

Another challenge is that images of bioluminescence sometimes include details that weren’t visible when the shutter clicked.
That is because a camera sees far more than the naked eye, especially in long nighttime exposures.

“In the daytime you look and say, ‘There’s a tree and a sunset and a cliff and I’ll move over to the left,’” said Alistair Bain, 38, a high school teacher who lives near Mr. Birley on the suburban Whangaparaoa Peninsula, north of central Auckland.
“You’ve got none of that at night.” 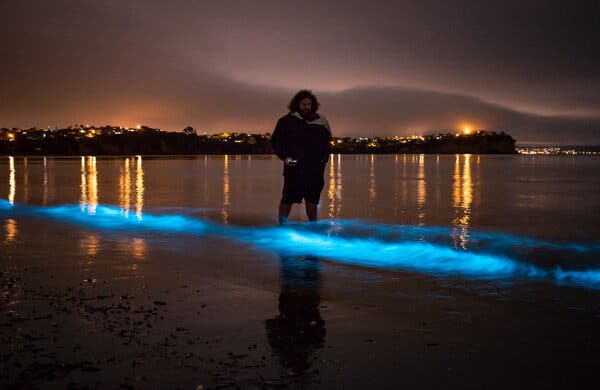 For all the challenges, photographers say that hunting bioluminescence is rewarding in part because the phenomenon is endlessly surprising.

One clear night, Mr. Bain drove about 40 miles to a beach where he hoped to photograph the Milky Way galaxy.
When he arrived, he saw not only a sky full of stars but a glowing shoreline
“That was a special one to come across by accident,” he said.

Another time, Mr. Davison stepped out his car at a beach with low expectations.
It was raining, and he assumed that would be a problem because heavy rain typically spoils a bioluminescence show.

But in this case, the rainfall was gentle enough that it had activated glowing algae across the ocean’s surface for as far as he could see.
So he grabbed his camera and started to shoot.

“Unless you’re there, unless you capture it, no one would believe — could not even possibly imagine — what you’re witnessing,” Mr. Davison said.
“That’s why I love taking photos and videos of this. The best way to share what you’ve seen is through the power of an image.”
Links :
Posted by geogarage at 1:41 AM