Europe’s satellites could help catch the next climate disaster 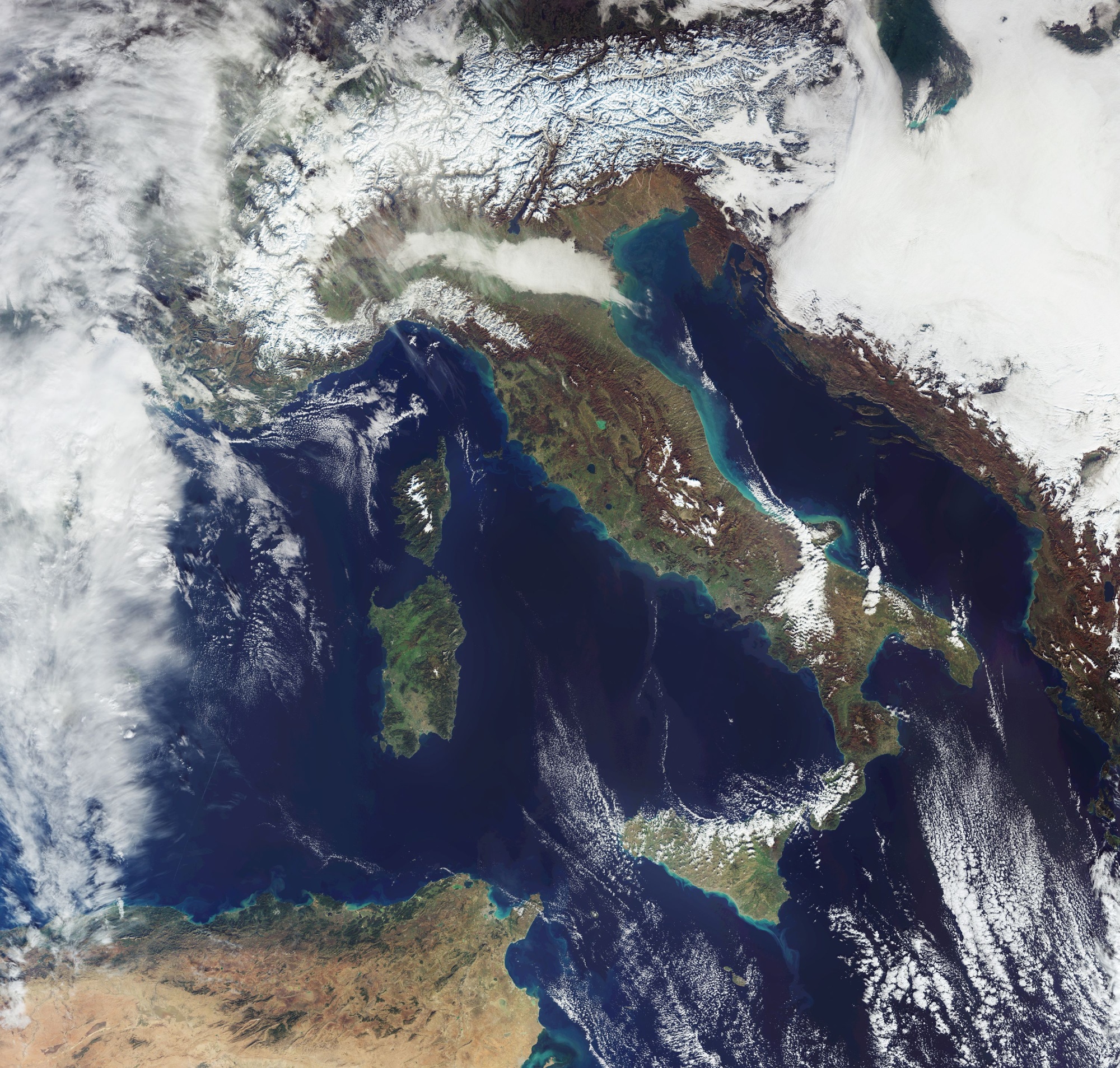 The European Space Agency’s Sentinel-3 satellite captures snow cover and clouds across the Alps on Dec. 14.
Credit: ESA/Copernicus
From Bloomberg by Jonathan Tirone

Spain began the new year battling Storm Filomena, a once-in-a-generation weather event that blanketed Madrid in snow and paralyzed the economy.
Health workers were stranded, supermarkets shut, and the army was called in.
At least four people died.

“Now, consider a government or company that knew two weeks ago there was a risk that this would happen,” said Francisco Doblas-Reyes, a physicist at Barcelona’s Supercomputing Center.
“Knowing the risk that a 1-in-20-year event was going to happen would have given more possibilities to prepare.” This handout image released by the European Space Agency on 19 November, 2020, shows the Sentinel-6 satellite, dedicated to measuring sea levels as part of the European Union's Copernicus Earth Observation.
(Photo credit: AFP PHOTO/ European Space Agency)
Doblas-Reyes and his team are working on complex models that they hope can better detect the next Filomena, a job that’s become increasingly important as climate change makes weather more unpredictable — and extreme.
The data collected by European satellites is at the heart of the continent’s multibillion-euro Destination Earth program seeking to develop the world’s best digital simulation of Earth.

“We have the gold standard of satellite infrastructure in space,” said Josef Aschbacher, the geophysicist who’ll become Director General of the European Space Agency this year.
Europe’s space agency has 16 Earth observation satellites in orbit with some three dozen under development and, according to Aschbacher, is in talks with the U.S. National Aeronautics and Space Administration to assume even greater responsibility for climate monitoring in the next decade.

As U.S. climate research took a backseat to human spaceflight, deep-space exploration and the creation of a military force for outer space during the Trump administration, European scientists have focused on finding new ways to understand the changing atmosphere.
In November, the EU launched a satellite on board a NASA-backed Space X rocket that can track miniscule changes in sea levels, down to the millimeter.
New projects are underway to monitor freshwater flows and greenhouse gas emissions, technical challenges akin to forecasting how a drop of ink will disperse inside a choppy pond.

By using artificial intelligence and supercomputers, the first digital-twin simulations of Earth could be ready by 2028, according to Aschbacher.
The ESA’s data is publicly available, allowing everyone from the scientists in Barcelona to farmers and insurers to improve their own models at the same time.
“If you really want to make it useful, you have to make sure the information is available in a way that people can visually use it,” he said.
“What the people really want to know isn't just the status of today but a projection of the future.” 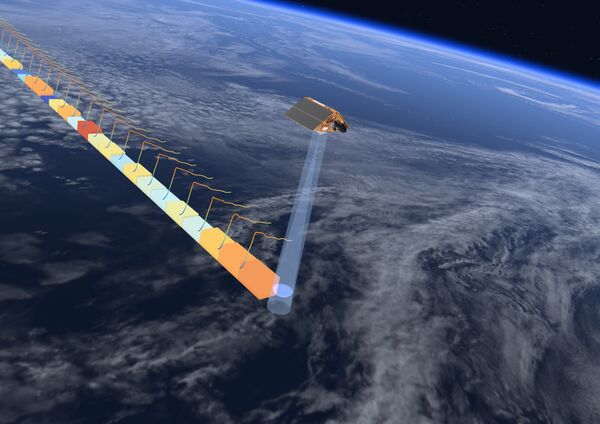 The Sentinel-6 updates maps of the oceans covering 70% of the planet every 10 days.
Credit: European Space Agency
U.S.researchers running their own Earth-system simulations — an idea first conceived by Vice President Al Gore in the 1990s — say the EU has taken the lead in boosting climate-model resolutions.
The new tools will enable researchers to drill down and detect changing patterns within a kilometer area, compared with about 10 square kilometers at present.
That should give scientists new insight into phenomena like cloud formation and how ocean eddies transport heat.

The new climate models also have the potential to help investors make better decisions.
Storms, fires and floods killed at least 8,200 people and cost the world $210 billion in insured losses in 2020, according to a report published this month by Munich Re.
Those damages could swell as the world inches closer to crossing the 1.5 degree Celsius warming threshold that scientists predict will lead to more frequent superstorms and higher sea levels.

“There’s a lot of information there but too much information is also bad,” European Central Bank Governing Council member Robert Holzmann said in a November interview.
“You cannot get the right signals from it.
The information has to be brought down to a handful or two of criteria that are the most critical.”

To solve that problem, European scientists are working on a series of easy-to-read climate indexes that could inform investment decisions in the future, according to EU documents.
They’ve teamed up with traders and weather analysts from European utilities including Electricite de France, EDP Renovaveis SA and Vattenfall AB to develop such tools — with varying degrees of success.

“Meteorologists at EnBW trust the science and statistical methods on which the tool is based,” said Michael Christoph, a weather analyst at German utility Energie Baden-Wuerttemberg AG.
“However, building the same trust among energy traders will take some time.” 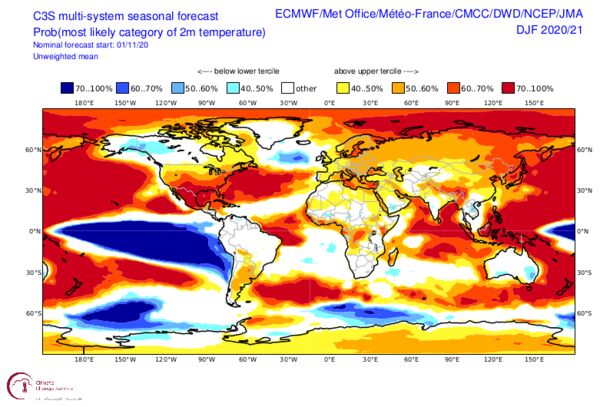 Monthly seasonal forecasts of temperature, precipitation and atmospheric pressure need to increase levels of accuracy
Credit: Copernicus Climate Change Service
At present, seasonal weather models published by the ESA’s climate service aren’t always up to the task of supporting longer-term investment decisions because they aren’t calibrated to catch events like Storm Filomena and only generate broad probabilistic forecasts.
But that could change in coming years as 8 billion euros pours into a new generation of supercomputers capable of calculating billions of equations every second, according to Doblas-Reyes.

“There is a continuum of information that these companies need, information ranging from the next hour to the next day to the next weeks,” he said.
“We need to help government prepare and companies to profit from these events.”