The Arctic Ocean is teeming wth microfibers from clothes 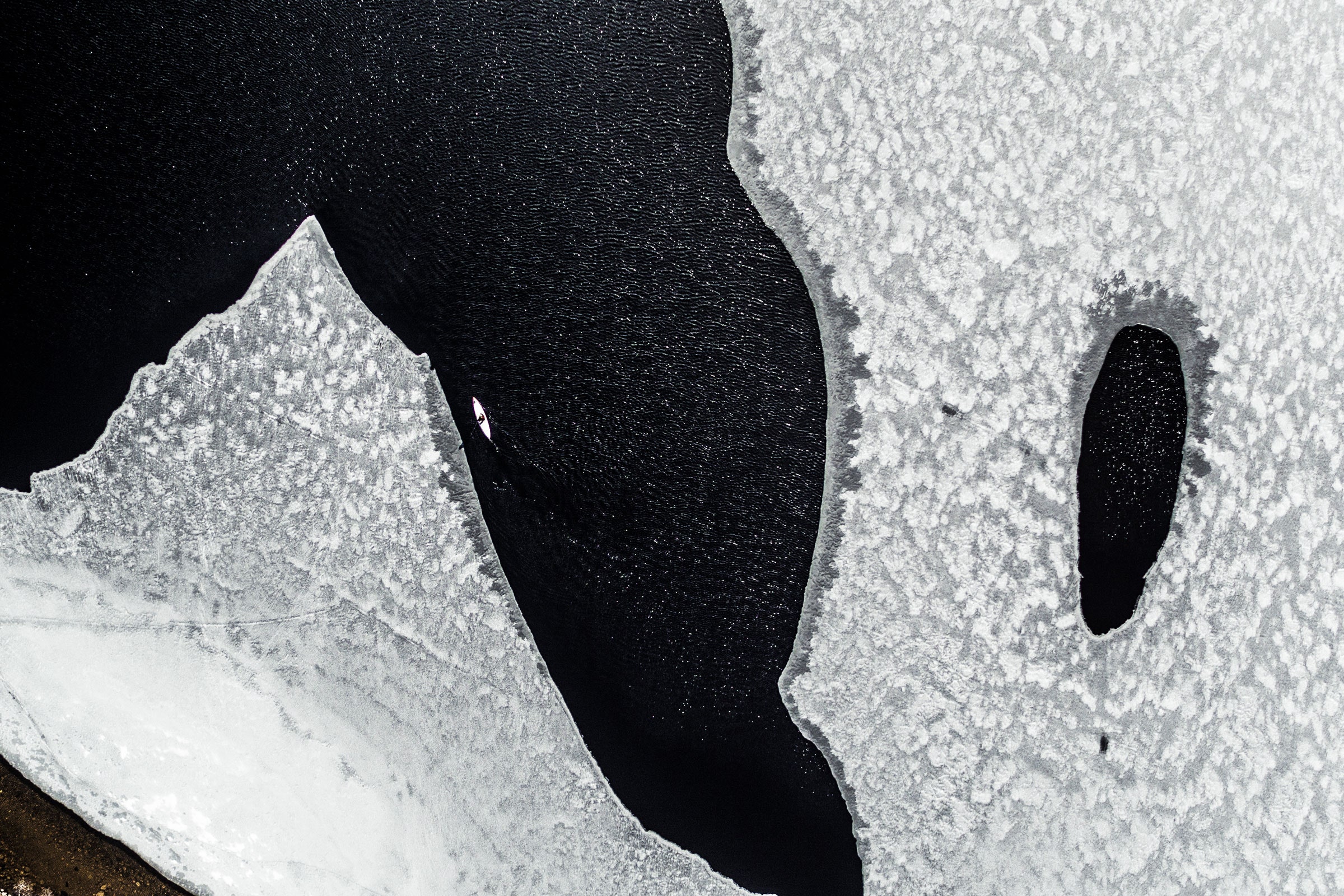 Getty Images
From Wired by MattSimon

Scientists find an average of 40 microplastic particles per cubic meter of the northern water.
The likely source? The synthetic clothing in our washing machines.

Throw a polyester sweater in the washing machine and it’ll come out nice and clean, but also not quite its whole self.
As it rinses, millions of synthetic fibers will shake loose and wash out with the waste water, which then flows to a treatment plant.
Each year, a single facility might pump 21 billion of these microfibers out to sea, where they swirl in currents, settle in sediments, and end up as fish food, with untold ecological consequences.

Everywhere scientists look in the world’s oceans, they’re finding microfibers, technically a subcategory of microplastics, which are defined as particles less than 5 millimeters long.
And now, after making four expeditions across the Arctic Ocean, a team of scientists is reporting just how badly even these remote waters have been tainted.
Sampling as deep as 1,000 meters, they found an average of 40 microplastic particles per cubic meter of water, 92 percent of which were microfibers.
Nearly three-quarters of these were polyester, strong evidence that humanity’s addiction to synthetic clothing is corrupting Earth’s oceans.

“It simply illustrates just how contaminated our planet has become with synthetic polymers,” says Peter Ross, an ocean pollution scientist and marine pollution adviser at Ocean Wise Conservation Association, a conservation NGO, and lead author on a new paper in Nature Communications describing the findings.
Sea ice in the Canadian Arctic Archipelago in July 2017.
Seawater samples were taken from 71 locations across a vast swathe of the Arctic region.
Credit: David Goldman/AP
Ross and his fellow researchers from the Department of Fisheries and Oceans Canada took care not to sample surface waters, which tend to accumulate buoyant styrofoam and lost fishing gear.
For this reason, that water is not a proper representative sample of the plastic pollution that lurks in the sea.
Instead, they had to collect water from a few meters beneath the surface, and—conveniently enough—their research vessels had intakes ports situated on the bottom of their hulls.
The scientists also took samples up and down the water column, as deep as 1,015 meters, from six stations in the Beaufort Sea above Alaska.

They had to be sure, though, that they weren’t mistaking natural particles for synthetic ones, so they employed a forensic technique called Fourier transform infrared spectrometry, or FTIR.
An instrument bombards the particles with an infrared beam, exciting certain molecules in the sample, and analyzing the infrared signature reflected back at the detector.
In this way, the scientists could not only confirm whether a particle was synthetic, but could also determine what kind of plastic it was.
“Even our trained technicians in our group would often mistake these mystery particles for plastic when they are in fact something natural,” says Ross.
“So the FTIR is very important to confirm that the mystery particle is plastic or not.”

Particles confirmed, the team measured their lengths and diameters, which matched the known dimensions of synthetic fibers.
Nearly 75 percent of the fibers were polyester, a common material in synthetic clothing, and they came in a range of colors too.
“The alignment is striking,” says Ross.
“All of this really does line up our concerns around the prospects of a significant role for textiles and laundry in contaminating the world's oceans.” 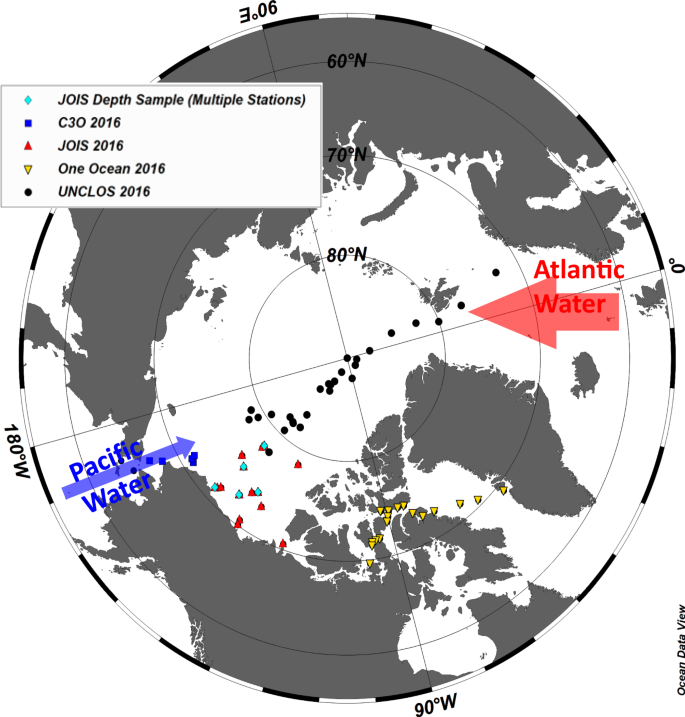 Microplastic (MP) particles were characterized in 71 near-surface (3–8 m depth) seawater samples collected during four oceanographic expeditions in 2016: (i) aboard the CCGS Sir Wilfrid Laurierwith samples from the North Pacific Ocean, Bering Sea and Chukchi Sea (C30; blue squares); (ii) the United Nations Convention of the Law of the Sea expedition aboard the CCGS Louis S. St-Laurentalong a transect from Tromsø, Norway, passing over the North Pole and into the northern Canada Basin (UNCLOS; black circles); (iii) the Joint Ocean Ice Study aboard the CCGS Louis S. St Laurentwith samples from the Canada Basin (JOIS; red triangles); and (iv) the One Ocean Expeditions RV Akademik Ioffe, with samples collected from Greenland through the central Canadian Arctic Archipelago (OOE; yellow triangles). Microplastic samples (26) were collected at six stations in the Beaufort Sea down to 1015 m (pale blue diamonds). Arrows are drawn to provide an approximate representation of the well-described inflows of Atlantic- and Pacific-origin waters into the Arctic Ocean. The width of the arrows is proportional to the volume of the inflow
source Nature
Because the team had data from four expeditions that wandered all over the Arctic, they could compare their samples from the eastern region (above the Atlantic Ocean) to the western region (above Alaska and the Yukon).
They found three times more particles in the east compared to the west.
The fibers were also 50 percent longer in the east and their infrared signature more closely resembled that of virgin polyester—indicators that these fibers were newer.
“As fibers move into the Arctic or into the environment, they get weathered, they get older over time,” Ross says.
“The infrared signature changes with sunlight, with chemical processes, with bacterial decomposition.”

Their results showed that the weathering was more evident in fibers found in the west.
So taken altogether, the scientists reckon this means that most of the particles are arriving from the east and degrading as they travel to the west.
While there is some inflow of water from the Pacific Ocean into the western Arctic, it seems that far more particles are entering the eastern Arctic from the Atlantic Ocean, where inflow is greater.
The microfibers swirl around for a time, aging and weathering, with many of them likely ending up in the western Arctic.

The findings jibe with research published last September that found that Arctic Ocean sediments are packed with blue jean fibers washed out to sea in wastewater.
Also last year, another team of scientists found that currents are transporting microplastic particles around oceans, eventually depositing them en masse in sediment “hot spots” on the seafloor. 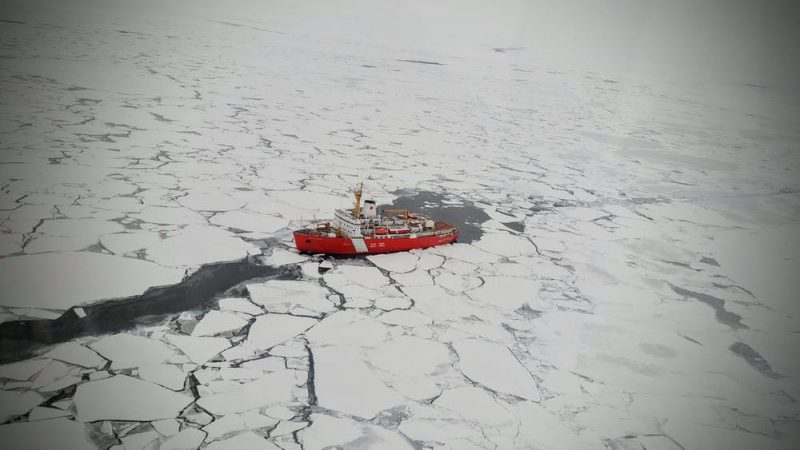 The Canadian Coast Guard Ship Louis S. St. Laurent transiting the Arctic Ocean.
This expedition between Norway and Canada collected seawater samples for microplastics analysis.
Image via Arthi Ramachandra/Fisheries and Oceans Canada.
Which is all to say: Microplastic particles and fibers are traveling vast distances.
This new research not only confirms that the Arctic Ocean is teeming with the fibers, it also offers an explanation of how they’re getting there.
It’s likely that wastewater treatment facilities in Europe and along the east coasts of Canada and the US are dumping untold numbers of them into the Atlantic, where currents carry the particles up to the Arctic.

Air transport also probably plays a role: Scientists previously found up to 14,000 microplastic particles per liter of remote Arctic snow, and they concluded that the stuff had likely blown in from continental Europe.
Researchers have also found that microplastics get transported out of the sea when waves crash and spew ocean spray loaded with particles into the air, where the tiny plastic bits can then float.

"This is an important piece of work that provides a valuable data set for future microplastic research," says University of Strathclyde microplastics researcher Steve Allen, who wasn't involved in the research.
"The level of detail is exceptional.
Their findings add a tremendous amount of weight to the discussion surrounding laundry outputs of microplastic fibers to the environment, and the need to address it quickly.
It really hammers home the fact that you can't pollute in any one place and expect that it will stay there."

One big remaining question is how those microplastics might be affecting the ecosystems they infest.
Ocean sediments are loaded with the stuff, and scientists have already discovered that fish larvae mistake these particles for food.
“We need to find out how much of this is already incorporated into the food web, which is, of course, already under threat from global climate change,” says marine ecologist Melanie Bergmann of the Alfred Wegener Institute for Polar and Marine Research, who researches microplastic in the Arctic but wasn’t involved in this new work.

Now, what to do about this omnipresent pollutant? It’s not likely that humanity will instantly phase out clothing made of synthetic material.
But we as consumers can demand that brands abandon fast fashion—cheaply made synthetic clothing that easily shreds into microfibers.
Governments can also legislate that washing machine manufacturers add fiber-trapping filters to their products.
In the meantime, you can retrofit your machine with an aftermarket filter or wash your clothes in a special bag that keeps microfibers out of wastewater.