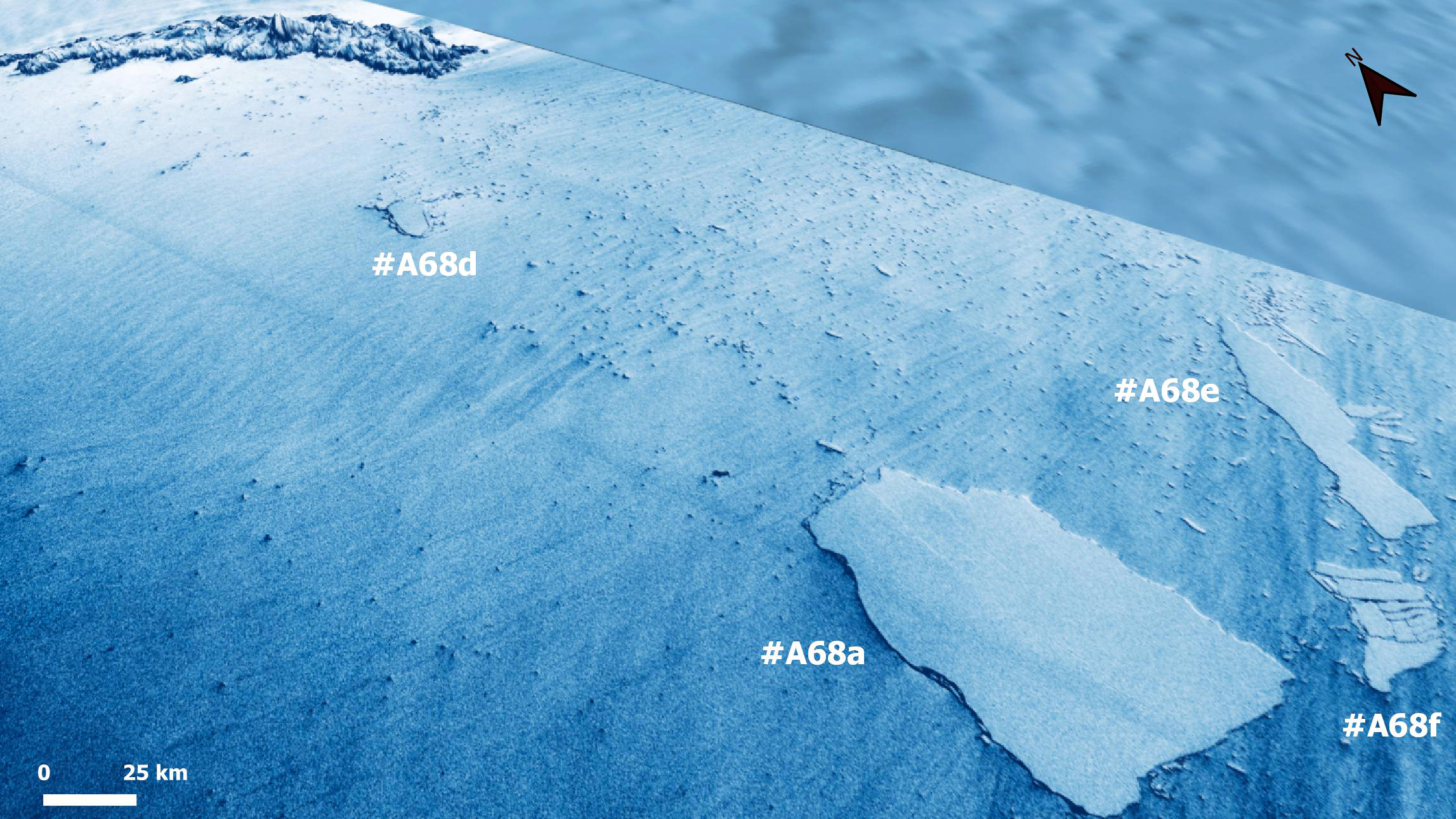 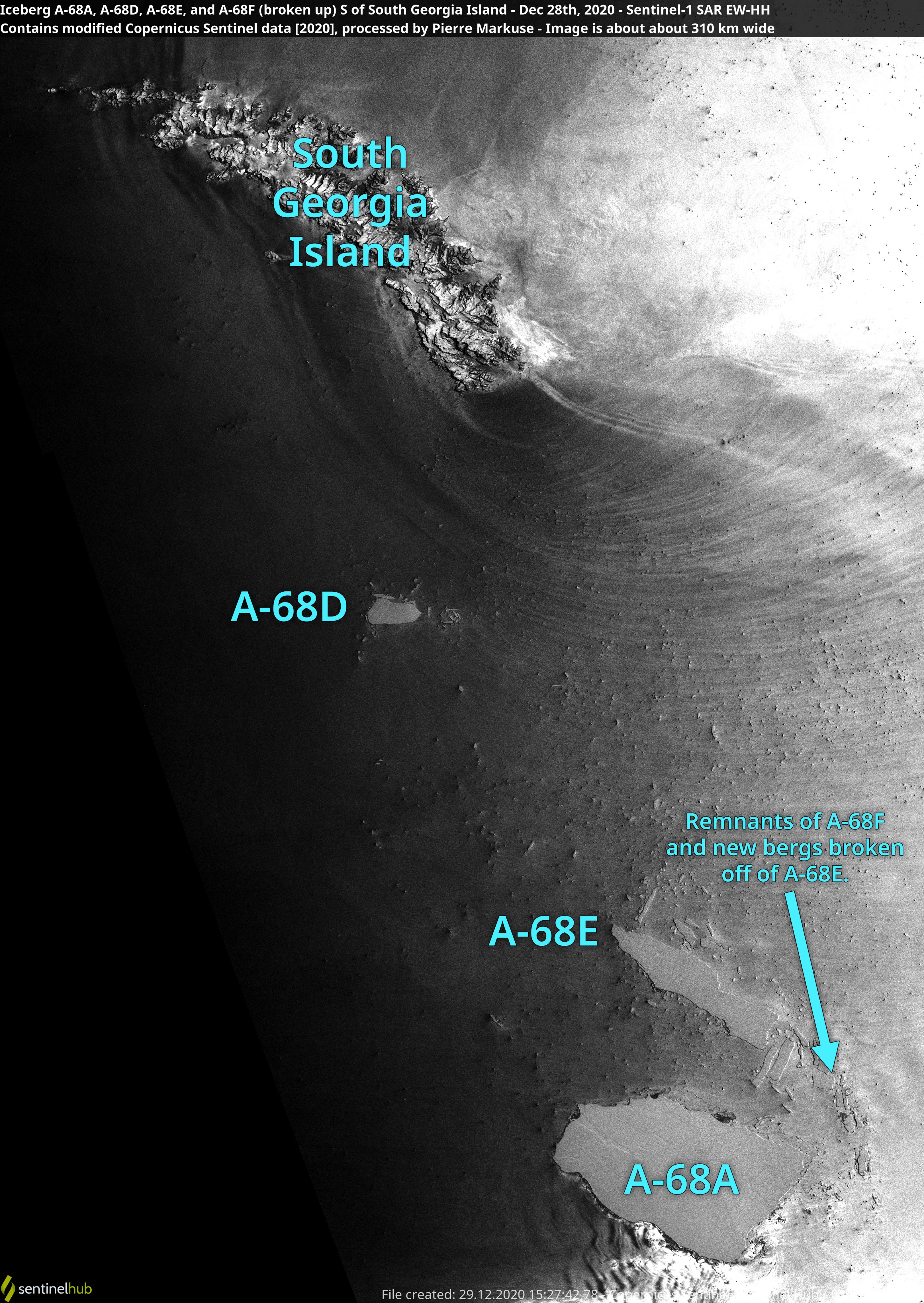 The world's (former) largest iceberg continues to break apart into smaller pieces on the doorstep of a major marine wildlife haven and home to millions of macaroni and king penguins in Antarctica.

This comes less than a week after the mammoth iceberg, known as A68a, first split in two, Live Science recently reported.

Scientists at the U.S. National Ice Center (USNIC) spotted the two newest pieces, A68e and A68f, on Dec. 22 using images from the Sentinel-1A satellite, according to a USNIC statement.
This means that there are now four separate iceberg fragments, including A68d, which will eventually drift away from one another.

A68a became the world's largest iceberg when it split from Antarctica's Larsen C ice shelf in July 2017, Live Science previously reported.
The massive chunk of ice has been drifting northward ever since. As recently as April, it measured 2,000 square miles (5,100 square kilometers), or just over the size of the state of Delaware.

In the spring of 2020, A-68a set its sights on South Georgia Island, a wildlife refuge in the South Atlantic Ocean that's home to millions of penguins, seals and other marine wildlife.
Experts feared that if it were to get stuck on the island's shallow sub-continental shelves, it could majorly interfere with the animals' ability to hunt for food.
"The actual distance [the animals] have to travel to find food (fish and krill) really matters," Geraint Tarling, an ecologist with the British Antarctic Society, said in a statement. 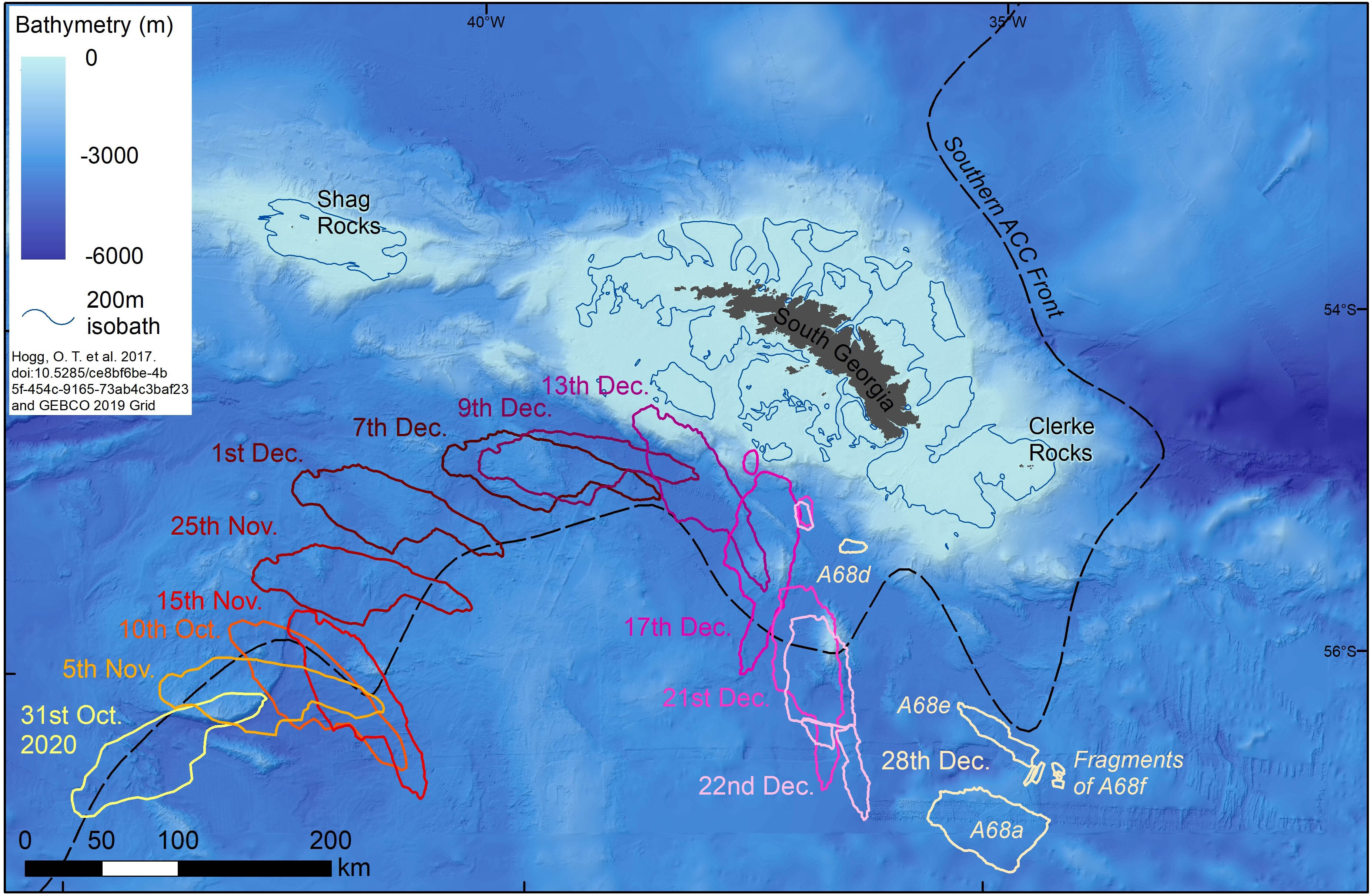 A68 position from Sentinel-1 image acquired late on 28th Dec. 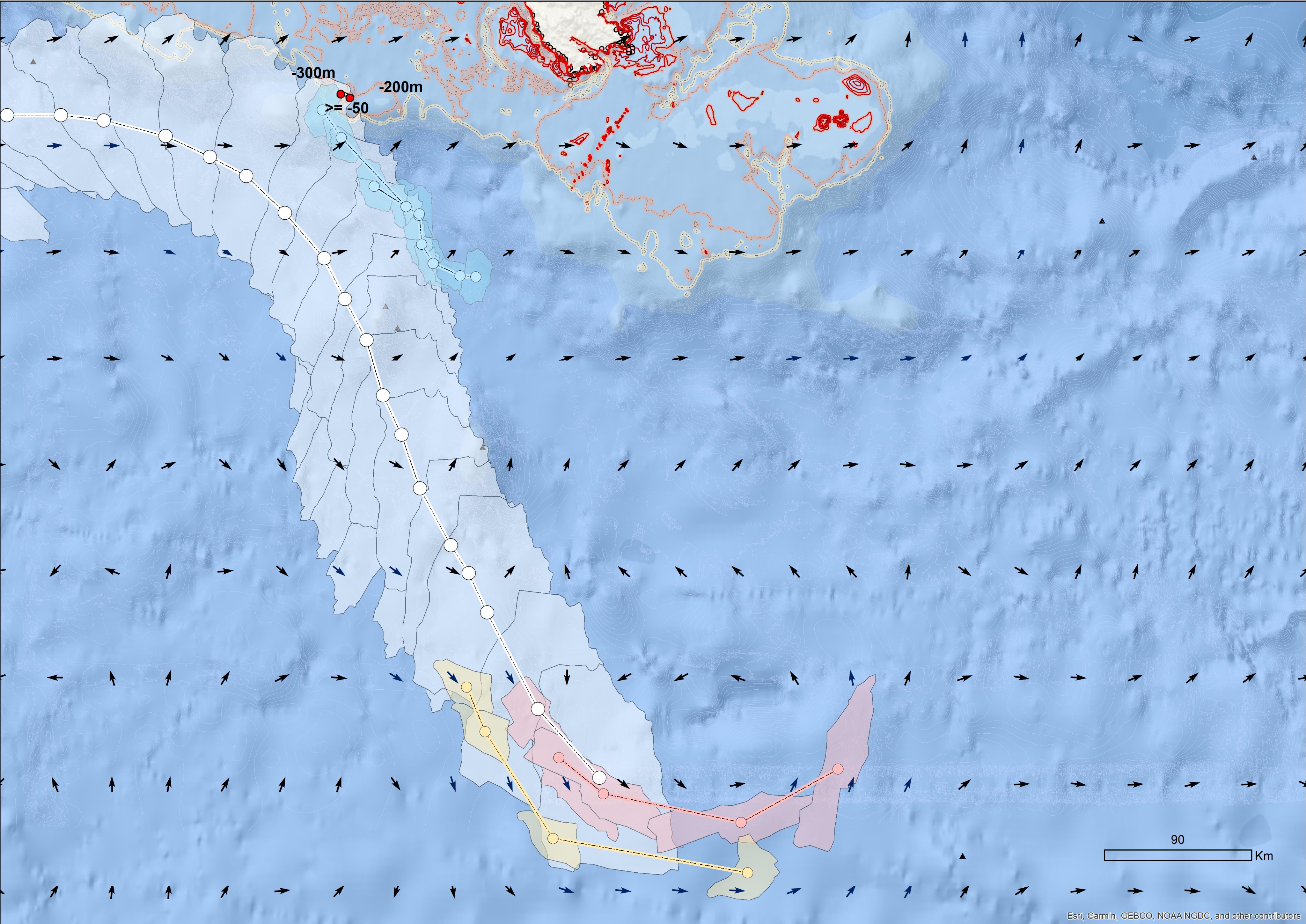 Map update, A68x as of 2020-12-26
While A68d remains nearby the position of the last days, A68a, A68e& A68f(broken) continued the journey southwards.
Following the currents, "e" already is taking north direction, so we can expect that "a" and f" will follow.
"If they have to do a big detour, it means they're not going to get back to their young in time to prevent them starving to death in the interim."

However, it appears that those underwater shelves are actually what has caused it to start breaking apart.
Before splitting in two, the iceberg began spinning clockwise, suggesting one end had been caught on the shelf.
The force of this snag is believed to be behind that split and the more recent fracturing as well.
Laura Gerrish, a GIS (geographic information system) mapping specialist at the British Antarctic Survey, estimated the areas of the new fragments, according to her post on Twitter:
A-68a: 1,004 square miles (2,600 square km)
A-68d: 56 square miles (144 square km)
A-68e: 253 square miles (655 square km)
A-68f: 87 square miles (225 square km)
It is now hoped that the biggest pieces will be carried north of the island on a fast-moving current known as the Southern Antarctic Circumpolar Current Front. 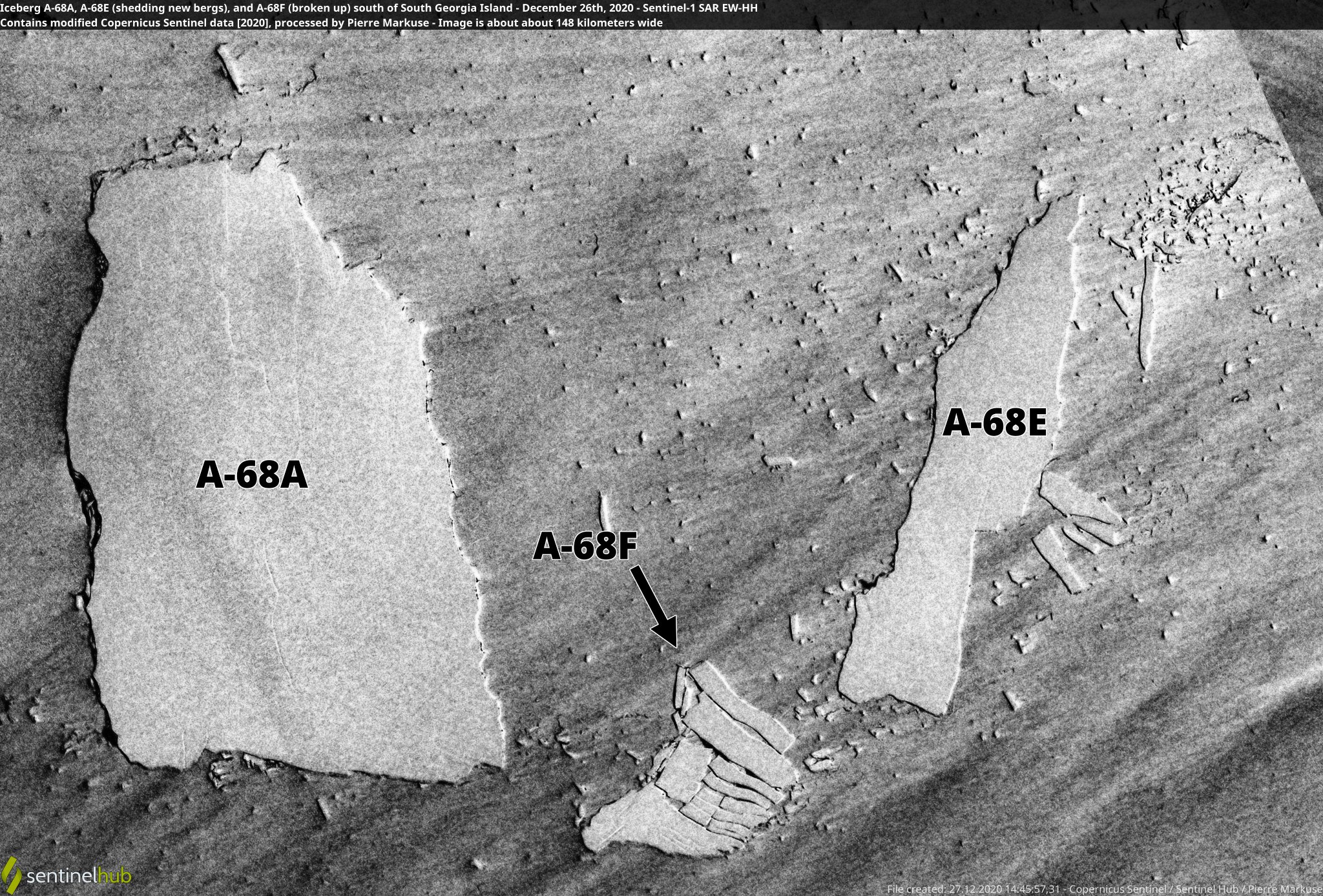 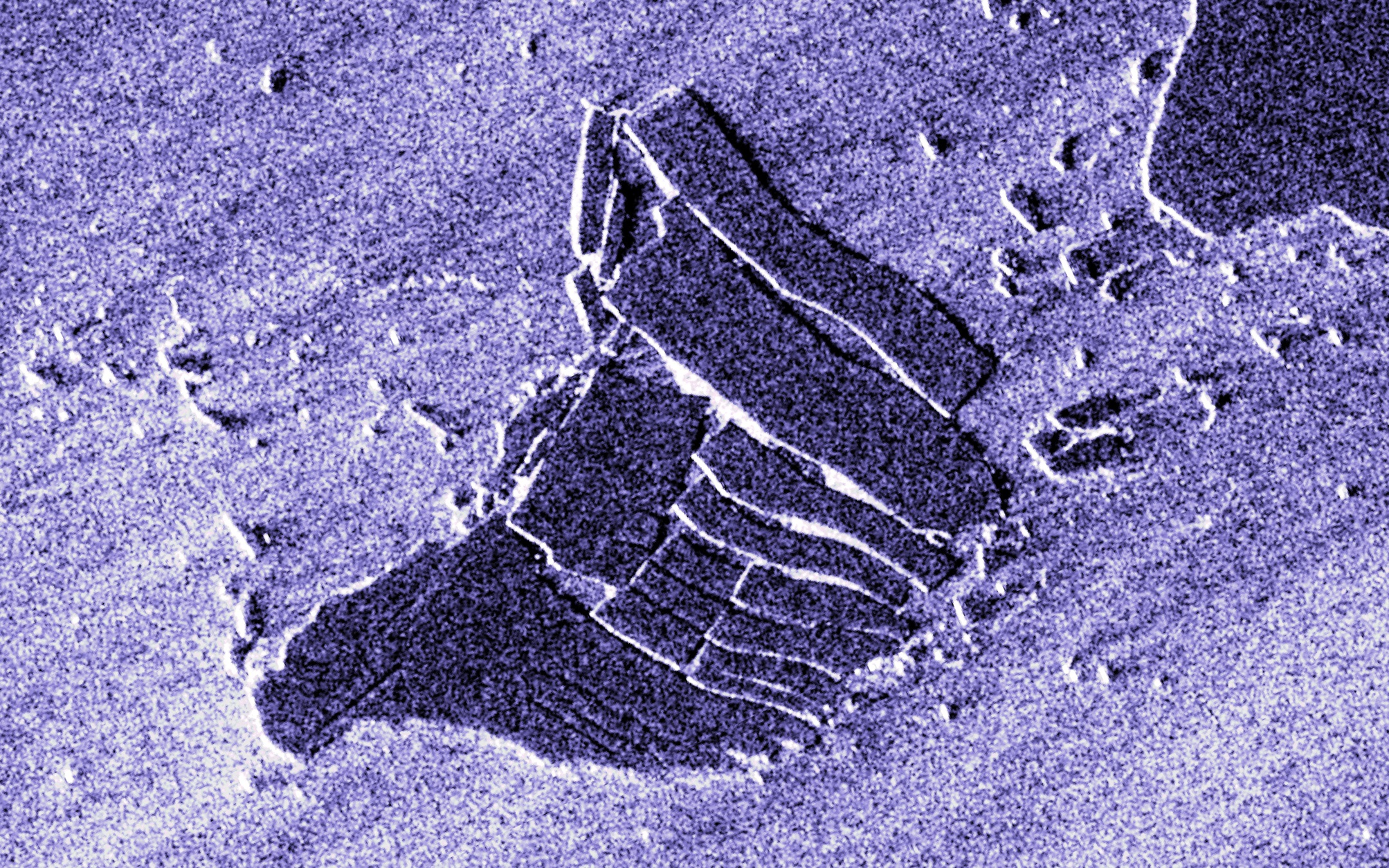 The newly created A68F iceberg itself spawns multiple smaller icebergs
However, if any of the pieces, or any potential new pieces, were to get caught on the shelves, they could still be big enough to cause disruption to the local wildlife, according to the BBC.

Researchers will now continue to monitor the situation over the holiday season, while the island's inhabitants will hope for a non-white Christmas.
Links :