Cat and mouse on the high seas: on the trail of China's vast squid fleet 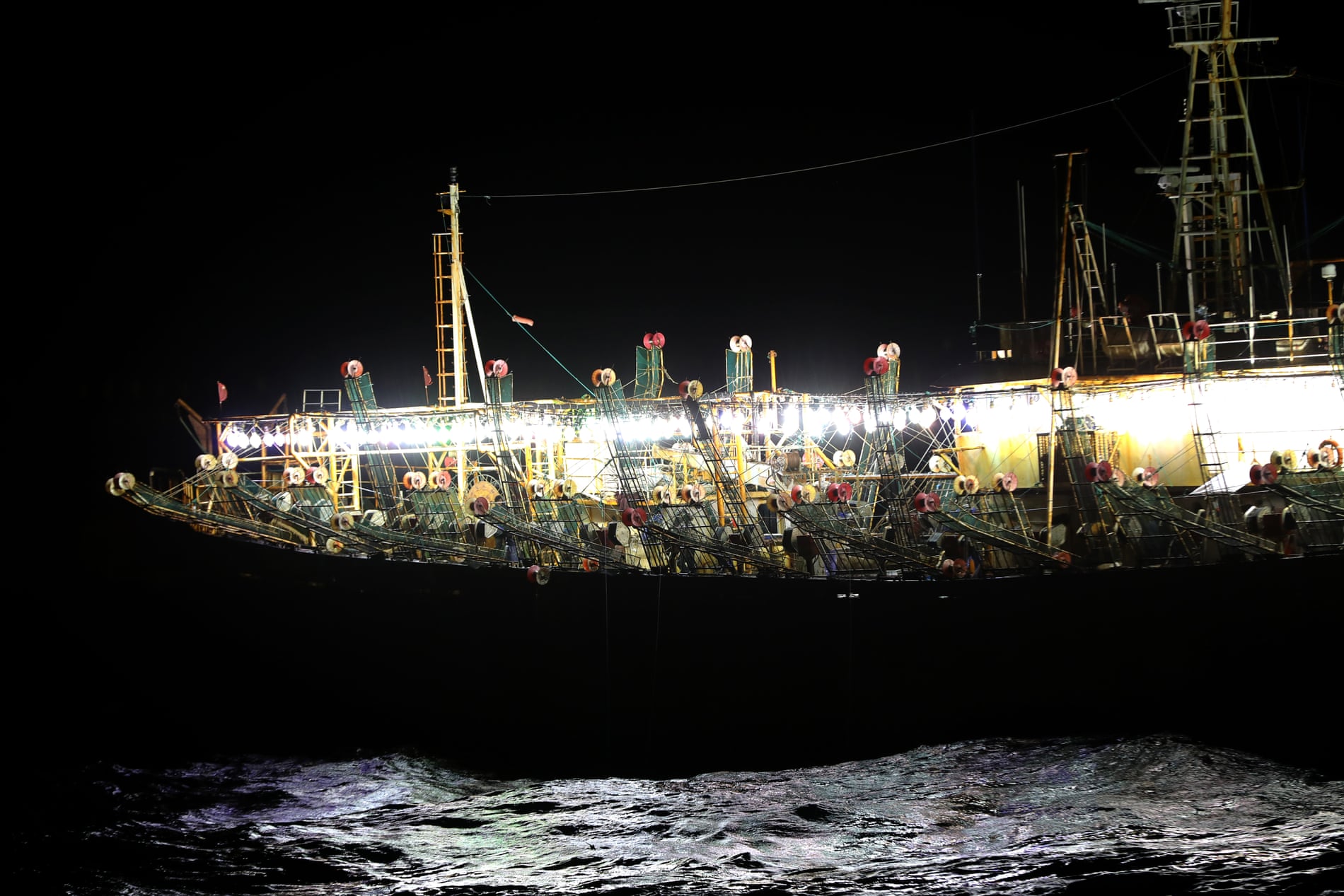 The ocean is as black as chipped obsidian, yet whichever way you look dozens of bright lights illuminate the water and the night sky.
Nearly 400 nautical miles from the South American mainland, the crew of a Peruvian coastguard ship count more than 30 Chinese squid boats lighting up the sea like a city at night.

Some of the boats shine luminous green, others glow blinding white like an alien spacecraft in a movie.
Rigged along each side of the ships, incandescent lamps attract giant squid near the surface, where they can be hauled from the ocean by long metal arms jutting over the water.

The coastguard cutter Río Cañete drifts within 100 metres of a squid jigger, and the men on each boat gaze at each other across the water.
The Chinese fishermen work in silence; the crew of the Peruvian boat is also hushed – none of them has witnessed such a scene before. 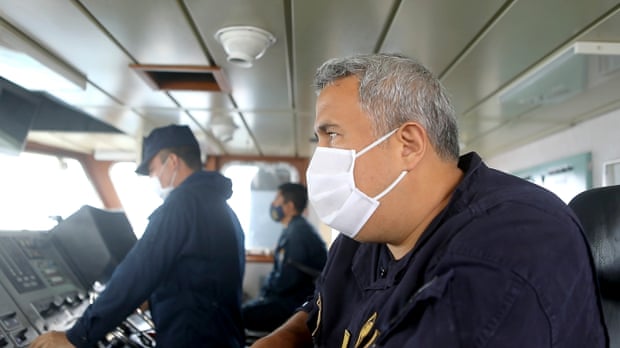 “This is just part of a considerable fleet off our coastal waters,” says Commander Eduardo Atkins, looking out from the bridge of the 55-metre patrol boat.

“They’ve always been off our coasts, from Ecuador to Argentina, [but ] this time there’s been more media attention and the public feel affected.
Our job is to dissuade them from entering our maritime domain.”

The Guardian recently joined the Peruvian coastguard on a four-day patrol into international waters which came amid growing tension over the presence of the huge Chinese fleet off the coast of South America – some of the richest fishing grounds in the world.
More than 250 Chinese ships were first detected in July as they skirted territorial waters off the Galápagos Islands, stirring outrage in Ecuador and raising global concern about the practices of the world’s largest distant-water fishing fleet.
Hawkeye 360, a radio frequency data analytics firm, reported that boats were “going dark” by switching off their AIS satellite tracking and entering the islands’ exclusive economic zone.

“We found multiple examples of maritime radio frequency activity that is within the Galápagos exclusive economic zone adjacent to the Chinese fleet,” said HawkEye 360’s CEO, John Serafini.
“These signals don’t align with any AIS tracking. Although the activity could represent legitimate vessels, at the very least it is suspicious behaviour,” he said.

Earlier that day, the Río Cañete heaved and shuddered through the machine-grey waves as a coastguard officer read out ships’ names from the radar scanner.

Commander Atkins steered the cutter south-west directly towards the cluster of Chinese vessels.
“We can clearly see the name of the ship Hangong Yu 303,” he said into a radiotelephone, reading out its coordinates on the ship’s bridge.

Then it came into view: the Hangong Yu 303 was a large red oil tanker, and it was refueling a smaller squid jigger, pipes connecting the two across the waves.
Atkins dispatched coastguard officers in one of the cutter’s two RIBs (rigid inflatable boat) to get a closer look, but the fishing boat quickly disconnected from the tanker and headed off in the other direction.

The Chinese ships regularly refuel on the open ocean in order to extend their voyage as long as possible, said Atkins.
“It’s not illegal but it’s considered bad practice,” he added through his white Covid face mask.
“They can be here for months and months, possibly changing their crews, but the boats remain here in the South Pacific.”

After more than 30 years with the coastguard, he could not hide his unease at the scale of the Chinese presence in the South Pacific, which has grown by roughly four times in nine years, according to Global Fishing Watch.

“They have factory boats which process the catch and the product arrives packaged and ready to eat in China,” he said.

It was one of these mother ships that Atkins wanted to find.
He could see Han Feng 806, a refrigerated container ship, or reefer, on the radar to the south-west but as he turned the cutter to give chase, the factory ship steered a course further out to sea.

Han Feng 806 stayed just out of reach.
The following day, Atkins changed course, steering east and then north, along the the 200-nautical mile limit of Peruvian waters.
The cutter’s twin 800 horsepower engines powered it smoothly along with the Humboldt current which swells up from Antarctica bringing nutrient-rich cold water along the coasts of Chile and Peru. 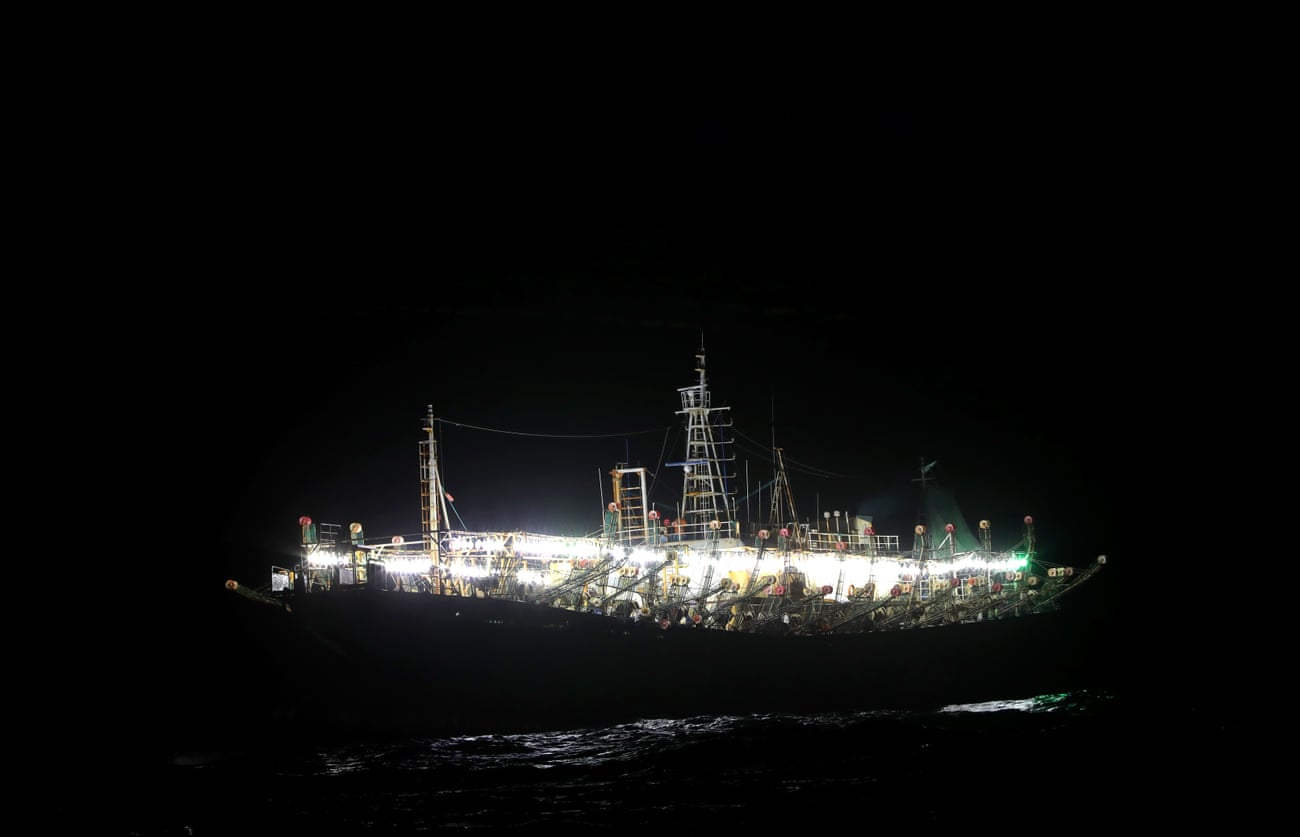 Fishing armada
The current gives its name to the species of giant squid which flourishes in its waters.

But there is genuine concern among local fishing associations that China’s harvesting of the Humboldt squid will inevitably hurt Peru’s fishery exports, of which the squid accounts for 43%.

“It’s an open secret that every year vessels mainly from China … come just at the edge of the 200-mile mark off Peru to extract this resource,” said Cayetana Aljovín, president of Peru’s National Fishing Society.

While South American countries impose quotas on their Humboldt squid catches, there are no limits on vessels in international waters.
About 800,000 tonnes of the fast-growing, highly migratory species are caught annually.

Overfishing of the squid could have an impact across the eastern Pacific, said Gustavo Sánchez, a marine biologist studying the species with Japan’s Hiroshima University.

“These squid might have more than a single genetic population cohabiting in the eastern Pacific waters, implying that overexploitation in international waters does not only mean fewer squid for Peru but also squid less resilient to environmental change over a more extended region,” he said. 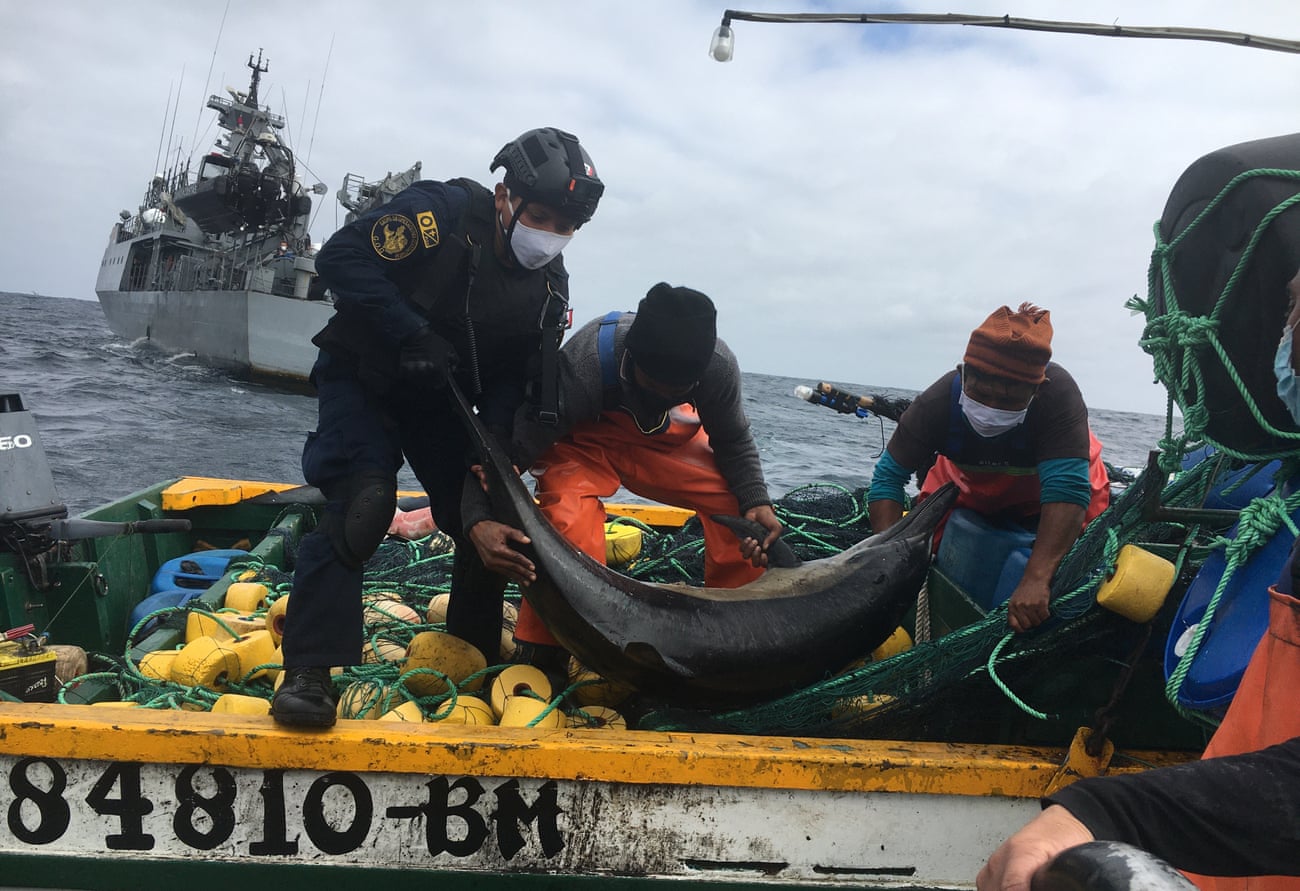 The Rosario
There was nothing on the horizon as the coastguard cutter surged forward under an overcast sky.
Petrels and shearwaters skimmed the swell and occasionally flying fish launched themselves before the bow.
A sperm whale spouted and then breached just two hundred metres from the ship, lifting spirits among the crew.
“It’s a good omen, boys,” Atkins pronounced.
Hours passed uneventfully before an officer with binoculars spotted something on the starboard bow.
Nearly 100 nautical miles from land a little white fishing boat bobbed on the ocean, so small it barely registered on the radar.
Atkins set a course towards it.
A mechanical arm lowered the eight-man RIB off the stern and armed coastguards climbed down to it from a rope ladder, ready to inspect the suspect craft.
The eight-metre Rosario had been drifting for two days with a broken outboard motor.
All that its four-man crew – two seasoned Peruvian fishermen and two younger Venezuelans – had left was a large bunch of bananas, a bag of buns and some bottles of Gatorade.
But what shocked the coastguard officers was the Rosario’s catch: hidden in nets stowed on the deck were four dead common dolphins, including one infant, and six sharks. 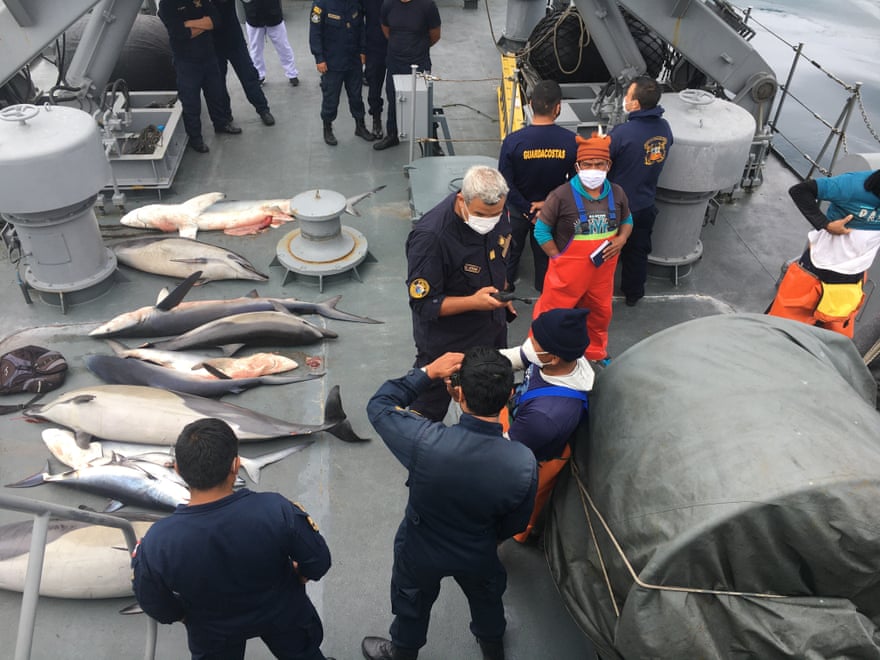 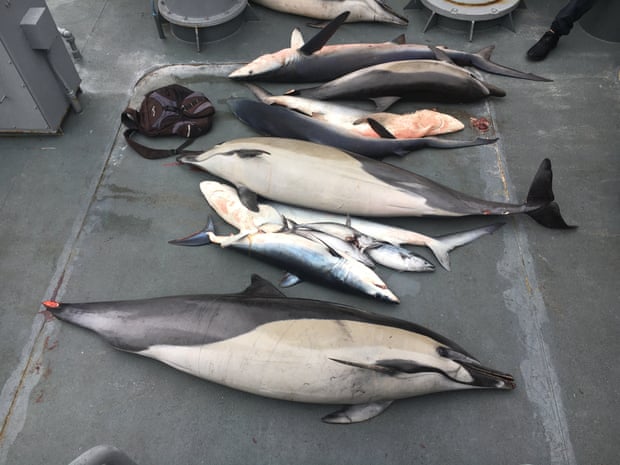 Among the catch were dolphins and sharks.
Photograph: Dan Collyns

Despite the mask over his face, it was clear that the skipper, Juan Ramos, knew he had been caught red-handed.
Catching dolphins and selling their meat is illegal in Peru, but butchered porpoises are used as shark bait or sold as a delicacy known as muchame or chancho del mar on the black market.

“Unfortunately we caught a few dolphins but that was not my intention,” Ramos, 52, said.
“If the motor was in good condition I would have got them out [of the net],” he insisted.
But the coastguards doubted his story: someone had cut the tail fins from two of the dolphins to stop them breaking out of the net.

Junior officer Nicolás Castro asked Ramos for his permits and port departure documents, but he had none.
Despite their predicament, Ramos, an old sea dog, said if they hoisted a sail they would be back in Ancón, their port of departure, in 12 days. 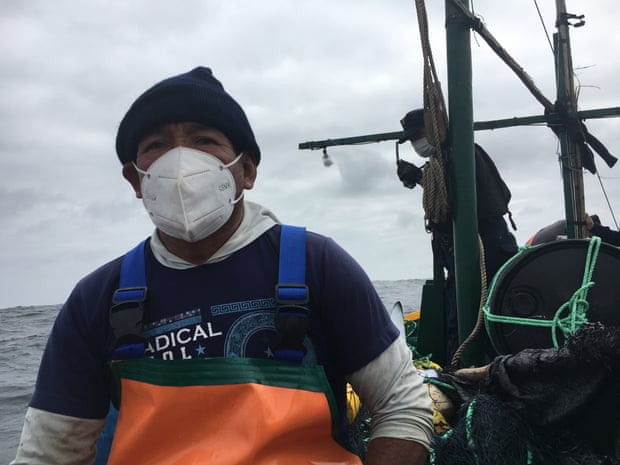 The skipper of the Rosario, Juan Ramos.
Photograph: Jorge de la Quintana
“Before, years ago, we fished there by the shore.
Now look where we are! If we fished by the shore now we wouldn’t catch anything,” he said.
“This all comes from bad globalization.
It’s not just the Chinese squid fishing boats, there are tuna fishing boats from other countries too, they come and break our nets.”
He said small-scale fishermen could not compete.
“The big problem in Peru is we don’t have the technology.
But [the foreign fleets] have factory ships, they can get anywhere and catch tonnes and tonnes [of fish] and take it away, processed.”
Advertisement
Matt Bjerregaard, a specialist in marine biodiversity and fisheries, said climate change is forcing artisanal fishermen to follow the fish into deeper water, further from shore.
Chinese fleet vessels illuminate sea near Galápagos to attract squid to the surface
But large foreign fishing fleets are also to blame, he said, forcing fishermen “to search for new fishing areas, take longer to find their catch and, in turn, this has a negative impact on their livelihoods”.
Despite the seizure, the boat’s net was still cast – and some 50 metres away a sea lion struggled to free itself.
Castro jumped on to the RIB clasping a kitchen knife and motored towards the stricken animal which thrashed wildly, entangling itself more.
“Come on, come on, you’ll be free soon,” said Castro, leaning over the bow to cut the green mesh as the sea lion bit furiously at a yellow float.
Castro struggled for 20 minutes until finally the net could be hauled over the animal’s head and it disappeared with a splash.
Footage shows Chinese fleet vessels transferring cargo in seas near Galápagos
“Go, go, be free, be free!” shouted Castro, brimming with emotion and trembling from the physical effort.
“How beautiful, damn it! I’m thrilled I was able to free it.”
It was an emotional end to the encounter.

The fishermen and their illegal catch were taken back to the Río Cañete to be taken to the harbour master’s office in port and probably fined; their catch would be examined by experts from the fishing ministry.
The Rosario and its broken motor was left adrift on the ocean.

Meanwhile, the controversial Chinese fleet continued to move south, prompting Chile to announce that its navy would monitor its movements.

“What began as an arrest for an illegal act became a search and rescue operation,” said Atkins – pleased the mission had a satisfactory ending, but perhaps frustrated that he had to be content with the small fry while the big fish got away.