'It's terrifying': can anyone stop China's vast armada of fishing boats? 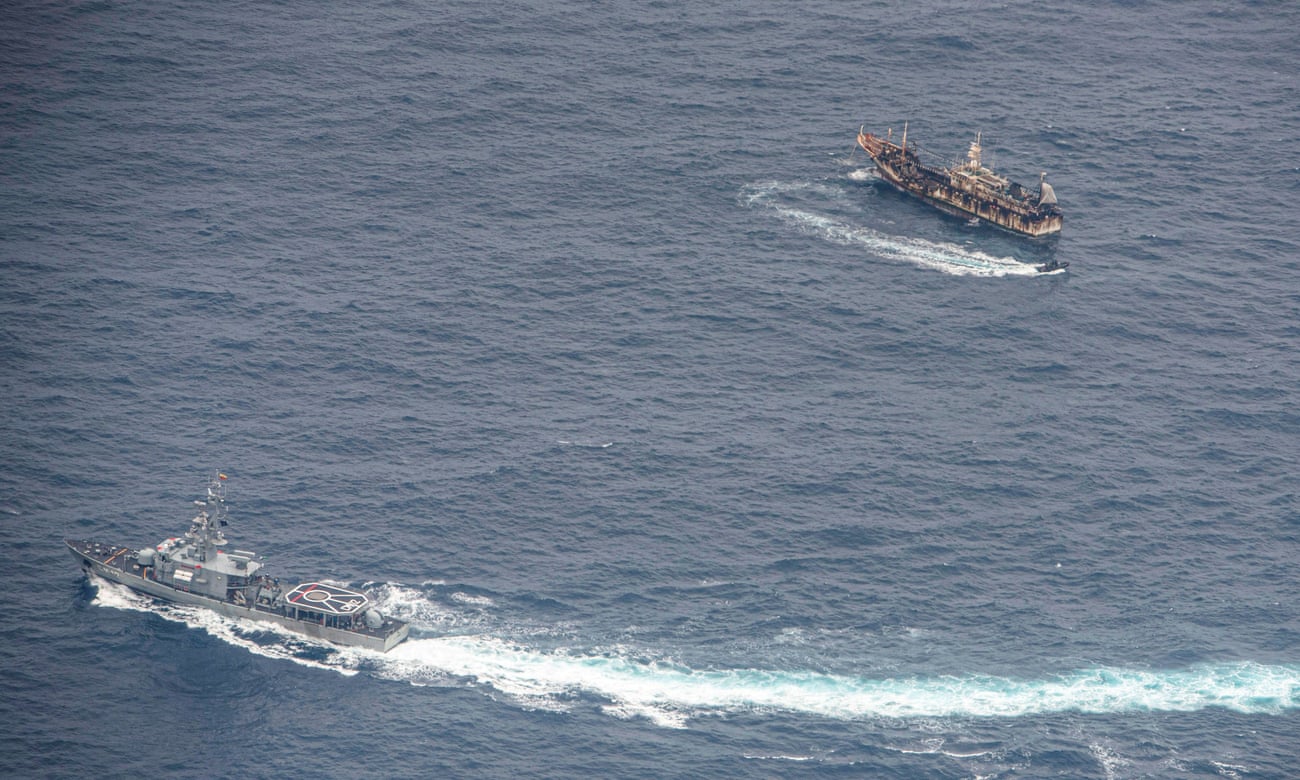 An Ecuadorian navy vessels challenges a fishing boat on 7 August after a fleet of mostly Chinese-flagged ships were detected in the Pacific Ocean.
Photograph: Santiago Arcos/Reuters

From The Guardian by Dan Collyns

Ecuador stood up for the Galápagos, but other countries don’t stand a chance against the 17,000-strong distant-water fleet

The recent discovery by the Ecuadorean navy of a vast fishing armada of 340 Chinese vessels just off the biodiverse Galápagos Islands stirred outrage both in Ecuador and overseas.

Under pressure after Ecuador’s strident response, China has given mixed signals that it could begin to reel in its vast international fishing fleet.
Its embassy in Ecuador declared a “zero tolerance” policy towards illegal fishing, and this week it announced it was tightening the rules for its enormous flotilla with a series of new regulations.

But with 325 of those 340 ships remaining off Ecuador, and local navy commander Darwin Jarrín saying last week that nearly half of those vessels had intermittently switched off their satellite communications – breaching the rules of the regional fisheries management organisation – the episode has shown how difficult it is for small nations to stand up to China’s distant fleet even when it descends on the archipelago that inspired Charles Darwin’s Theory of Evolution.

China’s vast fishing fleet, by far the world’s largest, has been overfishing seas much further from the world’s gaze than the islands known for their giant tortoises and iguanas.
From West Africa’s Gulf of Guinea to the Korean peninsula, the fleet has moved into the waters of other countries – switching off transponders to avoid detection, depleting fish stocks and threatening food security for often poor coastal communities.
In east Asia, fishing vessels may act as the vanguard of an aggressive geopolitical strategy aimed at asserting territorial claims. 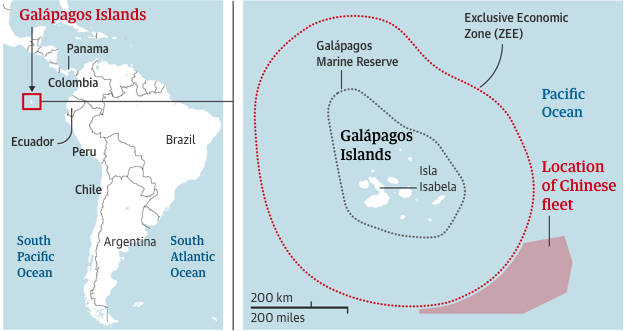 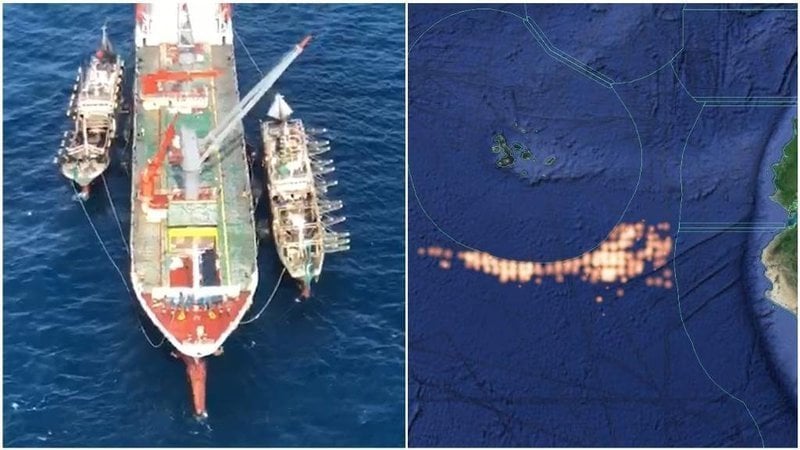 China’s new regulations this week include harsher penalties for companies and captains involved in illegal, unreported and unregulated – or IUU – fishing.
But conservationists monitoring the Galápagos episode are sceptical.

“Beyond this one-sided announcement, the problem remains the same,” says Pablo Guerrero, marine conservation director for WWF Ecuador.
“These boats operate without observers on board, they do not return to port, they transship their catch to mother vessels, which land the catch at ports.
So, in a nutshell, they are fishing all the time, the fishing operation doesn’t stop.”

The fleet is a vast and complex network.
Among the hundreds of vessels are fuel providers, fishing boats, tender boats and reefers, some of which camouflage unregistered boats, Guerrero says.
Many ships spend long periods at sea where shocking human rights violations have been reported.

NGO Global Fishing Watch and the Overseas Development Institute (ODI) thinktank have used cutting-edge technology and data analysis to reveal that the size and scope of China’s distant-water fleet has been hugely underreported. 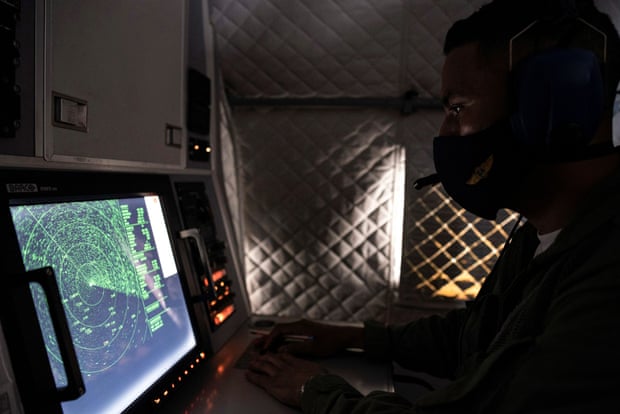 An Ecuadorian navy officer looks at a radar on 7 August after the mostly Chinese-flagged fleet was detected in an international corridor that borders the Galápagos Islands.
Photograph: Santiago Arcos/Reuters

The ODI found the fleet had 16,966 vessels, five times more than previous estimates.
By contrast, the US distant-water fleet comprises 300 boats.

“We were shocked by the results because we were expecting 4,000 or 5,000 vessels,” says Miren Gutiérrez, the lead author of the ODI report.

The research, which took more than a year, also found nearly 1,000 of the boats were using “flags of convenience” and at least 183 vessels were involved in suspected IUU fishing, for which China ranked the worst-performing nation in a 2019 global index.

“On the surface, it looks like a very fragmented fleet, but we suspect the core of it is probably in the hands of a few companies,” says Gutiérrez.
Recent research shows the Chinese government heavily subsidises fishing through tax exemptions, mostly on fuel, to the value of $16.6bn (£12.6bn) per year, or 47% of total global fishing subsidies.

“Most of this overfishing is not illegal, that’s the problem,” Gutiérrez says, as most of it goes on in international waters.
Most of the fleet’s vessels are trawlers – banned within China’s territorial waters and notorious for damaging ecosystems by dragging nets along the seafloor.
Other common boats are longliners, for larger fish such as tuna or shark, and squid-jiggers, which usually operate in deeper waters.

“To shift the dynamic there needs to be radical transparency,” says Philip Chou, an expert on distant-water fishing at Oceana, a marine conservation group.
“So far, the evidence has not shown that [the Chinese government] has taken it further than rhetoric.”

China would need to open up about its catch, the real-time location of its fleets, the ownership of fishing vessels, and the opaque bilateral or regional agreements it has made with low-income coastal nations, Chou says.
In west Africa, for example, a 2018 report by the Environmental Justice Foundation found 90% of Ghanaian-flagged vessels had Chinese involvement. 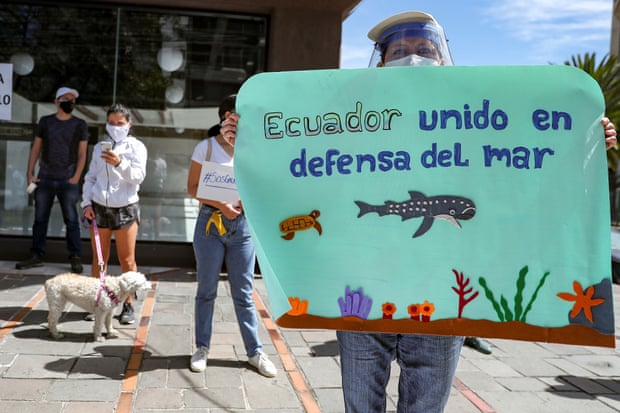 China’s self-declared shake-up proposes changes to high-seas transshipment rules – the movement of cargo from one vessel to another – along with reforms to distant-water fishing.
It also announced two three-month fishing moratoriums: one west of the Galápagos, between September and November, and another beginning in July in the south Atlantic near Argentina.

The world’s biggest seafood exporter is also mooted to be planning to ratify the Port State Measures Agreement, the first internationally binding accord in which ports around the world pledge not to allow illegal or unregulated fishing boats to land catches.

'They just pull up everything!' Chinese fleet raises fears for Galápagos sea life
“It’s a significant concession,” says Steve Trent, executive director of the Environmental Justice Foundation.
“But in the context of global fisheries it’s not enough, it’s not nearly enough.”

China hauled up about 15% of the world’s reported fishing catch in 2018, according to the UN fisheries agency, more than twice the second- and third-ranking countries.
But the lack of transparency means it is impossible to truly know how much seafood humans take from the ocean amid an alarming drop in marine life in the past half-century.

The UN’s Food and Agriculture Organization (FAO) estimates that illegal fishing has an annual cost of up to $23bn.
The FAO also calculatesd that nearly 60 million people worked in fishing or aquaculture in 2016, 85% of them in Asia.

Ecuador is one of a few small nation states that have pushed back against the Chinese flotillas.
In the hotly disputed South China Sea, Indonesia sent F-16 fighter jets along with navy, coastguard and fishing boats to repel 63 Chinese fishing boats and four coastguard vessels from its waters in January. 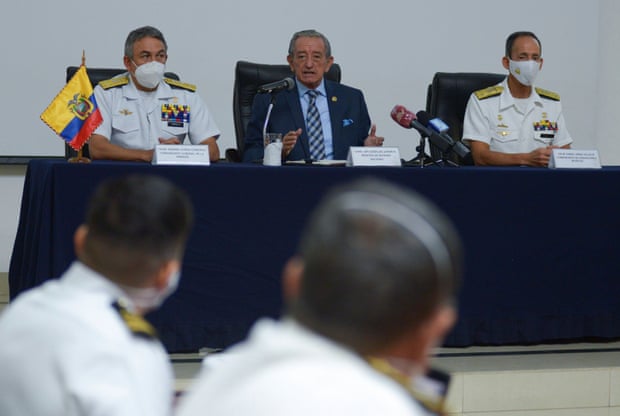 Ecuador’s defence minister, Oswaldo Jarrin, flanked by navy admirals, at a press conference, in the port city of Guayaquil, about the Chinese fleet operating near the Galápagos Islands.
Photograph: Reuters

But North Korean fishing boats may have come off worse from exchanges with China’s “dark fleets”, amid reports of “ghost boats” washing up on Japanese shores containing the bodies of North Korean fishermen.
In its backyard, the Chinese fleet has a fearsome reputation for systemic illegal fishing and aggressive tactics when faced with competitors or foreign patrol vessels.

China signed a key UN fish stocks agreement in 1996 but never ratified it.
It is a member of seven regional fishery management organisations, or RFMOs, but its distant water fleet operates outside of those frameworks, says Mercedes Rosello, director of House of Ocean, a not-for-profit legal consultancy that monitors IUU fishing.
“When you are looking at thousands of vessels, the rules and mechanisms which that flag state adopts are of huge transcendence,” Rosello says.

The US, Japan, and the EU, which make up about 70% of the global seafood market, need to take proactive measures to disrupt IUU fish from Chinese vessels from entering international supply chains, says Trent.

“[Without] wholescale structural change by China and the system of global governance of the ocean to make sure the Chinese do abide by the law,” he says, the world’s fish stocks would continue their precipitous decline.
“The people who suffer first and worst are almost always the coastal communities who rely on those fisheries for their survival, wellbeing and food,” he says.
“Exactly what happens in the Galápagos [Islands] happens in locations around the world and it’s terrifying.”