Holed up during COVID-19 restrictions in Queensland, amid an endless cycle of "wake up, check the phone, work, eat, sleep, repeat", Mike Swaine hatched a plan to escape.

The Sunshine Coast adventurer and his mate Joel decided to bunnyhop their way 300 nautical miles up the Queensland coastline from the Sunshine Coast to Great Keppel Island on a 17-foot Hobie Cat.

"I probably wouldn't have done it if COVID-19 hadn't hit," Mr Swaine said.

Over six days the two men were at the mercy of Mother Nature — at times nearly capsizing in brutal, 30-knot gusts with fully sheeted sails to zero wind and a dead motor in the dark.

"And you know, out in this little floating deckchair, that far out at sea is pretty sketchy," Mr Swaine said.

Powered primarily by wind, with no quarters below deck, riding on a Hobie Cat means feeling every wave and movement of the ocean.

The small catamaran was a somewhat unusual choice of vessel for such a long, multi-day journey, but with international and interstate travel off the cards, Mr Swaine wanted to find a new way to explore his home state.

"We're so lucky up here in Queensland that we still have a freedom in so many ways," he said.

"And we took advantage of that and our little catamaran got us to see our beautiful coastline."
An escape from lockdown

Swaine (L) with mate Joel Schulz, says the vessel's name, 'Betsy — the Ruby Princess', was a tribute to his grandmother — and the pandemic.(Supplied: Mike Swaine)
Mr Swaine is an aerial photographer by trade but when the pandemic hit, his interstate travel was ground to a halt.

Seeking an escape, he embarked on lengthy YouTube binge sessions — watching marine adventurers from around the world.

It was in those binge sessions that the idea for his own Hobie Cat adventure was born.

Travel restrictions as a result of COVID-19 left aerial photographer Mike Swaine with more time to ponder other types of adventures.(Supplied: Mike Swaine)
Experienced on the water, but not a sailor, Mr Swaine put plans in motion to sail the 17-foot Hobie Cat from south-east to central Queensland.

His mate Joel Schulz, aka the 'Coastal Cowboy', needed no convincing to be his right-hand man.
'Betsy the Ruby Princess' 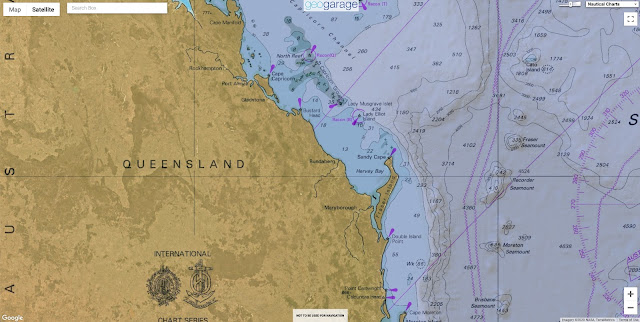 Visualization with the GeoGarage platform (AHS nautical raster chart)
The amateurs equipped themselves with sailing information via YouTube videos and gathered the necessary safety equipment.

"We didn't take that lightly and we didn't take having to get rescue services lightly," Mr Swaine said.
"We had three EPIRBs [Emergency Position Indicating Radio Beacons] and we had radios and we had contingency plans in place."

With the bare essentials on board, they set sail on 'Betsy, the Ruby Princess' — named out of "respect" of the pandemic.

Joel Schulz, the 'Coastal Cowboy', was excited to go along for the ride.(Supplied: Mike Swaine)
Stuck in the dark to frolicking dolphins

They hoped for idyllic conditions but at times feared for their lives.

"There was, at one point, a Big Woody Island and in between Fraser Island and Hervey Bay when the boat turned into the wind [30 knot gusts] and the waves started coming over, we had no methodology of power and we had to try and jibe the boat," Mr Swaine said.
"We couldn't pull the jib out to turn the boat around because the wind was so strong, but as soon as we turn beam onto the wind, the boat would capsize.
"That was a point where there's a split second you're like, 'Man this is actually really serious, we have to take this seriously, we have to respect the ocean'."

The pair faced challenging conditions along the way.(Supplied: Mike Swaine)
As they headed north, the wind not only eased but stopped completely as they approached Bustard Head at dusk.

Mr Swaine said it was a "scary experience", exacerbated when Mr Schulz accidentally dropping the anchor overboard — without a line attached.
"So we're like, 'OK', we had a little two-horsepower motor, we fired up the motor, and then the motor went for a while — then the motor stops," Mr Swaine said.
"There's some rocky shoals where the waves are breaking, it was biggish surf by that stage, it'd dropped a little bit.
"But it was very uncomfortable and floating around in this little boat in the dark, it was a scary experience."

But then there was the flip side — being able to pull into any beach, seeing the moon and sun rise each day and the joy of watching dolphins and whales dance around the boat.

Swaine says pulling up to any beach for the night was a highlight of the trip.(Supplied: Mike Swaine)
"We had a whole heap of dolphins come up and start jumping around the boat," Mr Swaine said.
"One came right up next to the boat and was just looking at us.
"It was inquisitive, trying to trying to figure out what what these two idiots are doing, not quite the middle of the ocean but, a long way out at sea on a little Hobie Cat."
A 'magical place'

Mr Swaine said staying calm — with a sense of humour — enabled the pair to make good decisions and arrive at their destination safely.

"We came on the inside of Great Keppel and all of a sudden the wind stopped, the swell stopped and it was just this magical place," he said.
Mike Swaine says if it wasn't for COVID-19, his Queensland coastal adventure wouldn't have happened.
"We pulled up and this guy came down and he's like, 'Oh, where are you from?' and we said 'the Sunshine Coast' and he just thought we're all having a joke.
"He was really surprised. I think we were equally surprised that we actually made it."

Mr Swaine said that the expedition took its toll.
"[It was] hard on the body, I have blistered lips and hands, constant fear in your mind — particularly on a stretch with land barely visible but [it was] totally, absolutely worth it," he said.