From National Geographic by Roff Smith

Researchers make haunting discoveries while peering deep inside H.M.S.
Terror, one of two ships lost during the ill-fated Franklin expedition.

“The ship is amazingly intact,” says Ryan Harris, the lead archaeologist on the project.
“You look at it and find it hard to believe this is a 170-year-old shipwreck.
You just don’t see this kind of thing very often.”

Discovered in 2016 in icy waters off King William Island in Canada’s far north, the shipwreck hadn’t been thoroughly studied until now.
Taking advantage of unusually calm seas and good underwater visibility, a team from Parks Canada, in partnership with Inuit, earlier this month made a series of seven dives on the fabled wreck.
Working swiftly in the frigid water, divers inserted miniature ROVs through openings in the main hatchway and skylights in the crew’s cabins, officers’ mess, and captain’s stateroom.
(Here's the mysterious clue that led to the discovery of the H.M.S. Terror.) 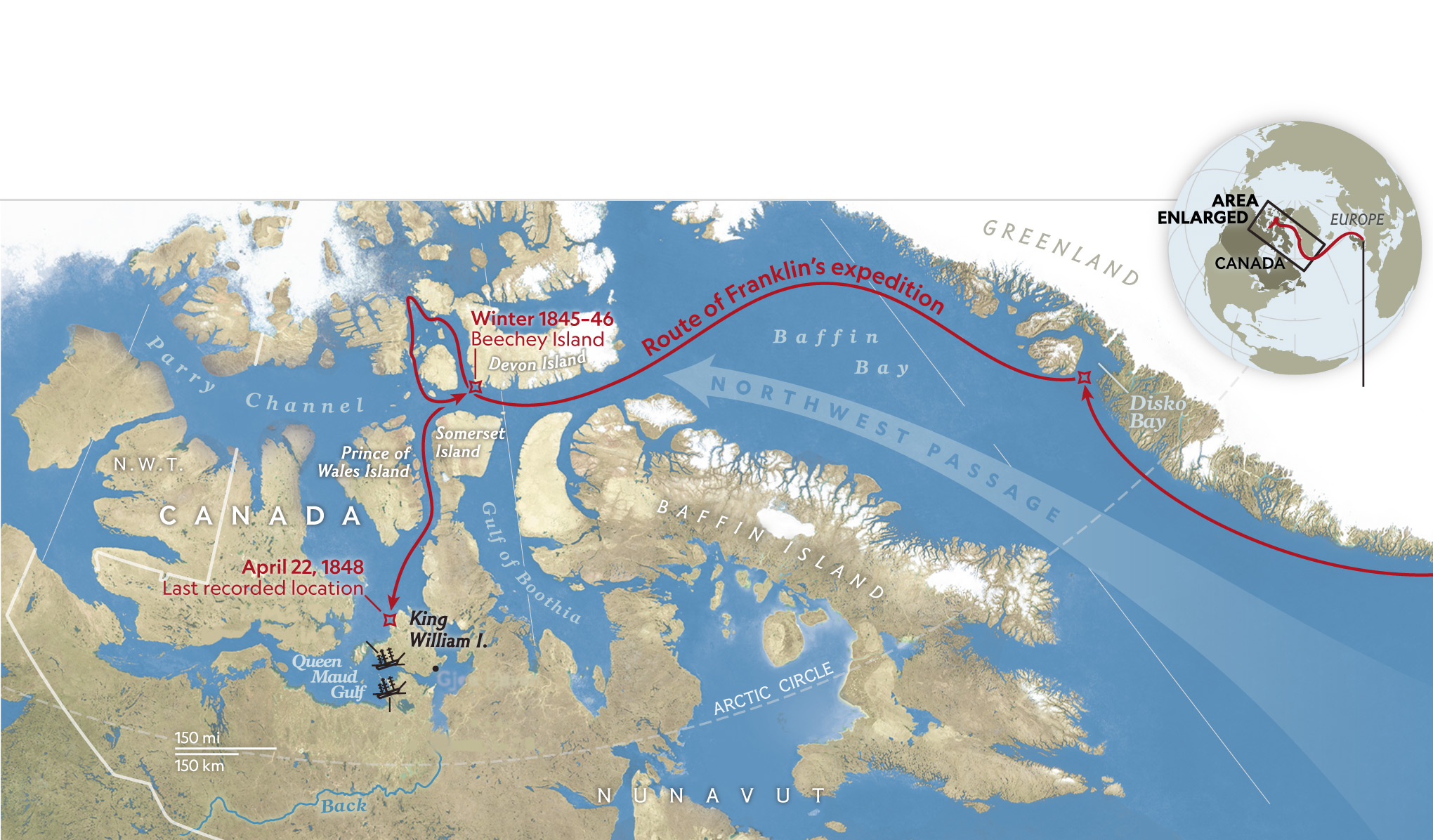 Lost and found
Deep in the Canadian Arctic, Franklin’s ships were trapped in sea ice for 19 months.
Survivors set out on foot but were never heard from again.
Archaeologists hope the sunken ships, located in 2014 and 2016, will yield answers.


“We were able to explore 20 cabins and compartments, going from room to room,” says Harris.
“The doors were all eerily wide open.”

What they saw astonished and delighted them: dinner plates and glasses still on shelves, beds and desks in order, scientific instruments in their cases—and hints that journals, charts, and perhaps even early photographs may be preserved under drifts of sediment that cover much of the interior.

“Those blankets of sediment, together with the cold water and darkness, create a near perfect anaerobic environment that’s ideal for preserving delicate organics such as textiles or paper,” says Harris.
“There is a very high probability of finding clothing or documents, some of them possibly even still legible.
Rolled or folded charts in the captain’s map cupboard, for example, could well have survived.”

The H.M.S. Terror and Erebus were state-of-the-art naval vessels in 1845, when the Franklin expedition embarked from Britain.
Photograph by Illustrated London News, Getty

The only area below decks the team was unable to access was the captain’s sleeping quarters.
Apparently the last person to leave closed the door.
“Intriguingly, it was the only closed door on the ship,” says Harris.
“I’d love to know what’s in there.”

Just as tantalizing is the possibility that there could be pictures of the expedition awaiting discovery.
It’s known that the expedition had a daguerreotype apparatus, and assuming it was used, the glass plates could still be aboard.
“And if there are, it’s also possible to develop them,” says Harris.
“It’s been done with finds at other shipwrecks.
The techniques are there.”

Plates remain on shelves, as if ready for the next meal.
Silt covers much of the…
Photograph Courtesy Parks Canada, Underwater Archaeology Team

The fate of the Franklin expedition has been one of history’s great mysteries.
(See relics from the lost expedition.)

What’s known is that Sir John Franklin set sail in May 1845 with a crew of 133 men and orders to discover the Northwest Passage—a goal that had eluded explorers for centuries.

Then as now, geopolitics was a driving force in Arctic exploration, with the Royal Navy wanting to secure the fabled shortcut to the Pacific ahead of the Russians, who had maritime aspirations of their own.
With this in mind no expense was spared.

Franklin was given command of two state-of-the-art ships, Erebus and Terror, both equipped with stout, iron-sheathed hulls and steam engines, as well as the finest scientific equipment and enough food and supplies for three years in the high Arctic.
It was one of the best equipped and best prepared expeditions ever to leave Britain’s shores.

After brief stops in Scotland’s Orkney Islands and Greenland, the two ships set off for Arctic Canada in hopes of picking their way through its labyrinth of straits and bays and islands and eventually reaching the Pacific Ocean.
The last European eyes to see the ships were the crews of two whaling vessels who encountered Erebus and Terror in late July 1845, on the crossing from Greenland to Canada’s remote Baffin Island.
After that they were never seen or heard from again.

As years passed with no word of the expedition, search parties were sent out.
Over time the discovery of skeletons and discarded equipment—as well as disturbing evidence of cannibalism—made clear that the expedition had met with disaster.
But how and why has remained a mystery.

A brief note found under a cairn gives a bit of the story.
Dated April 1848 and signed by Francis Crozier—captain of the Terror, who by then had taken command of the expedition—it stated that the ships had been locked in ice for a year and a half, that 24 of the men were already dead—including Franklin—and that Crozier and the other survivors planned to attempt to walk overland to a remote fur-trading outpost hundreds of miles away on the Canadian mainland.
None of them ever arrived.

What caused such a well-equipped expedition to go so badly wrong remains a mystery.
But in recent years the two biggest pieces of the puzzle—the ships themselves—were discovered: Erebus in 2014, lying in 36 feet of water off King William Island, and Terror two years later, found in a bay about 45 miles away, in 80 feet of water and largely intact.

H.M.S. Terror, one of two ships from the doomed Franklin expedition, was discovered in 2016 off King William Island in the Canadian Arctic.
The small expedition boat seen here sank along with the Terror and rests on the seafloor a short distance from the ship.
photo : Thierry Boyer, Parks Canada

Why the ships ended up so far apart, which one went down first, and why and how the ships sank are questions archaeologists hope to answer.

“There’s no obvious reason for Terror to have sunk,” says Ryan.
“It wasn’t crushed by ice, and there’s no breach in the hull.
Yet it appears to have sunk swiftly and suddenly and settled gently to the bottom.
What happened?”

Teasing out the answers won’t be easy, even with such a bounty of artifacts.
There are plans to excavate both wrecks, but it will be a slow process requiring years.

“Diving up here is extremely difficult,” says Ryan.
“The water is extremely cold, making it impossible to stay down for very long, and the diving season is short—a few weeks if you’re lucky, a few days if you’re not.”

Even so, this season’s work on Terror has already provided some tantalizing clues that will help researchers develop a chronology of the disaster.

“We noticed the ship’s propeller still in place,” says Ryan.
“We know that it had a mechanism to lift it out of the water during winter so that it wouldn’t be damaged by the ice.
So, the fact that it’s deployed suggests it was probably spring or summer when the ship sank.
So, too, does the fact that none of the skylights were boarded up, as they would have been to protect them against the winter snows.”

No doubt there are a lot more answers lying beneath the sediment in those cabins, says Ryan.
“One way or another, I feel confident we’ll get to the bottom of the story.”