The changing face of e-navigation

During his presentation at 2019 SAFETY4SEA Hamburg Forum, Capt. Mark Bull, Director, Trafalgar Navigation, gave an insight concerning e-navigation, pointing out that we are on the threshold of a major change in our industry; it has already started and it is now picking up speed.

Good afternoon, risk and safety.
In 1997, the worst peacetime maritime disaster occurred and that was the collision between the tanker Vector and the passenger roll on roll of ferry Doña Paz.
4,387 people lost their lives the vast majority were burnt alive in the water where they ended up after the two ships collided.
In 2012, the Costa Concordia incident occurred, and it cost the insurance industry an excess of 1 billion dollars just to remove the wreck.
Groundings have resulted in massive pollution incidents.
We can start with the Torrey Canyon and move on to Exxon Valdes, the Braer, the Sea Empress, the list is never ending but it has cost the industry dearly.
So, they are all results of navigational accidents.
Navigation has been practiced for years, but in the last two or three years the face of navigation is changing considerably.

A ship’s bridge traditionally consisted of a chart room and the wheelhouse.
Later this changed slightly to a wheelhouse with a chart space.
Officers would then move backwards and forwards between the two places for plotting the ship’s position and checking the progress of the ship.
Now with the introduction of ECDIS, which is located in the wheelhouse and the transfer of other instruments to the forward console, the chart space is becoming redundant.

There are many designs of bridges; a typical one now incorporates ECDIS and the ARPA display side by side, occasional bridges have an integrated bridge screen display in the center.
The latest navigation; bridges are rapidly approaching the appearance of an aircraft cockpit.
However, we still have on the deckhead various displays which are prescribed by regulation in SOLAS, but perhaps would be better being re-located.
There is another problem with this type of bridge and that is total internal reflection, which, depending upon where you are stood may affect.

Nowadays, we use the terms “back of bridge” and “front of bridge2 and not charts space because there are no more charts.
There are all contained in the ECDIS as NCs - electronic navigation charts.
As you can see from the slide there are still instruments on the wooden bulkhead but otherwise that place is unused.

Here is an example of what navigation looks like in practice; that display shows three independent navigation systems displayed simultaneously at the same time.
The first one is GPS position, following the track is mapped on the ENC and the little black dots behind are the records of where the ship was; the brightly yellow color is known as the radar overlay and marked on the ECDIS alone but not measured there is a blue dotted line which is the parallel index line. 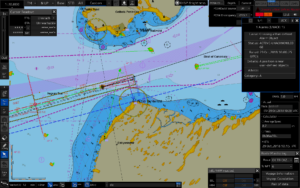 The fourth and final system is visual when we can see things.
Because for years, we have been trying to resolve the problem of bad visibility by radar and we now have so much experience with radar, that I argue strongly and with many senior captains that visual means of navigation instrumentation has now been replaced by instrumentation navigation.

GPS and radar are two continuous positioned monitoring systems, so that if one fails, we just continue with the other one, it’s not a big deal. 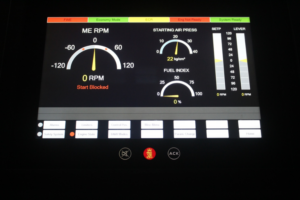 Nowadays, digital displays are very clear.
Slowly manufacturers are introducing these displays with exceptionally good clarity enabling an officer of the watch, a pilot or a master to see at a glance the information he/she requires.

The following is a digital analog display of the engine controls.
Notice the clarity here.
It would be so good if we could get all information displays to be the same.
It would make the life of the Master, OOW or pilot so much easier.
Instead of having to run around to find this information in the bridge, if it’s put in the right place, they can stay in one location and monitor the situation continuously.
(Improved situational awareness?)

Nowadays, we even have course recorders that do not have paper but the manufacturers have adopted them so you can write on the screen and then download it to a USB stick.
We also have bridge wing cameras allowing the navigation bridge to be smaller and with simpler construction to save a lot of money.
Also, in the old days we used to have books on the bridges sailing directions, light lists, radio signals.
Today these are all digital.

The benefits are huge, with massive cost reductions in both construction and maintenance.
But the increased benefit provided by hugely improved situational awareness is much, much more and unquantifiable in costs.
The navigator now has more information at his fingertips to make informed decisions.
We need to be very careful because there are regulations in existence that will stop progress.
There are regulations about locating instrumentation on the deck head which is no longer required if we design our bridge correctly and of course, we need to consider the layout and the construction of the bridges itself.

You can see from this photograph there are some clear problems.
It is so bad that the helmsman has to stand in front of a radar to steer the ship. 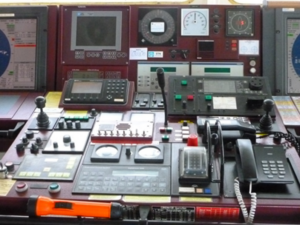 and here trying to just operate equipment, this officer can barely reach the instrument at the back of the chart table, and she had great problems reaching one on the central bridge console.
Absolutely madness in design.

In light of the above problems, some companies are now investing a lot of money in navigation for a more ergonomically efficient bridge with the object to enhance safety of navigation and avoid groundings, collisions, ice damage and heavy weather damage.

Above text is an edited version of Capt. Mark Bull’s presentation during the 2019 SAFETY4SEA Hamburg Forum.
You may view his presentation here.
Posted by geogarage at 1:54 AM