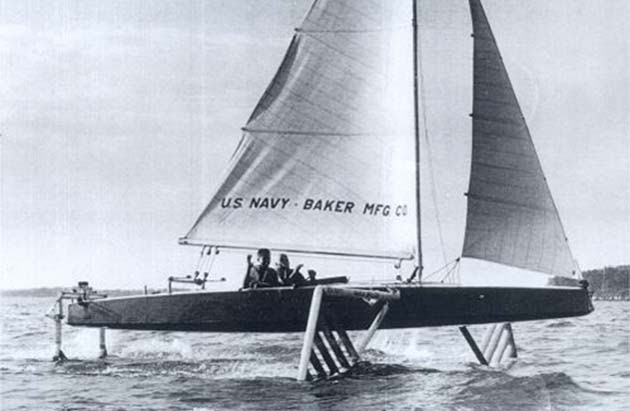 Gordon Baker developed and tested 'MONITOR' in the 1950’s.
A monohull with outrigger foils could get up on the foils in about 13 knots of wind and sail at about twice the true wind speed.
Top speed was reported at over 30 knots, with some reports claiming 40 knots.
At 40 knots, cavitation would probably have set in.
Baker's future designs employed two main wing sails which the 3D animation video shows.
To think it took over 65 years for this technology to be evolve to The America's Cup almost seems a tragedy. 'Monitor' is on display at the Mariners’ Museum in Newport News, Virginia.

1950`s sailing hydrofoil Monitor 3D model, of what she became and what she was intended to be. Originally the designers intended a dual wingsail version but it was too expensive.
Imagine if they would have had the money they would have built in 1955 - a sailing hydrofoil - with wingsails - with a mechanical computer, stabilizing it - foils from sophisticated alloys - high speed sailing 40kn´s