The ATSB investigation of the grounding of the Australian Border Force Cutter (ABFC) Roebuck Bay on Henry Reef has revealed underlying safety issues with the effectiveness of ECDIS type-specific training, ECDIS software updates and the use of a single point feature to represent relatively large physical features on electronic navigational charts.

The newly-released Australian Transport Safety Bureau (ATSB) investigation of the grounding of the Australian Border Force Cutter (ABFC) Roebuck Bay on Henry Reef has revealed underlying safety issues with the effectiveness of ECDIS type-specific training, ECDIS software updates and the use of a single point feature to represent relatively large physical features on electronic navigational charts. 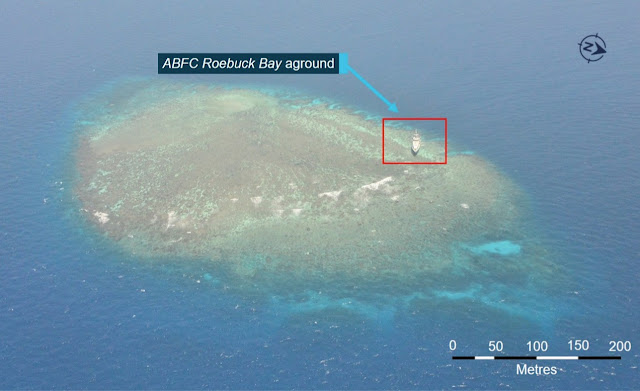 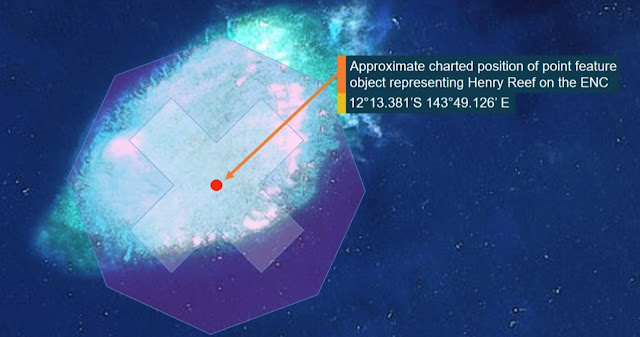 Charted position of Henry Reef point feature object on ENC
Image showing the charted 'point' position of Henry Reef as encoded in the ENC in relation to the actual reef. Note that the relative size of the isolated danger symbol to the reef is approximate only and that on the ECDIS display, the isolated danger symbol always displays at its standard size of about 7 mm regardless of scale.
Source: DigitalGlobe, Esri, modified and annotated by the ATSB

On September 30, 2017, shortly after midnight, the ABFC Roebuck Bay grounded on Henry Reef in the Great Barrier Reef, Queensland.
The cutter was on a passage from Saibai Island in the Torres Strait Islands archipelago bound for Lizard Island, located about 71 nautical miles south-east of Cape Melville. 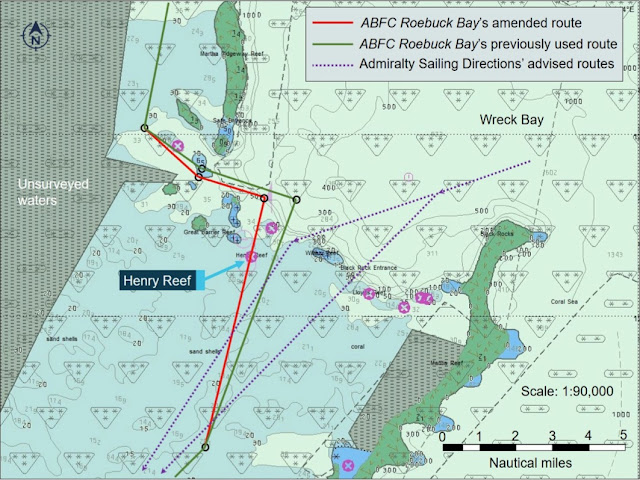 The cutter sustained substantial damage to the keel, stabilizer fins and propellers, with hull breaches near the storage void and tank compartment spaces.
There were no reported injuries or oil pollution. 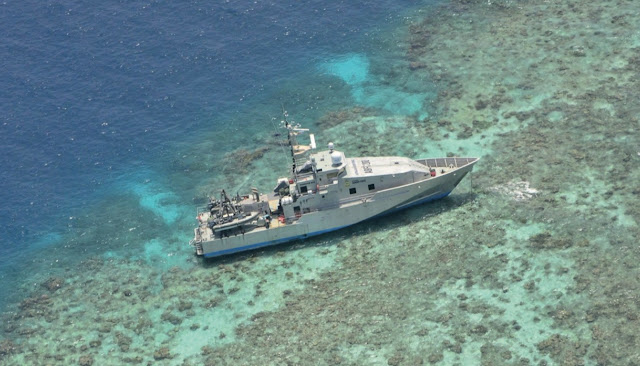 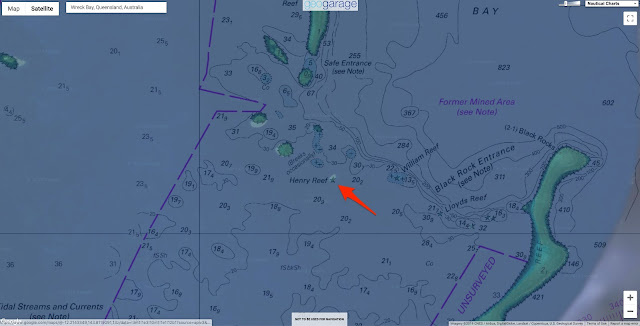 Images show AHO survey data (left), section of ENC AU413143 (centre) and ENC AU413143 superimposed on survey data at compilation scale (right).
Source: Australian Hydrographic Office, modified, annotated and superimposed by the ATSB
The ship’s electronic chart display and information system (ECDIS) identified the reef as a danger to the planned route, however, the crew did not identify the danger either visually or by using ECDIS.
The vessel continued on the amended route and grounded on Henry Reef just after midnight.
There were no reported injuries or oil pollution, but the vessel sustained substantial damage.

The ATSB found the crew’s ability to check the amended route was limited as their training was not effective in preparing them for the operational use of their on board ECDIS. 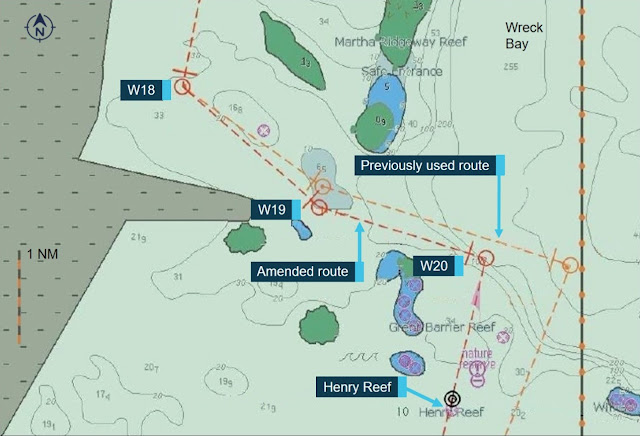 Image from ABFC Roebuck Bay’s ECDIS display, taken after the grounding, showing the previously used route (orange) and the amended route (red) based on the changed waypoints, W19 and W20.
Source: Australian Border Force, modified and annotated by the ATSB 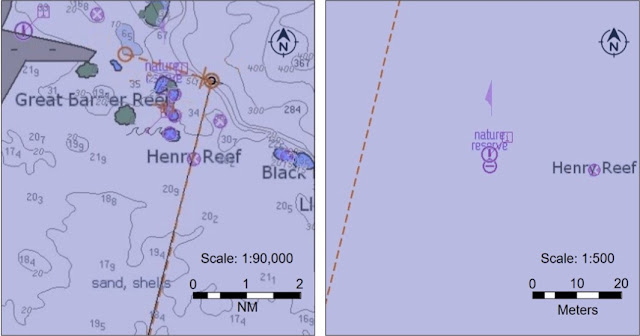 The ATSB says the investigation highlights that the safe and effective use of ECDIS as the primary means of navigation depends on operators being thoroughly familiar with the operation, functionality, capabilities and limitations of the specific equipment in use on board their vessel.
“ECDIS type-specific training needs to be designed, delivered and undertaken so operators have the required knowledge to confidently operate ECDIS as intended by the manufacturer,” ATSB Chief Commissioner, Greg Hood said.

The ATSB also found the vessel’s ECDIS was not updated to the latest International Hydrographic Organization (IHO) standards and lacked the enhanced safety features of a new presentation library of symbology.

The ATSB reminds regulators, manufacturers, hydrographic offices and other concerned parties that their ultimate goal must be to eliminate the significant risks with the use of ECDIS or at least reduce them to an acceptable level in terms of navigational safety.
“Like all on-board equipment, ECDIS needs to be maintained and compatible with the latest applicable standards,” Mr Hood said.
“With the recent introduction of ECDIS as the sole means of marine navigation and the replacement of paper charts, the grounding was an opportunity for the ATSB to explore any potential safety impact of ECDIS in a real-world operational environment.”

The investigation involved interviews with Australian Border Force officers, crew and shore staff and hydrographers from the Australian Hydrographic Service and the ECDIS manufacturer.
Extensive ECDIS analysis was also carried out, as was various ECDIS simulations and testing.

“As a result of the investigation, the ATSB considers the use of point features in electronic navigational charts to represent areas of relatively significant size on the earth’s surface is likely to increase the risk of the hazard posed by such features being misinterpreted and potentially reduce the effectiveness of ECDIS safety checking functions,” Hood said.
“While this did not specifically contribute to the grounding of Roebuck Bay, the investigation has shown that the implementation of ECDIS has introduced some unintended risks to marine navigation.”

Image shows ENC AU413143 centred on Henry Reef, at a scale of 1:40,000 on a VisionMaster FT ECDIS, demonstrating text and symbol overlap.
Note that all text is on display as required by the Annex A - ECDIS start-up checklist.
Source: Electrotech and ATSB 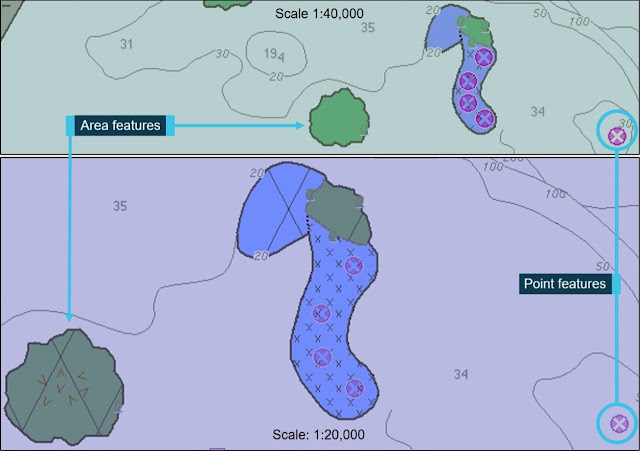 Comparison of area features and point features at different scales

The images demonstrate a key difference between area features, which change size proportionate to the scale at which the ENC is being viewed, and point features, which remain the same size regardless of scale.
The top picture is at scale of 1:40,000 and lower picture is at 1:20,000.
Source: Electrotech, modified by the ATSB

ECDIS is a complex software-based system and the ATSB acknowledges the many challenges faced in its design, manufacture, and operation to ensure navigational safety.
“The ATSB safety message from this investigation reminds regulators, manufacturers, hydrographic offices and other concerned parties that their ultimate goal must be to eliminate the significant risks with the use of ECDIS or at least reduce them to an acceptable level in terms of navigational safety,” Mr Hood said.

The report is available here / investigation