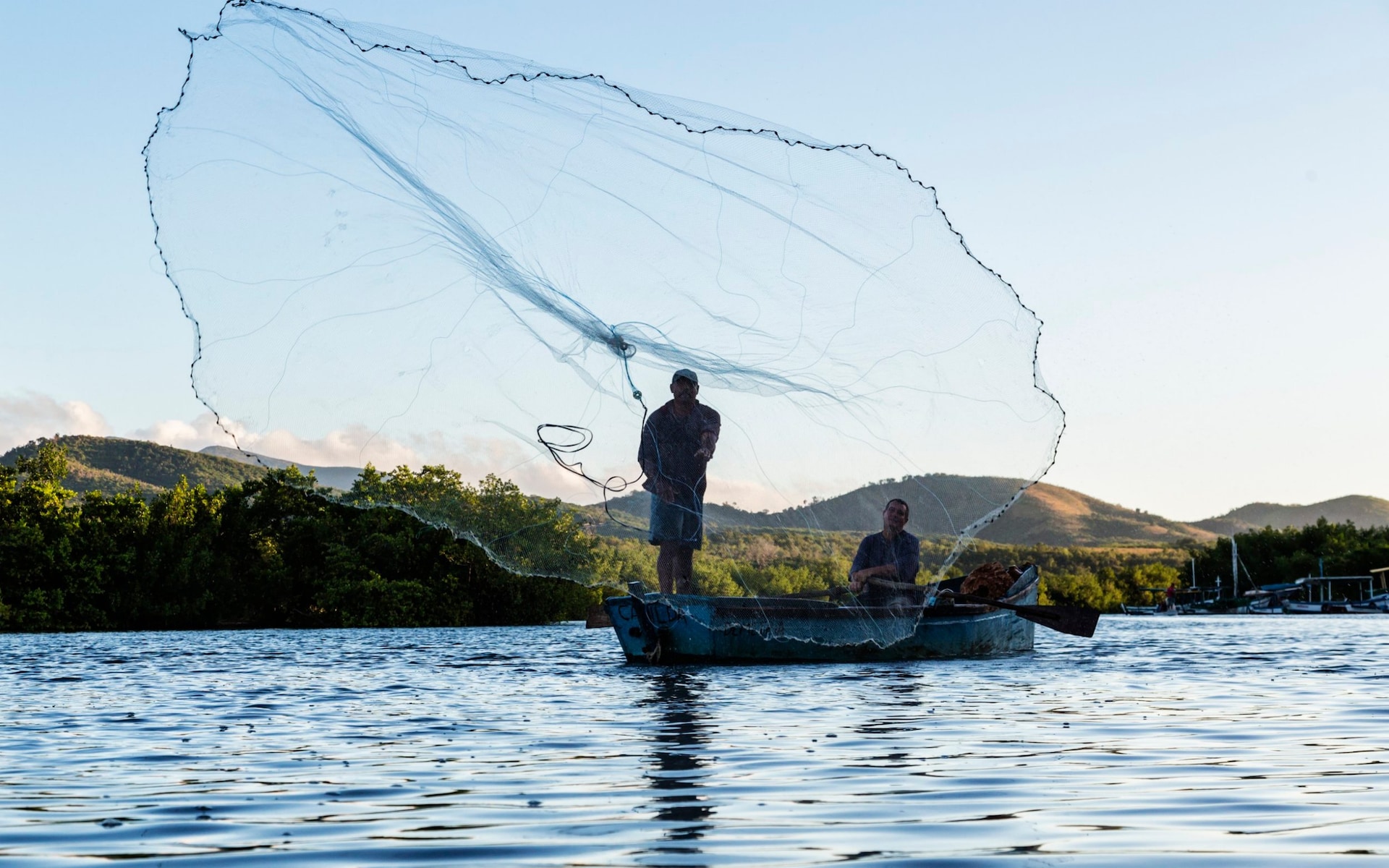 Fishermen from Trinidad are under threat from marauding pirates
and the corrupt Venezuelan coast guard
credit : Jeremy Woodhouse

From The Telegraph by Colin Freeman

With rich Caribbean fishing grounds on their doorstep, the villagers of Cedros in Trinidad are never short of fishermen's tales to tell.

The latest stories to do the rounds though, are not about record-breaking hauls of kingfish.
Today the fishermen themselves have become the catch.

"I was out picking up my nets late one afternoon when a boatload of armed men came at me at full speed," said Brian Austin, 54.
"From about 200 metres away they started firing shots around my boat - it was terrifying.Luckily, I have a high-powered engine, so I managed to speed off, but they took my nets and all the fish in them."

On that occasion, Mr Austin was the one that got away.
Other local fishermen tell tales of being robbed of their boats, beaten, and even kidnapped - all victims of a new wave of pirates sweeping the Caribbean.
Operating with speedboats rather than tall ships, they have made the waters around Trinidad just as perilous as they were in Blackbeard’s day.

As with Mr Austin's ordeal, most of the attacks off Trinidad's coastline take place just before sunset, allowing the culprits to flee under the cover of darkness.
Nobody, though, has any doubt where they escape to - Venezuela, where years of economic meltdown under socialist President Nicolas Maduro has hundreds of jobless fishermen - and in some cases the national coastguard - into buccaneering. 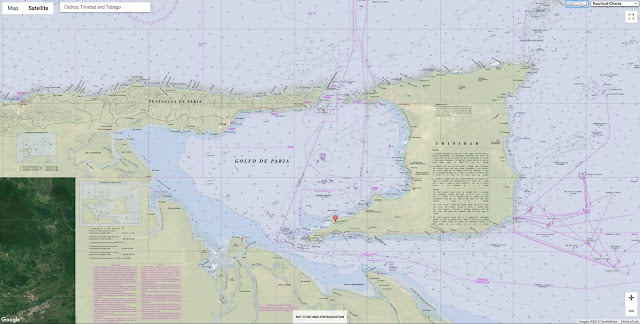 As the southernmost island in the Caribbean, Trinidad lies just ten miles from the Venezuelan mainland, from where the pirates operate out of impoverished coastal fishing towns like Güiria.

Once home to a thriving fishing industry, today Güiria has become a modern-day answer to Hispaniola, the Caribbean pirate haven of the 17th century.
Many of the pirates are thought to be ex-employees of Venezuela’s tuna fleet, which collapsed after a disastrous nationalisation program imposed by Mr Maduro's predecessor, Hugo Chavez.

"Güiria is now a very bad place," said Jose Gonzalez, a computer technician who left the town to seek work in Trinidad two years ago.
He spoke under a pseudonym, fearing reprisals for criticising Mr Maduro’s government.
"It is a real shame - the hardship there has changed the people's mentality." 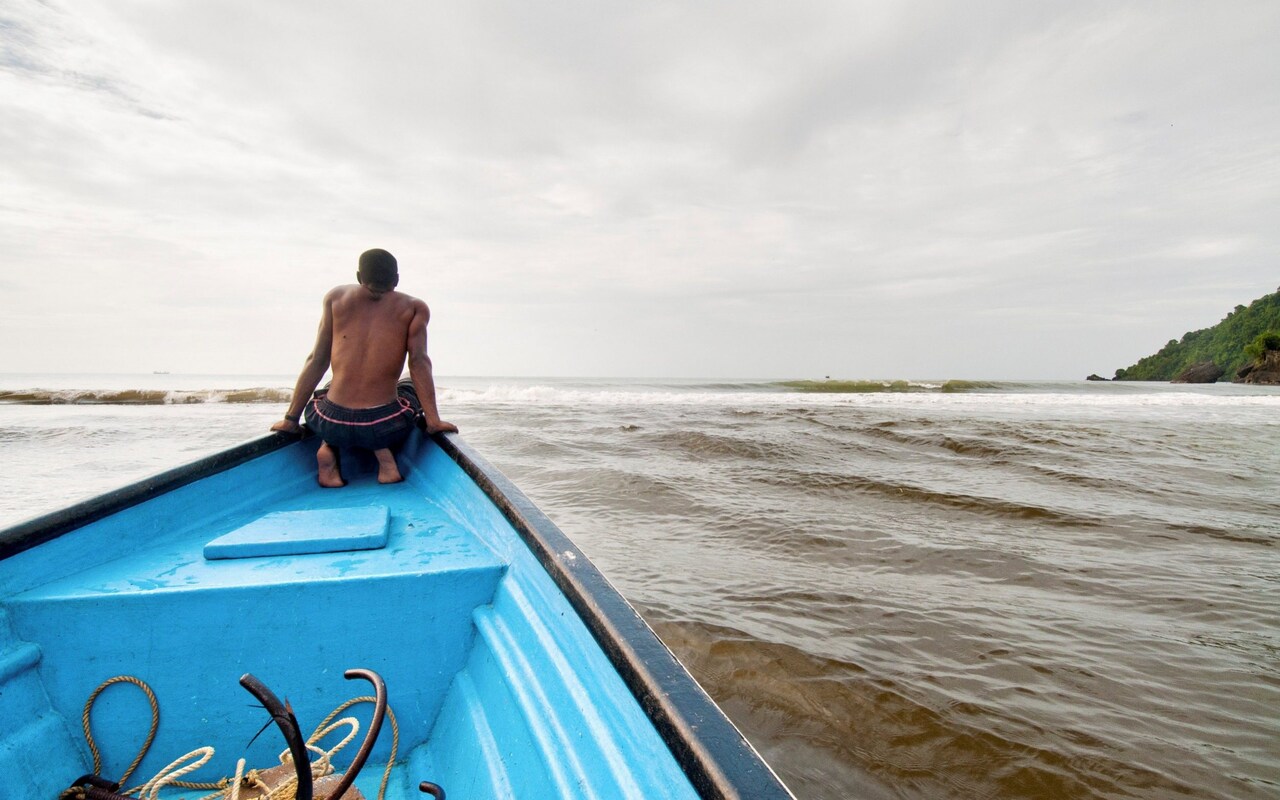 Fishermen in Trinidad are falling prey to pirates from Venezuela

Güiria’s lurch into sea banditry has echoes of the Somali piracy crisis, where impoverished fishermen likewise turned to hijacking passing vessels after the country's collapse in the 1990s.
But while the Somali pirates ranged far out to sea to hijack huge cargo ships, the Venezuelan pirates have so far stuck closer to shore.
That means most of their victims are fellow fishermen from Trinidad, who are not much wealthier than they are.

"I've had my nets stolen three times now, which has cost me about $120,000TT (£14,000)," said Mr Austin, who has now given up fishing as a result.
"These waters are becoming very dangerous, and it's us hardworking fishermen who are paying the price."

In the nearby Trinidadian village of Icacos, a short drive from Cedros through groves of coconut trees, Esook Ali, a local fishing association leader, said hijackings now took place nearly every week.

"Sometimes they just get robbed, other times they are taken to the Venezuelan mainland and held prisoner until a ransom is paid," he said.
"The ransom demands started off at just $5,000 or $10,000, but last week we had one for $33,000.
People round here struggle to afford that.
We've asked the coast guard for escorts but they've given us nothing." 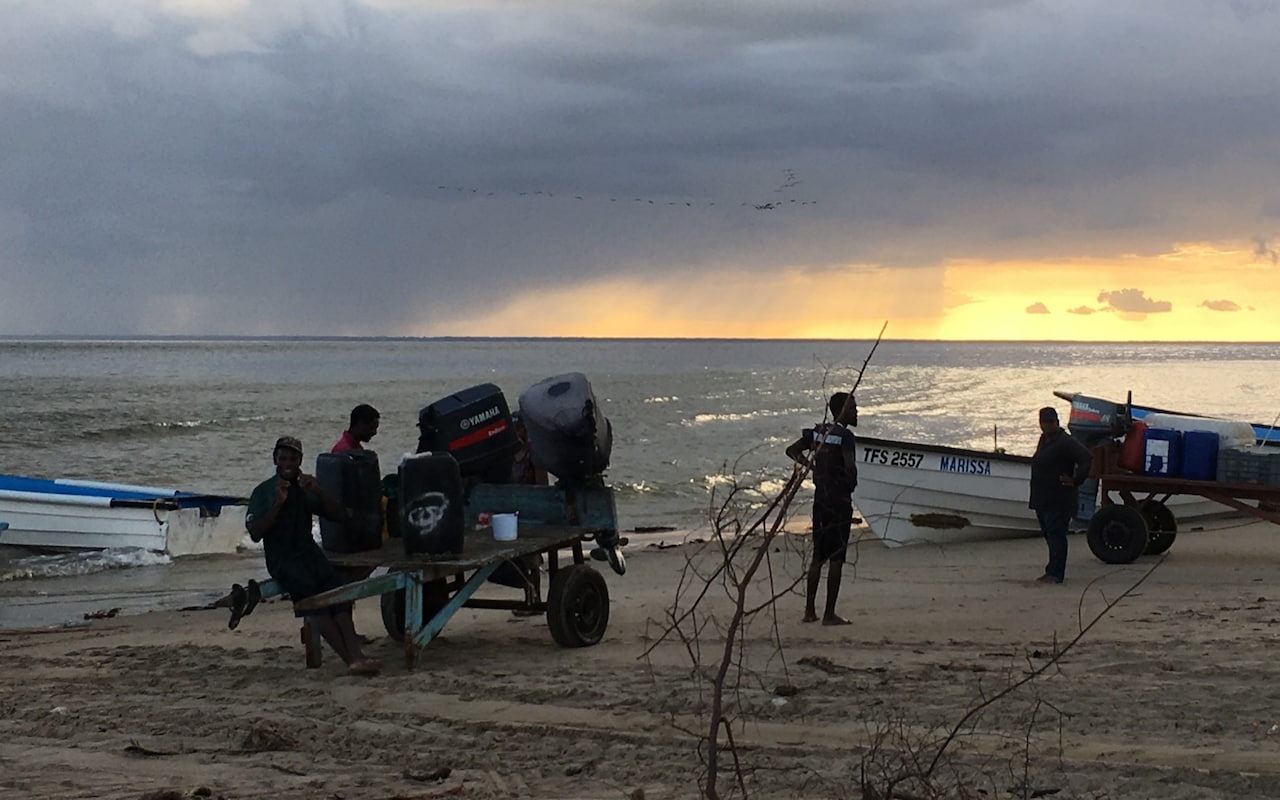 Many of the pirates are thought to be ex-employees of Venezuela’s tuna fleet, now bust under the socialist regime's mishandled reforms
credit : Colin Freeman

The pirates are also prolific smugglers, running boatloads of cocaine and guns from Venezuela into Trinidad.
Many of the firearms are thought to have come from members of Venezuela's underpaid security forces, who sell them to make ends meet.

The same smugglers then return to Venezuela loaded up with stockpiles of nappies, cooking oil, and rice - all of which are now in desperately short supply back home.
Since hyperinflation hit of more than 1,000,000 per cent, such basic commodities can fetch up to four times their value on Venezuela's black market.

In a sign of frayed Venezuela’s institutions have become, hijackings are also being carried out by Venezuelan coast guard patrols, who arrest Trinidadian fishermen on trumped-up charges of illegal fishing.

"We were fishing in Trinidadian waters one day when the Venezuelan coastguard came and told us we'd strayed into their waters, even though we were nowhere near," said Vijay Hajarie, 53, from the Trinidad village of Fullerton, where long fishing pirogues line the beach.
"They said we could either pay $3,000 there and then or we'd be taken to jail."

Unable to pay on the spot, Mr Hajarie and his crewmates ended up spending seven weeks in a squalid Venezuelan prison.
"It was terrifying - we were ordinary fishermen in with hardened criminals," he said.
"Our families eventually paid a fine of $500 to get us released, but our boat was confiscated." 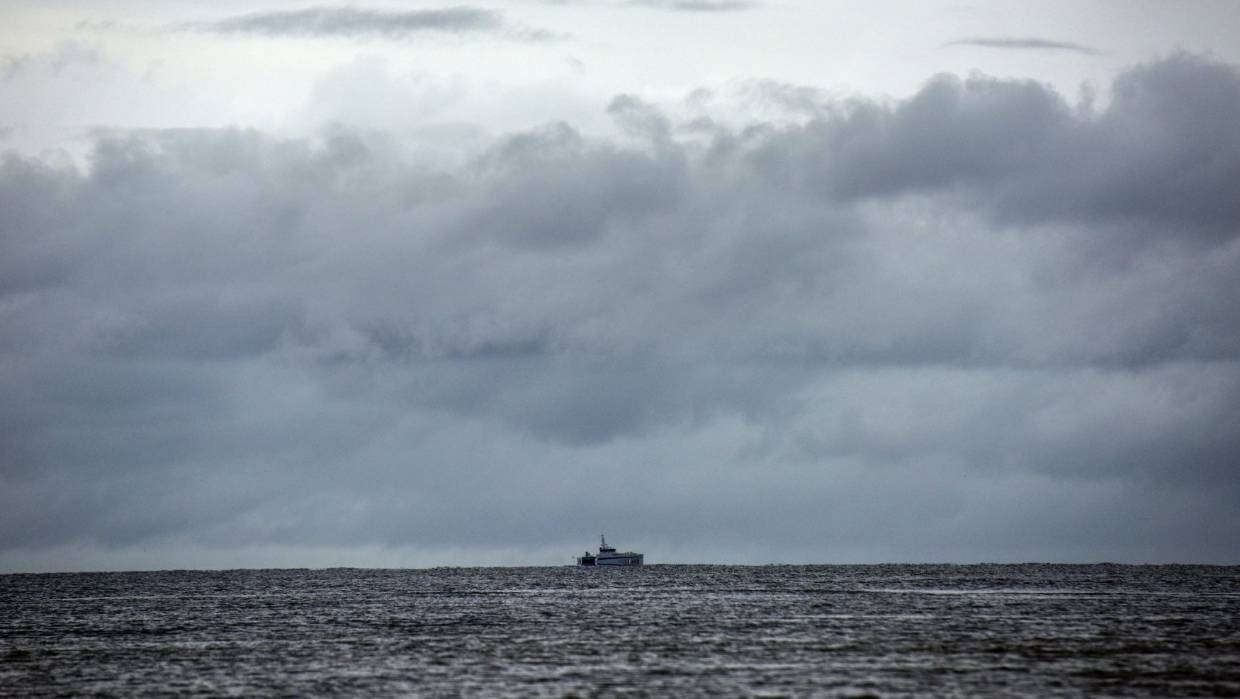 A Trinidadian coast guard vessel patrols the Gulf of Paria between Trinidad and the east coast of Venezuela.
credit : Jahi Chikwendiu (WP)

To counter the threats, many Trinidadian fishermen have taken to only fishing only at night with their lights out.
Others have upgraded their boat engines from 75hp to 200hp, to improve their chances of a swift getaway.

But it is not just Trinidad's fishing communities who are worried.
The island’s police fear that the influx of drugs and guns is fuelling violent crime, already near an all-time high.

Despite its tourist-friendly image, Trinidad's capital, Port of Spain, is home to numerous tough ghettoes.
In slums like Laventille, where Trinidad's steel pan music was born, army and police patrols were increased back in the summer to quell a long-running gang war, which pushed this year's annual murder tally to more than 500.
Given that Trinidad has just 1.3m people, it makes the murder rate roughly 20 times that of London.

Thanks to the island's proximity to Venezuela, it is already a staging post for Latin American cocaine cartels supplying Europe and America.
In 2014, US officials blamed the assassination of a Trinidadian state prosecutor on "transnational" drug cartels, some of whom are believed to have local police and coast guard officials on their payrolls. 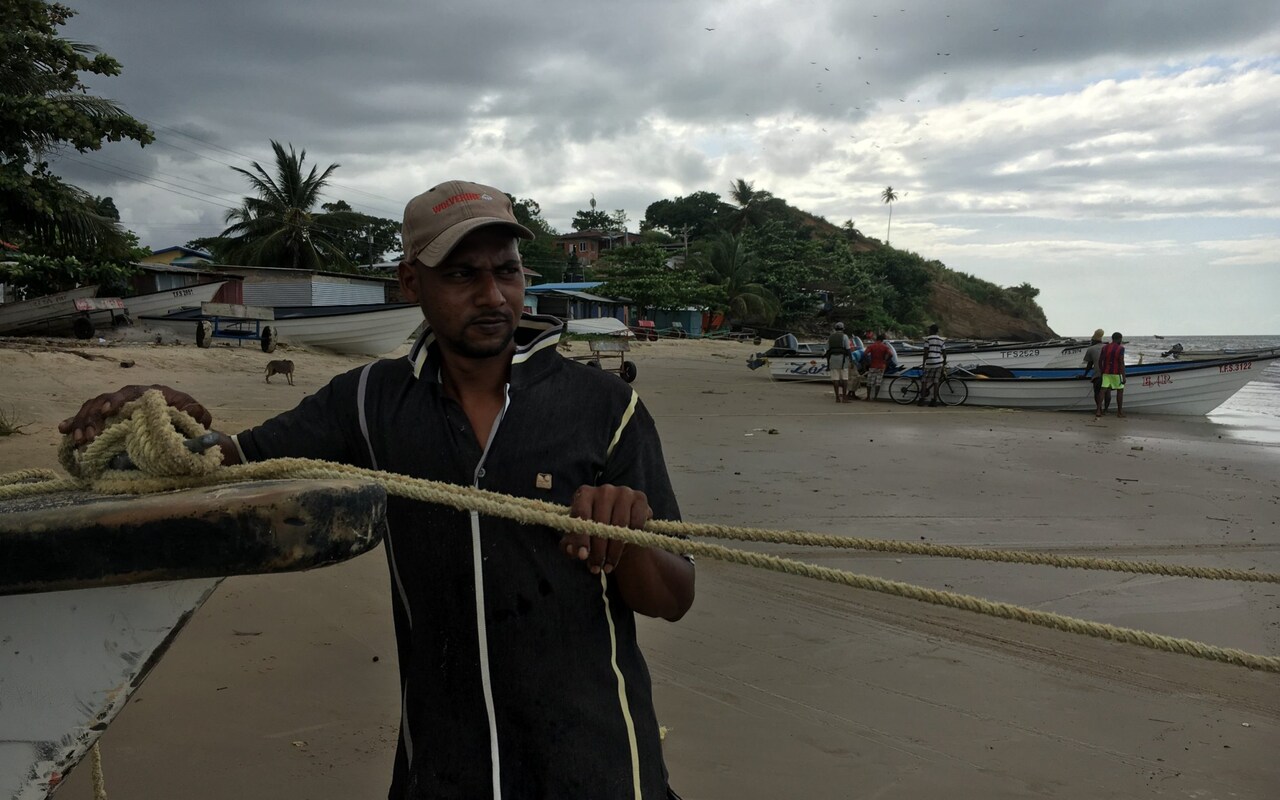 In August, amid rising public concern about the crime rate, the government appointed a former soldier, Gary Griffith, as a new-broom police commissioner.
He has already won acclaim by vowing to wage war on the gangs, declaring: "If they have no fear of God, I will make sure they have a fear of Gary."

Even his supporters, though, concede he has an uphill task.
While local police now make regular seizures of Venezuelan drugs and weapons stashes, they are believed to be only a fraction of the total.
According to a former British police advisor to the Trinidadian government, corruption is a serious problem.

"When I was there, the police said that some of their own officers were bringing drugs in," the advisor told The Telegraph.
"The average policeman's pay is a pittance compared to what the cartels will offer."

Meanwhile, there seems little prospect of an end to the crisis in Venezuela, where the US placed fresh sanctions on the government earlier this year after accusing Mr Maduro of winning a second term by vote rigging.
With the currency now worthless, shops and hospitals empty of food and medicines, and with opposition parties banned, many now fear a civil war.

Already, more than 3 million Venezuelans have fled abroad as refugees, an estimated 40,000 of them to Trinidad.
"The only way Maduro will go now is by blood," added Mr Gonzalez, who is now scratching a living as a watchman in a Trinidad marina.
"Life is hard here, but it's better than Venezuela - there every day is hell."