Off the chart: the big comeback of paper maps 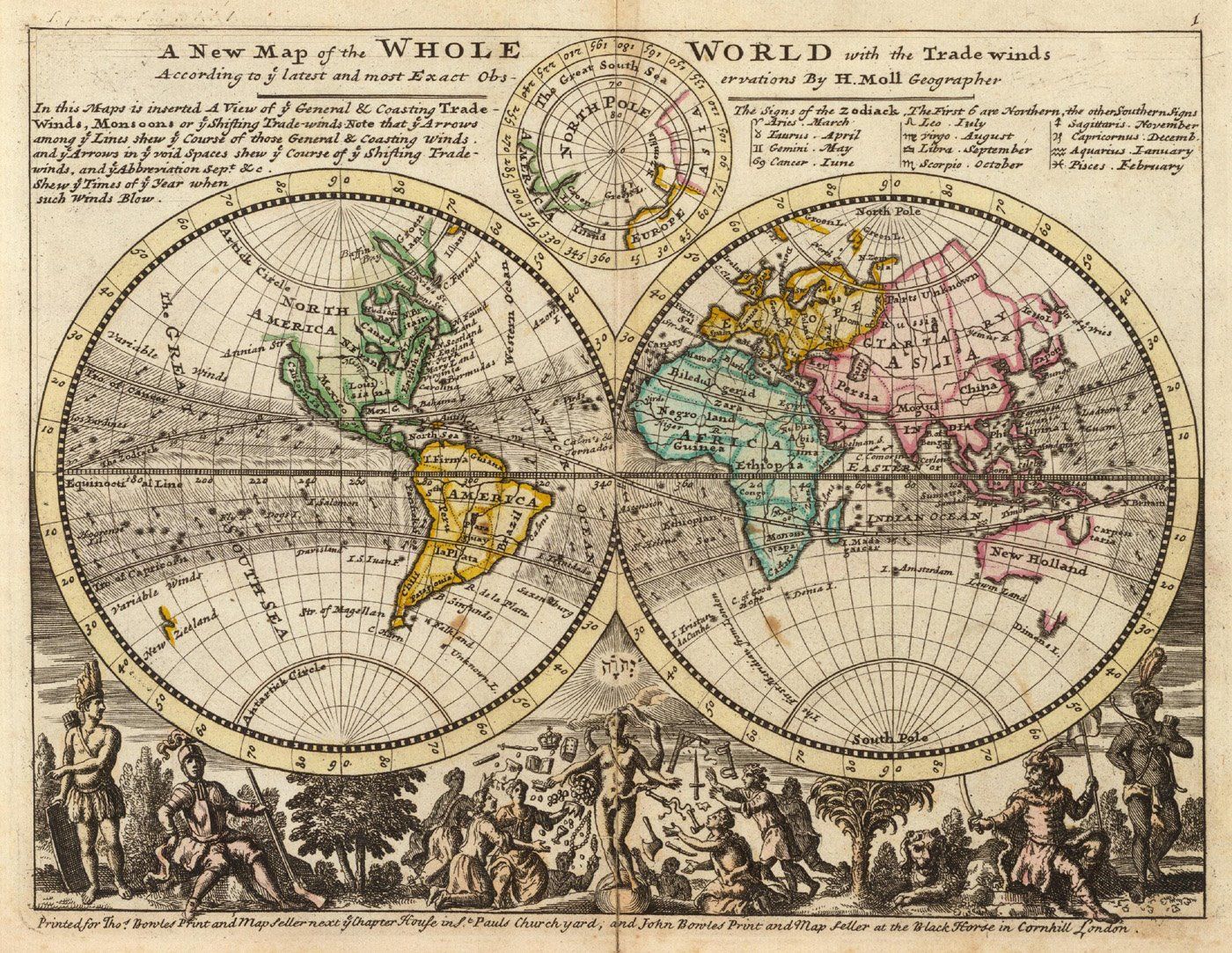 Back in the fold … paper maps are enjoying a renaissance, with technology helping to element the frustration of the creases getting in the way.
Image :
18th century World map with the trade winds from the German or Dutch cartographer Herman(n) Moll first published in England 1719.
Picture from Atlas Minor, edition London

From The Guardian by Kevin Rushby

As Stanfords travel bookshop moves into new London premises after 118 years, its cartographer explains how the ability to tailor-make any map is keeping their magic alive.

When I was living in Yemen during the 1980s, someone gave me a battered old map.
Information was scarce then, and accurate maps were extremely hard to come by.
So departing expatriates tended to pass on any treasures to new arrivals.
As he did so, my benefactor paused.
“Be careful,” he said, “You don’t want to get caught with this.”

Maps, you see, can be dangerous.
I think of this when I meet Martin Greenaway, a cartographer at Stanfords in London.
Martin is sitting by a couple of computer screens behind a treasure trove of maps: tables covered in vast colourful countries, wall racks groaning with continents, drawers stuffed with cities and mountain ranges.
Stanfords has been making maps since the mid-1850s, and has operated from this purpose-built site on London’s Long Acre since 1901.
Now it is moving on – opening new premises in nearby Mercer Walk on 10 January.

Martin laughs at my Yemen story.
“A customer came in and told us how, in the 1970s, he pulled out a 1:50,000 map on a bus and got into trouble with a Spanish secret policeman sitting next to him.
Now we sell those same maps to walkers.”

And do many still buy them, I ask.
Isn’t the internet killing the paper map?

“GPS and Google have certainly eaten into the market,” he says, “But I think paper is going to make a comeback.
You just cannot orientate yourself as well with a handheld device.”

‘In a time when facts are to be treasured, perhaps paper maps have real significance.’ Martin Greenaway in the map room at Stanfords 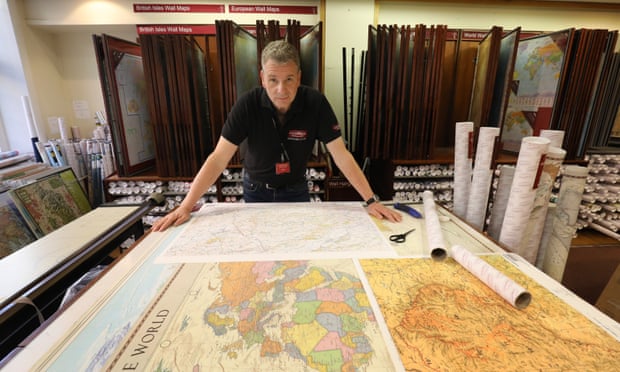 Part of the reason for this possible comeback is that Stanfords can now print any map you need, centred on the place you choose, at a scale that suits your purpose.
Martin takes me through the process.
“You know how the hike you want is often at the join between two or more maps? We simply re-centre it and print it for you.”

I’m reminded of the OS Explorer maps for the Lake District.
Four sheets, all of which manage to fail miserably for anyone doing a walk centred on where they meet, roughly Grasmere Common.
Now there’s a solution for someone like myself, a folded paper aficionado.

And who buys such maps?
“All sorts: a man who was researching an ancient pilgrim footpath in Italy got me to create a whole new map for it; a canoeist doing the Yukon River needed something similar.
We get homeowners who are in boundary disputes, pilots – and a lot of people who can’t get maps in their own country.”

That interests me.
Many years ago I bought a map in Stanfords for a journey in Sudan.
I knew I wouldn’t find anything like it once I was there.
Repressive regimes around the world have always wanted to limit cartographic freedom.

Martin nods.
“We had one man who wanted a street map of Homs in Syria.” 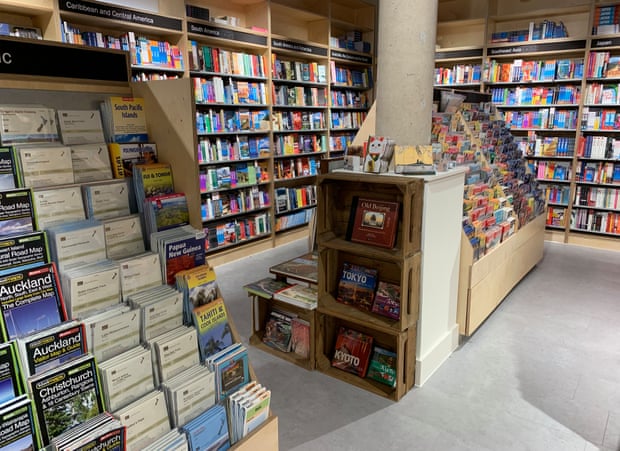 In a time when facts are to be treasured, perhaps paper maps have real significance, recording as they do a version of the truth less susceptible to tampering and fakery.

Martin quickly demonstrates the opportunities and limitations of digital mapping by pulling up all the information he has on Yemen’s capital, Sana’a.
It’s not a lot.
“This is Open Street Map, a website that uses GPS data from contributors’ phones to build maps.”

Home in on our own current location and the quality is good: every shop and alleyway in London’s Covent Garden is accurately plotted.
Move to North Yorkshire and a footpath I’ve recently walked in the Howardian Hills is totally absent. 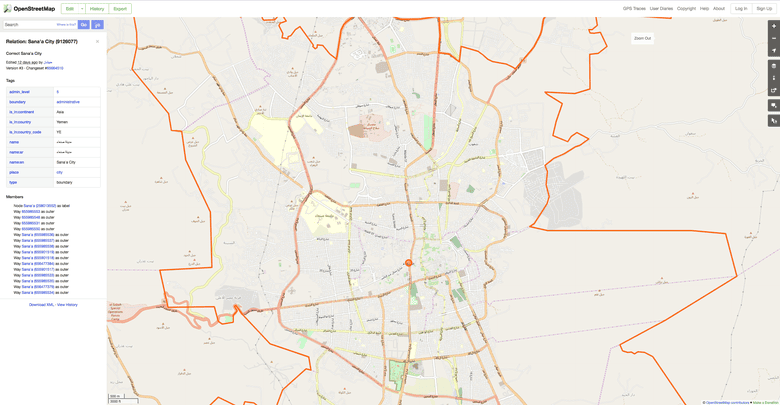 Not that paper is infallible.
The Ramblers is currently running a volunteer project called Don’t Lose Your Way, the purpose of which is to recover lost rights of way that somehow failed to make it on to maps.
Its conservative estimate is that England and Wales are currently missing about 10,000 miles of footpaths on what are intended to be the definitive maps.
These are held by all local councils and used by organisations including Ordnance Survey.

Martin himself clearly delights in the new technology but his love of paper has a practical aspect.
“I trained as a pilot when I was a teenager and we still need those paper maps.”

He flies a lot in Canada, relishing the remote regions where many lakes remain unnamed, and where if geographical features have a name, they tend towards the bizarre.
“My favourite is an escarpment in Alberta called Head Smashed In Buffalo Jump.
Mind you, the UK is pretty good: you’ve got places such as Cold Christmas and Unthank.” To which I can add, from personal experience, Wetwang and Slack Bottom. 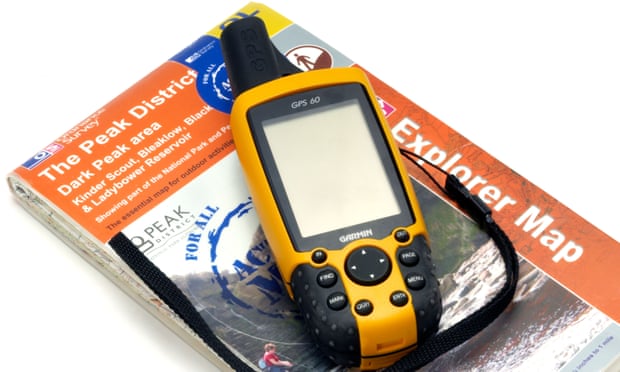 Map and gps unit
For Stanfords’ Martin Greenaway the combination of a paper map and a GPS device (plus a compass) remain key.
Paper: The mapping technology that won't run out of battery.
Photograph: Alamy

We go through the process of printing a map: I choose an OS Explorer-style production with my own house bang in the middle.
Handy for walks straight from the door.
Martin bumps up the scale a bit.
“It’s amazing how much more you see in a map when the scale is changed from 25,000 to 12,000.
There’s no more information – we can’t add that – but you do spot things you’d previously missed.”

We move to the formidable printing machine and load up with the paper of my choice, then watch as woods, streets and rivers roll out.
Next to us is the map of London’s streets that taxi drivers use when learning The Knowledge.

This formidable task is all the more fascinating at a time when the effects of the digital era on humans’ mental map abilities are becoming apparent.
A recent study at the University of Montreal found that some video games that relied on non-spatial strategies could reduce growth in the hippocampus, an all-important region for mental mapping.
The dangers of digital maps, it seems, could be inside your own head, rather than in the secret policeman sitting next to you.

Martin keeps both options.
“I always carry a GPS, a paper map and a compass.” 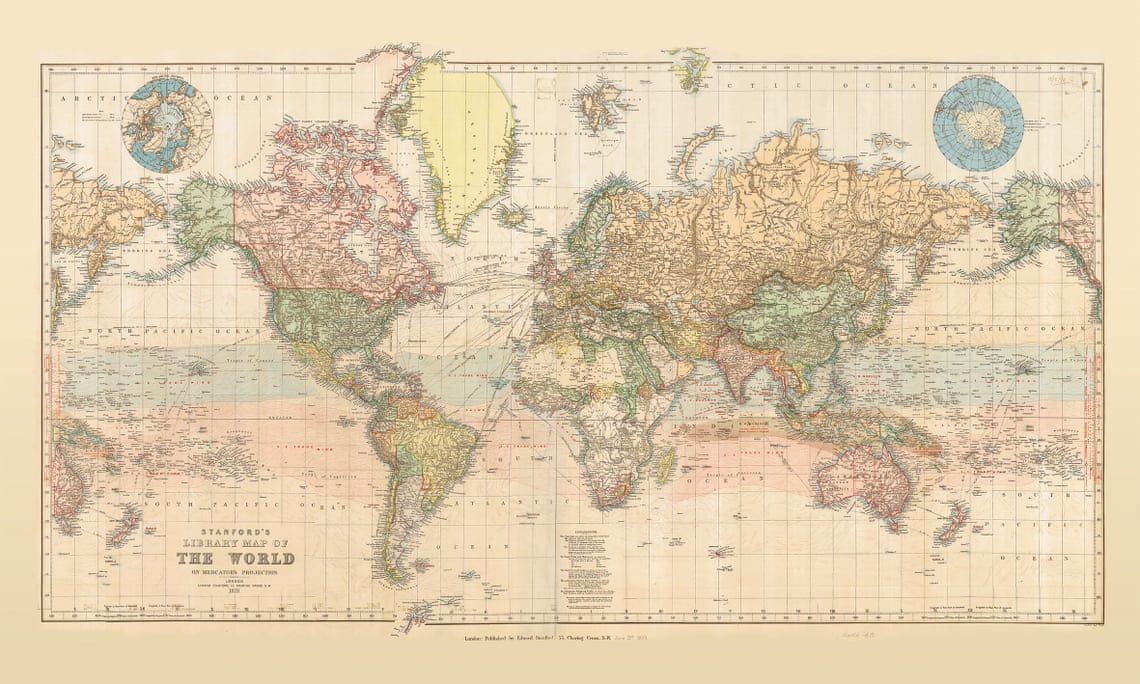 Map of the world published by Edward Stanford in 1879 shows the zones of trade winds which for centuries determined the routes taken across the oceans by ships like the Cutty Sark and other clippers.
Presented in lovely pastel colours, the map offers a great deal of interesting information both on land and sea.
Across the oceans in addition to the zones of trade winds it also shows the regions of calms and monsoons, the direction of currents, principal “Ocean Mail” routes annotated with distances, and submarine telegraph cables.
On land countries are shown in different colours, with their borders emphasized by stronger tints. Given the date of the map’s publication, much of Africa is still not colonized and Europe too is very different from today.
In terms of typography, main mountain ranges are shown by hachures and the map has a surprisingly large number of place names.
Eastern Siberia with Alaska and New Zealand with most of the South Pacific are shown on both sides of the map for more convenient presentation of that part of the world.
Two insets show the Polar region, with much of the coast of the Antarctic still to be properly mapped. Latitude and longitude lines are at 10° intervals; the map is drawn on a Mercator projection.
Additional features include time difference from the Greenwich Meridian and a calendar showing the progress of the sun within the Tropics.
photo : Standford

I ask if he has a favourite map.
“Stanford’s 1871 world map, showing the trade winds.”
He fishes out a copy from one of the wall racks and we gaze in wonder at the colours and textures.
“It’s a work of art.”

It seems that paper maps will always trump digital in one important respect: beauty.